A proposal that focuses on water as a resource to escape from daily life. Not only in the humanistic sense of escaping from the vicissitudes of living, but also from a physical escape, to another place, outside the urban setting. 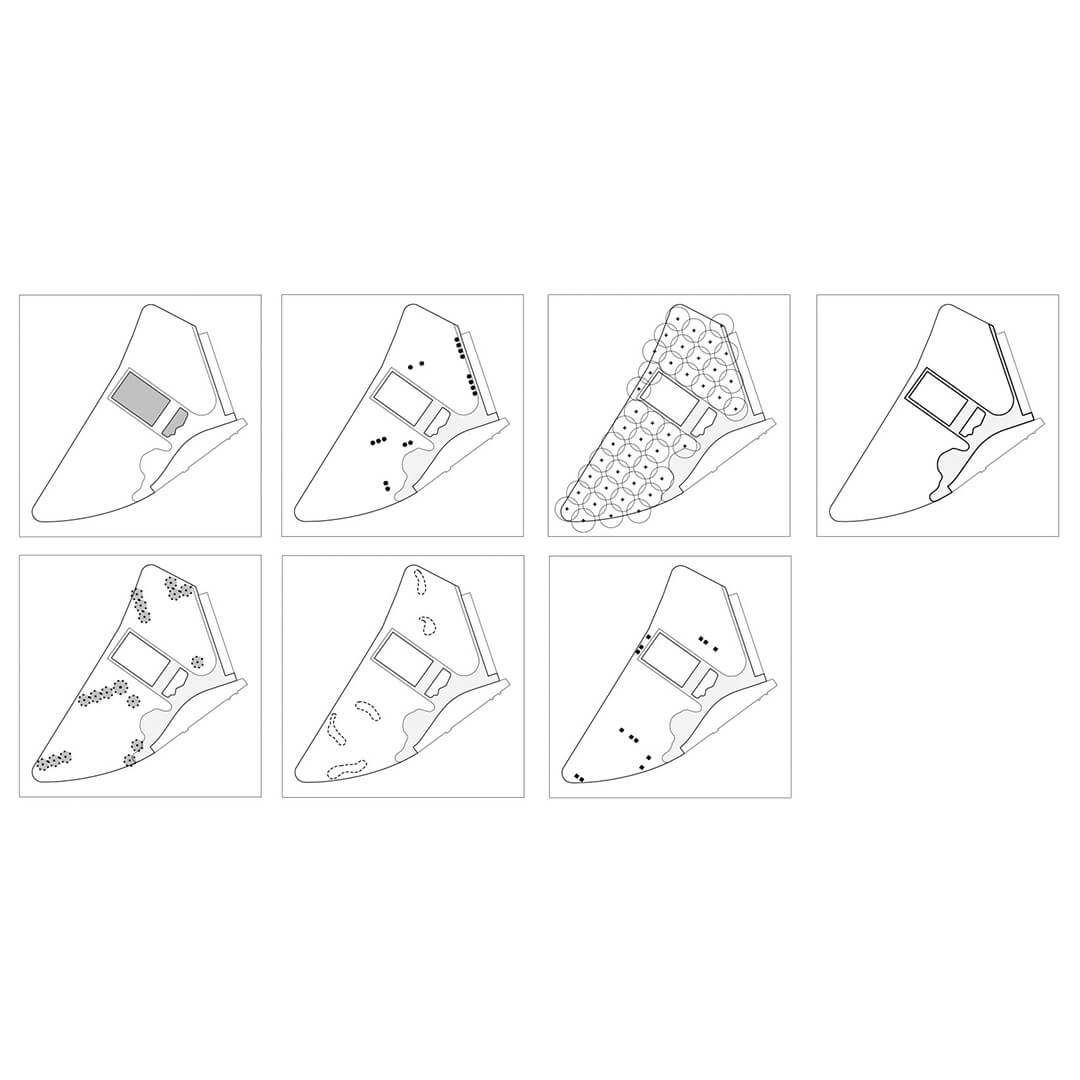 The municipal swimming pool has not always belonged to the cities. In rural areas, aquatic leisure was celebrated (and is celebrated) in natural water bodies, such as rivers, ponds, lakes or dams that, in their natural condition, were outside the population centers and, as such, they promised a getaway, an adventure away from home. In turn, belonging to the place is key. Critical regionalism is an articulating principle in this proposal, which arises as a criticism of the destruction of structures in contemporary architecture by multinational companies, that whatever their positive aspects, they end human ties, without meaning to stop aside the current construction techniques that facilitate and favor architectural production. In the words of architecture critic Kenneth Frampton:

“The fundamental strategy of critical regionalism consists in reconciling the impact of universal civilization with elements derived indirectly from the peculiarities of a concrete place.”

For this reason, it is important that the materials, construction techniques and solutions that are used resonate in a certain way with this scenario, thus favoring the use of local materials and producers – which adds up in terms of sustainability and visual and climatic impact. The predominant material will be the Arcosa sandstone, supported by wood, in reference to the traditional constructions of the area. This is why the proposal tries to orient the distribution of the different elements on the plot towards this end. The buildings, although secondary, are a fundamental element to generate this evasion. They are placed as close as possible to Quintanadueñas, for technical reasons of supplies and access, but also to continue belonging to its urban setting. 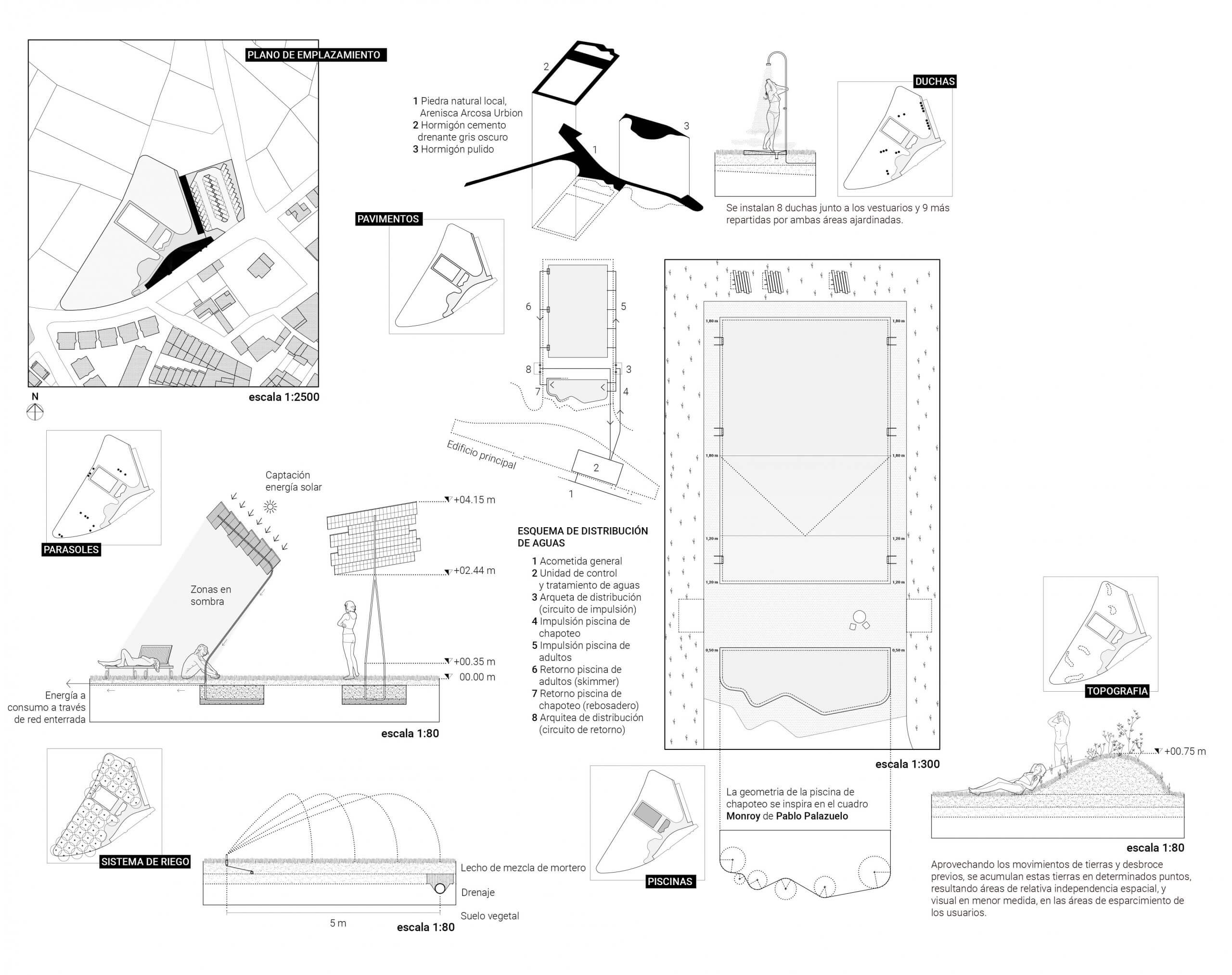 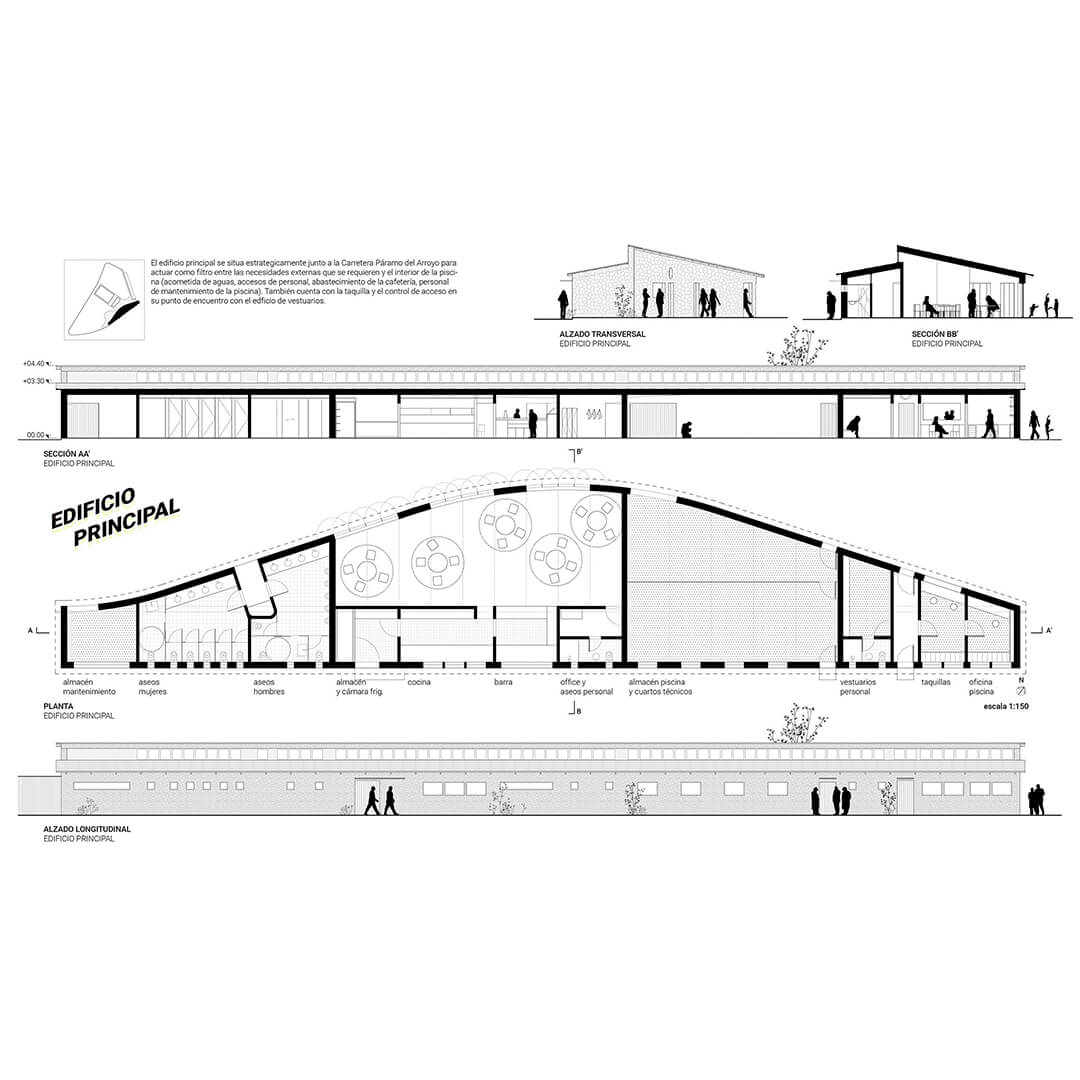 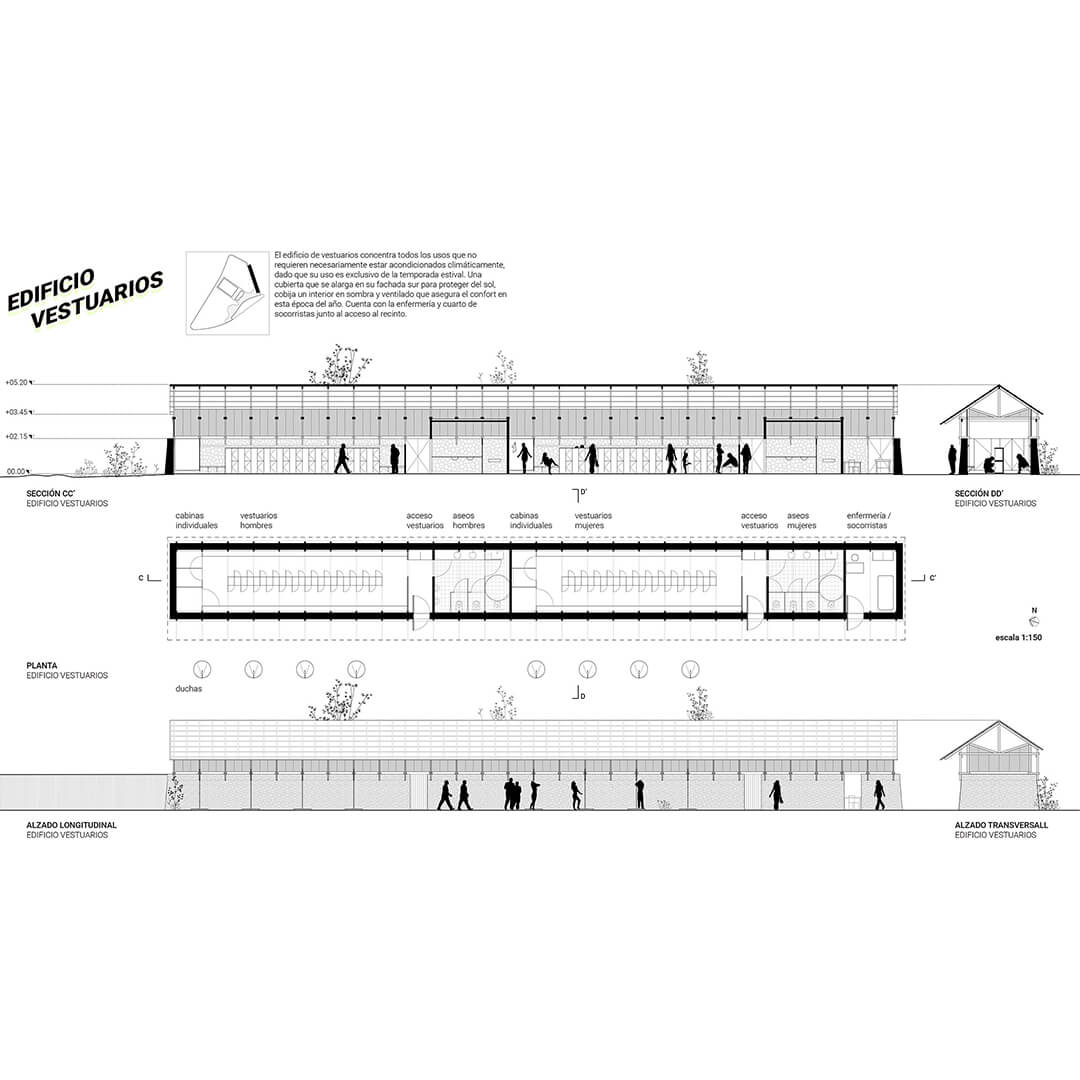 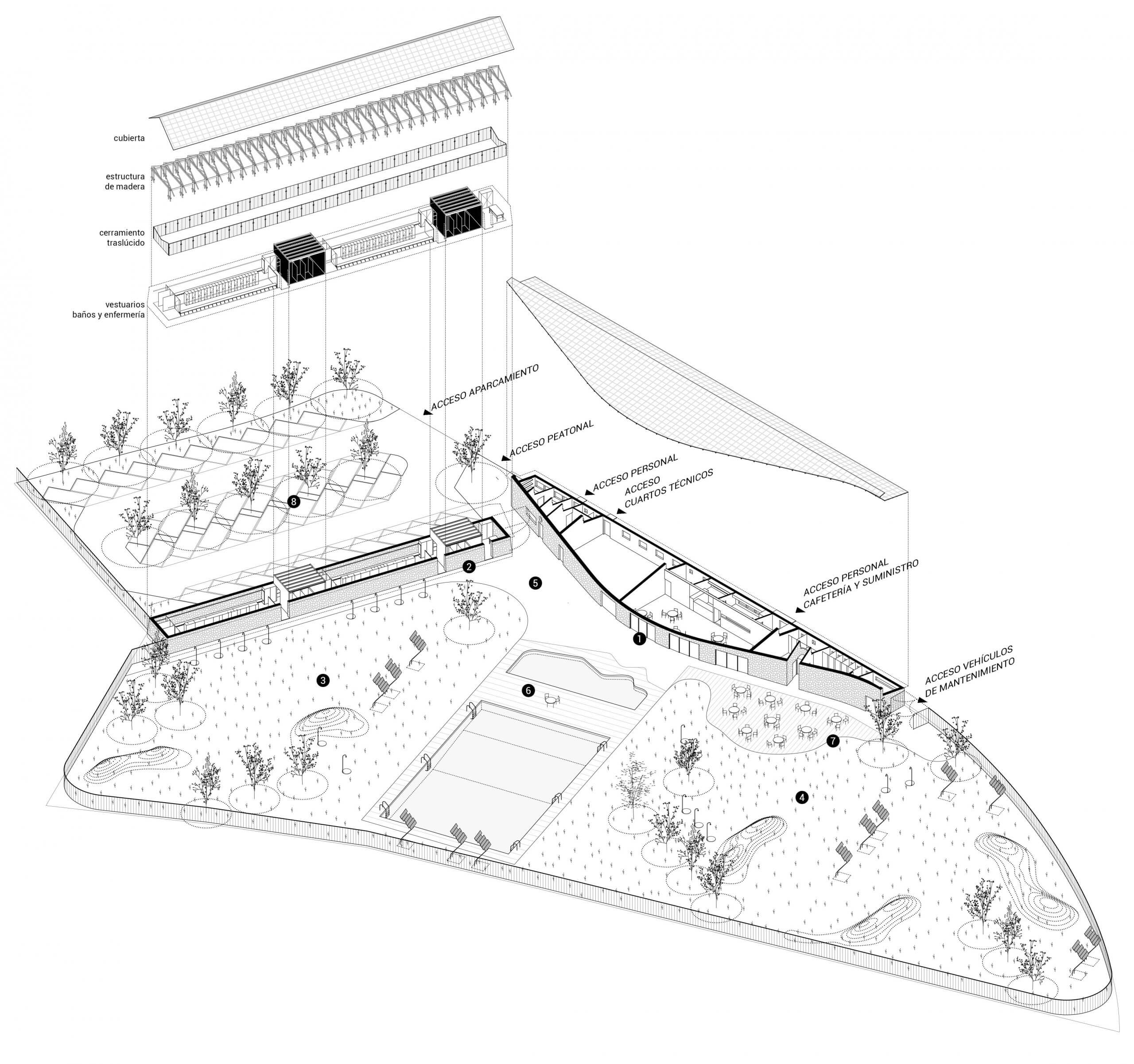 This starting point makes it possible to leave the rest of the plot available for this recreation, coming into contact with the plain of the Páramo del Arroyo that extends as far as the eye can see. This recreational area tries to be what are the natural sheets of water, intermittently occupied by idle bathers who momentarily adhere them to their play space. The program of needs required in the tender specifications, raises a fundamental question for the approach of the buildings in the proposal: we can draw a line between uses that require climate conditioning and others that may be passive in this regard. This guideline has marked the organization of uses in two pieces, one main, low and climatically controlled and the other secondary, slender and climatically free. Thus, the main building brings together all the uses that require this condition and also need contact with the outside for its correct operation (they do not feed exclusively on bathers). This piece works as a filter and in turn as the last front of the population center before the Páramo del Arroyo plain. 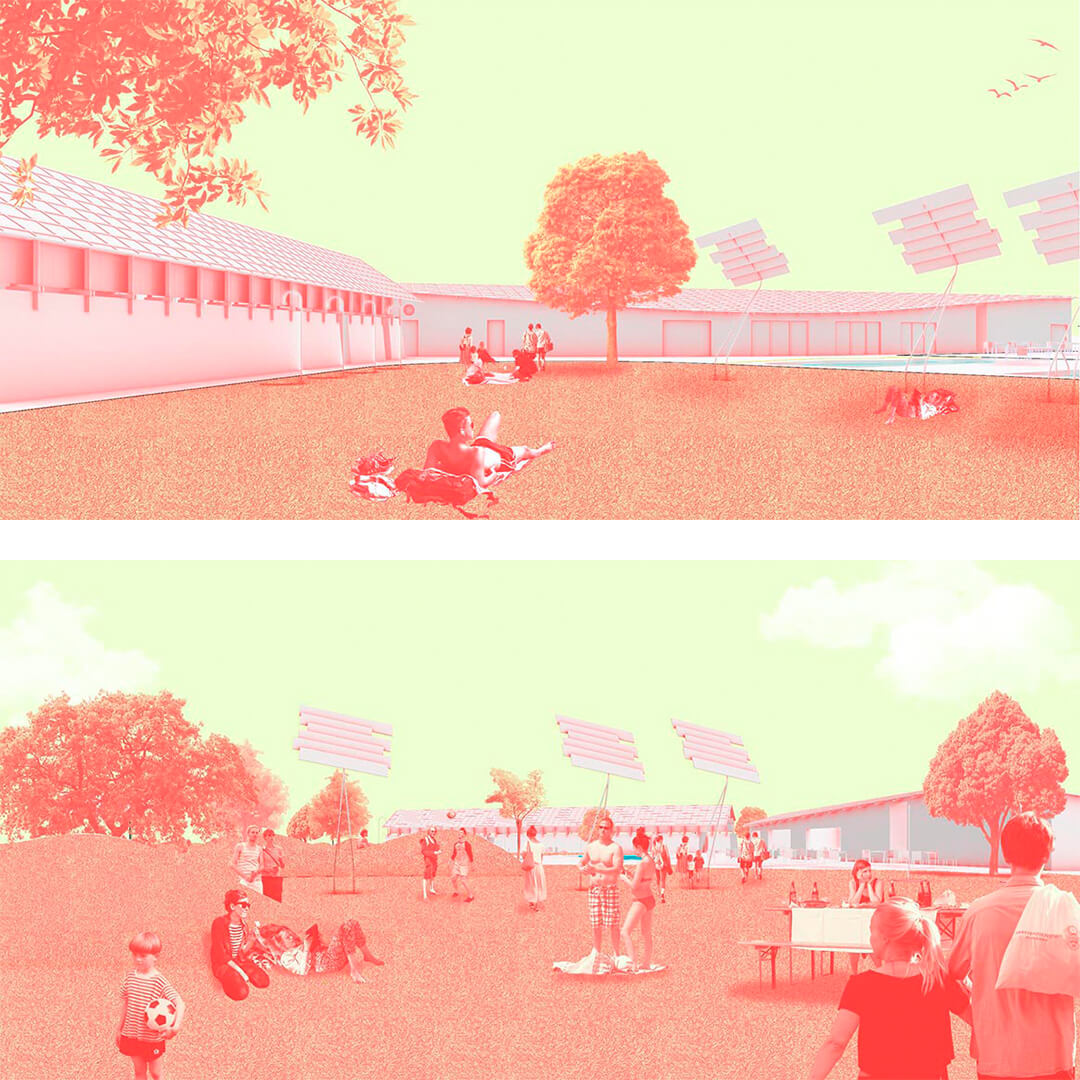 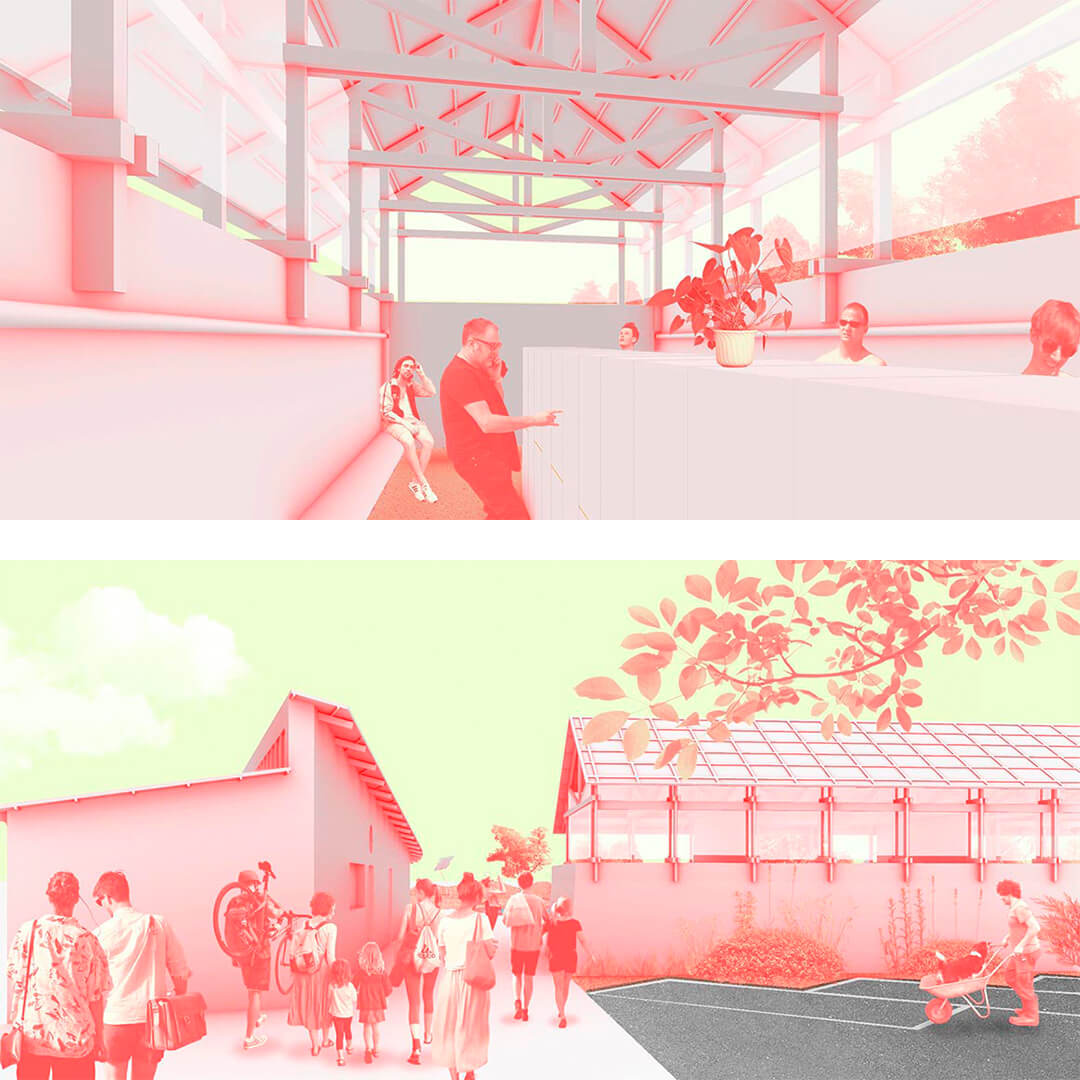 For its part, the wardrobe and infirmary piece penetrates the landscape like a breakwater that juts out into the sea. Due to the seasonal summer use of the swimming pools, this piece does not need the installation of climatic comfort, but only to ensure conditions of air renewal and ventilation. The piece is organized around two boxes, the changing room toilets, which, arranged inside, in turn generate three separate and open areas, which would make up the men’s wardrobe, the female wardrobe and the infirmary. The roof, built on a simple wooden structure, is lengthened on its south side to protect the façade from the sun, closed with translucent panels.