Our project for the Hill of Art provides an unexpected scenario to an already rich and various context of history and pre-existences. 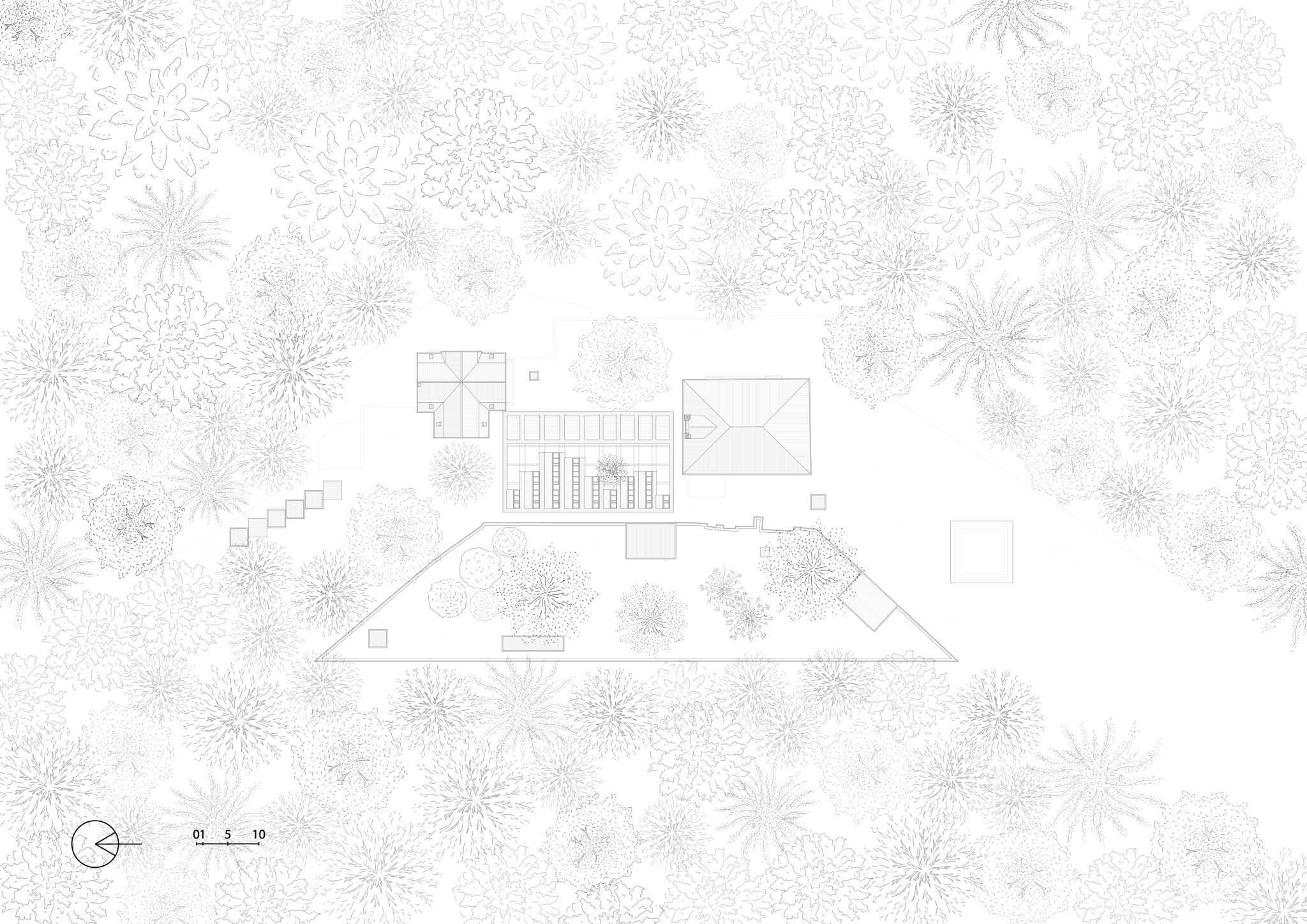 We define a new Courtyard filling an empty space connecting and emphasizing the movement and the relations between the main Villa and her sister. We wanted our intervention as a structure that acts in many ways creating horizontal and diagonal relations, both in plan and section, between the given character of the venue and the new identity of the project.

Dealing with a strong context, a vaste range of elements, a calm chaos made of many nuances, colours, styles, expressions, needs, we simply introduced cascade of thin structural elements, once metal and once concrete, releasing the new glazed perimeter, as light as possible, in order to trap the surrounding and to let the project be part of the environment, in contrast to the existing which is already a contrast itself, a place generated by the coexistence of languages, memories of its era. It has been clear since the beginning that the main Villa was the right setting where to displace the Hotel and its activities; A nice Restaurant where you can taste local food and a glass of Nebbiolo during winter time, and its incredible terrace with a view on Turin where clients can savor a glass of chilled Arneis during the warm season. The higher floors of the Villa host 12 suites, the ‘missing 2’ have been thoughts as ‘luxury bungalows’ somewhere in the forest overlooking the Courtyard. We re-used the basement level connecting the Hotel to a new, large Wellness area designed to give new life to the rough warehouse, taking advantage by its structure: the columns have been released by the curtain walls so offer the clients a marvelous unexpected view on the forest below. 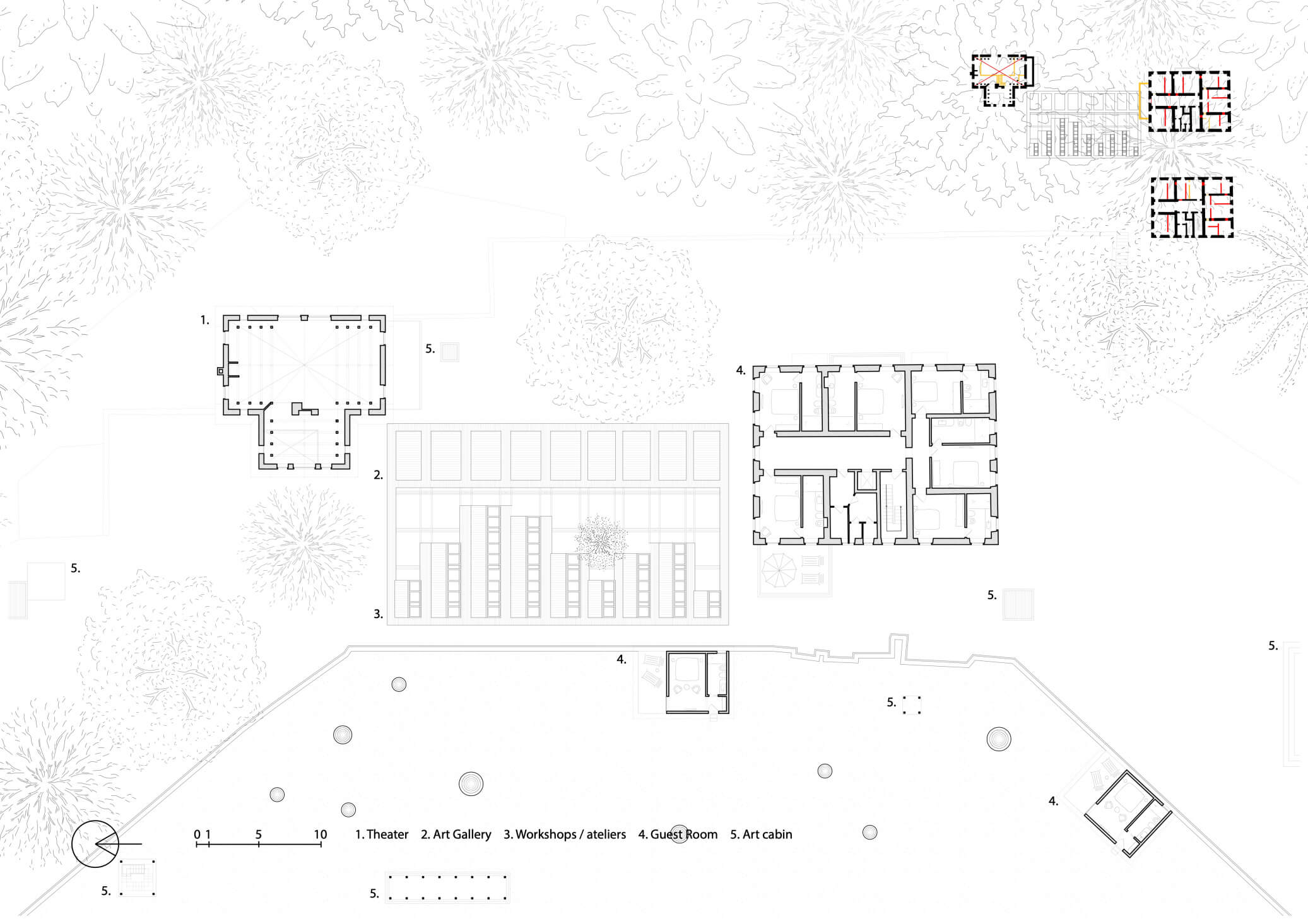 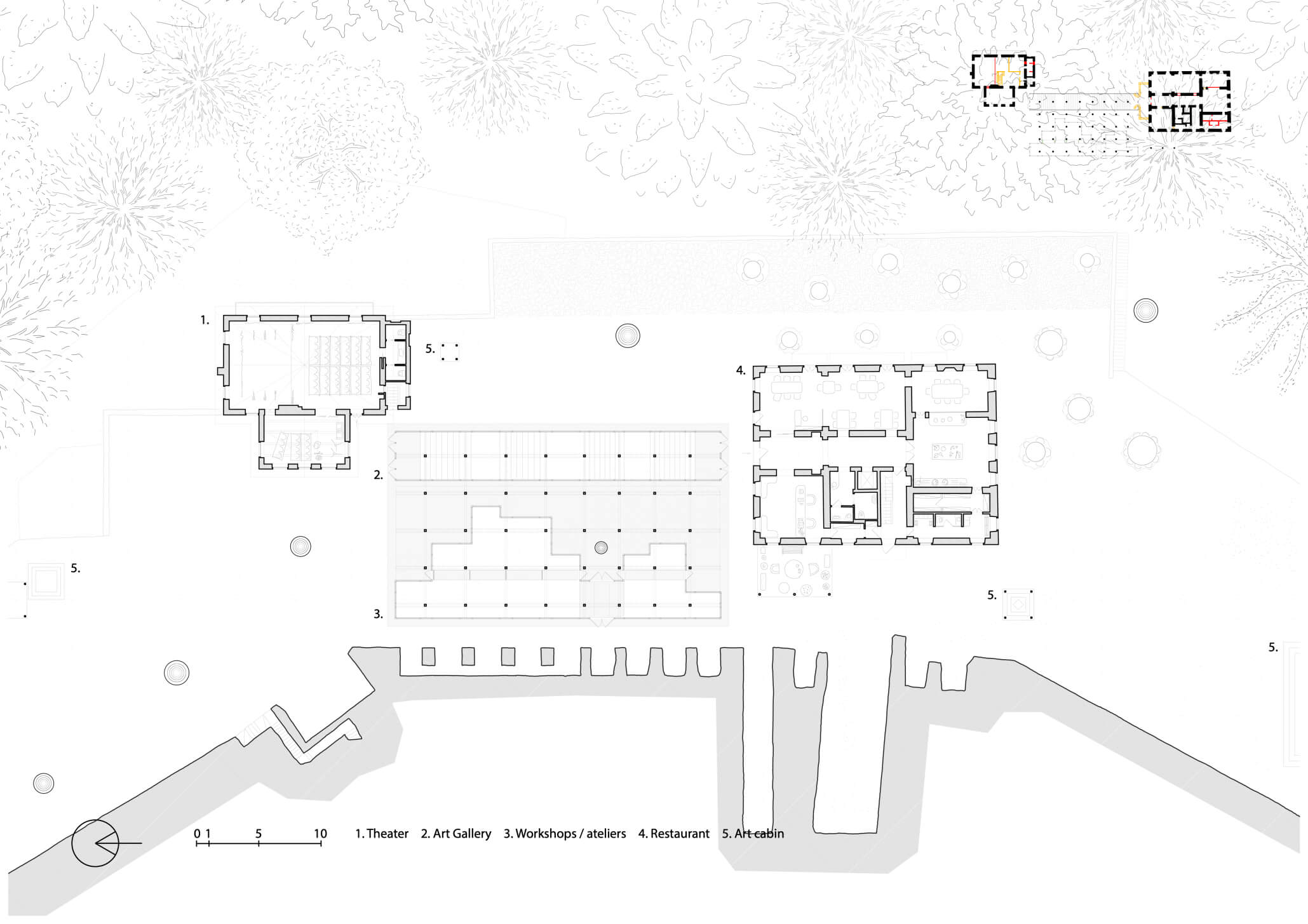 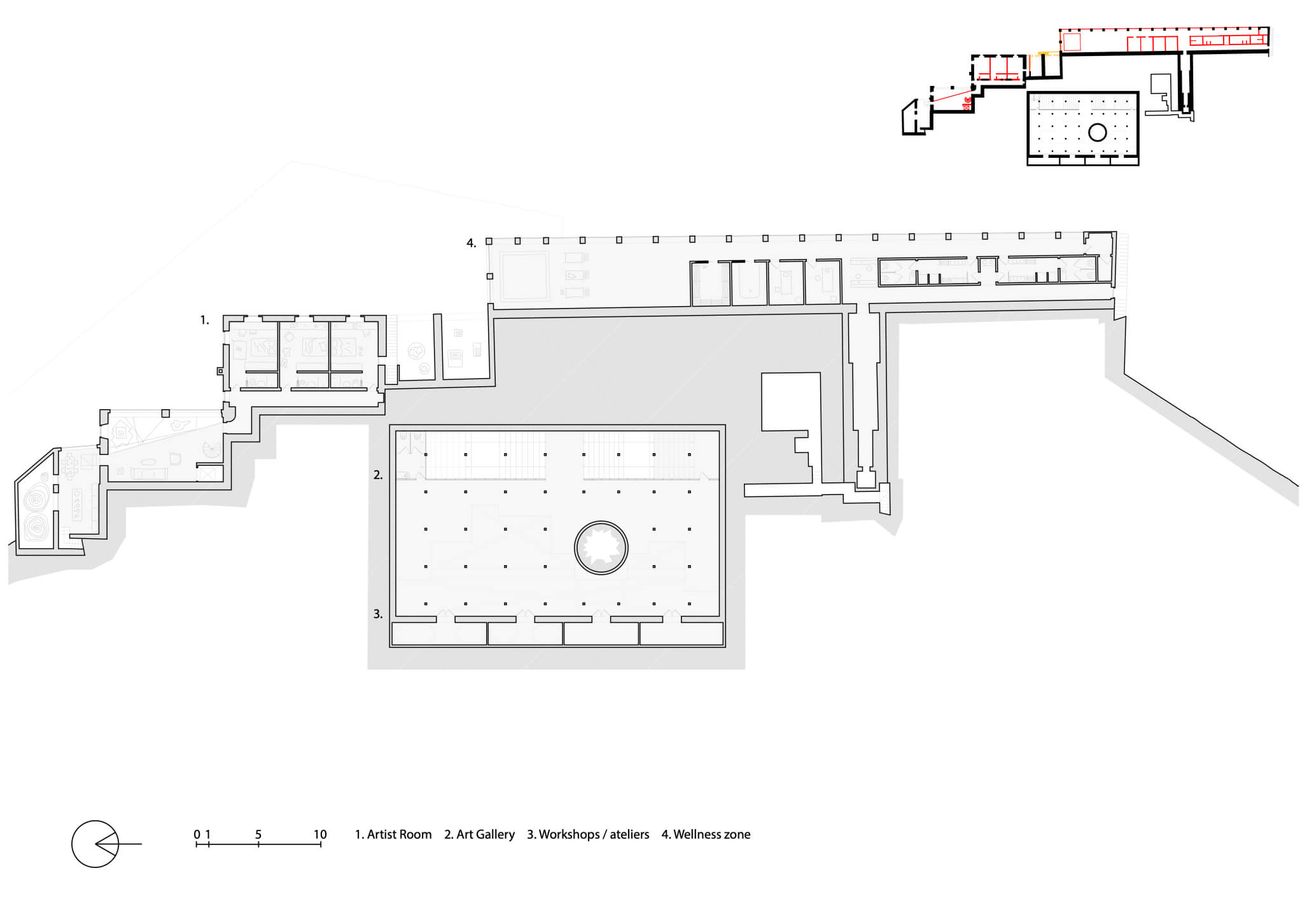 As the Villa represents in our intention a perfect place for the Hotel, the Cottage looks having an astonishing potential to host artists and their life. We tried as much as possible to understand which are the qualities and which are the issue of the Cottage. The volume of the Cottage itself looks intriguing from the exterior but very weird and dodgy once you access the ground floor and the higher levels, except for the double height mezzanine  that we decided to preserve. Slabs, staircases, partition walls are gone, giving new breath to the interior, celebrating a wide and high freespace, the one we imagined for a contemporary Theater, profiting by the double height mezzanine room as a backstage and vernissage space. The artists will stay at the lower level: three basic Artist rooms with a shared kitchen, dining and a living room that takes place in that nice space with the large arched windows. There, we made a cut in the floor so to connect the space to the lower level which is one of the various exhibition spaces we propose by reusing the labyrinth of niches and rooms of the existing architecture. On this level, artists own for the period of their staying, an Atelier, an individual Workshop linked to the common shared external space. This level represents an informal meeting space between artists and visitors who can walk around exploring both production and exhibition. 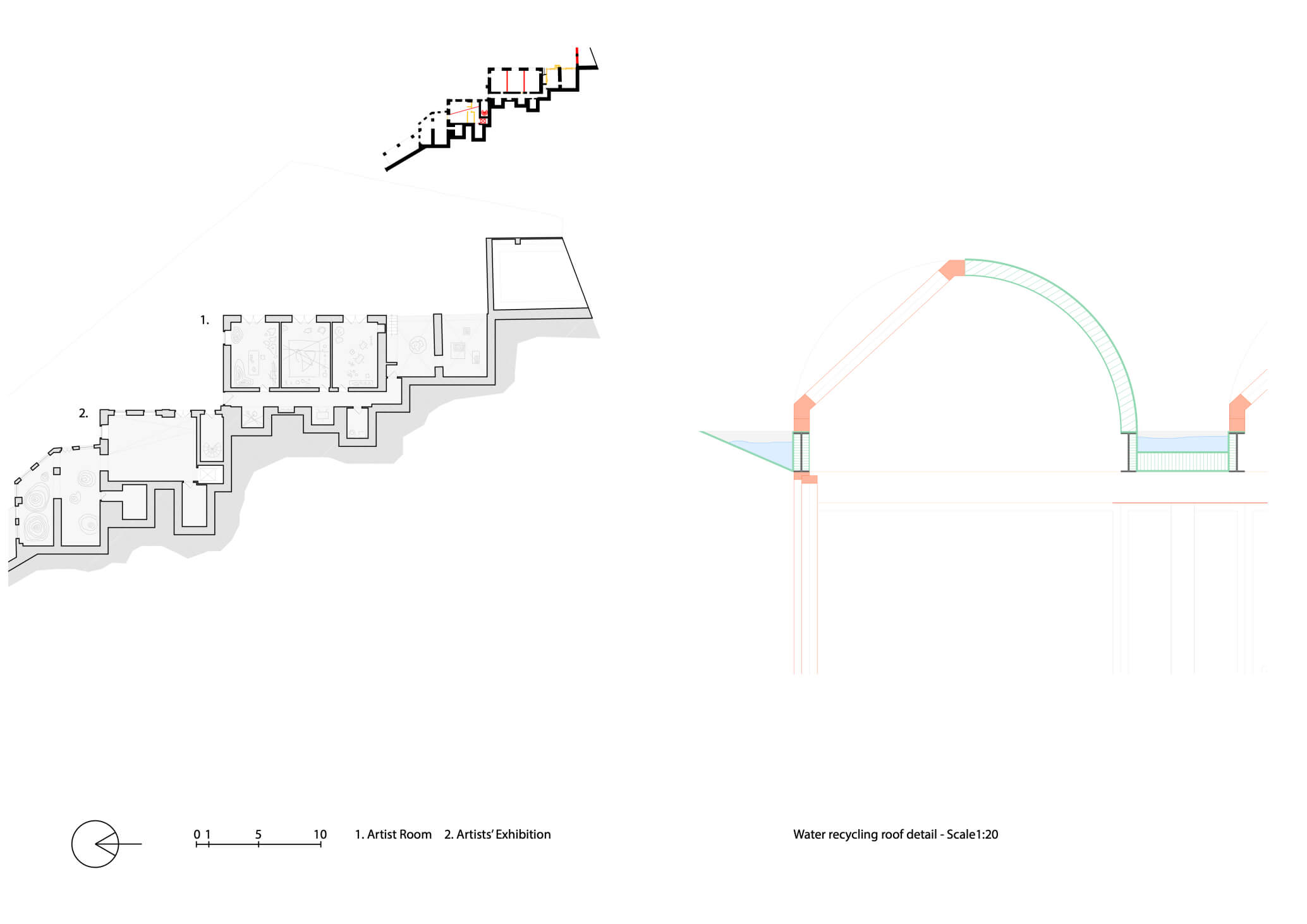 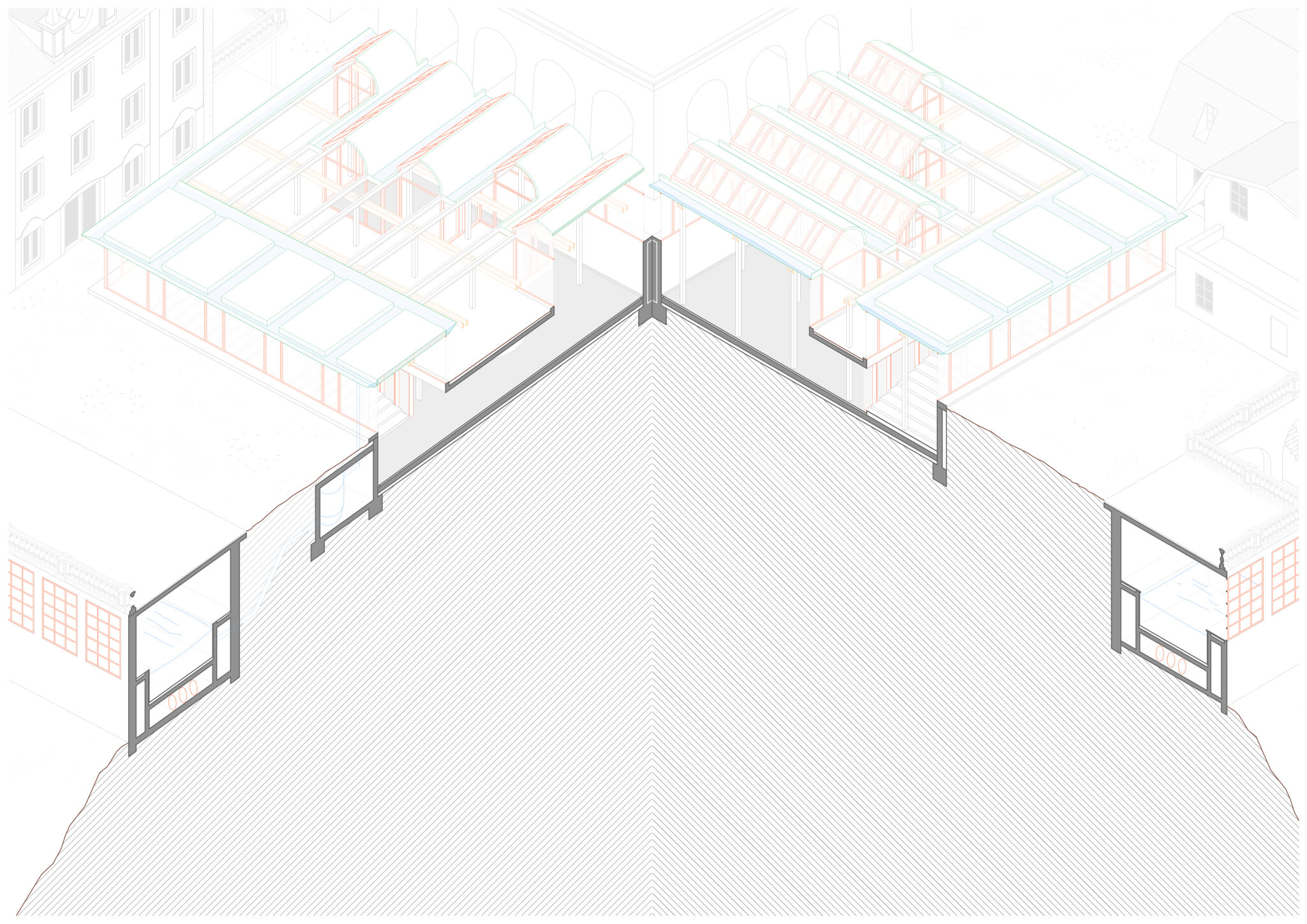 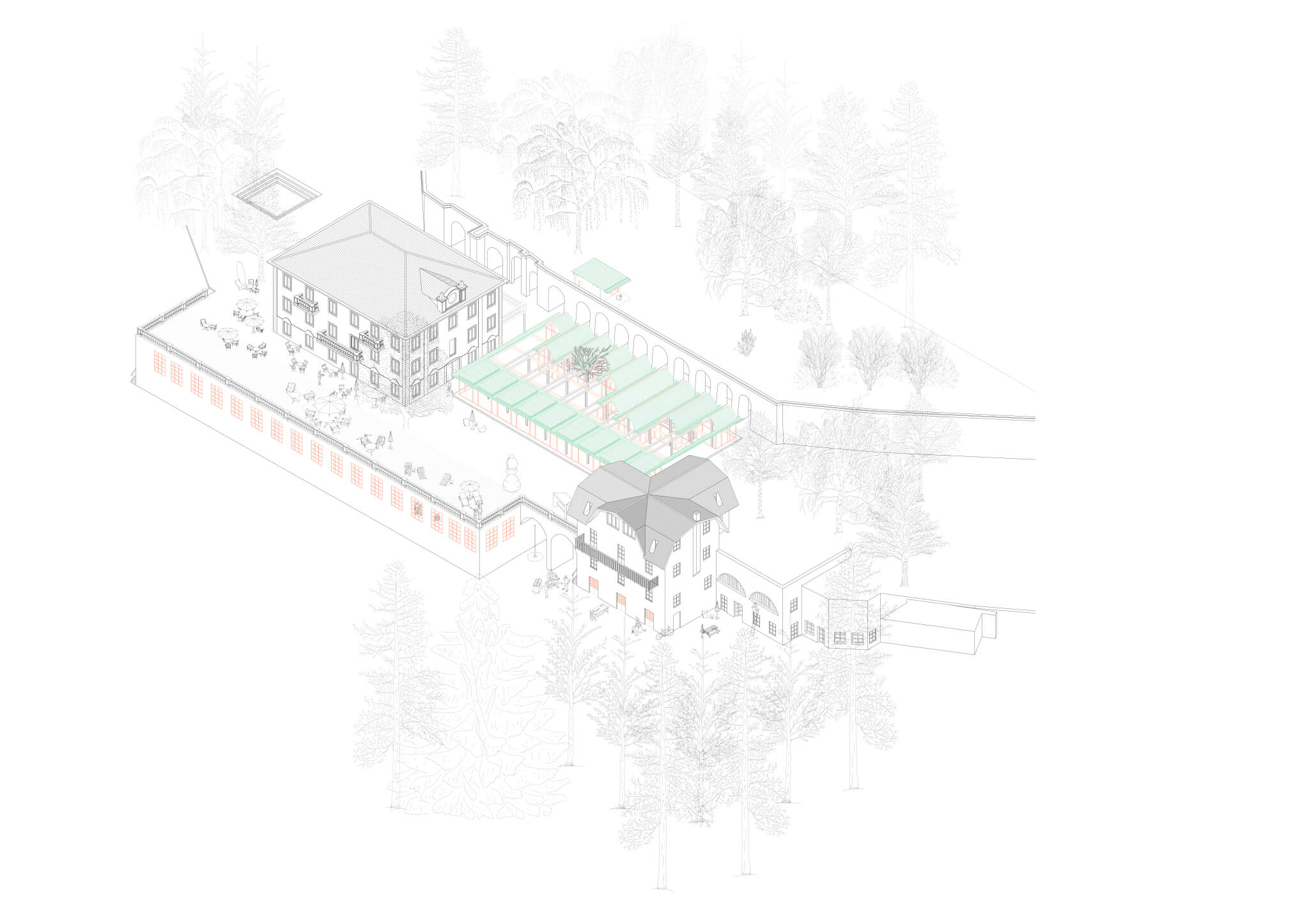 When we mean Courtyard we refer to that in-between space that acts as a platform linking the Hotel guests, the Cottage life and the artists world. Conceptually and physically. It is a shelter for culture. A big, light roof that hosts moments of sharing production, creativity, sculpture, painting, whatever Art could generate. A basement space, very high accessible from an exhibition gallery ramp that brings people down from the Hotel and Cottage entrance to the hidden, light world of Art where artists practice day and night. The structure of this rough, lower space has been conceived as much simple as possible, with the intention to have a fully transparent facade on the ground floor that can put in relation both horizontally and diagonally visitors and artists: concrete floors and pillars, steel beams and aluminum, glass and copper. We mean our intervention as a big roof, and not only by words. It is a big roof and not only by words. It is a bog roof and it acts as a bug roof should do. 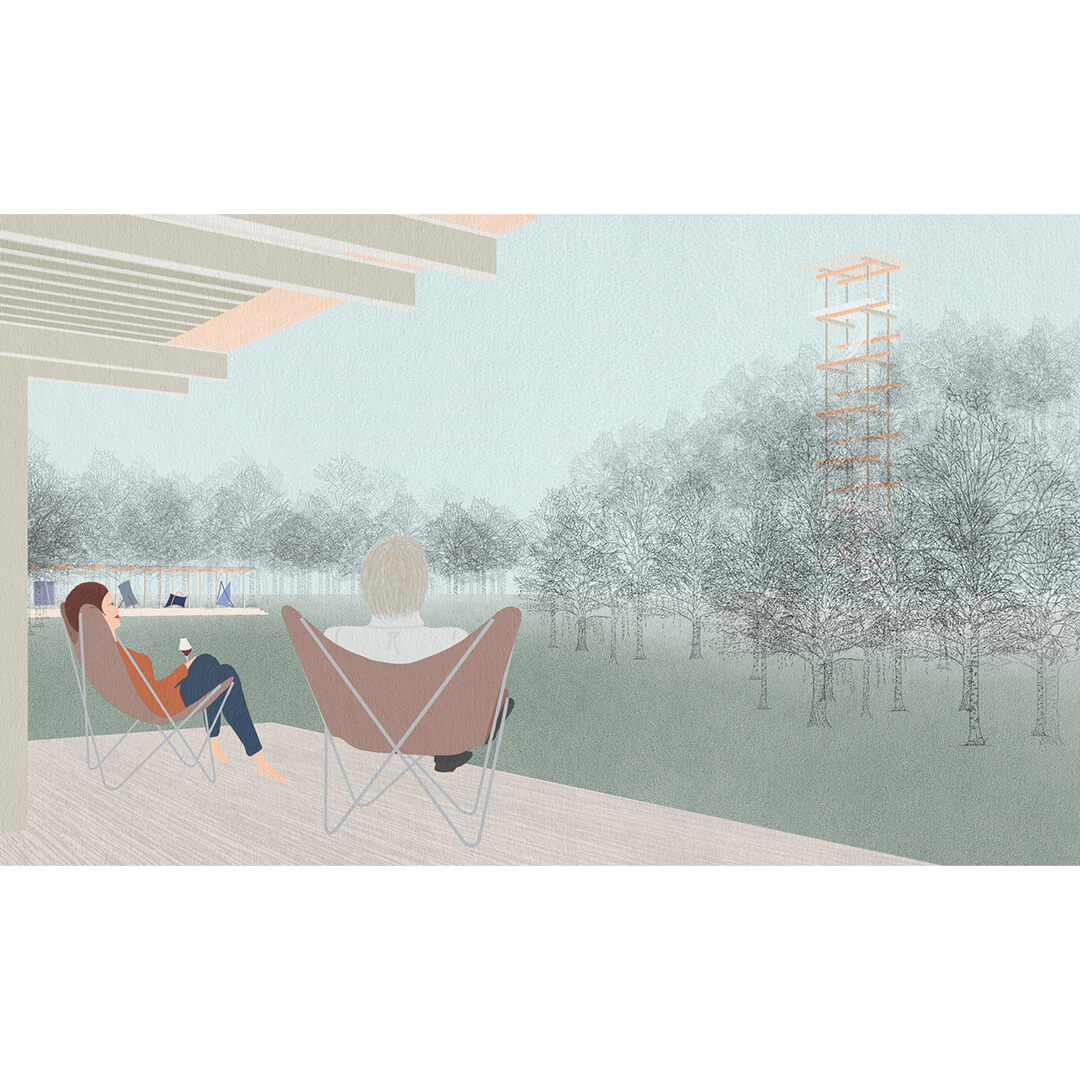 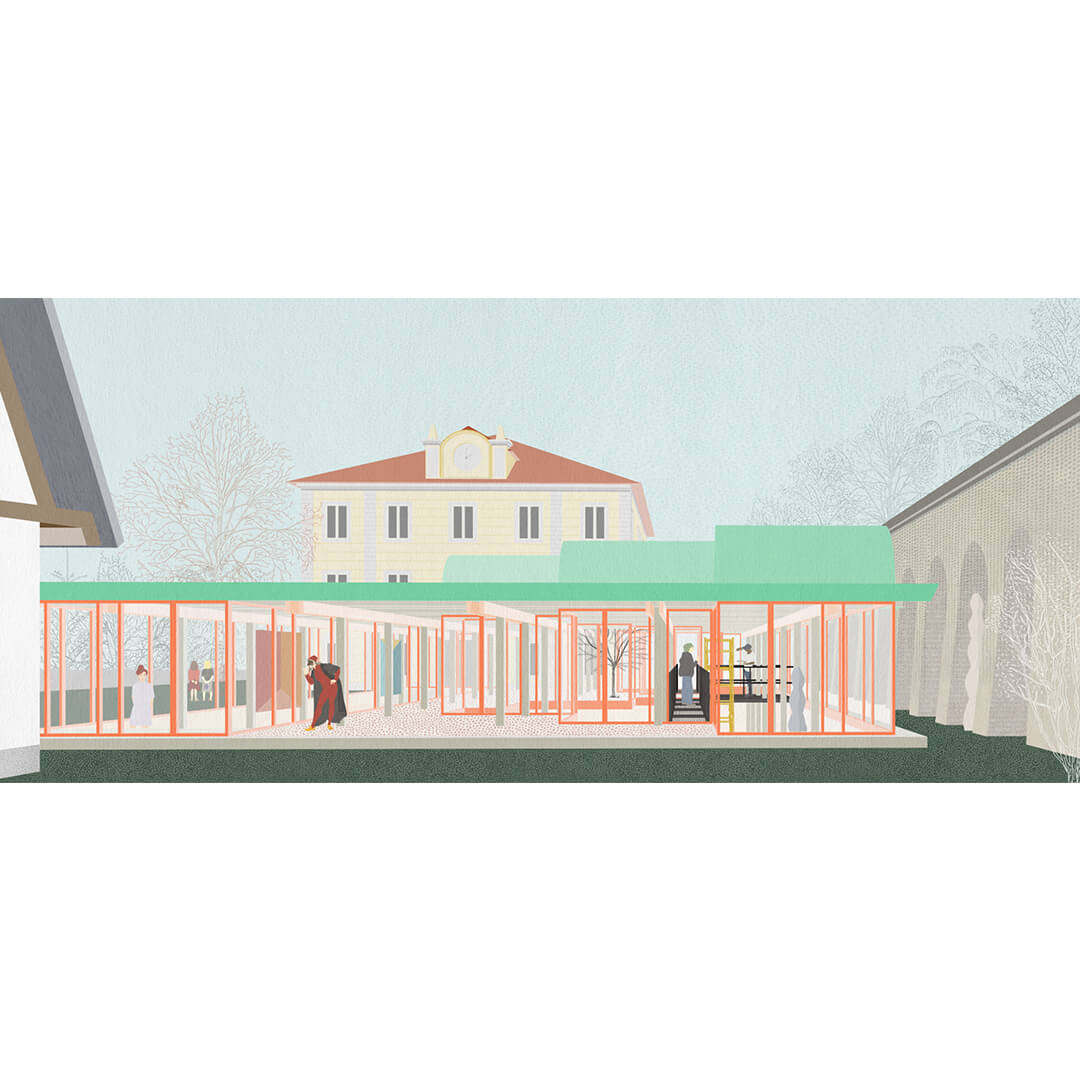 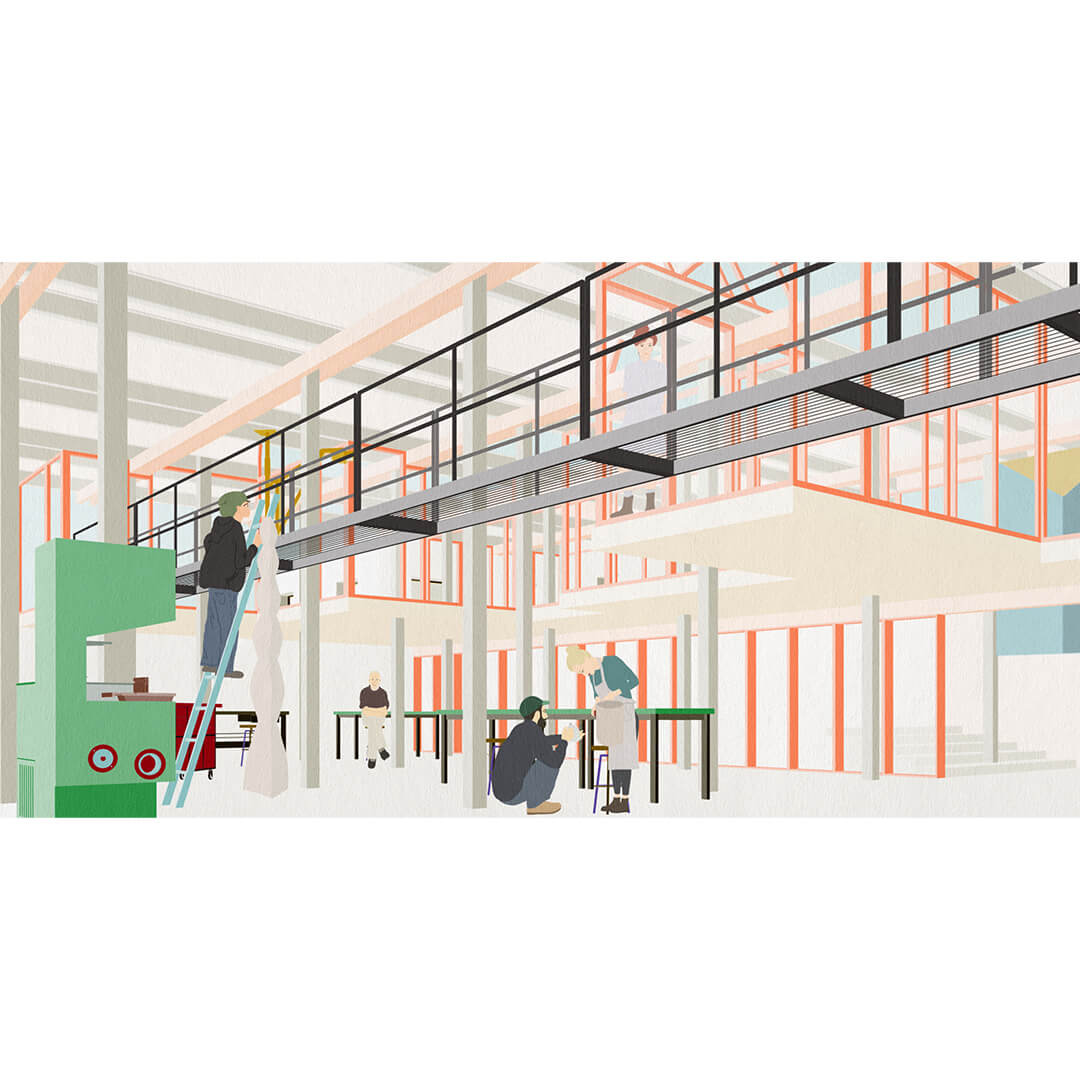 Sheds North oriented to catch diffuse light, like Brancusi’s studio giving to the lower workshop a calm and inspiring atmosphere. Because we cover a large portion of land we want to use our roof to collect rain water dropped down and stored in tanks and then reused to supply sanitary needs and to ‘fee’ the wellness area after being purified. The program is fulfilled by a series of Art cabins spread around the site, acting  as devices for artists, instead of being an art piece themselves. We tried to use the same constructive elements employed in our Courtyard in order to create visible link between the intervention which consists in a series of 7 versatile ‘pods’ and usable by artists to exhibit their work in many ways. One of the 7 installations is a watching tower, a tall viewpoint to enjoy and appreciate the beauty of this charming venue, and last but not least it acts as a landmark to celebrate Art.