The proposal seeks to turn the crossing into an outdoor island garden. A combination of the heterogeneous domesticity of the interior spaces of the island with the intense flows of the street.

The proposed environment has its roots in popular historical spaces such as fountains and picnic areas, shady and cool spaces where to gather, which can be reached by soft paths surrounded by bushes. The Claroscuro, motto of the contest, is the union of path and room, a square with an open and flat space where you can see the sky and a forest of trees to protect yourself from the sun and heat. The square becomes an abstract and free game space as it is not specifically defined as a playground, thus seeking to respond to the premises of the playable city and fostering the coexistence of users of all ages. Chance play and children’s autonomy are enhanced. Fixed furniture is proposed (tables, benches, stands, spaces to lie down and play) of different sizes, heights and geometries, being able to guarantee the use by both adults and children with different motor capacities and which at the same time allows multiple combinations and domestic arrangements. that generate correlations to the entire area of ​​the square.

The proposal proposes the creation of an endorheic basin, a small topographic change in the entire area to maximize the collection of water. Three types of pavement are used, in addition to the existing paving stone that is maintained for functionality and for the maintenance of services and to recognize what exists, being one more layer of the identity and urban history of the crosses of the Ensanche Barcelonés. 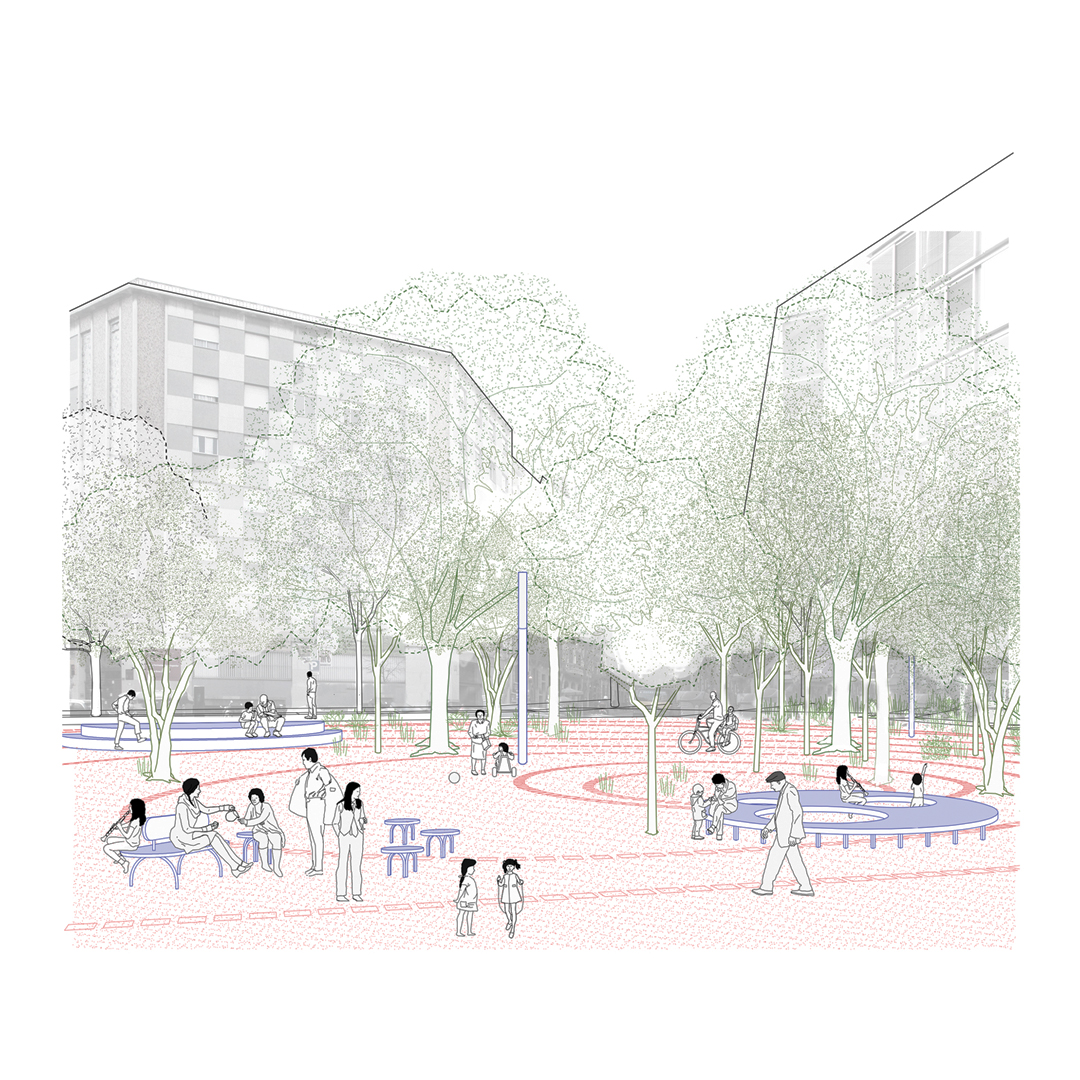 In the central space, a stabilized compacted earth pavement is placed, which directs the rainwater with controlled slopes towards a central point where a large gravel infiltration pit is placed, seeking maximum infiltration of rainwater without causing deterioration. of existing structures. For this reason, the entire interior of the square has a small slope with minimal affectation, like a basin. This basin appears when the natural slope of Girona street changes, which accumulates in the section of the crossing a drop of one meter (level 26 to 25), looking for a new lower point on the north side, with a height of 24.80 meters above sea level. This infiltration will help the vegetation to improve its development and it will have vents to introduce oxygen into the roots, which are also spillways to connect with the sanitation network in case of saturation. The Claroscuro is the space between the field and the forest, an ecotone where the different sensations that are achieved throughout the year give rise to multiple types of activity that seek intimate and open environments. 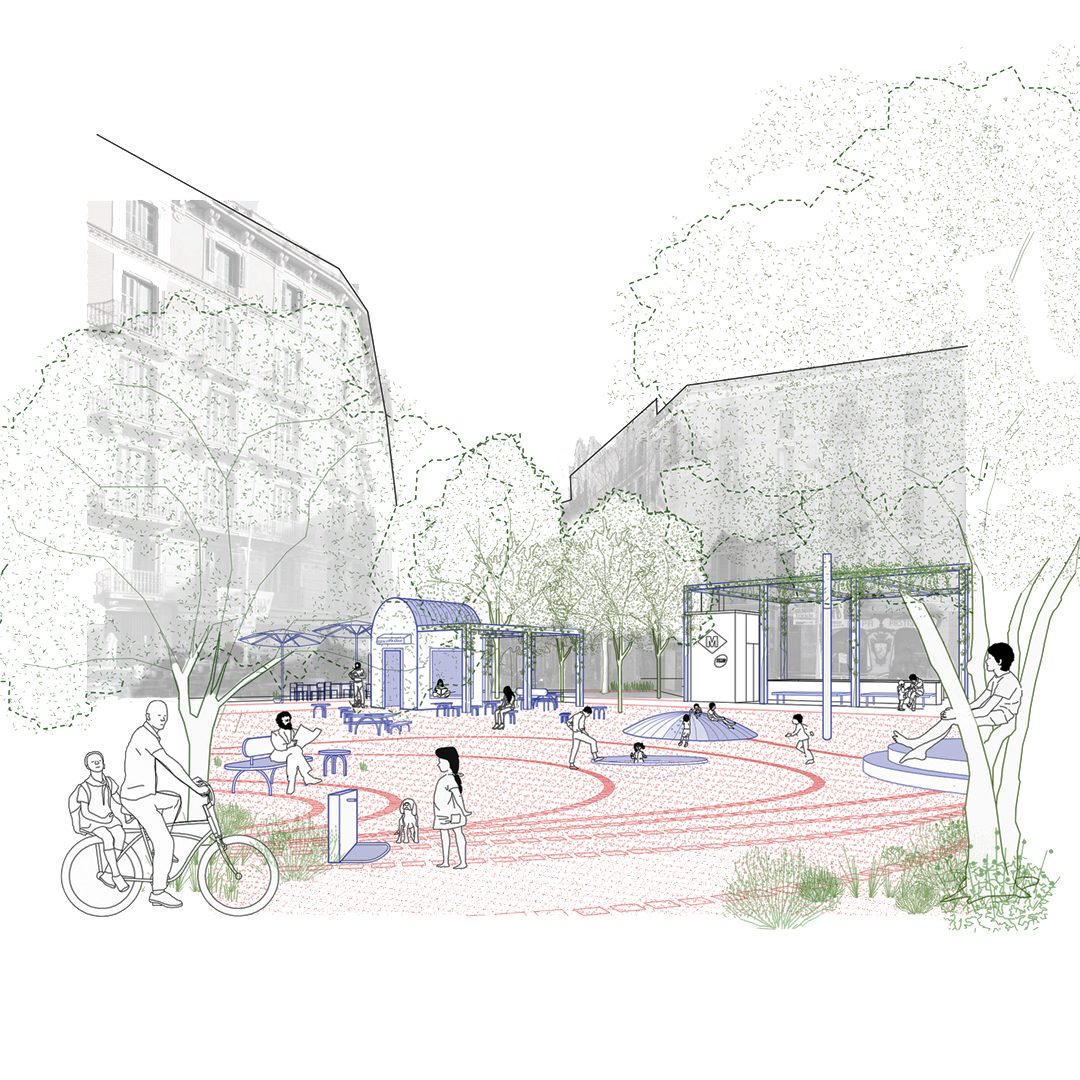 The basin is the basis for the correct development of a diverse tree mass (white maple, cherry, small-leaf ash and common elm) adapted in Barcelona and with fauna interest, which has complementary variations in smell and color throughout the year. All species are deciduous, allowing maximum sunlight in winter. Under it, in the shadier areas and where the slope is steeper, a Mediterranean understory is planted (hawthorn, Mediterranean honeysuckle, mastic, St. George’s grass and Ribbon). In the sunniest areas, the shrubs will have a floral and aromatic garden character, also indigenous and with less water requirements (myrtle, narrow-leaved aladierno, garden salve, rosemary, sage, thyme, lavender, millefeuille and alfalfa).

The proposal also identifies the chamfers of the sea side as the most traveled and configures them as open spaces with wide sidewalks. At the chamfer where we find the Funicular and Belén bar, two places with a long tradition, a large space with terrapref-type earth pavers is reserved for the terraces. At the corner of the subway, we propose a pergola with a wooden structure that indicates the access and generates a portico for waiting and a room where you can take shelter on rainy days. 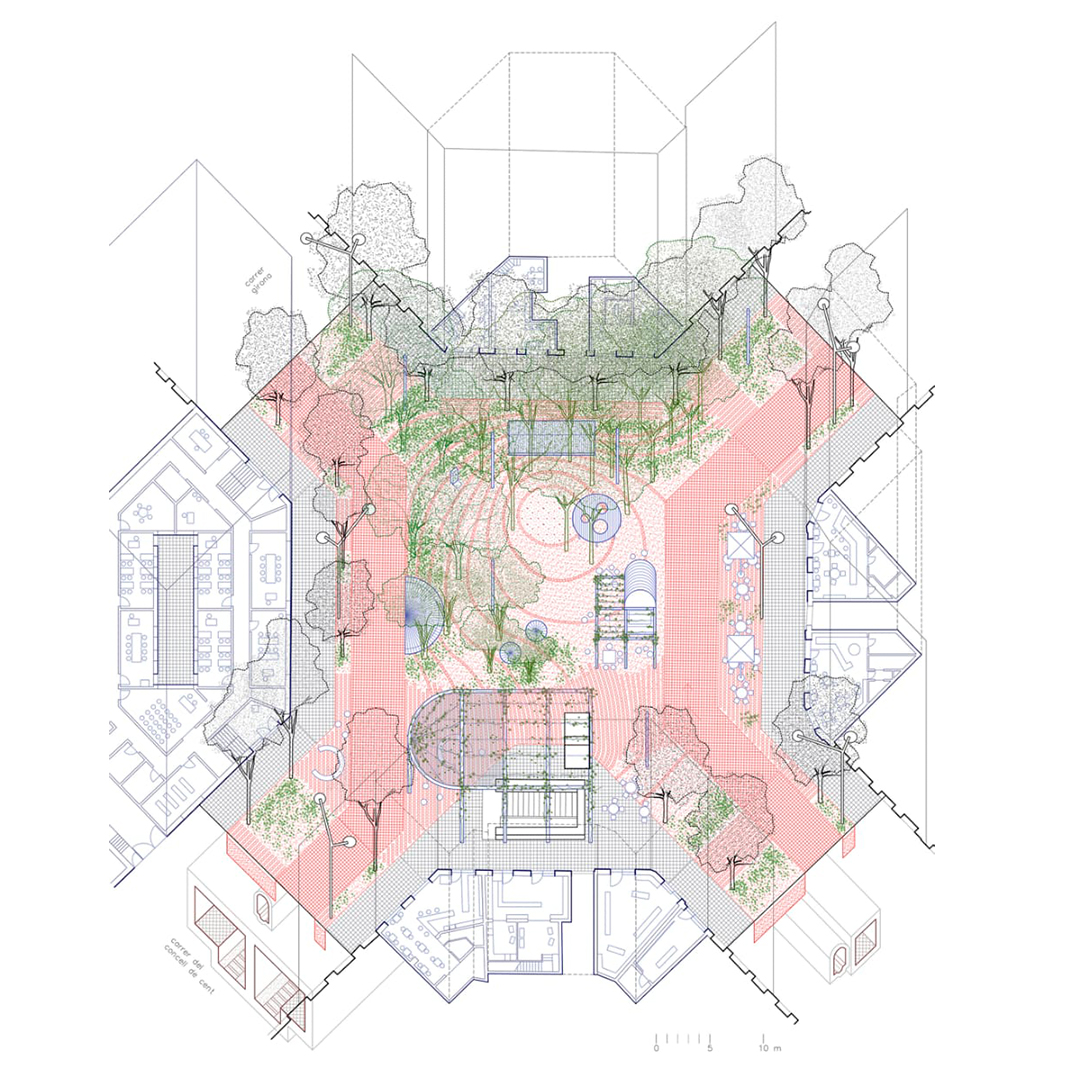 The Sofia Brat library, located in the interior of the East Island (100m away from the square) is a facility with the potential to strengthen community life, but due to the lack of visibility of the access it is little used. To improve visibility and use, an extension of the library in the shape of a booth is proposed, located in the area of ​​the clearing, as a point of reading and collection of books, replacing the mailbox on Girona street and creating a living area with tables and mobile chairs under a gazebo to improve comfort in both summer and winter. This small gazebo, together with the underground one, provide the necessary shade on the existing slab to the subsoil, which prevents the appearance of trees.