There could be nothing more beautiful than a palace of music to crown the city of Vilnius. Like a musical instrument it is located at the top of Taura Hill to expand music throughout the city, making it vivid.

As if it were a lighthouse, the project appears as a luminous beacon, as a symbol of guidance from all viewpoints, with the intensity and strength of expanding frozen music, but also with the finesse and serenity that its materiality provides; the iced glass that reflects the atmosphere of the sky and, therefore, of the city. Depending on the time of the day, the Concert Hall disappears like soft music. Other times, nights of concerts or sunny days, it translates the music throughout its stretched-out fingers, echoing the sound and letting it embrace the whole city. Sometimes only the luminous endings of the fingers may appear, like eyes or soft dots in the sky. And some days it looks like a stranded iceberg on top of the hill. 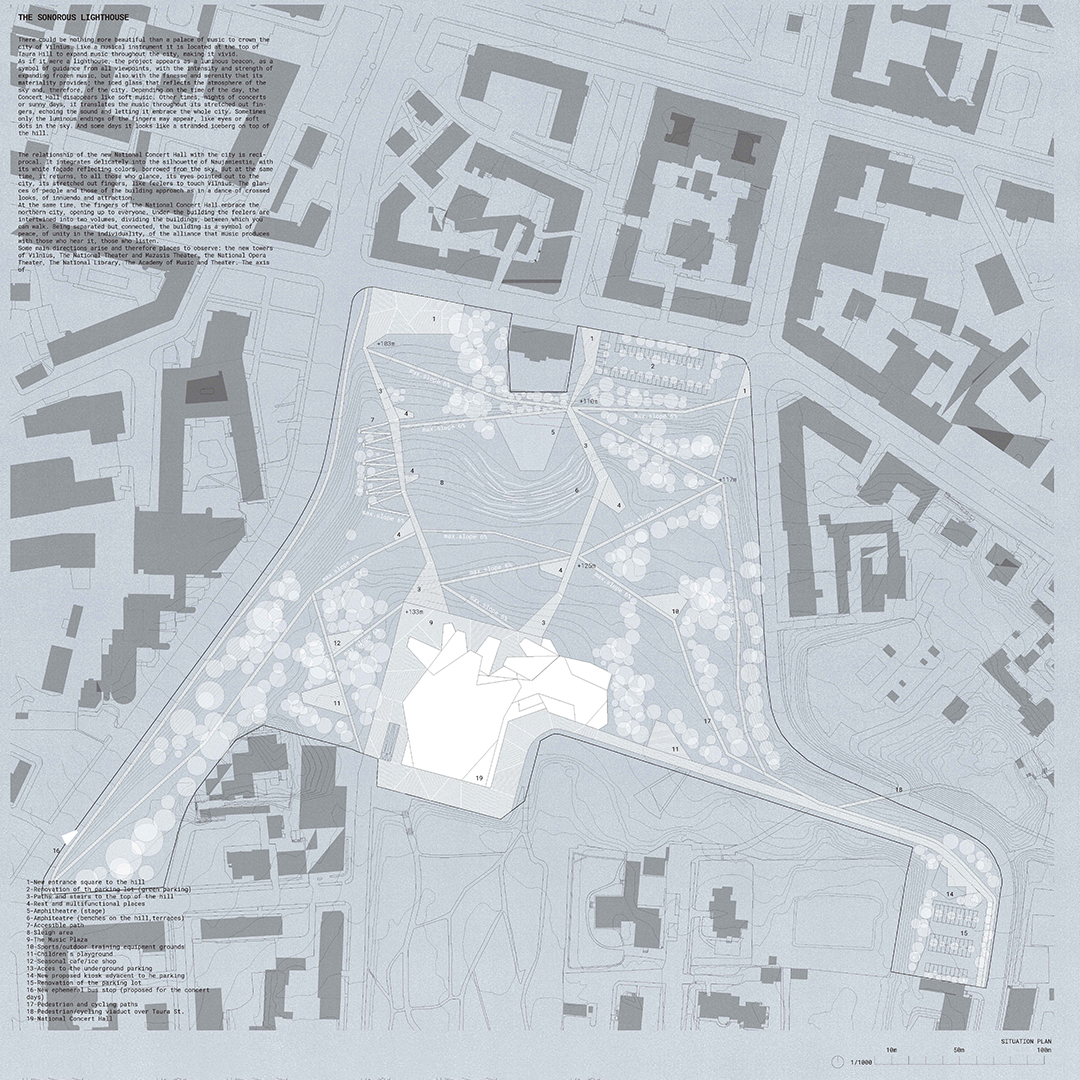 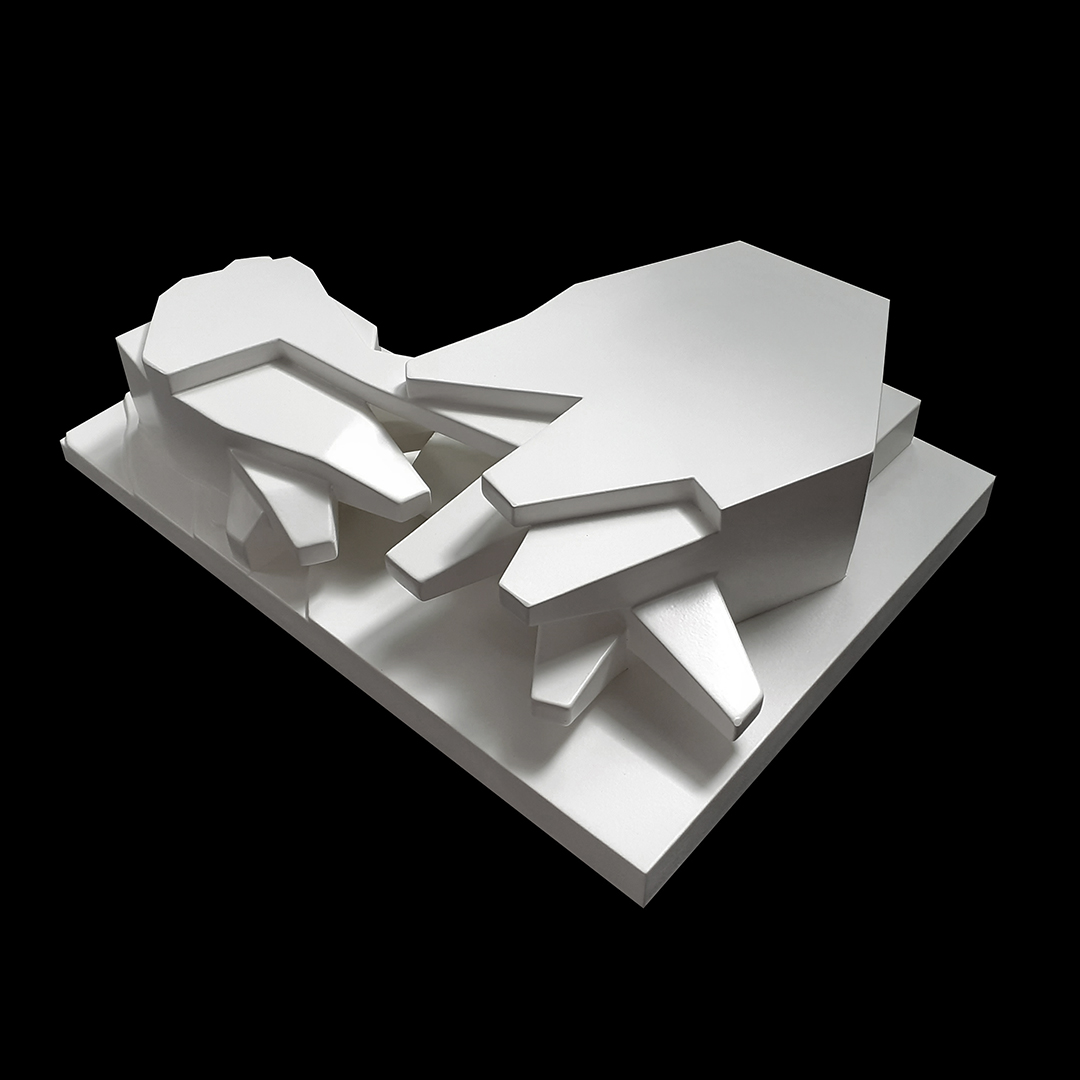 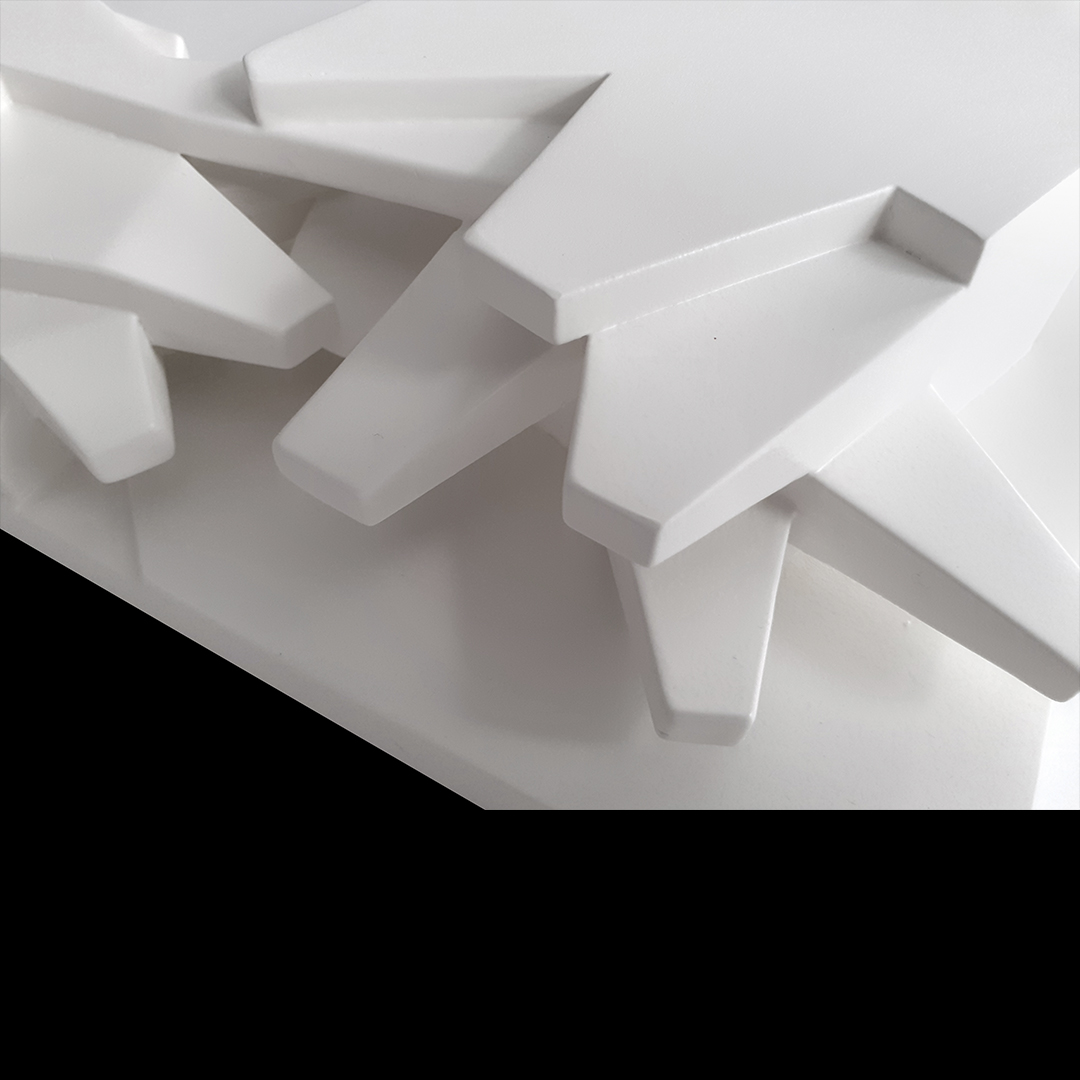 The relationship of the new National Concert Hall with the city is reciprocal. It integrates delicately into the silhouette of Naujamiestis, with its white façade reflecting colors, borrowed from the sky. But at the same time, it returns to all those who glance, its eyes pointed out to the city, its stretched out fingers, like feelers to touch Vilnius. The glances of people and those of the building approach as in a dance of crossed looks, of innuendo and attraction.

At the same time, the fingers of the National Concert Hall embrace the northern city, opening up to everyone. Under the building the feelers are intertwined into two volumes, dividing the buildings, between which you can walk. Being separated but connected, the building is a symbol of peace, of unity in the individuality, of the alliance that music produces with those who hear it, those who listen.

Some main directions arise and therefore places to observe: the new towers of Vilnius, The National Theater and Mazasis Theater, the National Opera Theater, The National Library, The Academy of Music and Theater. The axis of Lukiskes Square is taken on, breaking the building in two at the entrance. 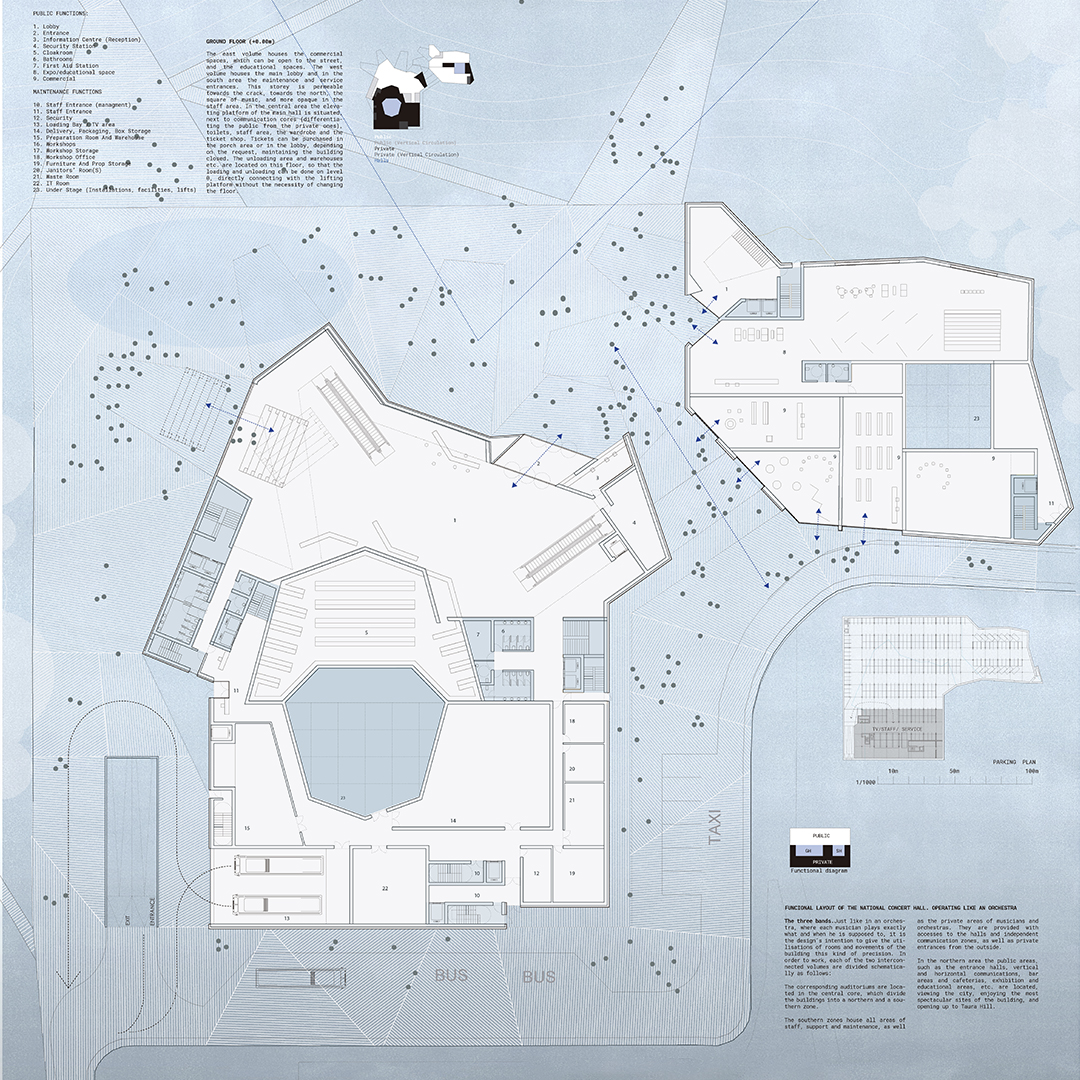 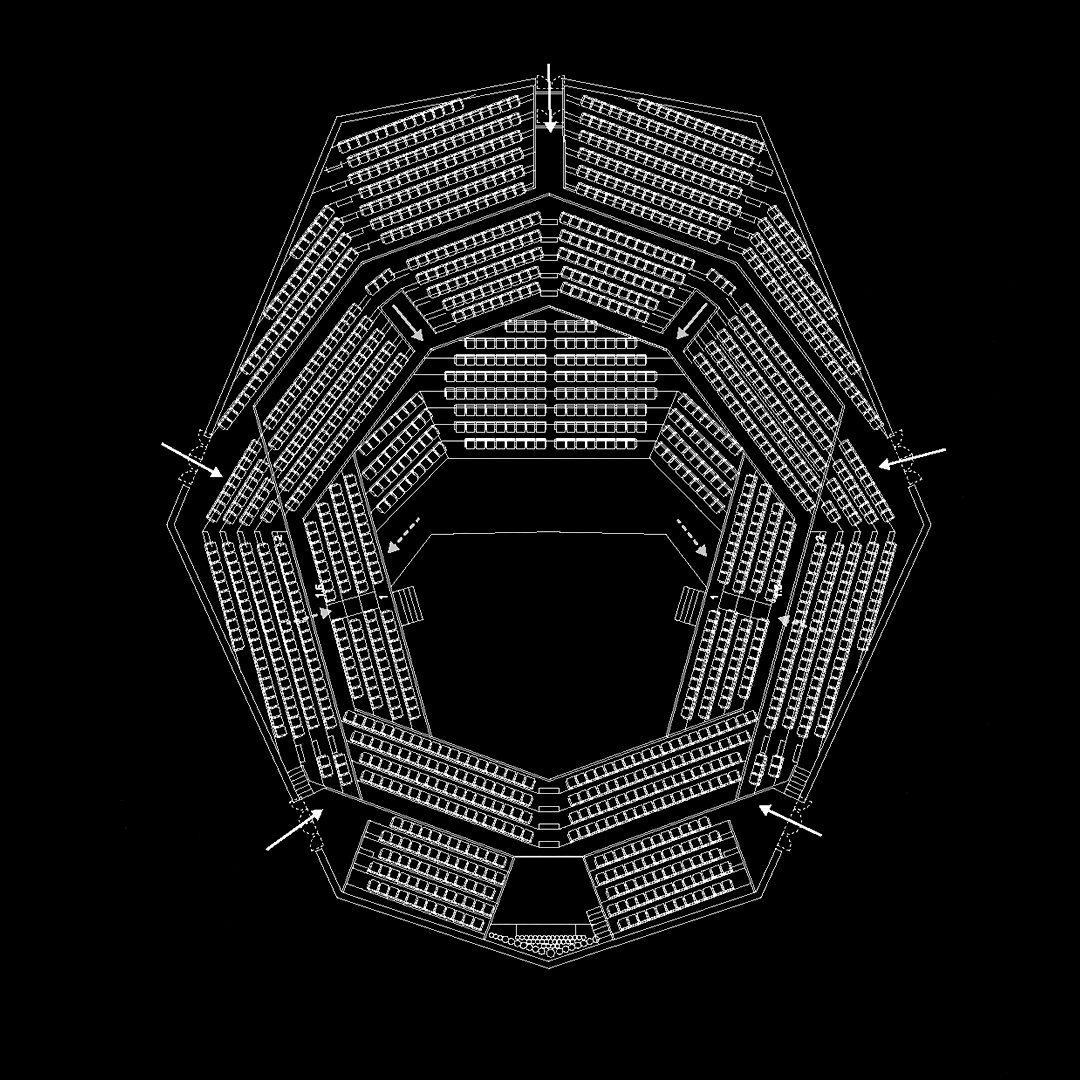 Taura Hill. The spectacle of the city and the hill of music

Those of us who love music know that when attending a concert, the arrival also is of importance. That the influence of music does not only affect the moment we listen it also conquers the expectations, the approach, also the way home and in the end the memory. That is why Taura Hill and the new Concert Hall must be profoundly interacting; as public places open to the city they establish a relationship of symbiosis, benefiting from each other.

The Concert Hall stands as the altarpiece and background of Taura Hill. Beneath, the hills offer a place of public use. Long pieces of white stone of varying length conquer the hill providing pavements, stairs and benches that allow the ascent to the National Concert Hall; but also tiers for spontaneous performances, allowing music to travel through the city like an explosion, like the stretching fingers of the building. In that way, the hill converts into an extension of the Concert Hall, but also into a Concert Hall itself, spontaneous acts; children playing together, street musicians, rehearsal of music groups, people reading, watching, talking, … Gentle slopes cross the hill on a different kind of promenade.

The spectacle of the Taura Hill starts at the bottom with the spontaneous acts and ends at the altarpiece with its criss-crossed hands of the Concert Hall, the crown of the city.

All the elements given in the excellent study provided for Taura Hill are integrated and fully respected. Small adjustments are suggested to ensure versatility of use and usage of the hill. The accessibility to all functional places of the hill is sought and the existing slopes are retained so that neither the image nor its great current uses, such as sleighing, change. 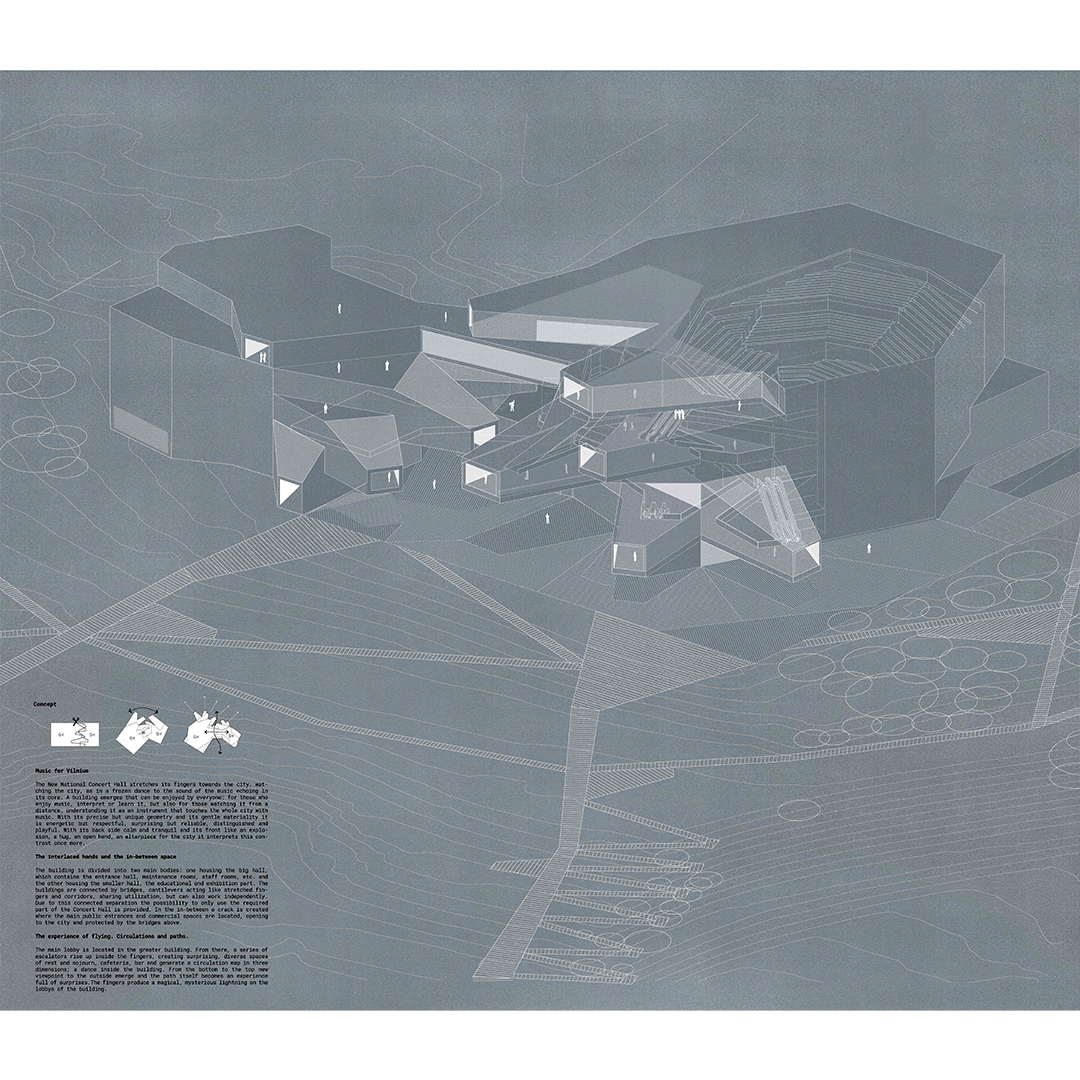 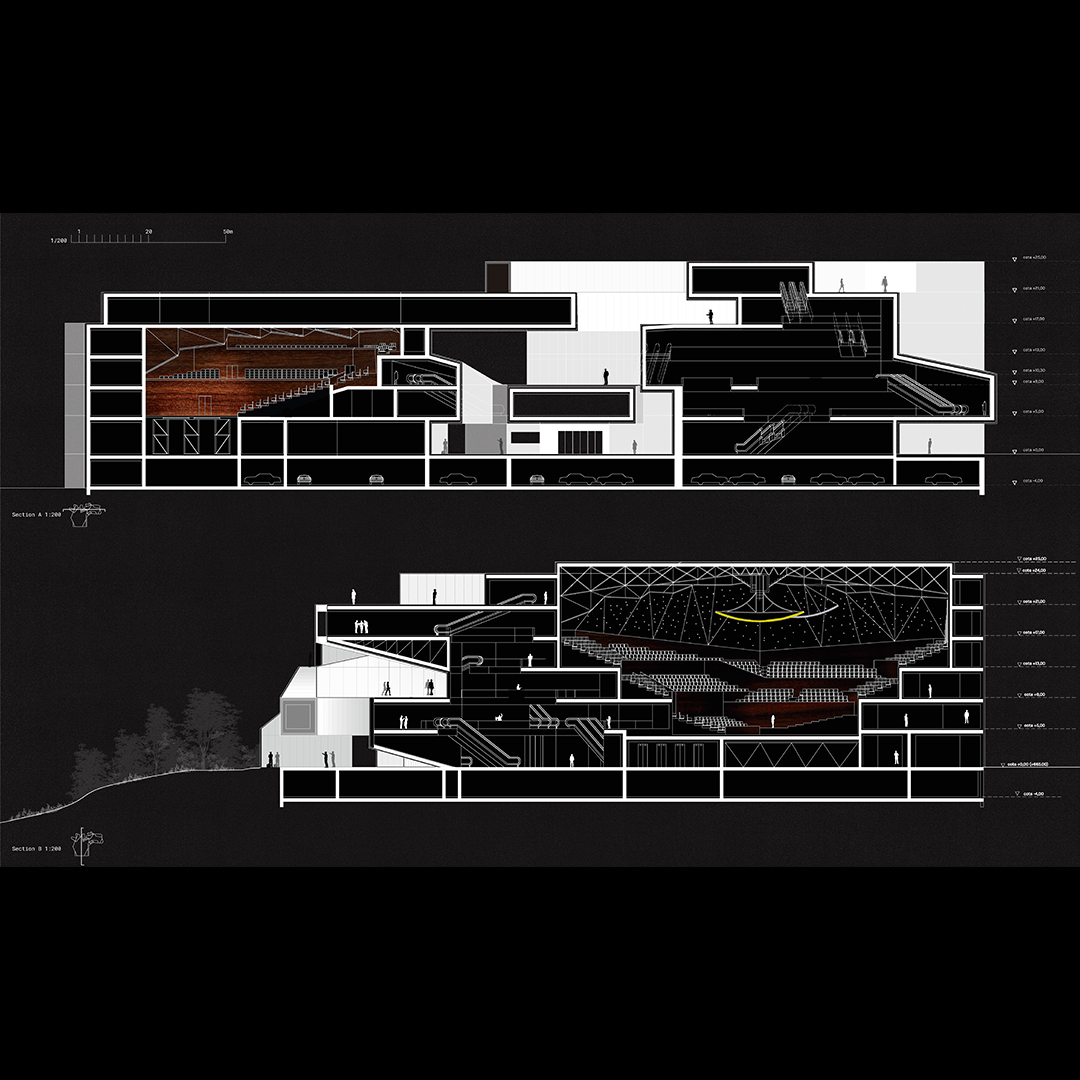 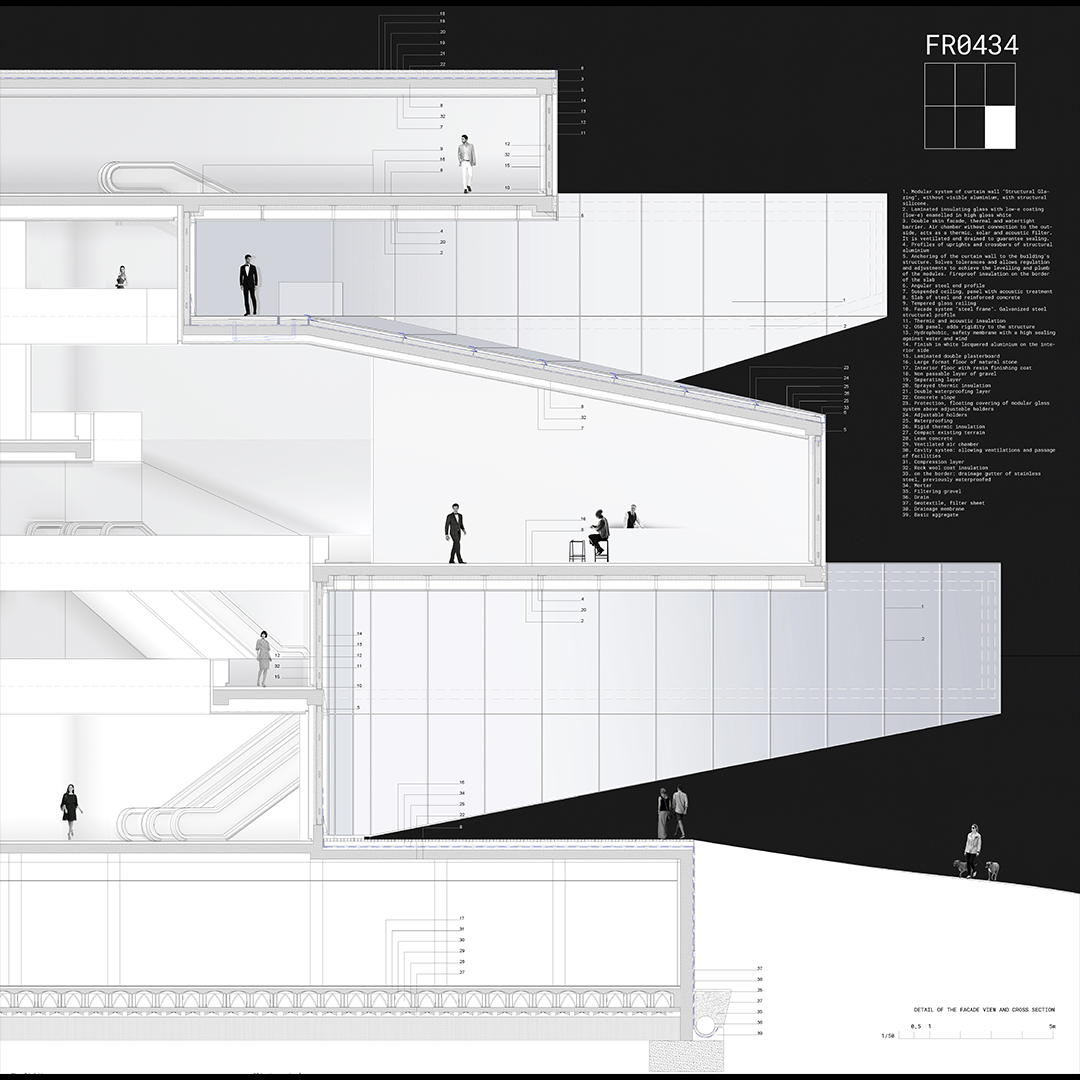 On the top, a public viewpoint under the cantilevers of the Concer Hall unites all the streams of visitors. The intersection of the buildings, hands and eyes of the Concert Hall create a covered space, where the entrances are located. This square, a meeting point, with incredible views, protected by the building itself, takes over the task of a threshold and an ambiguous boundary, in which you already enjoy the building even though you have not trespassed it. In winter, on its west side, an ice rink will be located, made almost of the same material as the facade, which, sheltered in the ice cave, is faced towards the city while people skate and the sound of music accompanies them. 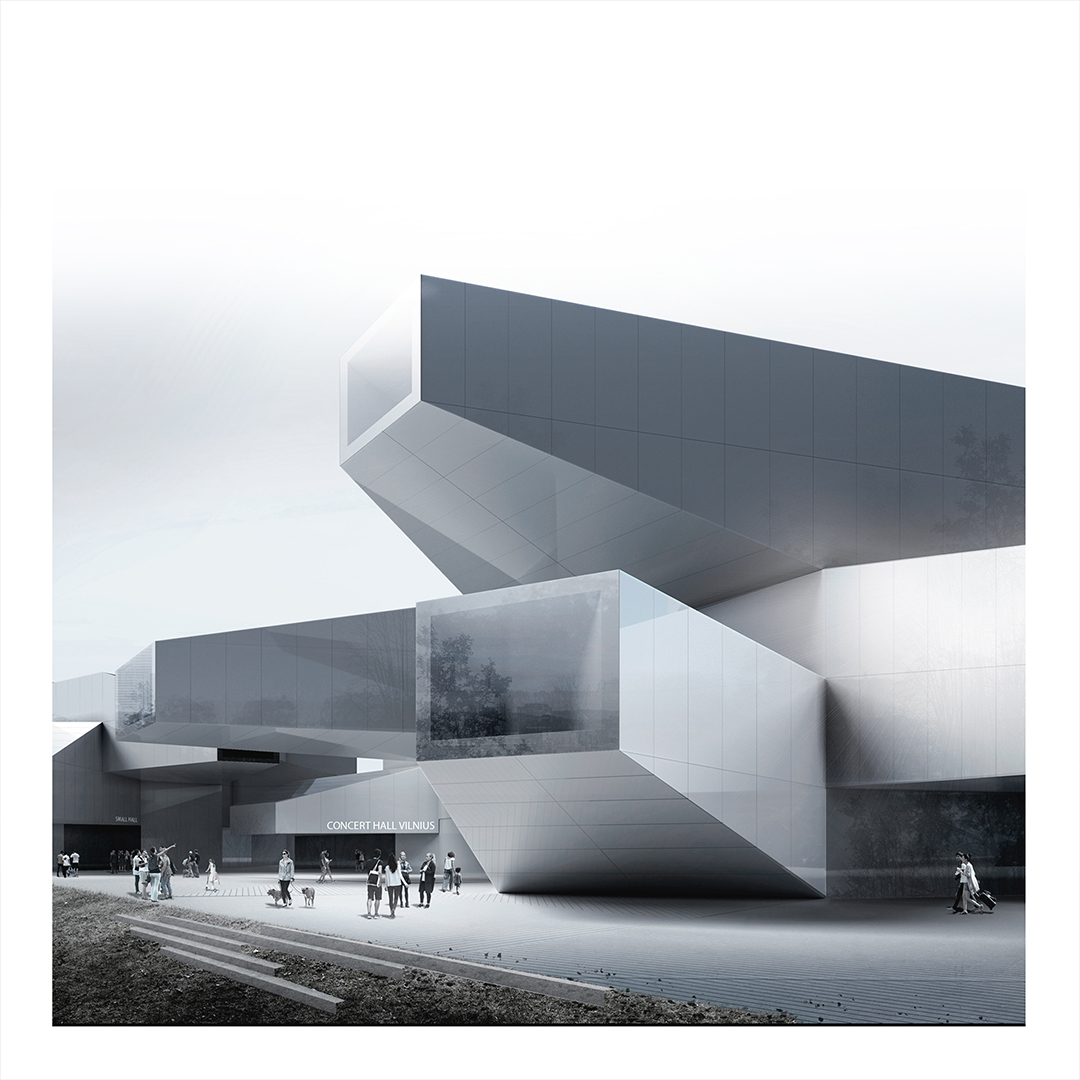 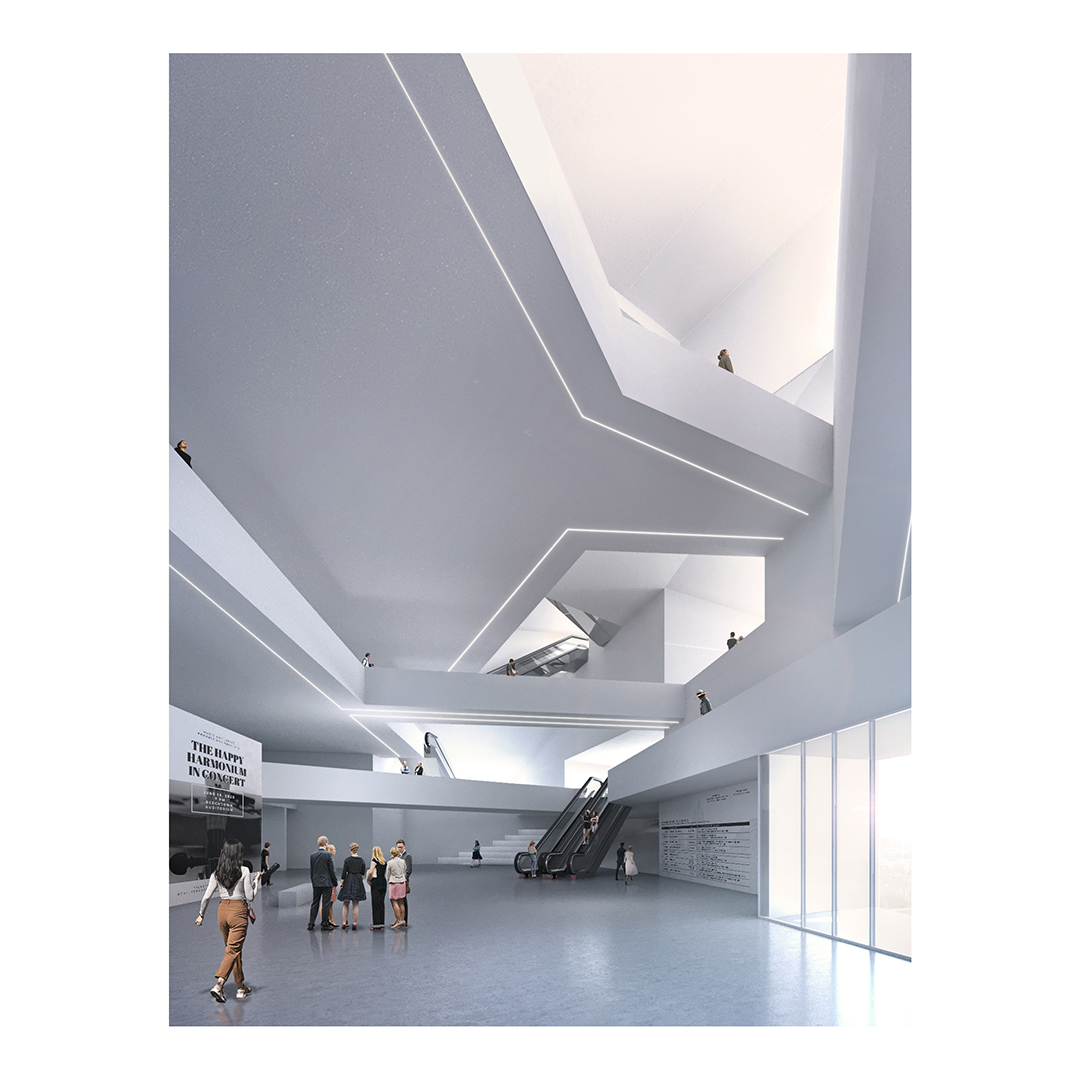 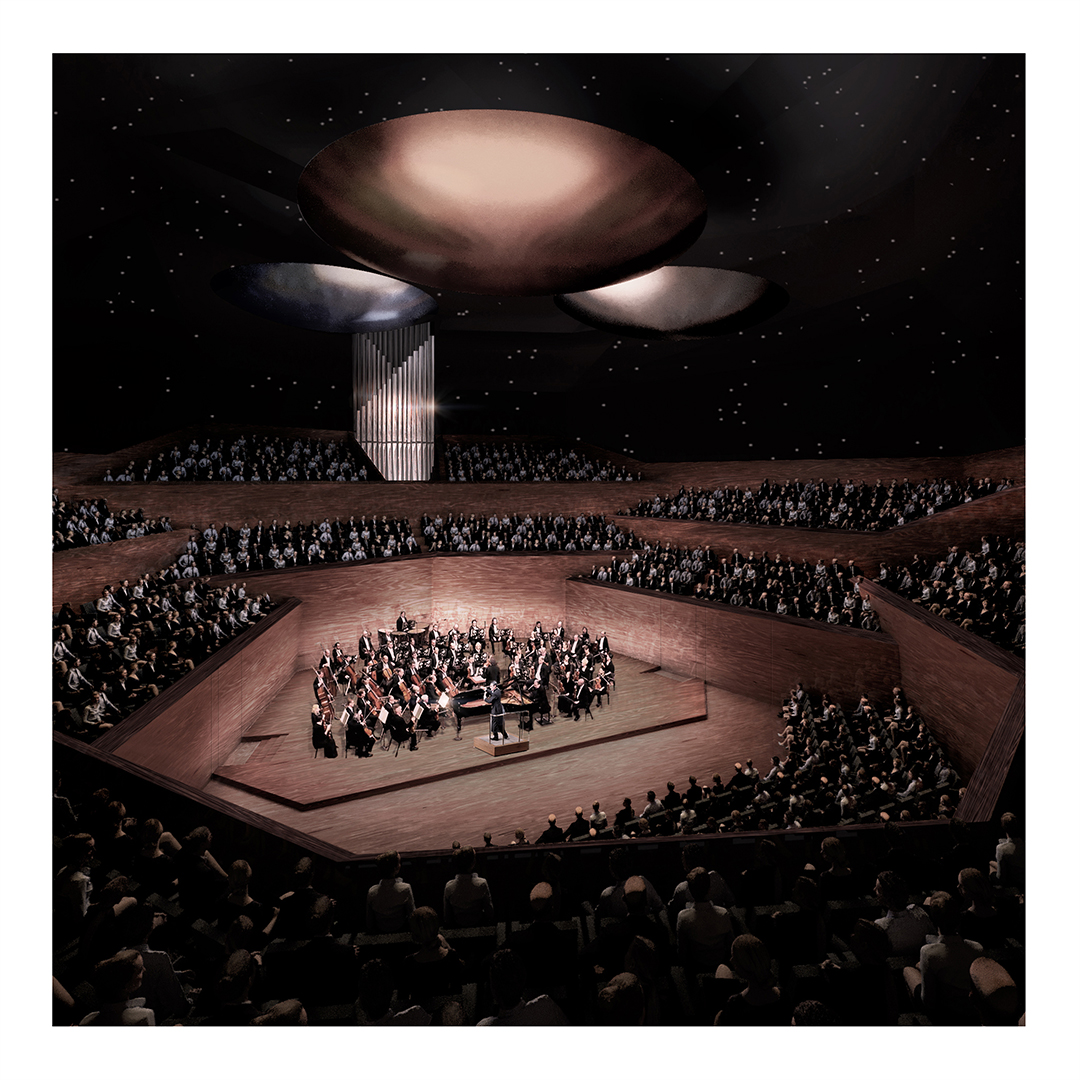 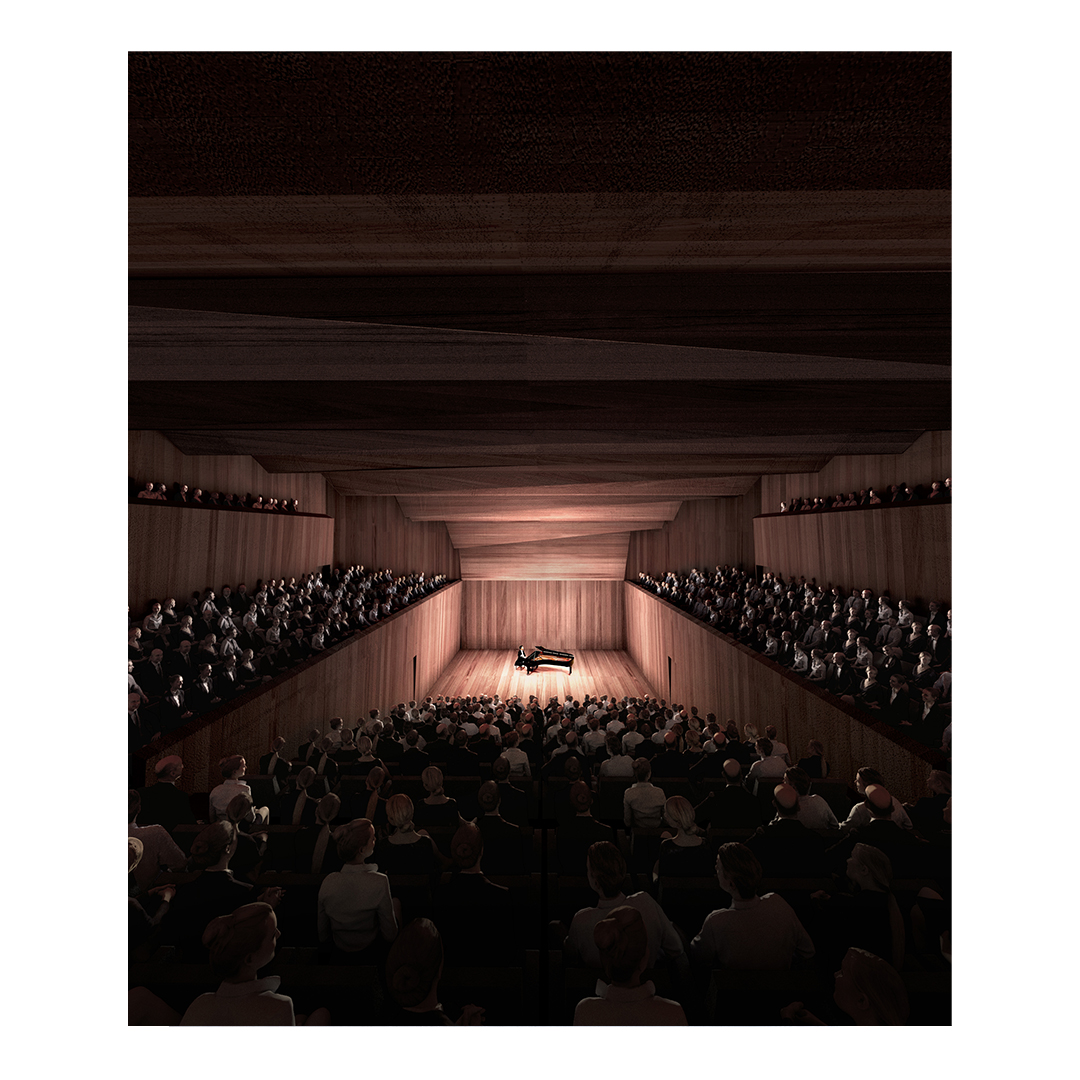 On the southern side: silence. The arrival is quiet and discreet; the flows of cars disappear underground, while the flows of people glide, almost without realizing it, between the two volumes, inhabiting the interstices. Towards the cemetery the National Concert Hall shows its serene side, a simple, clean, weightless volume due to its translucent white glass facade that reflects the natural slope, the trees and the sky. As we know, silence is an essential part of music, allowing sound to speak, allowing music to be heard, as is the tranquillity to a building.