The regeneration of the coastal area of Barcelona and its metropolitan area has been one of the most paradigmatic recent urban transformations. The recovery of the maritime space has had an impact on the fitting out of the beaches and the construction of a new seafront, but it has also been notable in the improvement of the innermost urban fabrics. 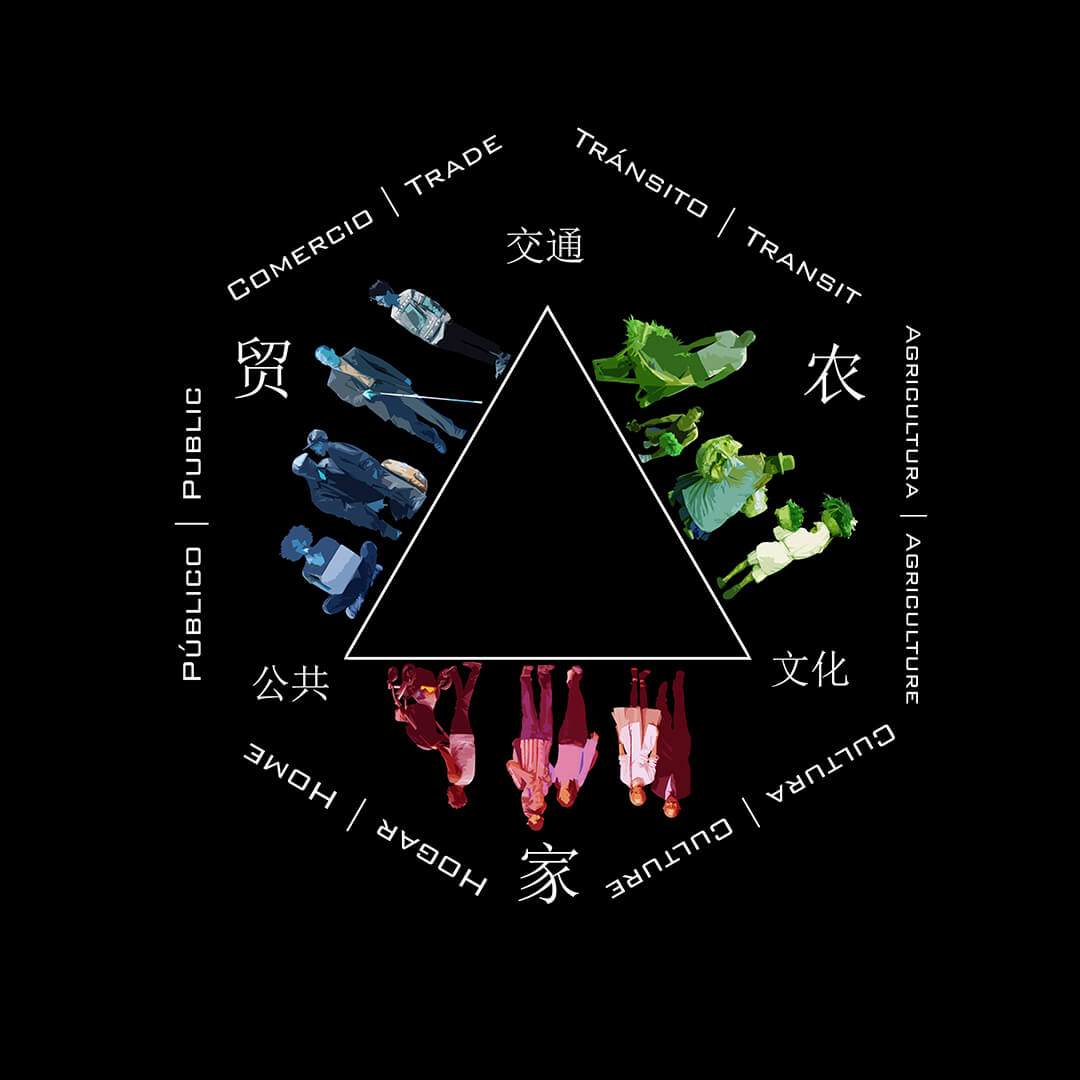 In Badalona, ​​the recovery of the coastal area began in the 1980s with the competition for the new port, beginning the progressive relocation of industries and large artifacts that had been placed in this privileged position following the train’s wake.

The Gorg sector, a name that refers to the deltaic character of the mouth of the Besós, grew on the old agricultural tracks, opening streets to place new industries in a wide space of 2.5 x 0.8 km between the train line and the south facade . de la Gran Vía. In recent years, the project of the Forum of Cultures and the recovery of the Besós canal on the one hand and the current construction project of the Port of Badalona on the other, have created privileged conditions for a fabric that maintains the productive character, with a strong commercial component in the Merca-China area and a large hypermarket in the sector closest to the train. The decision to keep the “three chimneys” of the old thermal power plant as an identity element of the metropolitan horizon also characterizes this sector, which has yet to resolve some variables around the large industrial facility. 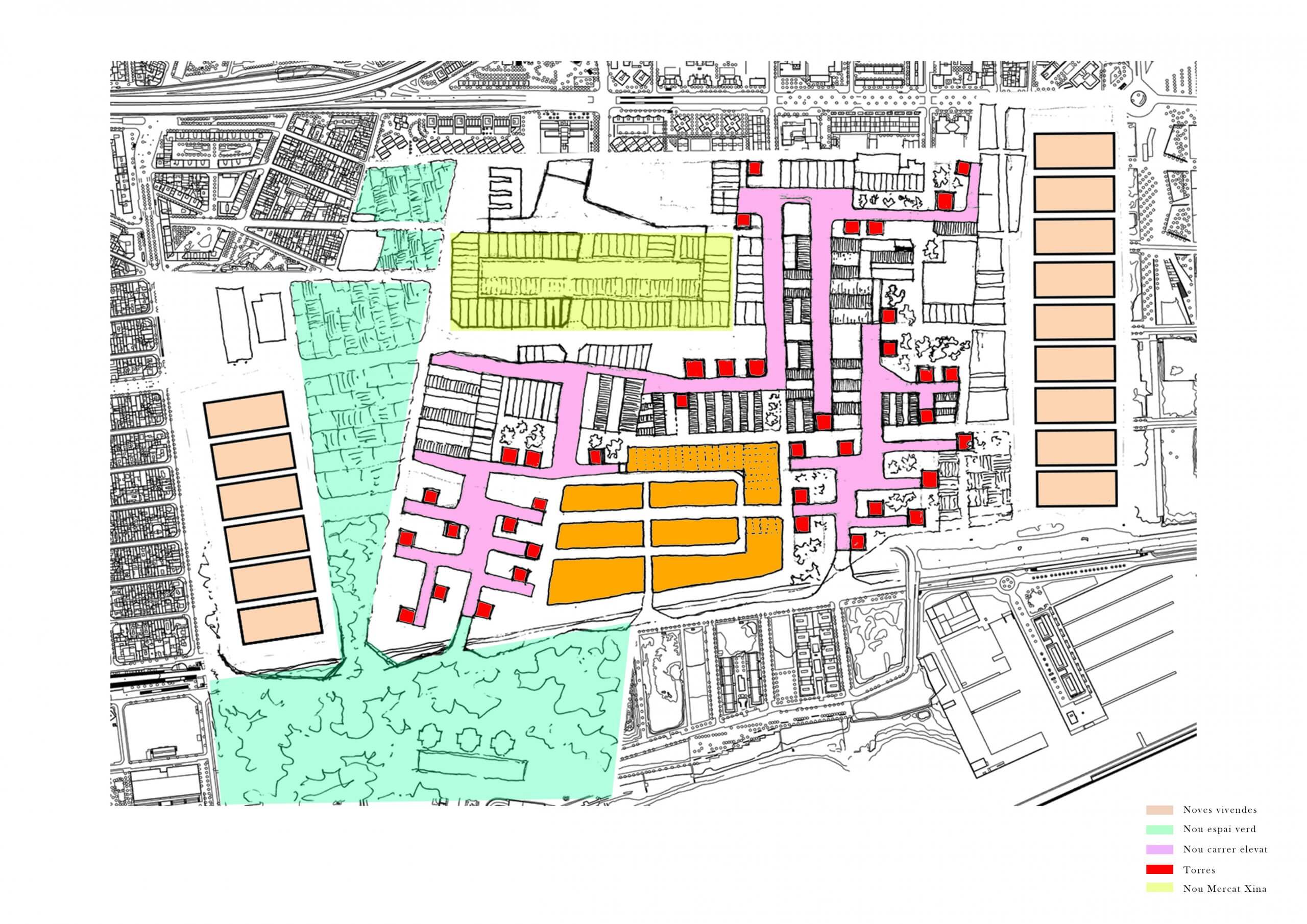 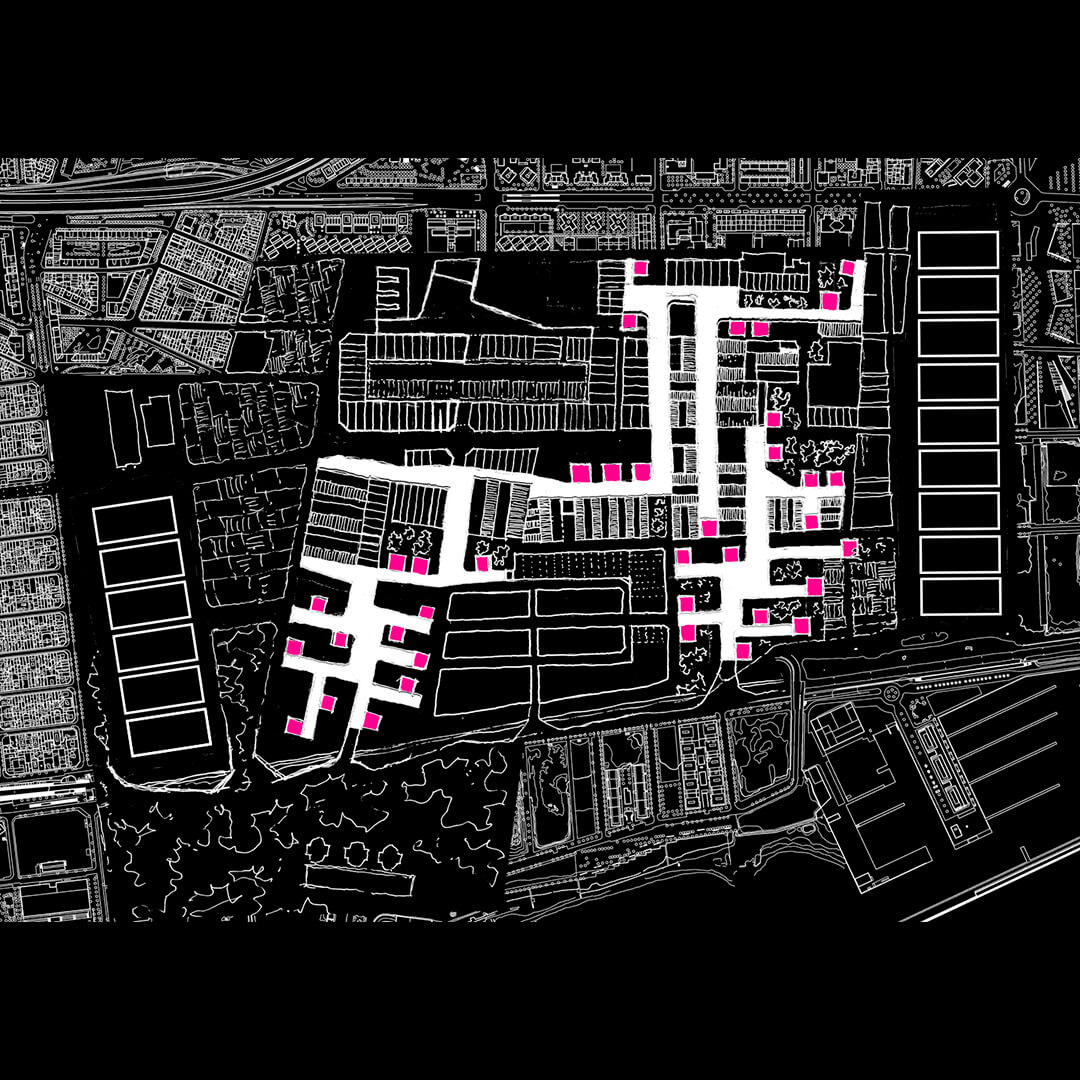 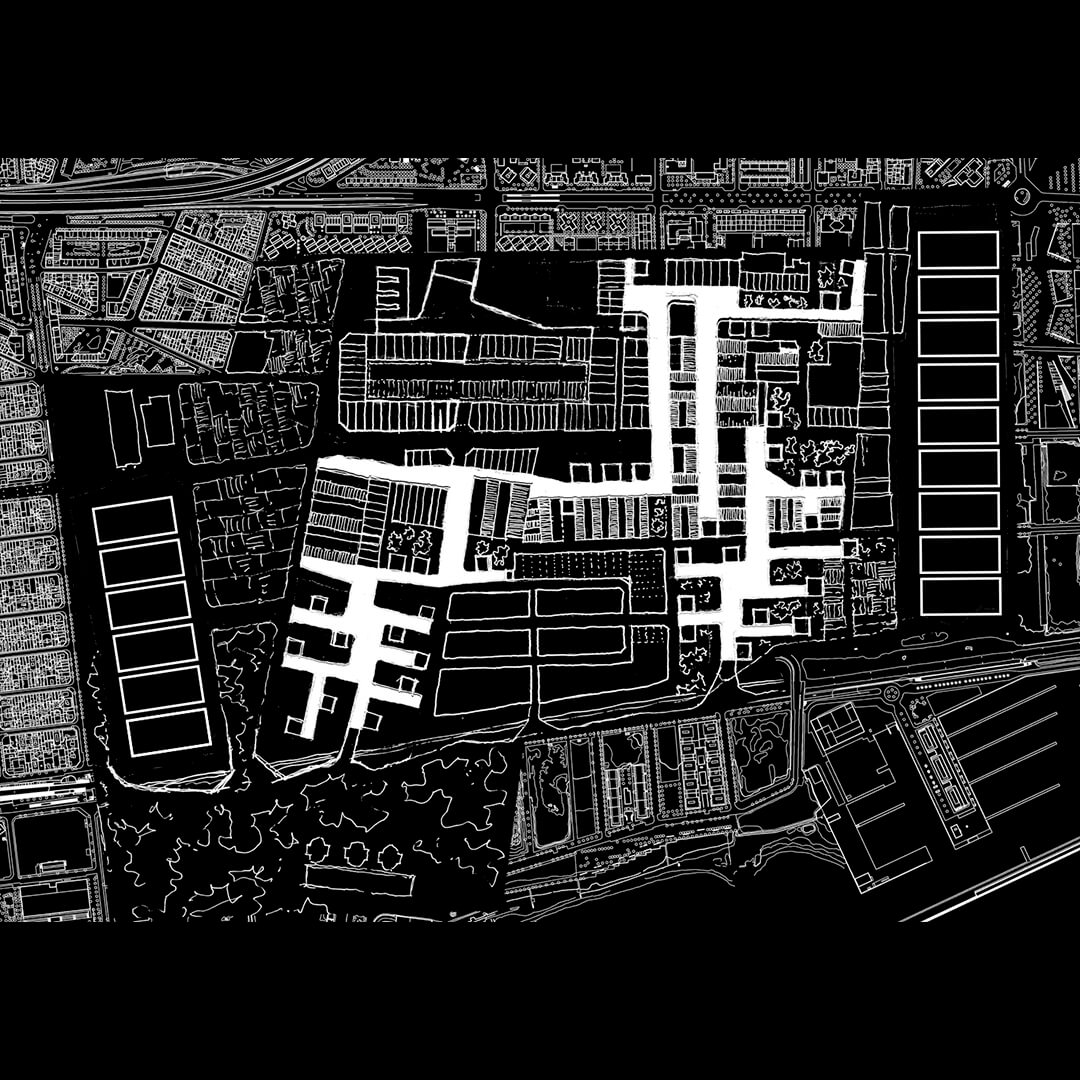 The project proposes to discuss the regeneration of an area defined from the beach to the west, through the streets of Alfonso XII to the north (parallel to Gran Vía) and of Tortosa to the east (next to the new port) and by the dry railway line in the coastal strip. Given the values of this industrial space, the ambition is to transform it with the introduction of new volumes and new mixed uses that respond to the true potential of this sector, rejecting any hypothesis of massive residential replacement and “tabula rasa”. An intensification similar to that of other areas of the city is imagined, taking the urban parameters of 22 @ as a reference.

The first phase of intervention consists of the removal of those buildings that are older or in worse condition. 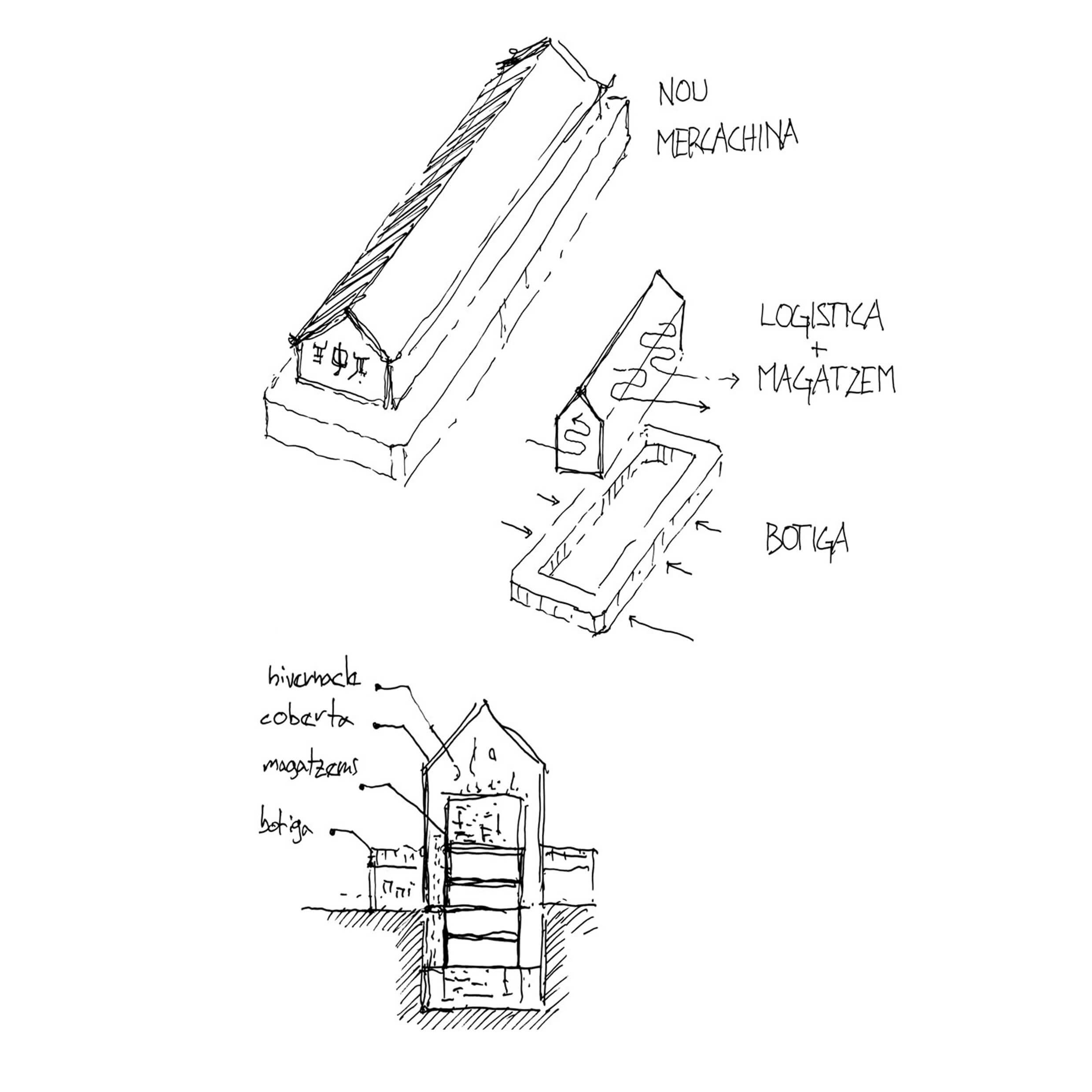 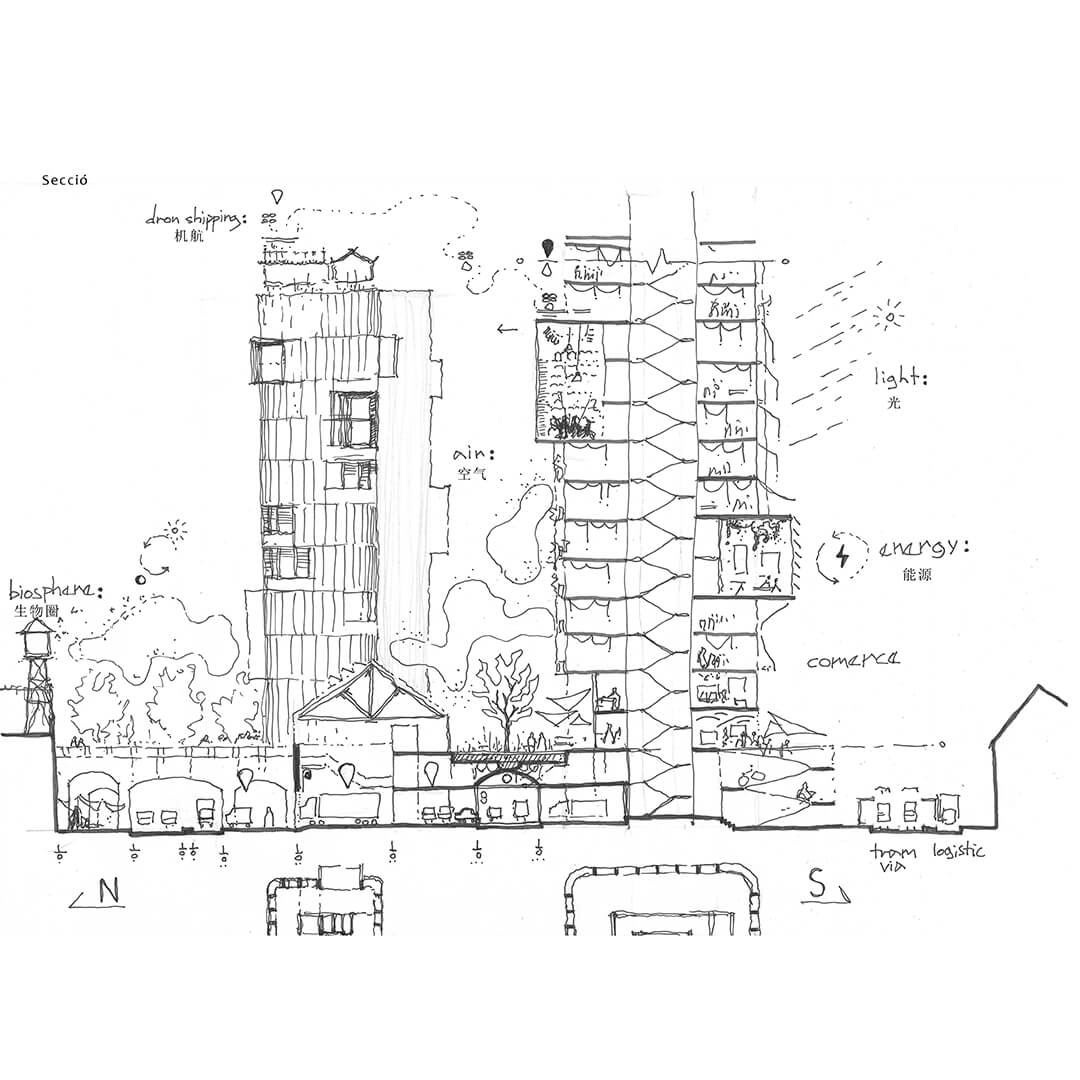 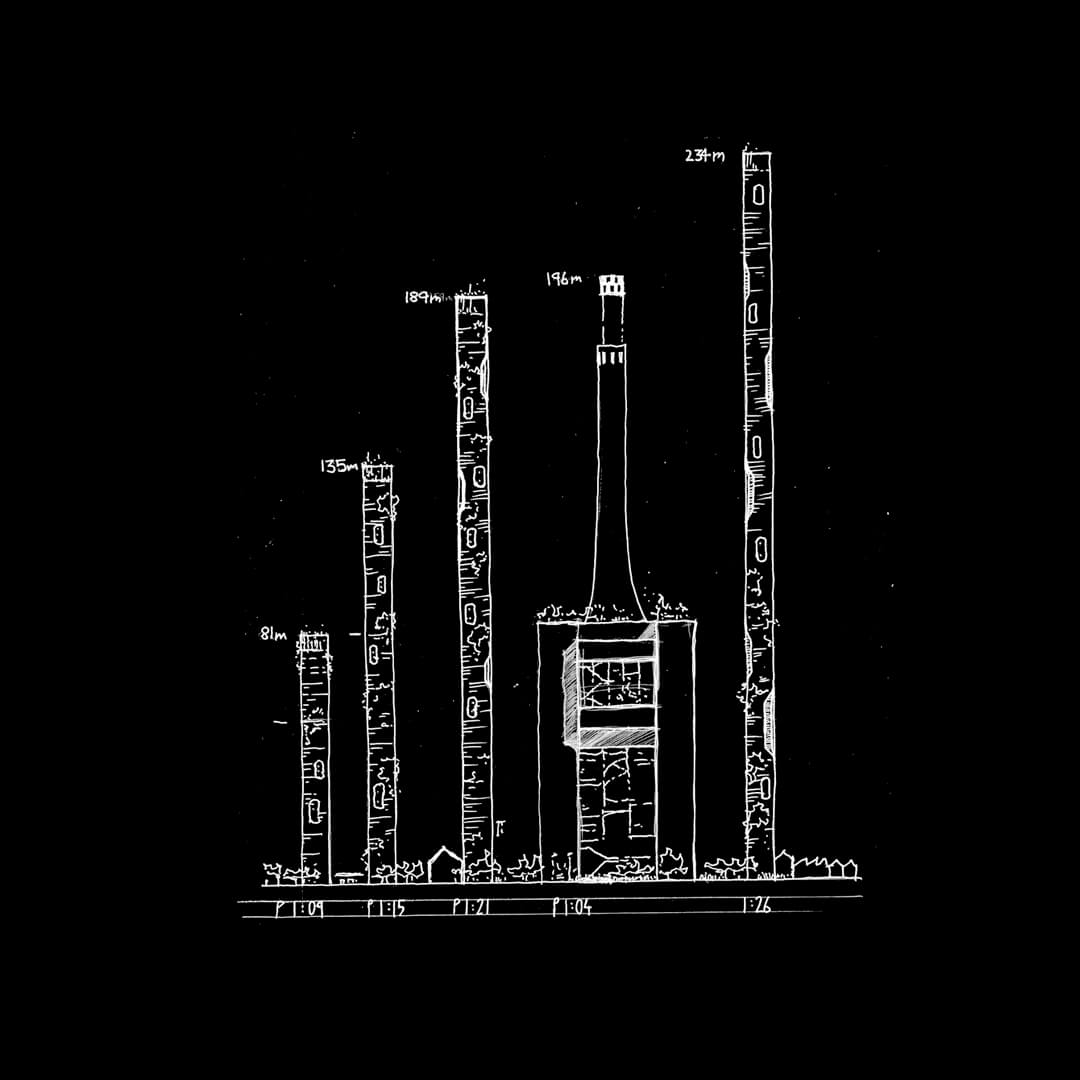 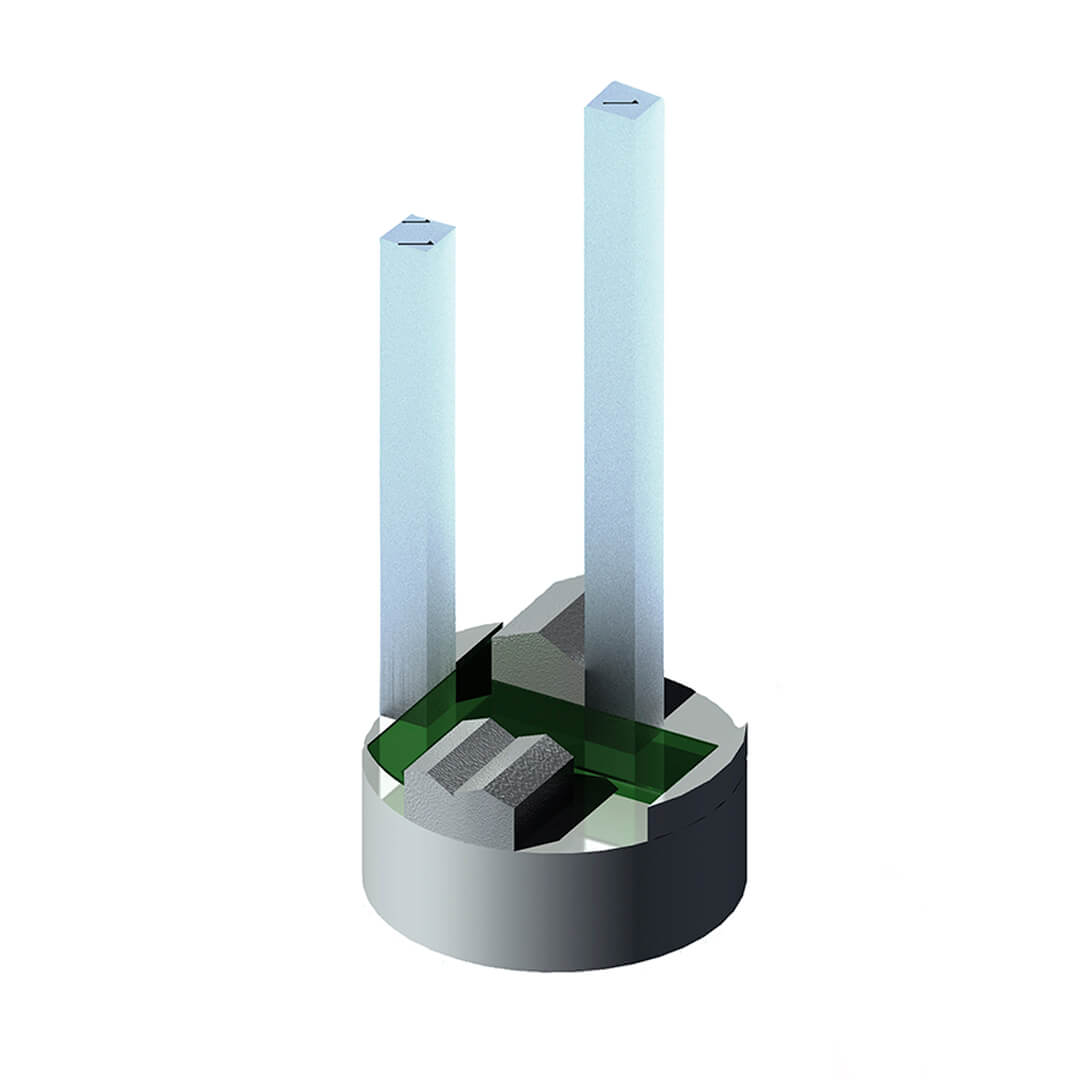 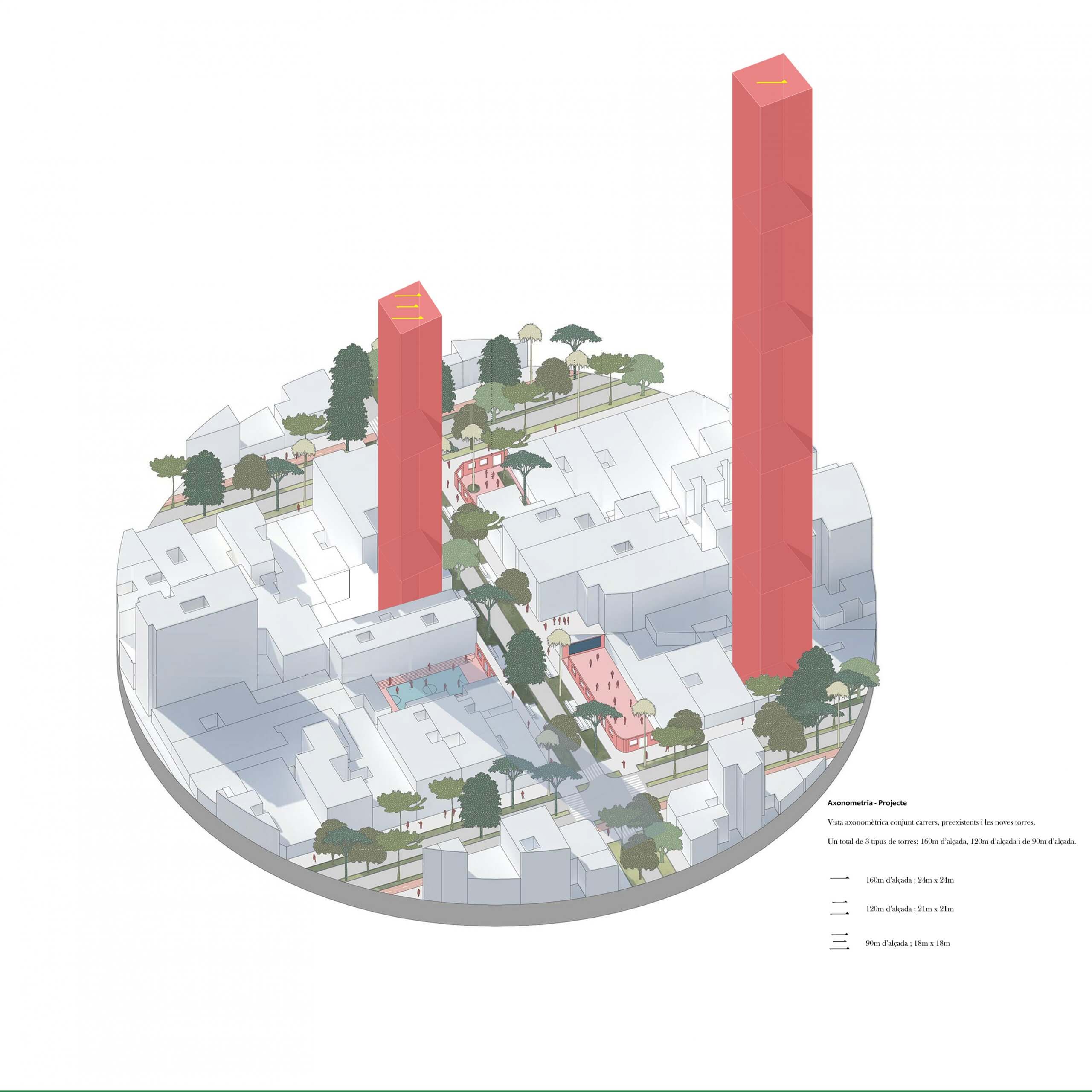 The new plan that emerged after the first intervention will present new spaces and new possibilities. The project will be divided into three parts, where the central part (industrial area) will be the part that will concentrate all the protagonism of the project. All three projects will be carried out at the same time. In the limits is where new houses will be built in the neighborhood. There will be a new large green / public space, which will pick up the existing Besòs green step and expand it, so that it reaches the interior of the city. That is why the neighborhood urgently needs to “breathe”. Finally, in the existing industrial estate, a series of interventions will be carried out that will especially change the image and the functioning of the neighborhood. 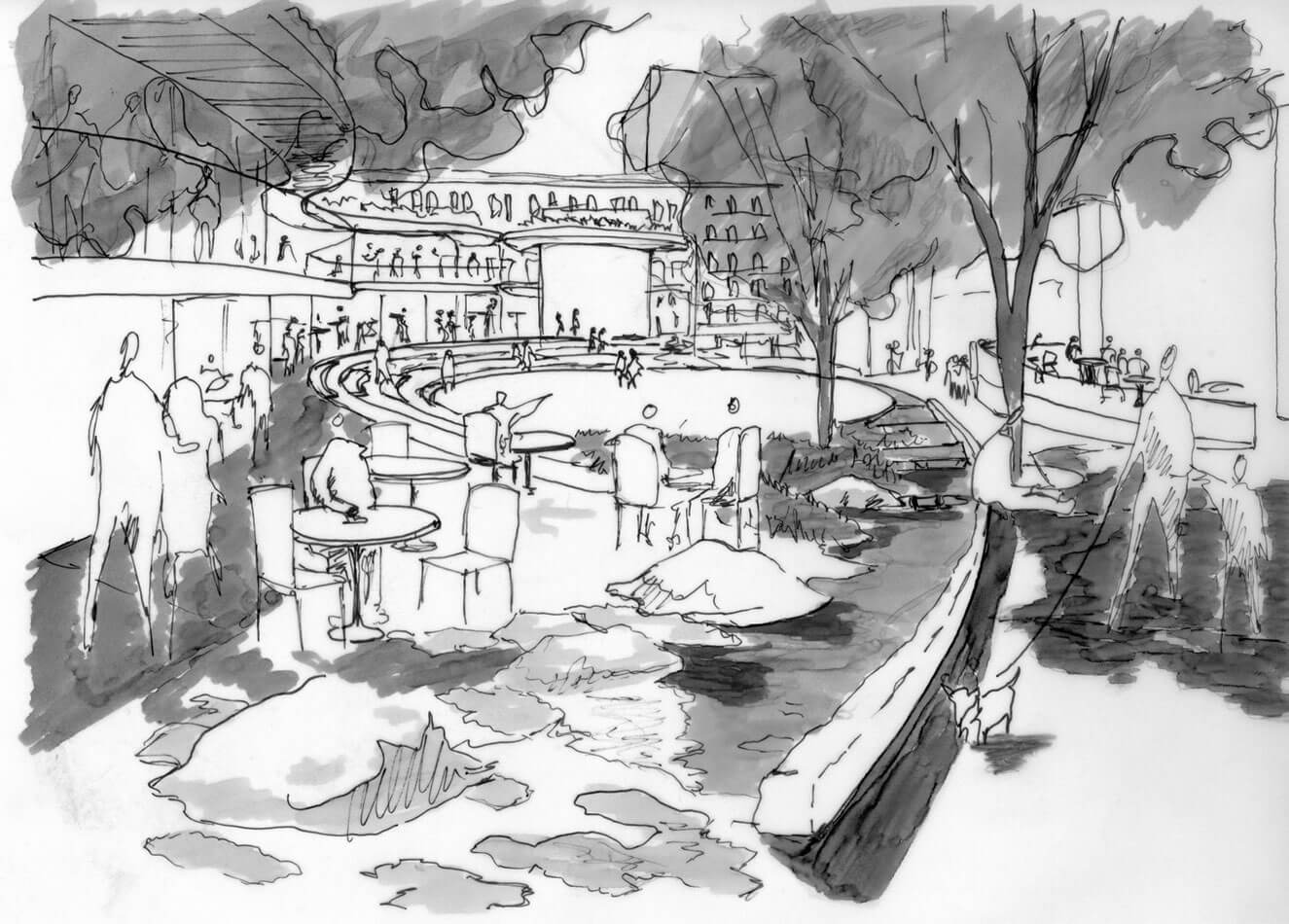 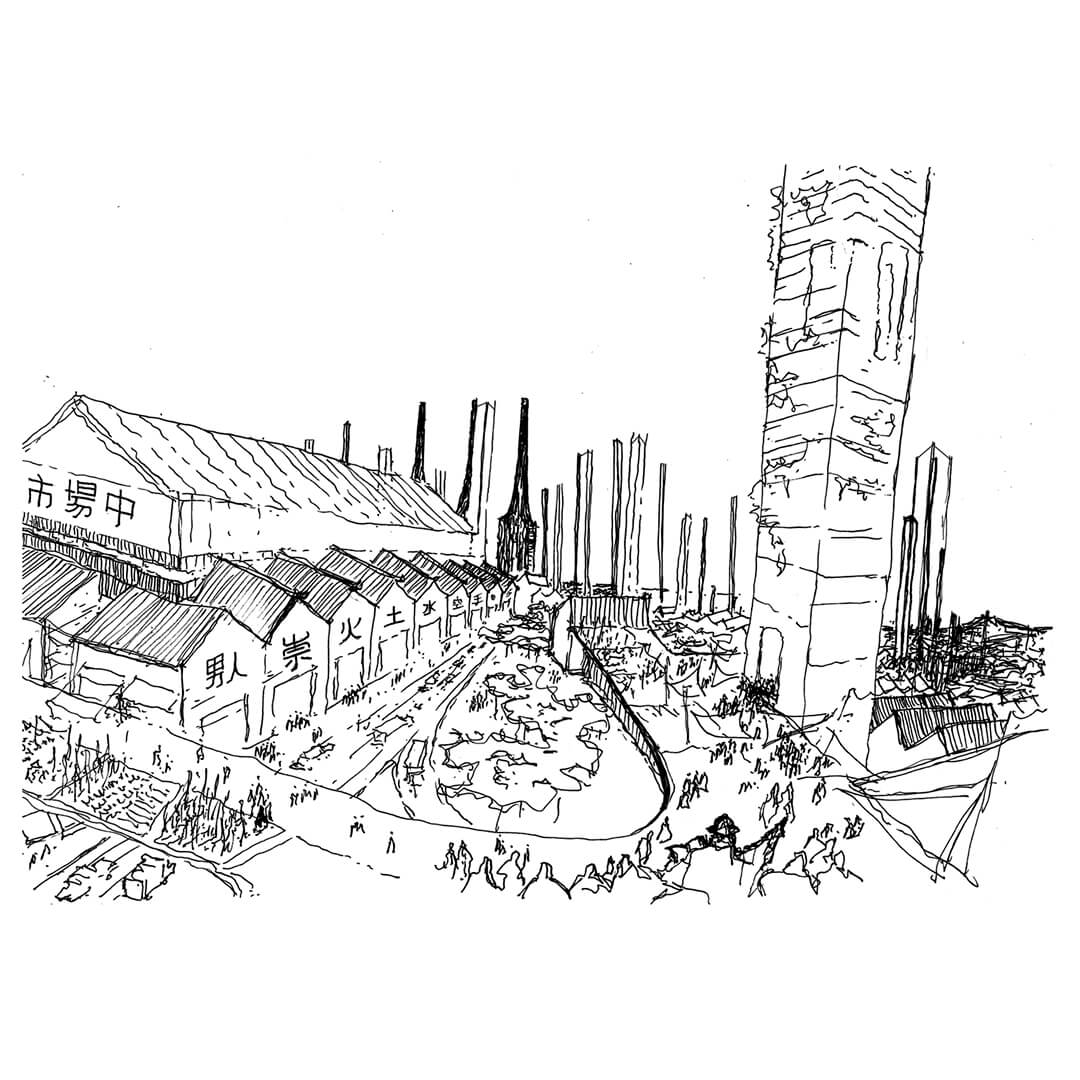 This last phase will focus on the industrial area where a new “China Market” will be built, which will consist of a centralization of the existing department stores, creating a more comfortable space with easier access. A new structure that would become a more comfortable, elevated second street that would serve as a connector between the towers that will be built simultaneously. These towers would be divided into parts more dedicated to housing, and also an office area, etc.