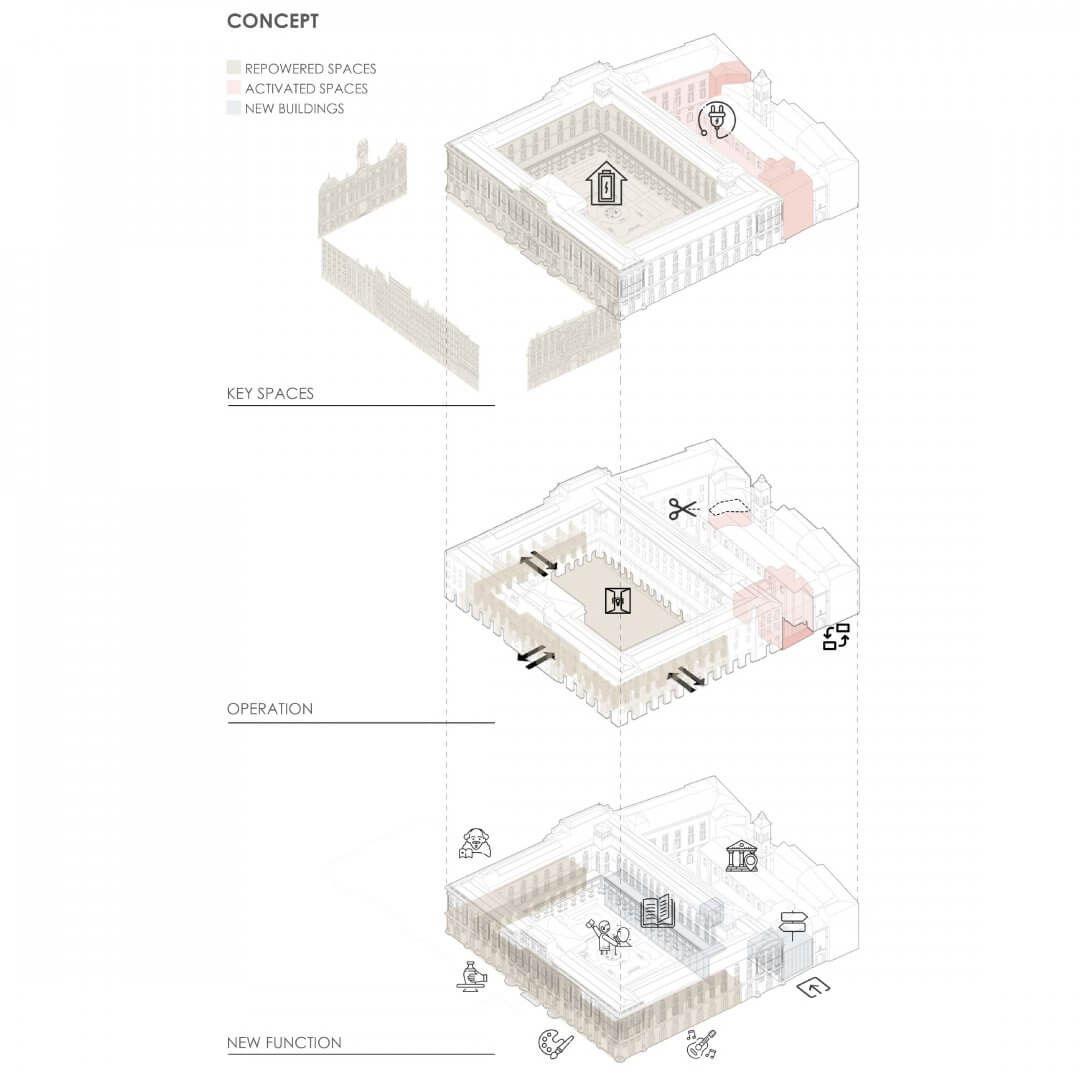 The Fine Arts Museum of Lyon is located in the Palace de Saint- Pierre overlooking Place des Terreaux. The Palace, in baroque style, was an abbey with a central courtyard that hosts a beautiful public garden. On the opposite side of the main square, a lot of residential buildings surround another potential courtyard and the church of Saint Pierre, which is part of the museum. The Romanesque church can be seen only from a small square, Place Meissonier, opposite the entrance gate. 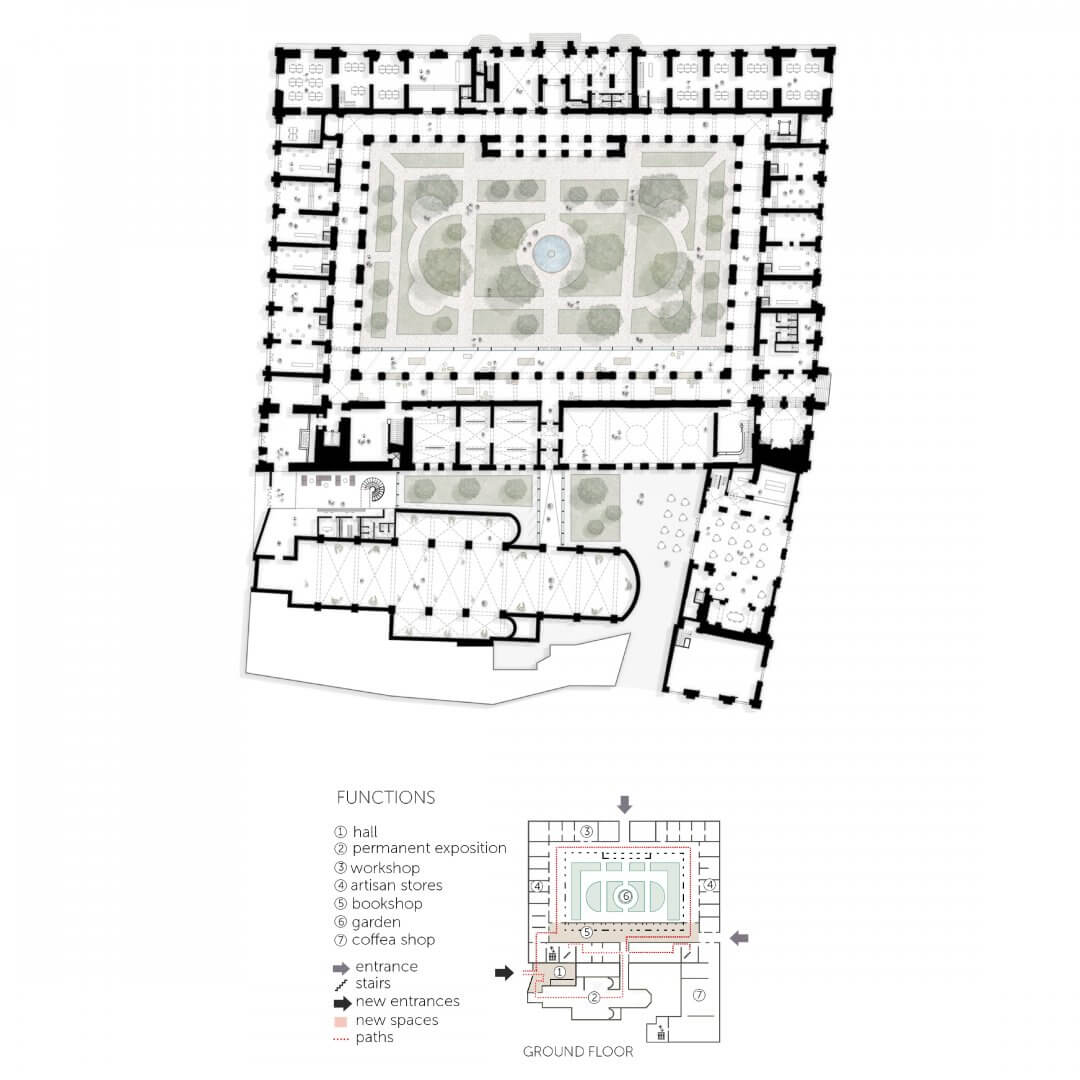 Our project has focused on reconsidering the values and the functions of the spaces on the ground floor through two main objectives: to enrich the courtyards giving new functions to the spaces next to them and to add value to the museum with a more attractive entrance and new routes. As concerns the first objective, we have started with the functionalization of the commercial units that open on the street. They have been considered ateliers that can be rented to artists and artisans. Our project includes a glass building with a light steel structure leaning on the arcade in the south facade of the courtyard. This volume reveals the ancient building and hosts bookshops and relaxing spaces for the visitors of the museum. 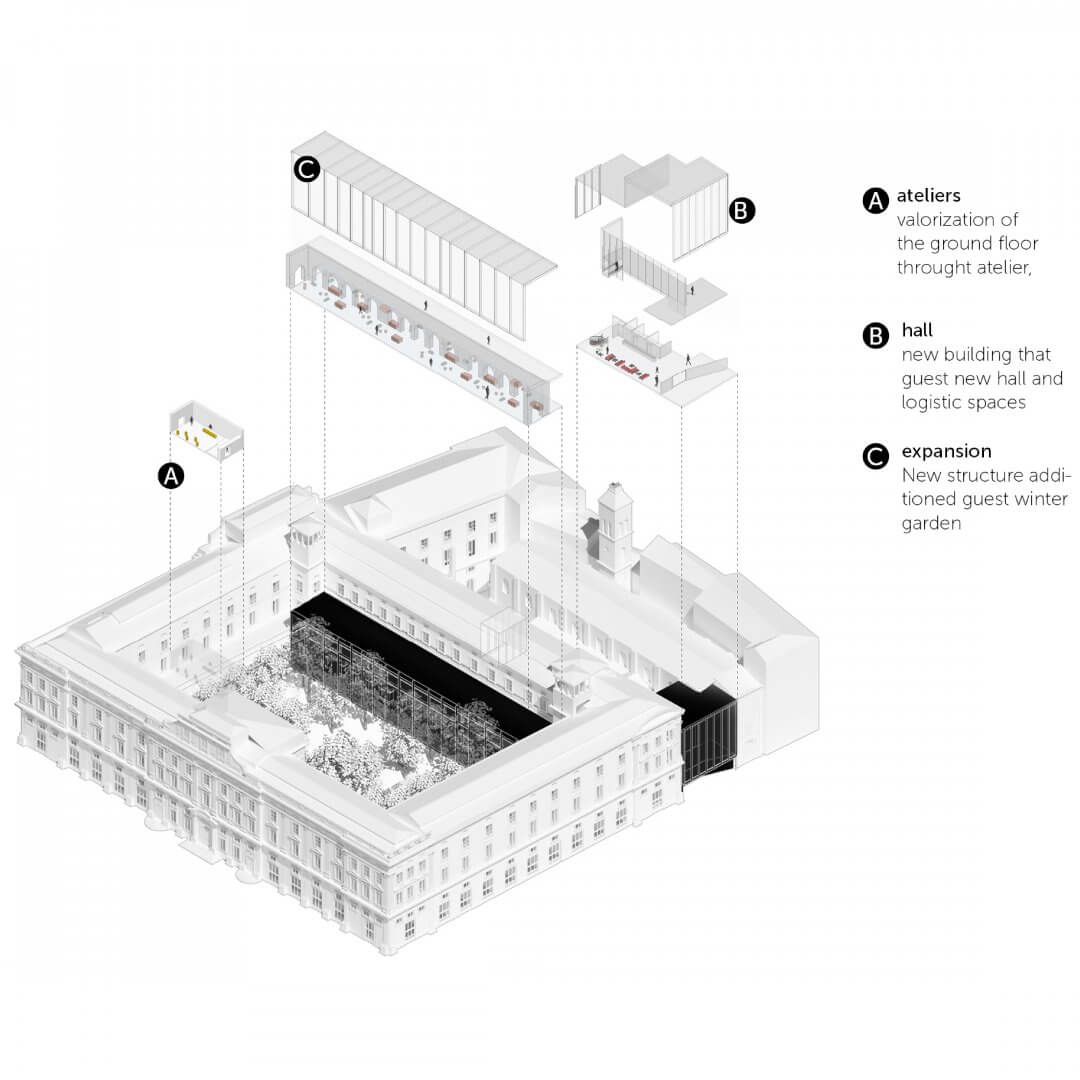 The other objective focuses on the museum. The project provides a new entrance in the Place Meissonier that gives the museum a direct relation with the public space of the city. The existing building between the church and the abbey is replaced by the new building of the museum. The vertical steel structure reminds the language of the new volume in the courtyard, which in this case is covered by a metallic net. Inside we find the ticket office and the cloakroom lighted by a big glass wall. Exactly from the church starts the new route of the museum. After the tour of the museum you exit from the stairs next to the refectory and this is the last hall before visiting the courtyard and going out from the new welcome space. 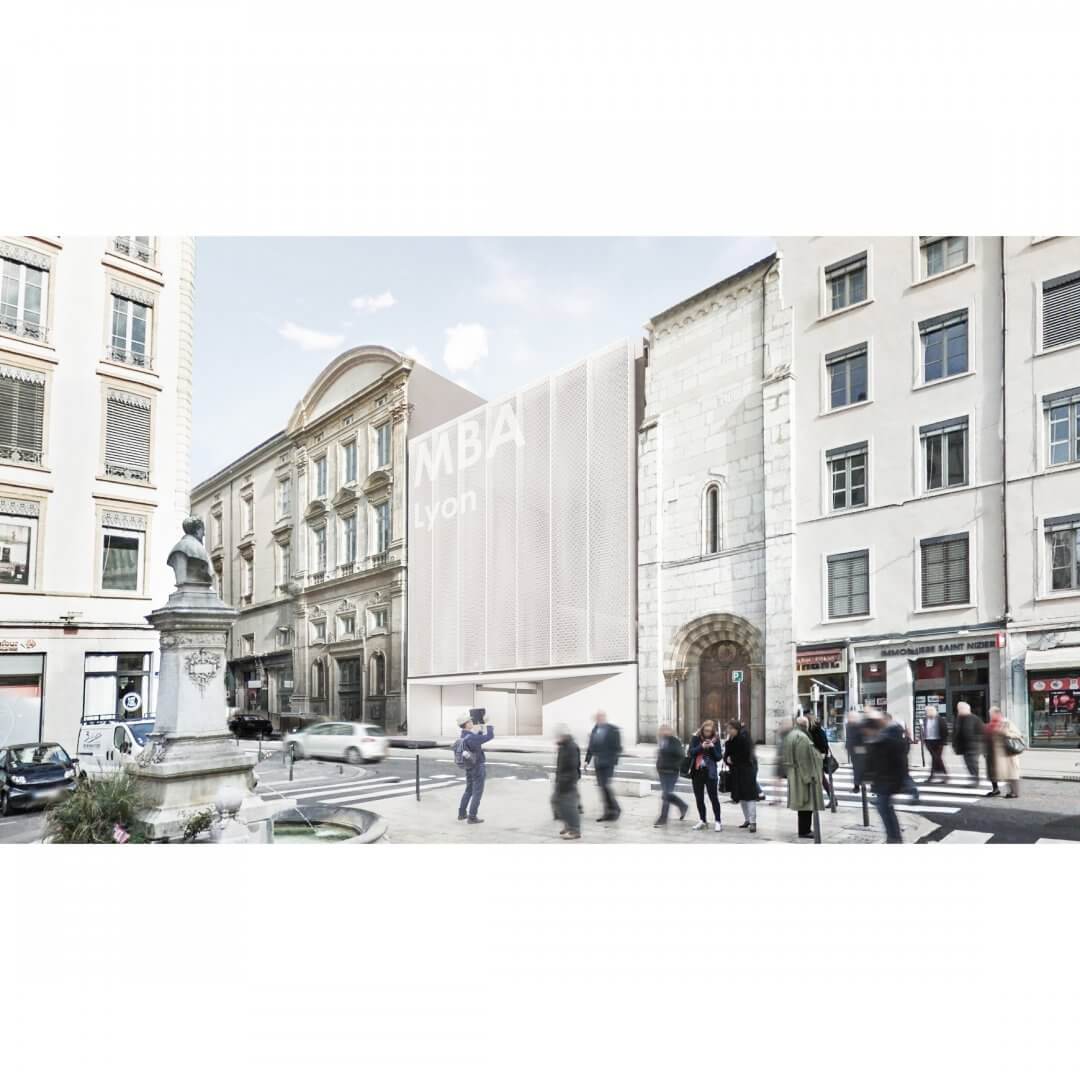 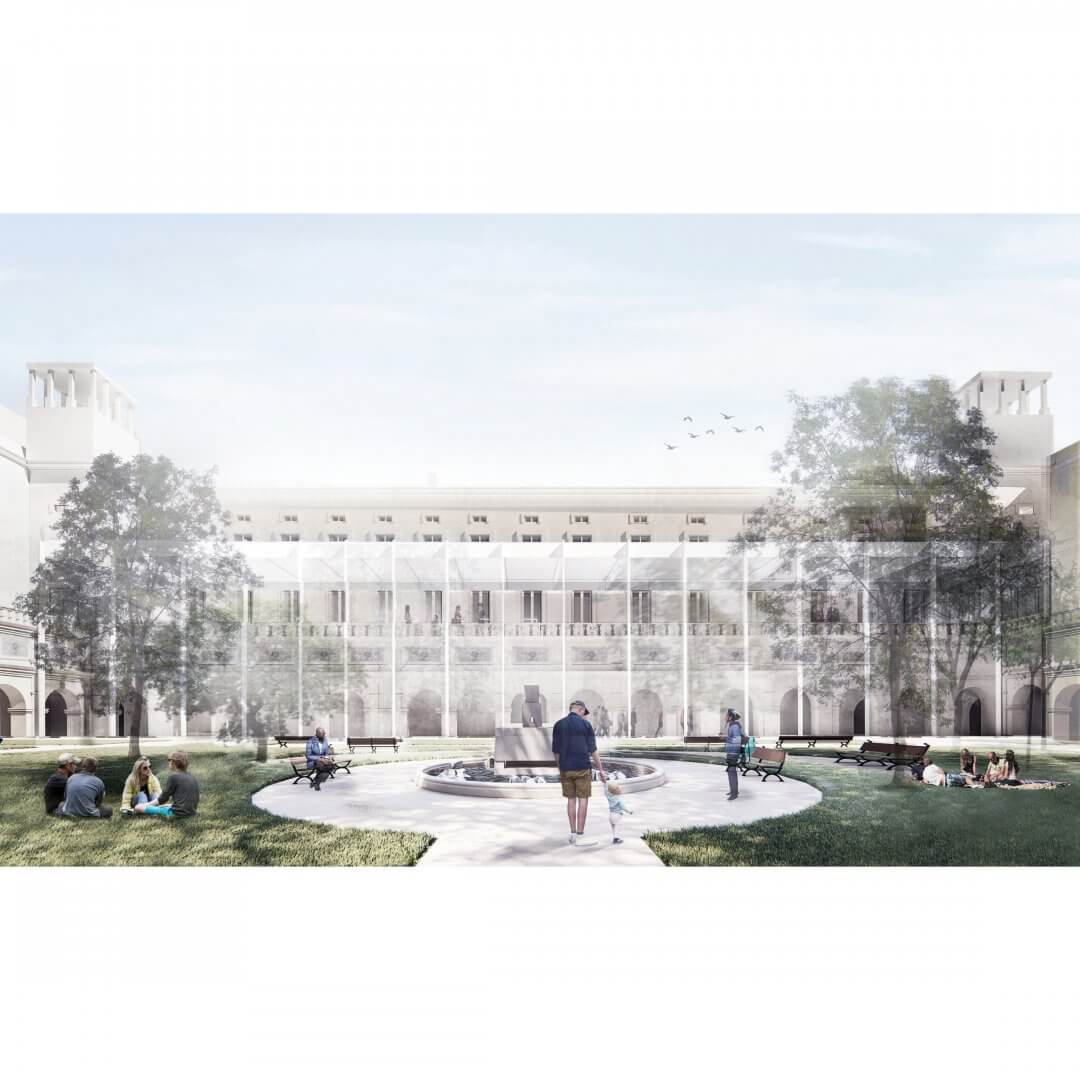 As part of the project, the lighting has been completely rethought for all environments, we opted for a light at 3000 degrees kelvin to make the spaces welcoming and bright. The luminaires selected are indicated in the scheme of board 3, they have been selected among the wide collection iGuzzini studying the different illuminations of the various indoor and outdoor environments. The façade of the new entrance is characterized by a microperforated network illuminated evenly from the inside, creating suggestive lighting on the street.