The exile of the silos and their new transmutation is just the beginning, the process of the coastal deindustrialization of Lisbon begins here.

Like other cities in the world, Lisbon remained one of the coastal capitals with the greatest maritime influence of all time. Meanwhile, in the mid-nineteenth century and with the arrival of the industrial revolution in Portugal, the city modified its entire coastline with new lands, which gradually adapted with the arrival of new manufacturing companies. To such an extent that from the year 1871 a new industrial land was created reclaimed from the sea. This large concrete slab anchored to the seabed encouraged the arrival of new industries of all kinds, until finally, they managed to block our way. A physical, visual and insurmountable barrier. 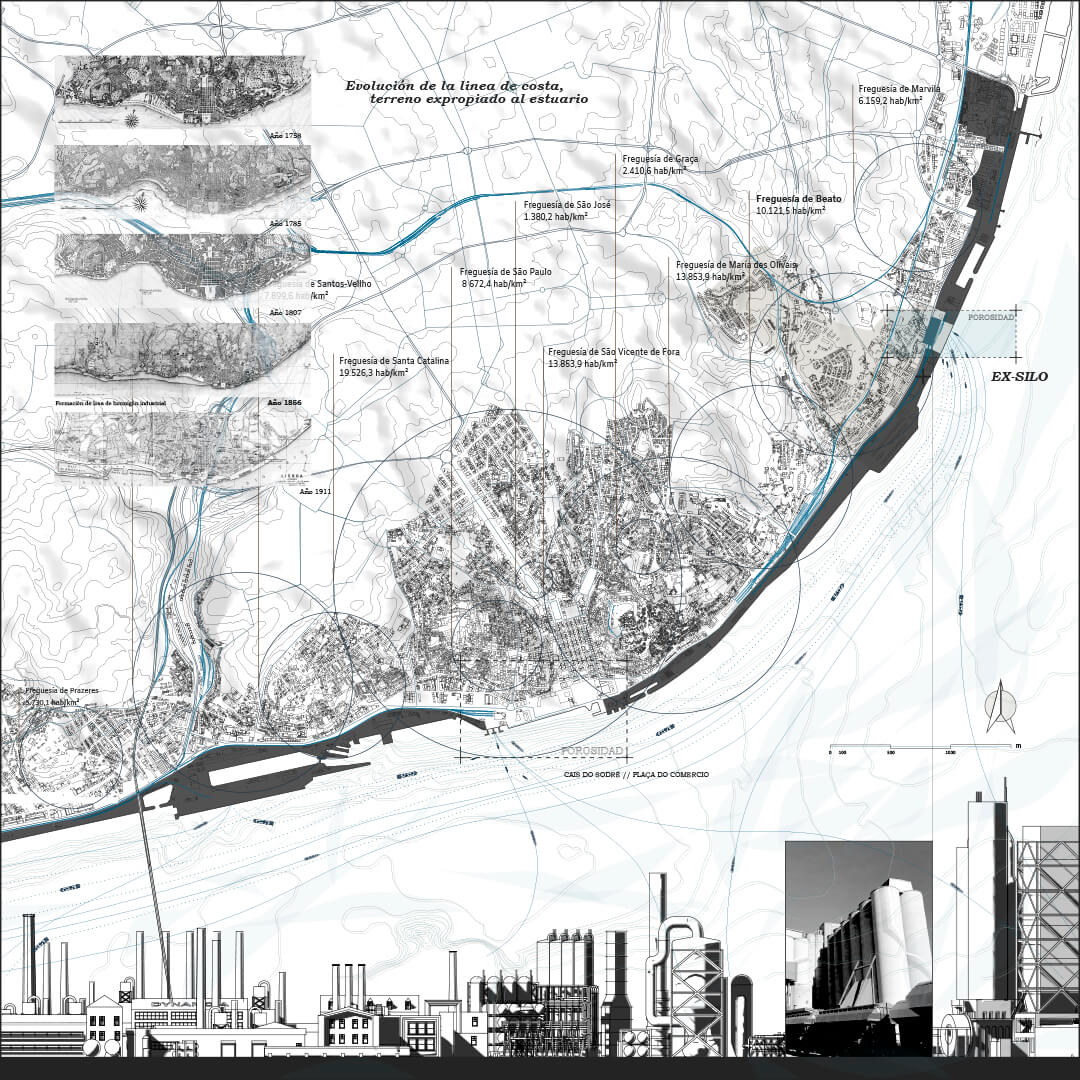 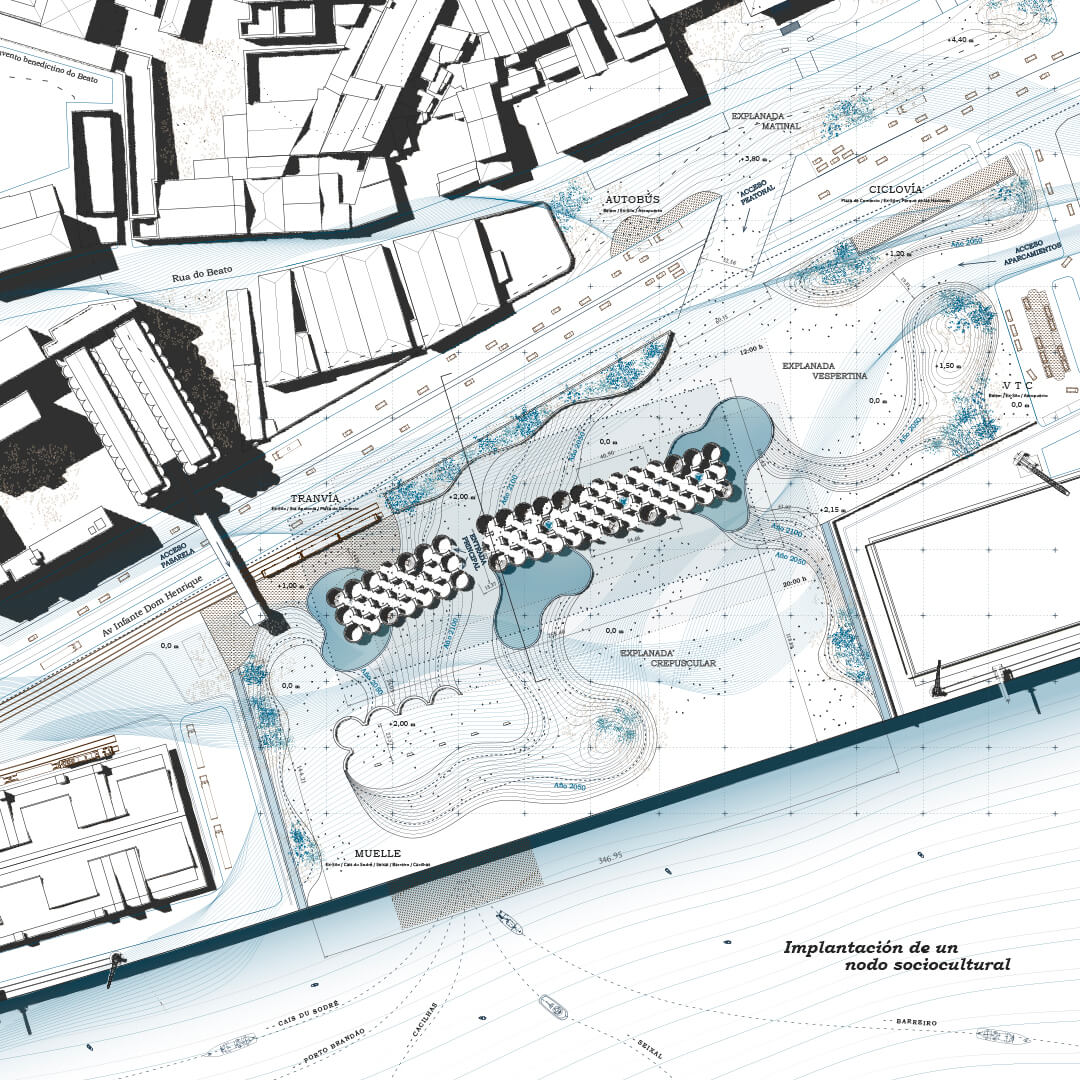 At a time when this industrial use does not require so much space in the city, the administrations end up promoting a series of selective demolitions on some of these industrial landmarks. However, the waste and costs of this initiative are not quite adjusted to current sustainability. For this reason, we seek to create a new space capable of providing activities and benefits, without losing the history of its ruins. We are looking for a new urban porosity.

In search of a way out for the population to the estuary, we arrived at the parish of Beato, an urban area located between the historic center of Lisbon and the new Campo de las Naciones. Anchored in a purely commercial and productive past, are the vestiges of the old storage company Silopor that, due to business decisions, decided to move its headquarters to Trafaria located on the edge of the estuary. Its main infrastructure was based on container elements for the storage of grains, mortars and low-density liquids. Thus, they mobilized all the machinery provided with a metallic structure, but they had to abandon their large building. 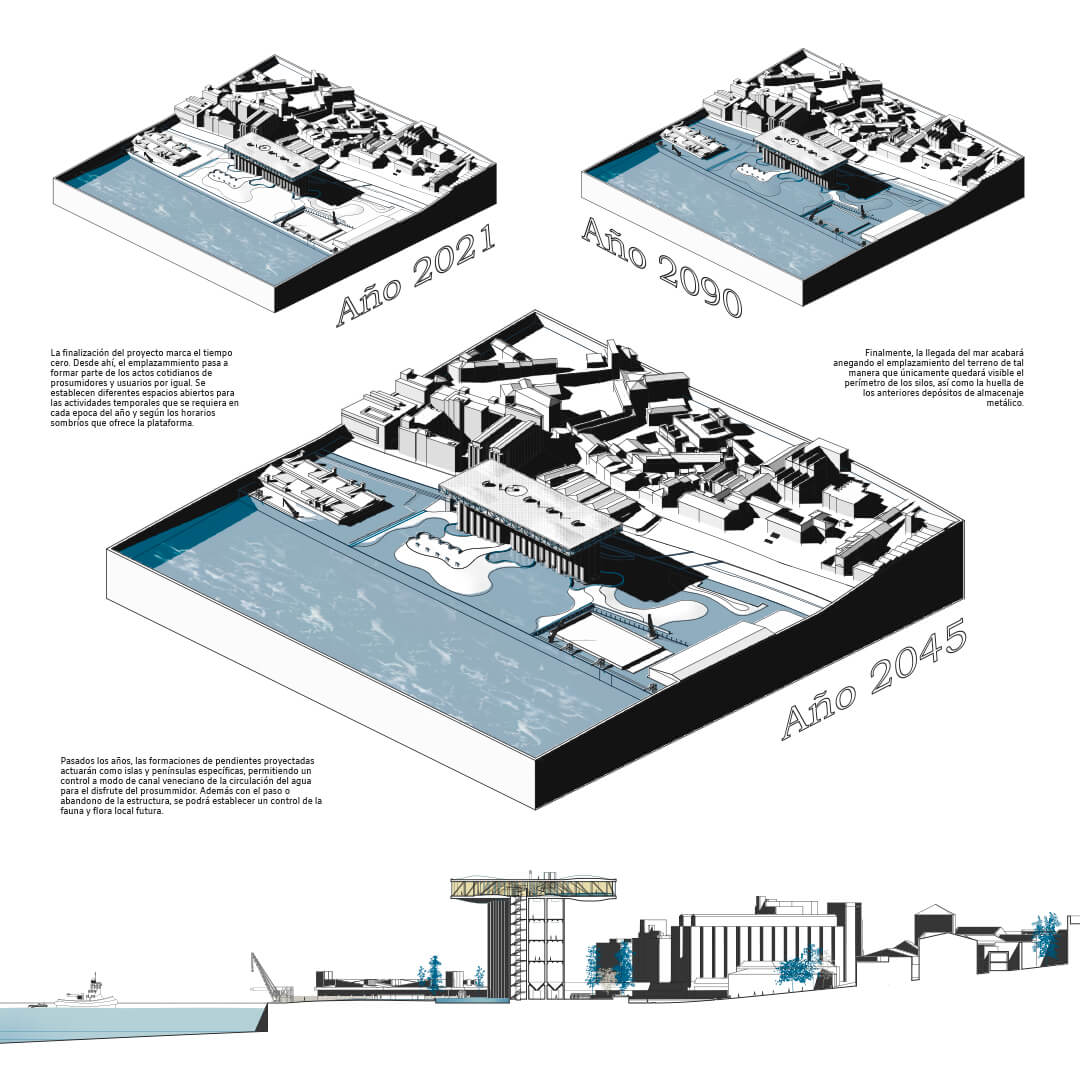 A set of 60 T-shaped reinforced concrete silos that, divided into two rows of 21 meters wide, colonize the visual space reaching 40 meters in height at its head, thus forming a wall for the viewer. Constructed by means of a sliding formwork, they are located on a foundation slab measuring meter eighty deep, anchored in turn on the land expropriated to the estuary. On this infrastructure, a transmutation of the ruin and a new location permeable to the public is proposed, all in response to the actions of a key user: the prosumer. 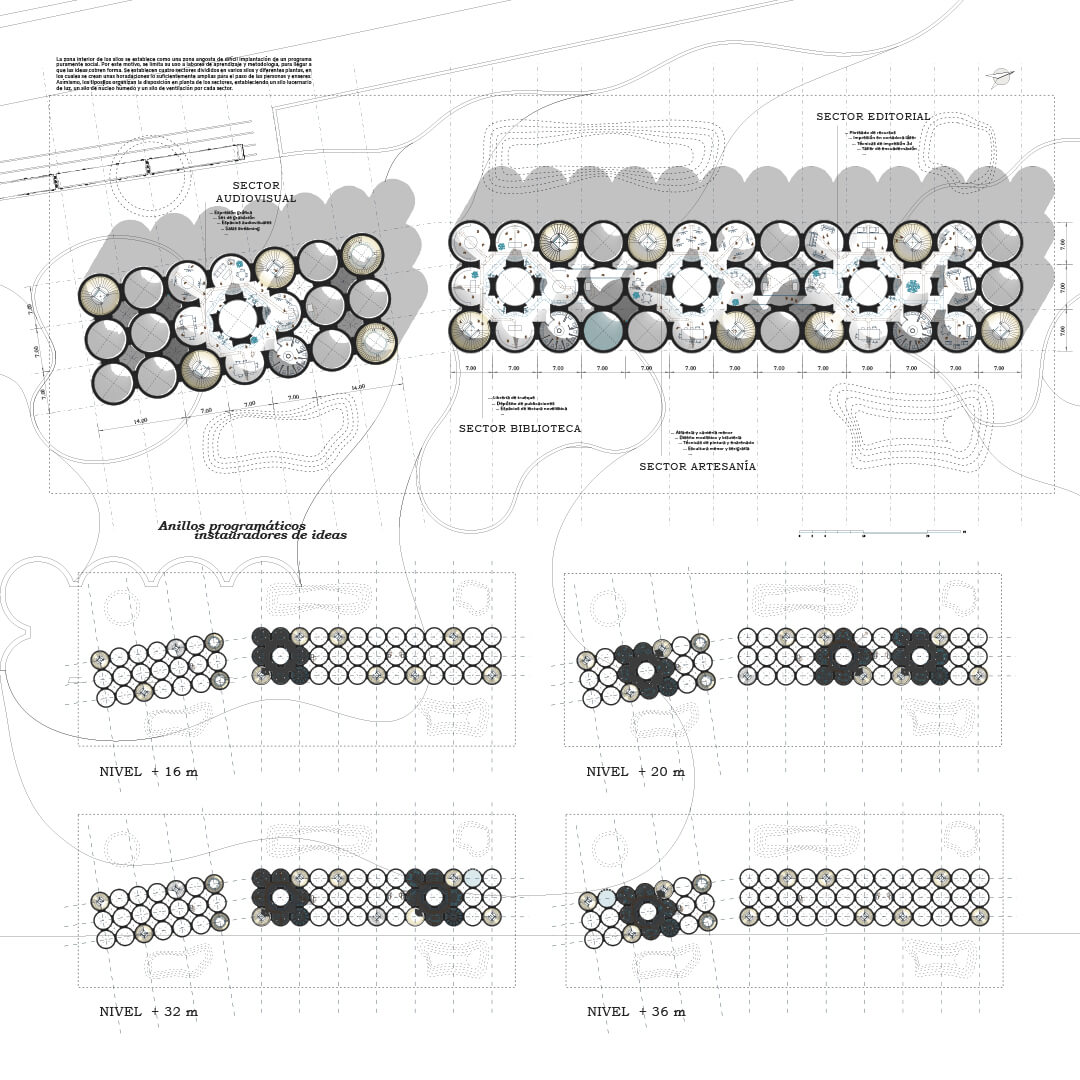 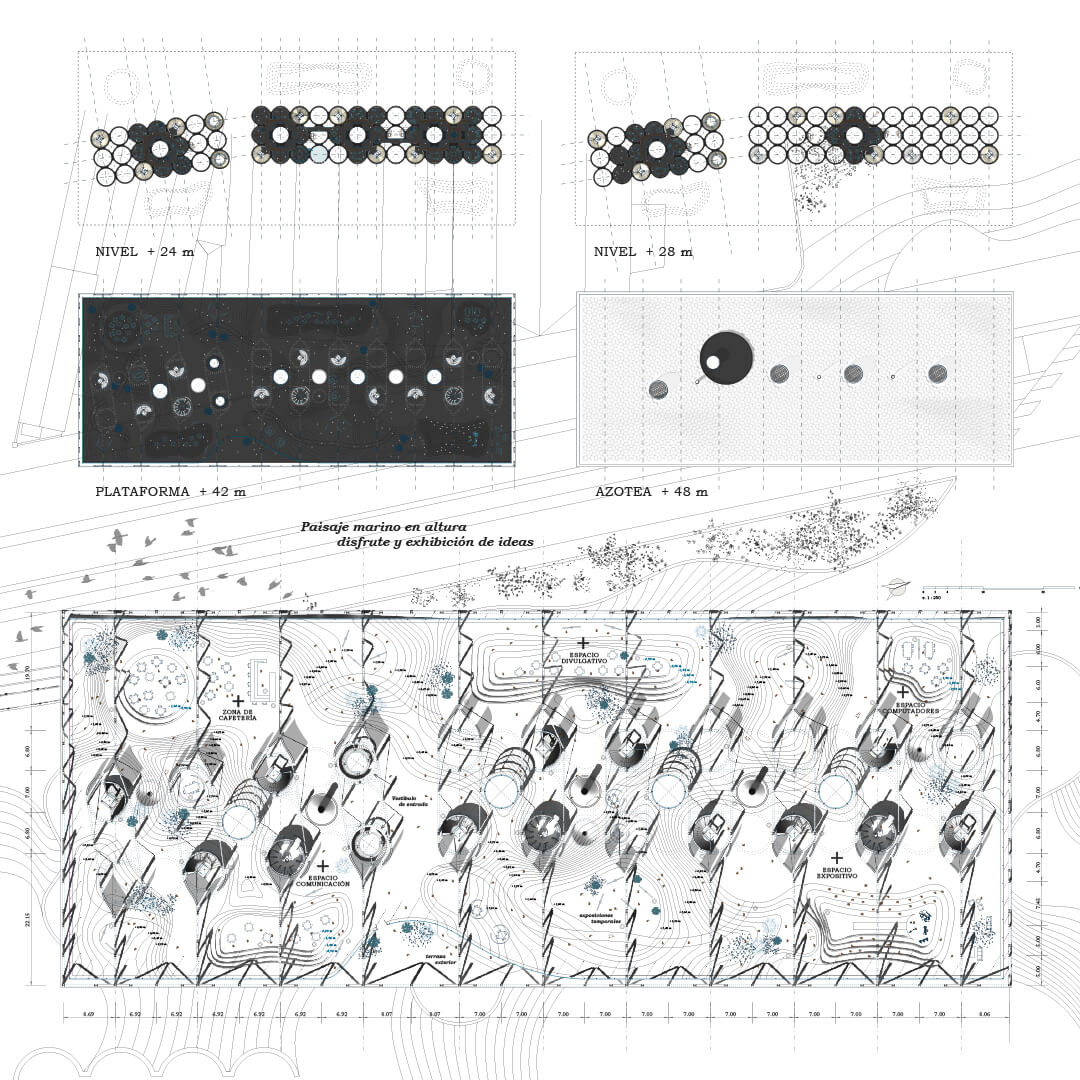 This type of user, involved in the production of services and goods, will be in charge of generating a circular activity, capable of expanding to different larger-scale environments. This cycle, in turn, will trigger the transmutation mechanisms of the silos: the capture of an idea, its creation or materialization and the final exhibition, which may be the object of new interests for others. In this way, we will carry out an intervention throughout the site with the intention of attracting and attracting the largest number of participants, thus creating a new attractive focus for the metropolis. This sociocultural node is conceived as the great rupture of the industrial fabric between the multipurpose terminals of beato and poso do bispo. In addition, thanks to its previous connection, it obtains all the communication of public transport to date, thus communicating with the entire peri-urban area of ​​the city.

As expected, the great magnitude of the existing building generates specific shadows at different times, so the project contemplates the implementation of three esplanades with differentiated uses for three hours a day. To the whole of this design, a series of topographies of the terrain are added that range from zero level to two meters in height. A reminiscence of the expropriated maritime landscape, as a proposal to an inexorable complete flooding by the rise of the sea. 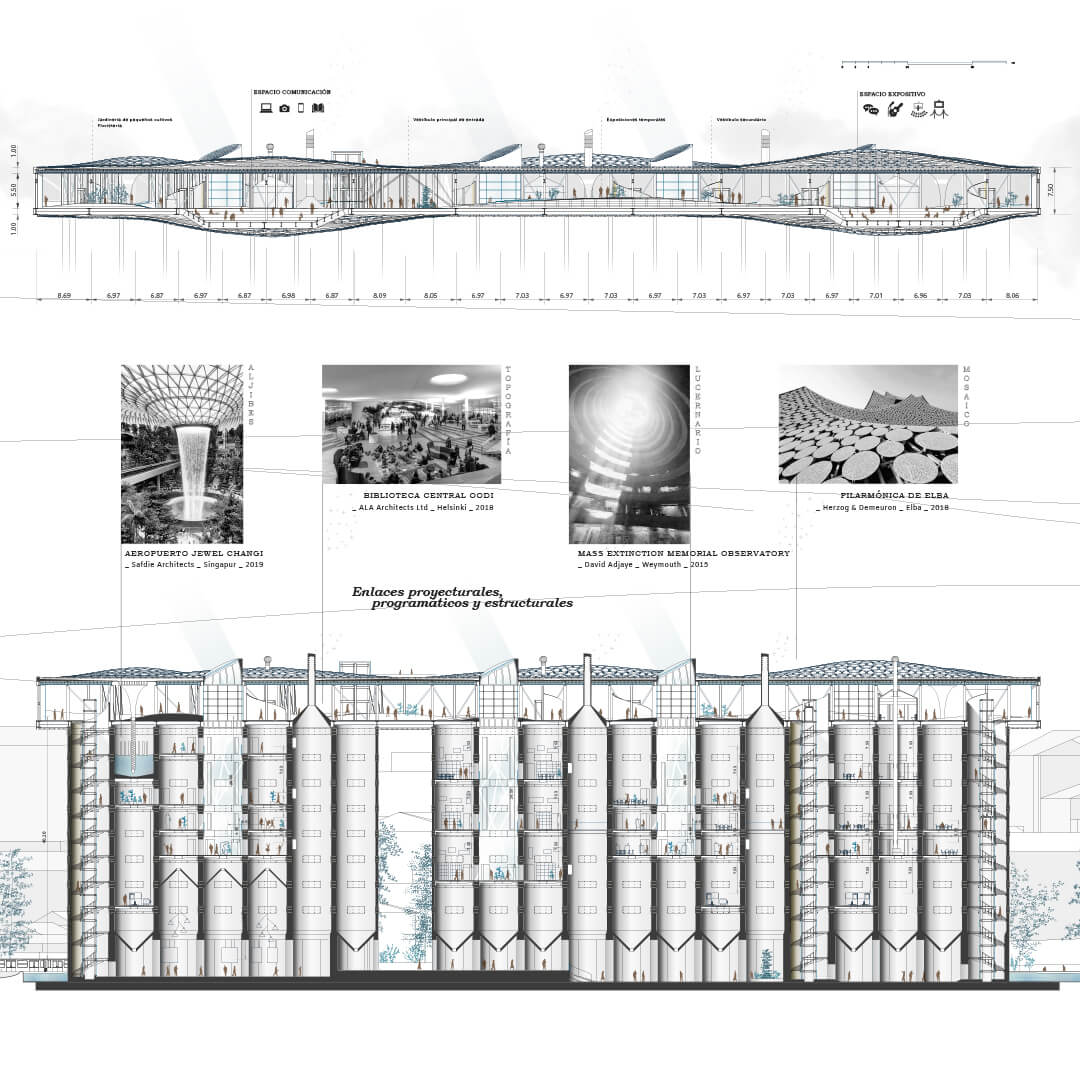 The main route of the building coincides with that of its previous use: from level 0 there is direct access to the upper platform, where it circulates horizontally until it ends up descending to the four intrasilo sectors. For the development of the creation and exhibition, an inverted structural conception is proposed, in such a way that, after emptying, a metallic structural frame of self-compensated cantilevers is implanted in the head of the silos, whose weight is barely a third of the interior content previous. The imposition of the upper structure will generate a bending stress due to buckling in the exterior concrete walls, which is solved by means of programmatic steel rings that confine and stiffen them.

Therefore, in the creation area, some collaborative sheet metal floors are established supported on a grating of four variable section beams, which rest on a circular IPE 500 attached to the wall of the silo. Thus, a homogeneous distribution of loads is generated and in turn allows the implementation of spaces designed for work and the introspection of the idea, where height is conceived as the fundamental element of space. 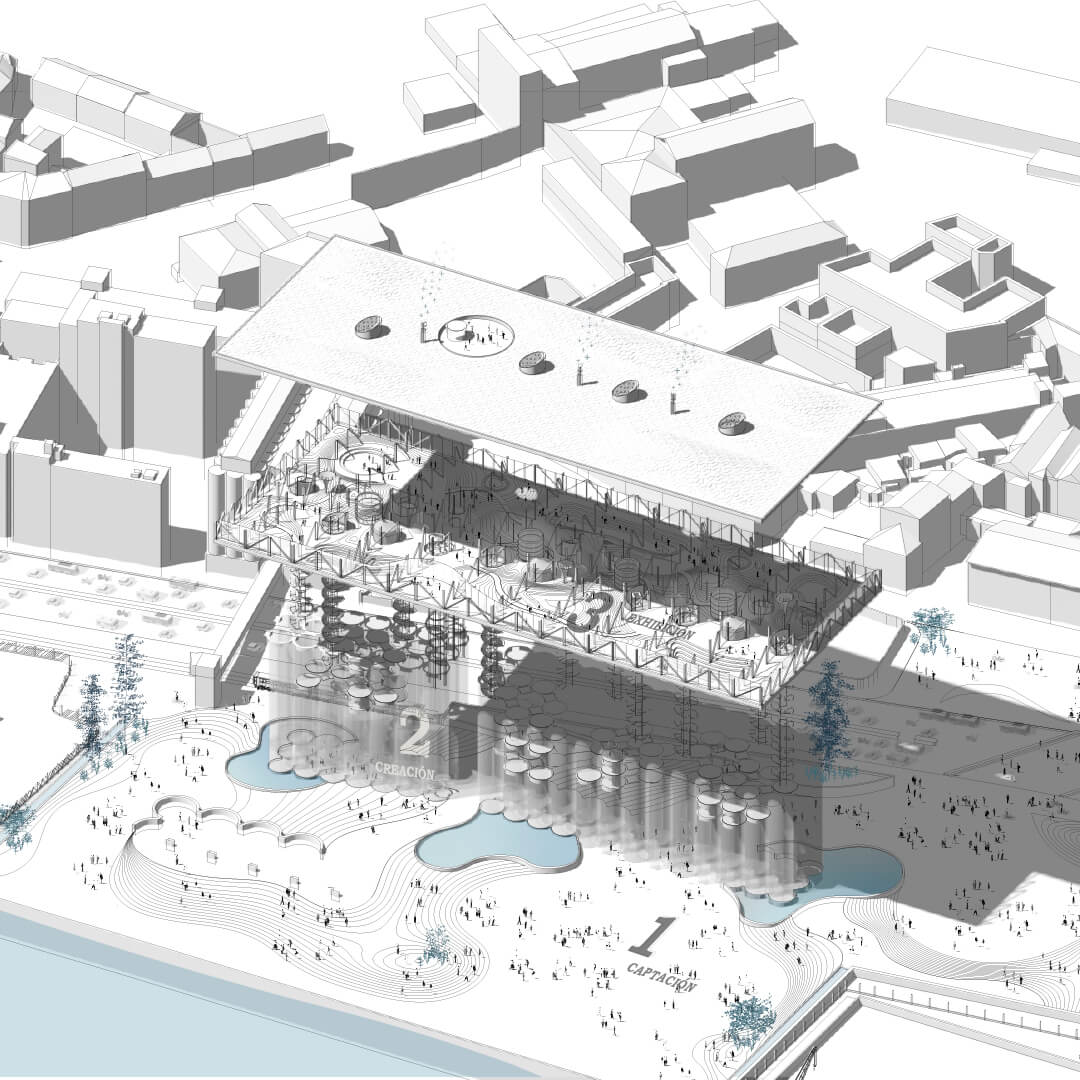 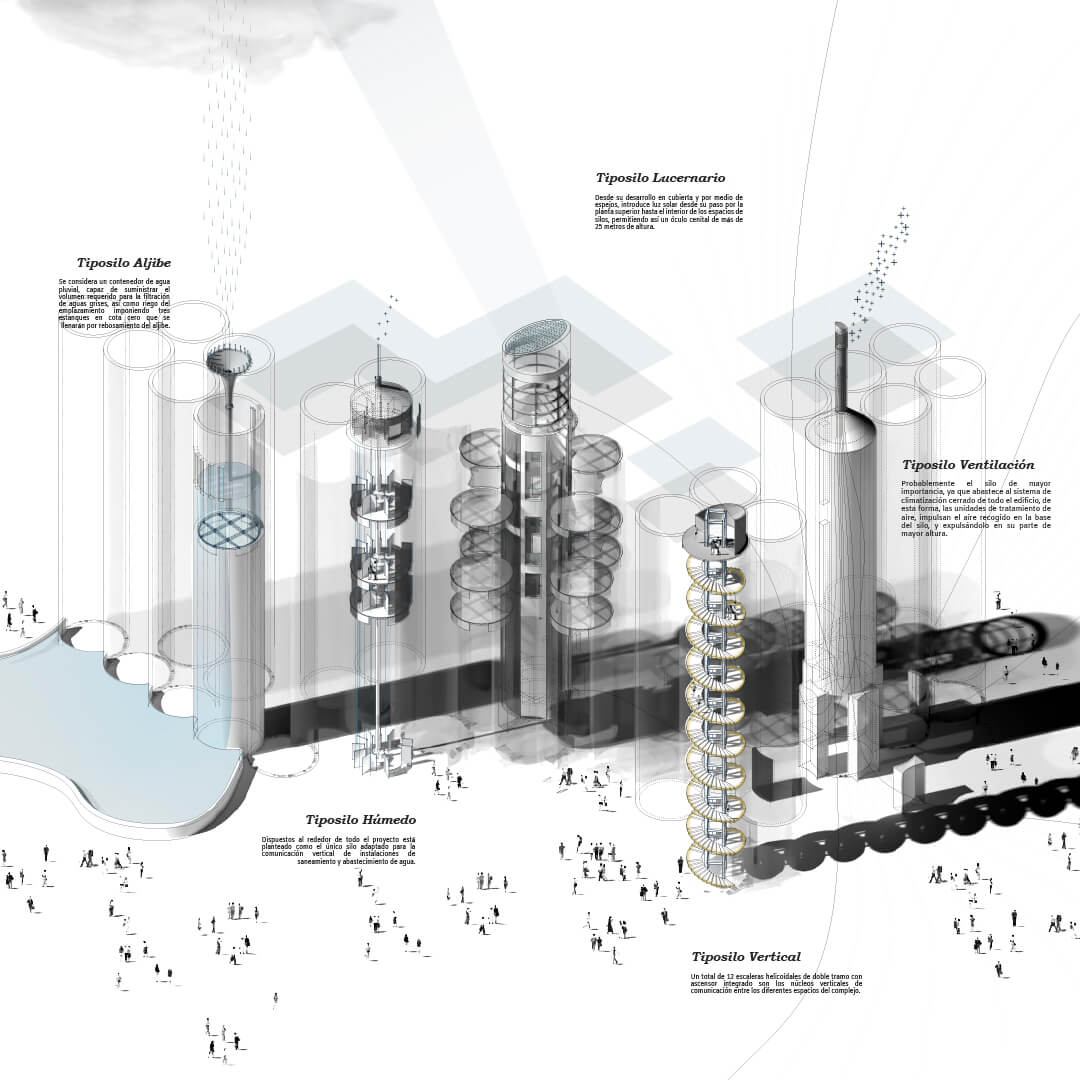 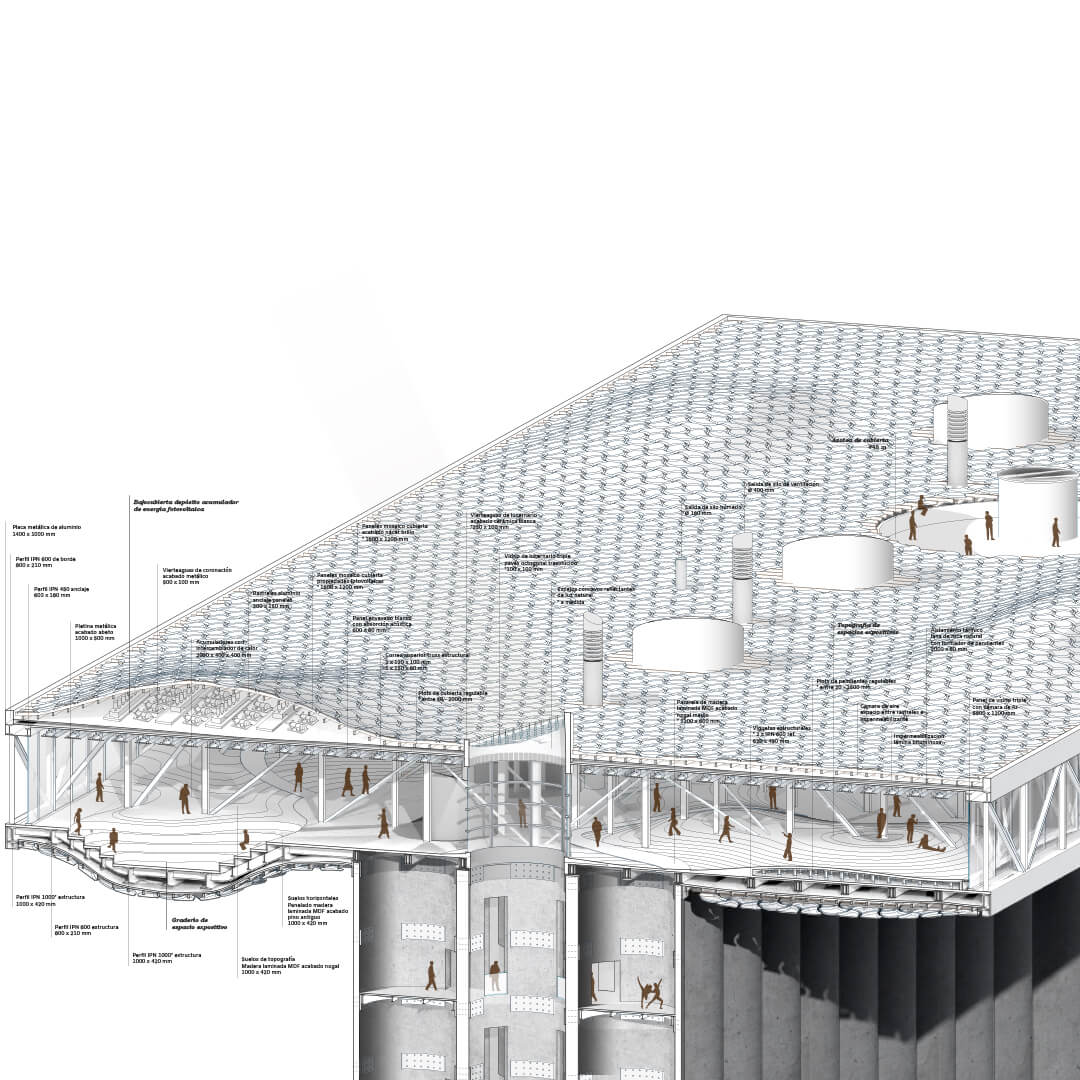 At the top of the prosumer, there is the platform corresponding to the exhibition, a diaphanous plan, continuous and permeable throughout its perimeter. As at level 0, an undulating topography is proposed at 42 meters high where a total of 5 main spaces are found in the depressions of this seascape. The elaboration of a total of 11 structural steel trusses with full web belts, form the basis of the complete spatial structure. Due to the design synthesis of the space, the minimum number of vertical elements will be established, which will be concentrated in the HEB profiles of uprights and diagonals of the trusses.

The interrelation between the three layers is achieved thanks to the typesilous, which play a key role in the correct operation of the artifact’s facilities. The cistern stores the corresponding part of the rainwater collected on the roof, for use in gray water and irrigation. From there, the excess water falls by overflowing through holes in the concrete to the lower ponds that will flow into the sea. The skylight introduces natural light through concave mirrors, both to the upper platform and to the interior spaces, thus generating a vision of a zenith oculus. A total of 12 vertical types establish the descending evacuation stairs of the building, as well as the communication between different spaces. Water and sanitation facilities are restricted to wet silos, corresponding to circular public toilets, distributed at different levels. The type of ventilation system renews the air introduced to the air conditioning units from the open base of the silos to its extraction at the top of the building. 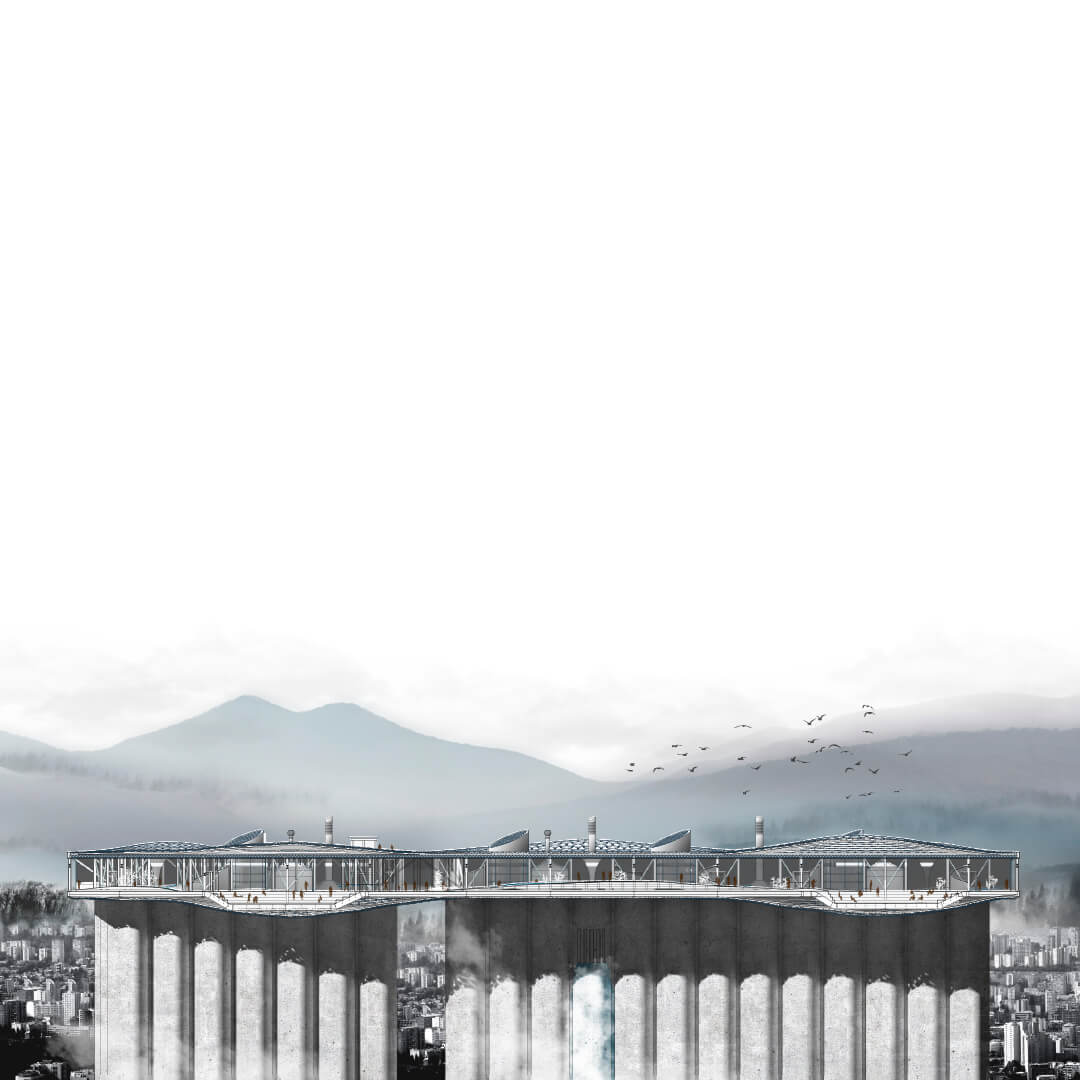 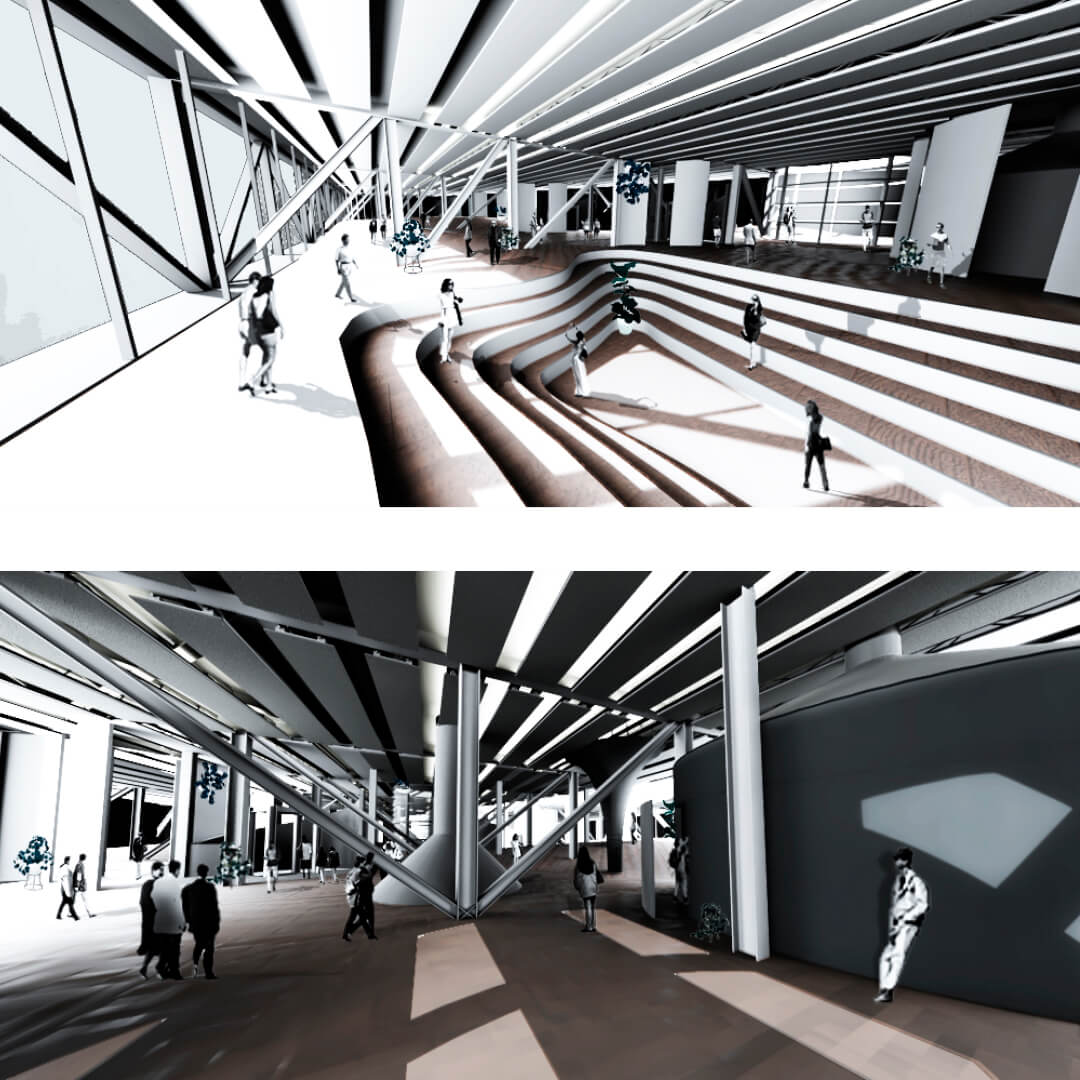 Finally, the roof, with a single access, is understood as a space free of noise, where the projections of the interior can be predicted through the spaces under the roof, intended for the storage of photovoltaic energy. The exile of the silos and their new transmutation is just the beginning, the process of the coastal deindustrialization of Lisbon begins here. I’m not sure what it will be like from now on, I’m just aware that we can finally touch the water.