Hyphae is the formal result of an analysis rooted in the place, Logroño, whose central element is the mushroom.

The conditions of mushroom cultivation make the heart of hyphae underground cellars that take advantage of the thermal inertia of the terrain through the observation of traditional architecture. Inertia dampens sudden changes in temperature, favoring stable hygrothermal conditions suitable for human biology. Although the temperature cannot be altered, the thermal sensation can be altered through the humid conditions. To control them effectively, particular ventilation elements are provided: chimneys. Chimneys are projected arranged between 6 and 12 meters that contribute to generate pressure differences to have a constant indirect ventilation. These elements regulate the temperature of the building through the exchange of currents that use the sun as an absorption element, and, in addition, allow to eliminate substances harmful to the user. Therefore, they are called exchange mechanisms. To promote acclimatization, a material with sufficient density is used to work with its own inertia as the weather varies outside. The thermal circuit is completed with water coils that allow to have a radiant and coolant system for day and night. 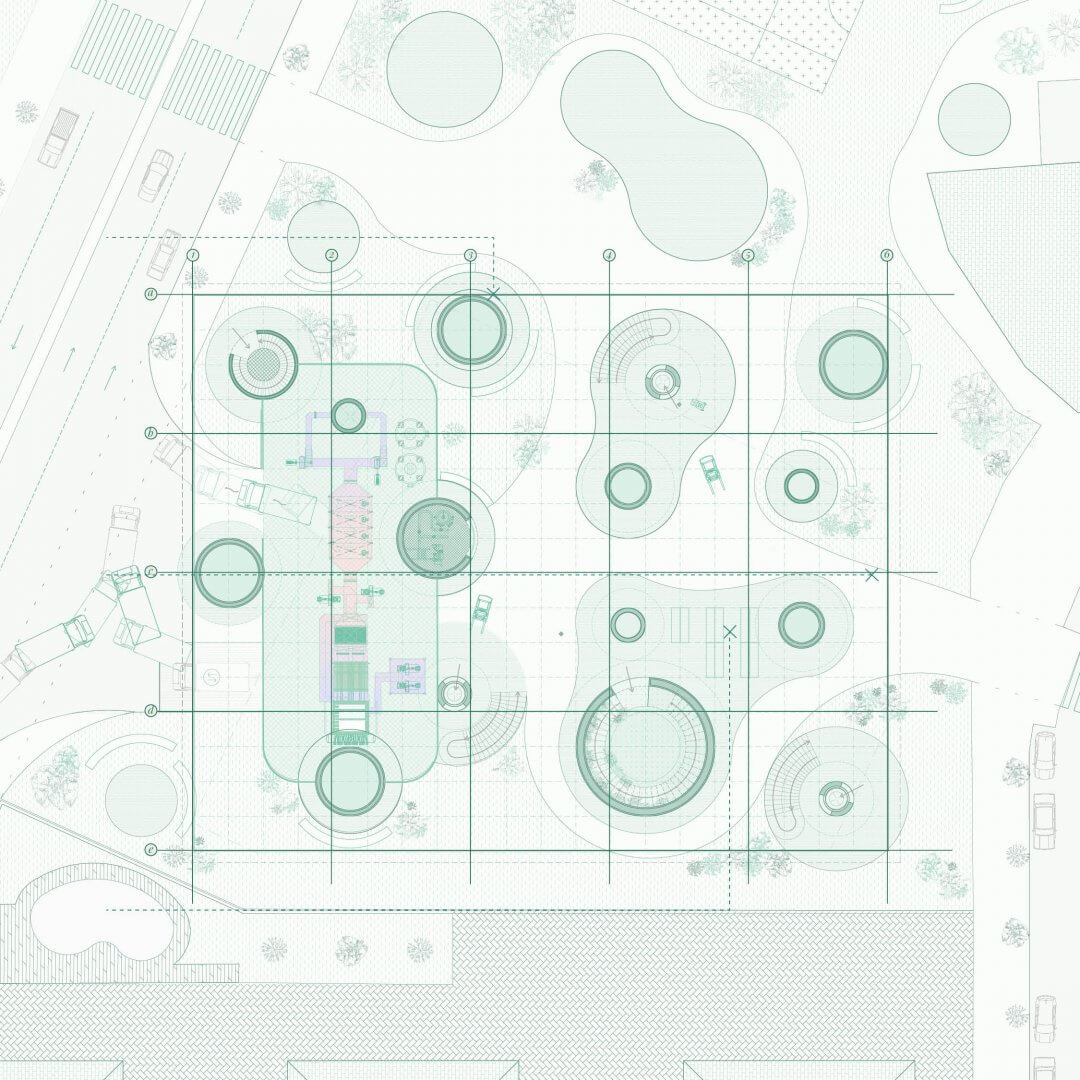 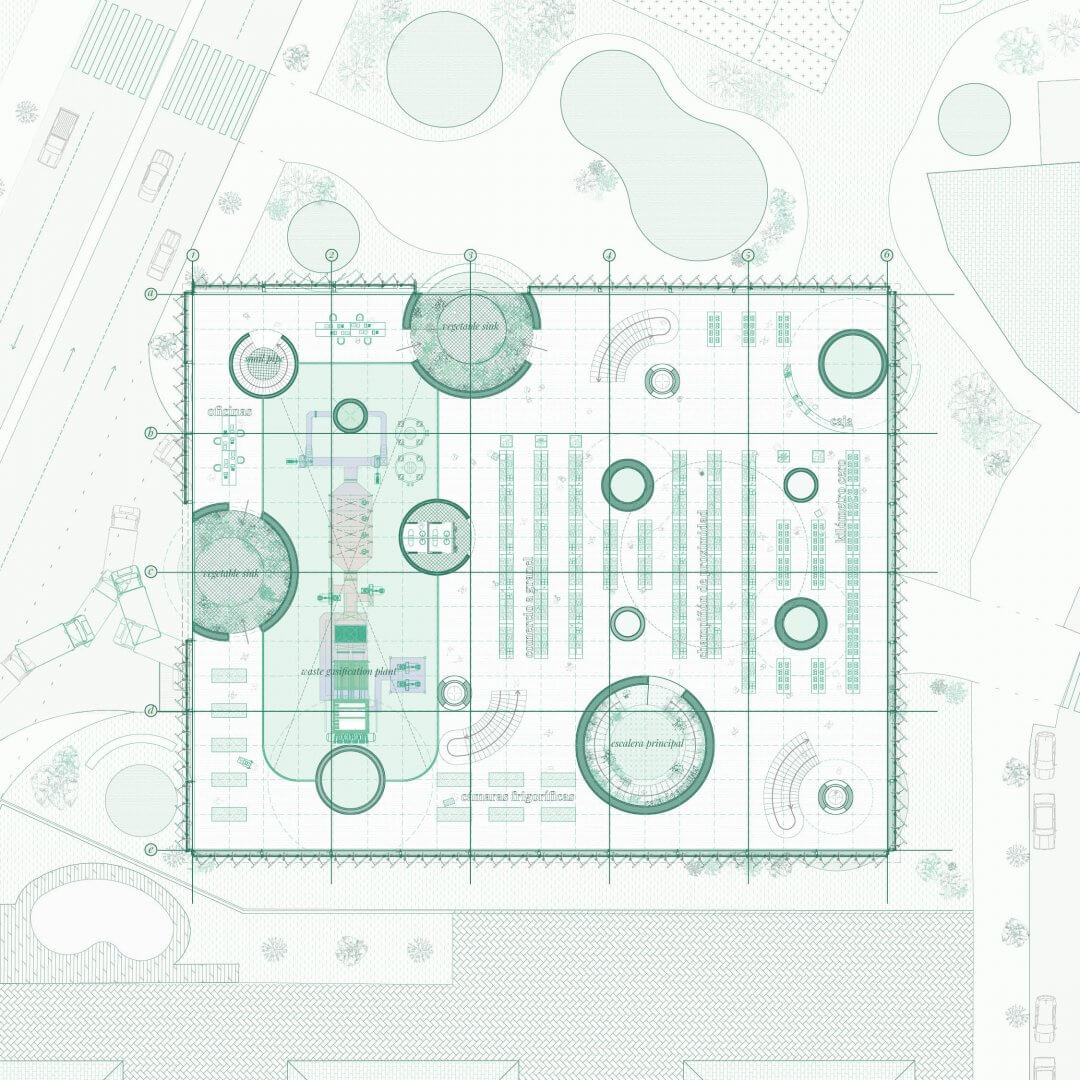 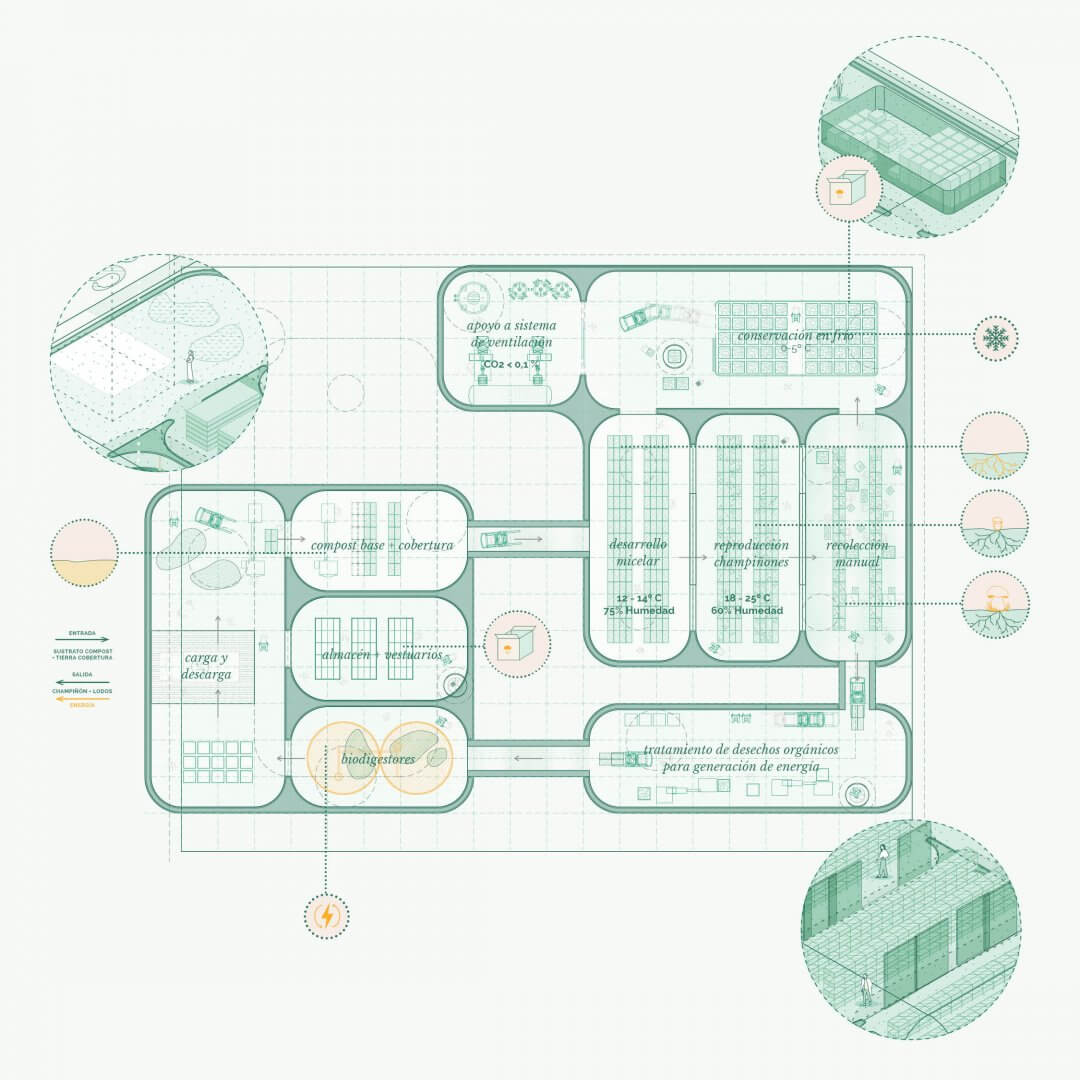 With the different uses that are given to them, they generate a catalog. The most unique chimneys are widened and cut into the façade, house vegetation that absorbs reverberation, provides aromas, regulates carbon dioxide and favors the hygrothermal sensation through evapotranspiration and its geometry. In the same language, chimneys are used for the communications cores or the bathroom. The facilities are integrated into the architecture. There is also a specific type of ventilation, the own of gases harmful to health, those emitted by the combustion of biogas, for which a specific mechanism is available with the classic type of chimney. All these elements generate a compact section that intersperses different programs derived from the cultivation of the mushroom. However, they stand out for being the structure of the building itself. To do this, its execution is carried out in situ in reinforced concrete through climbing formwork that adapts to the geometry to avoid a waste in the construction resources and to be able to recycle and reuse the material later. 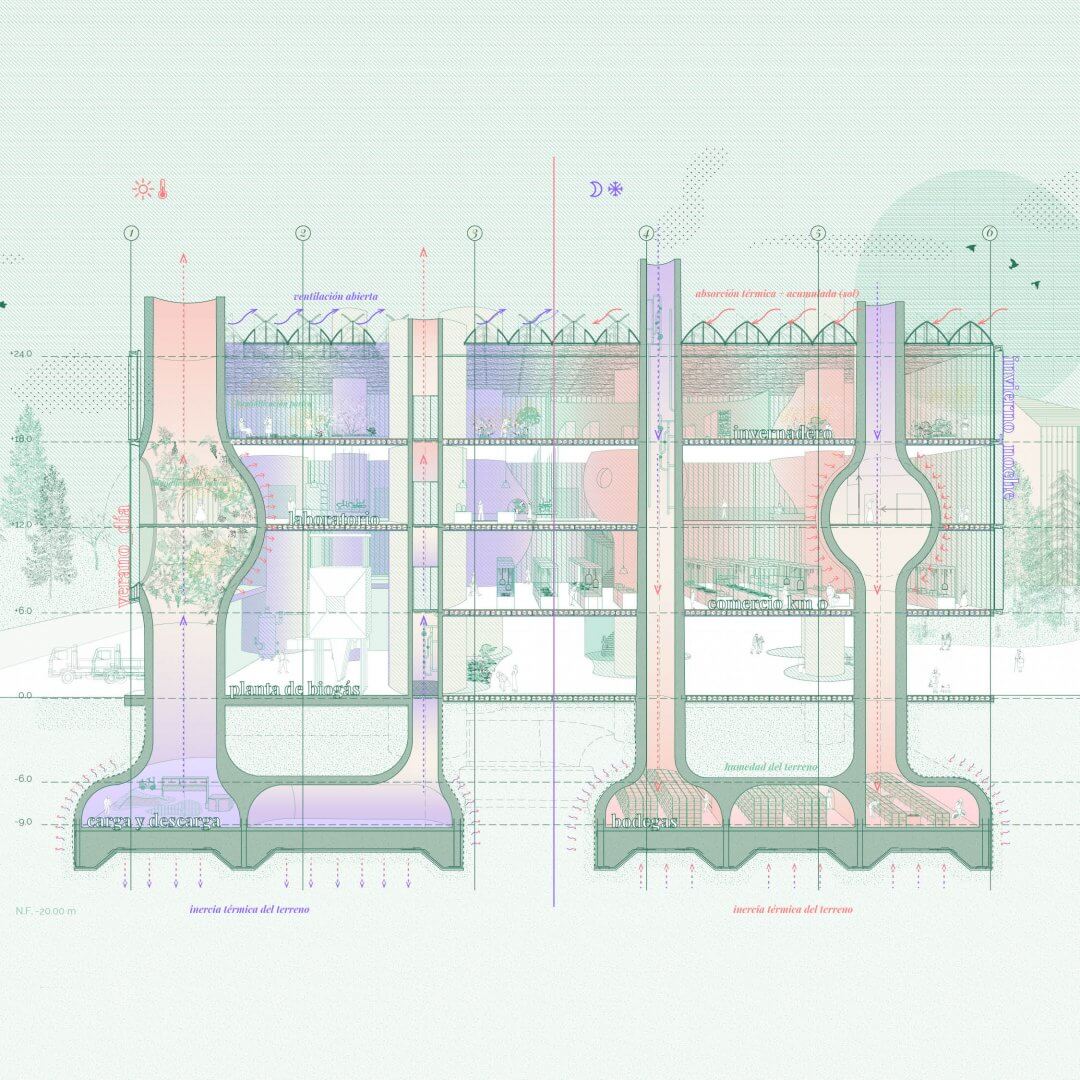 The acclimatization of the project is also influenced by the envelope and orientation. The footprint of the nave on which it is located allows to elaborate an analysis of sunlight with the optimal orientation for the use of sunlight, turning the building slightly on the north-south axes. The façade, double, with semi-hollow polycarbonate slats that are regulated by home automation to avoid direct solar radiation has holes that allow the permeability of the project in coexistence with the public space. The roof of ogival arches is made of polycarbonate on rolled steel creates a greenhouse effect that supports the chimney system opening when the temperature inside rises to favor cross ventilation. The building hides the biogas plant, which gives scale to the entire project. To disguise its disproportion, impost lines are created every 6 m, simulating a three-storey building to adapt to a closer scale. 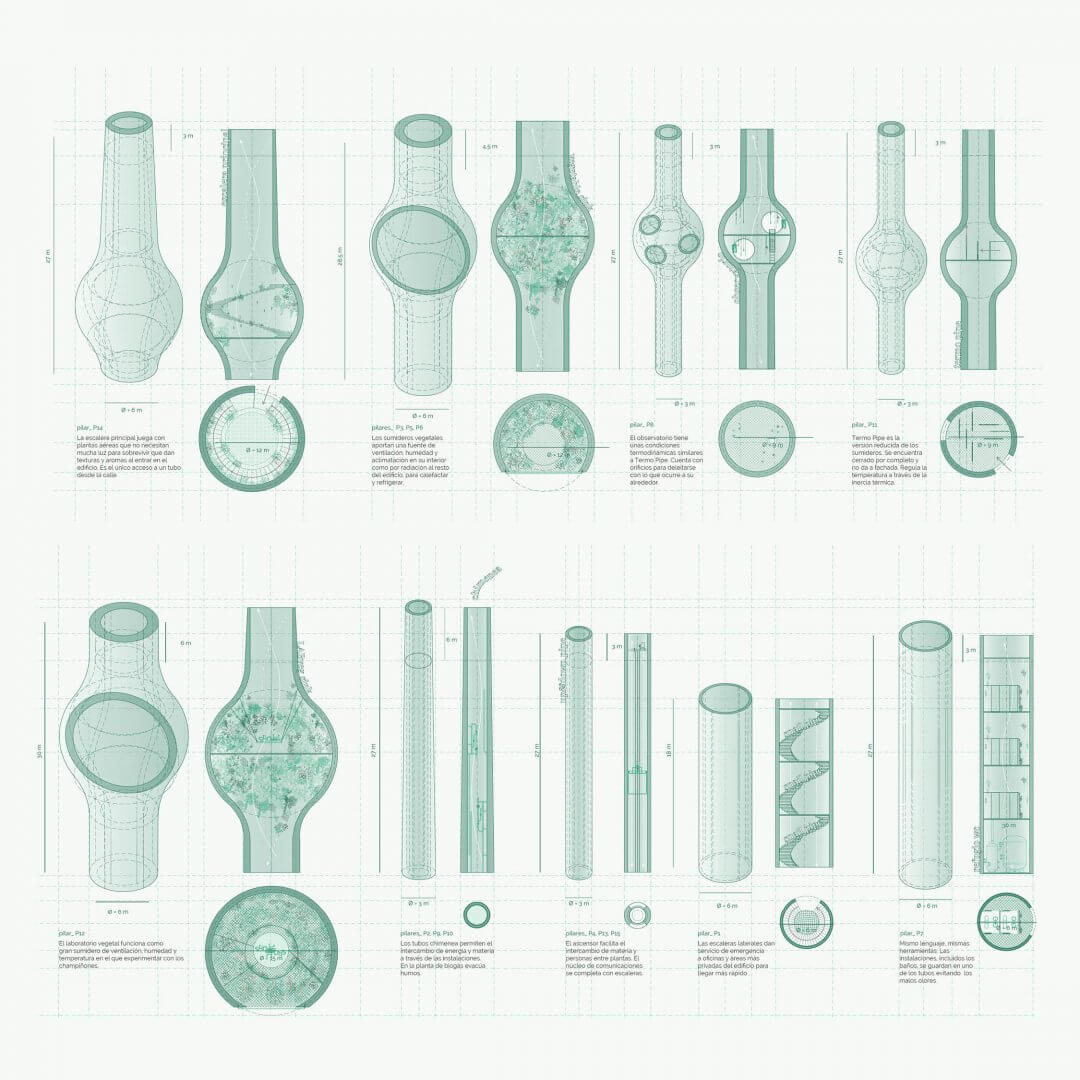 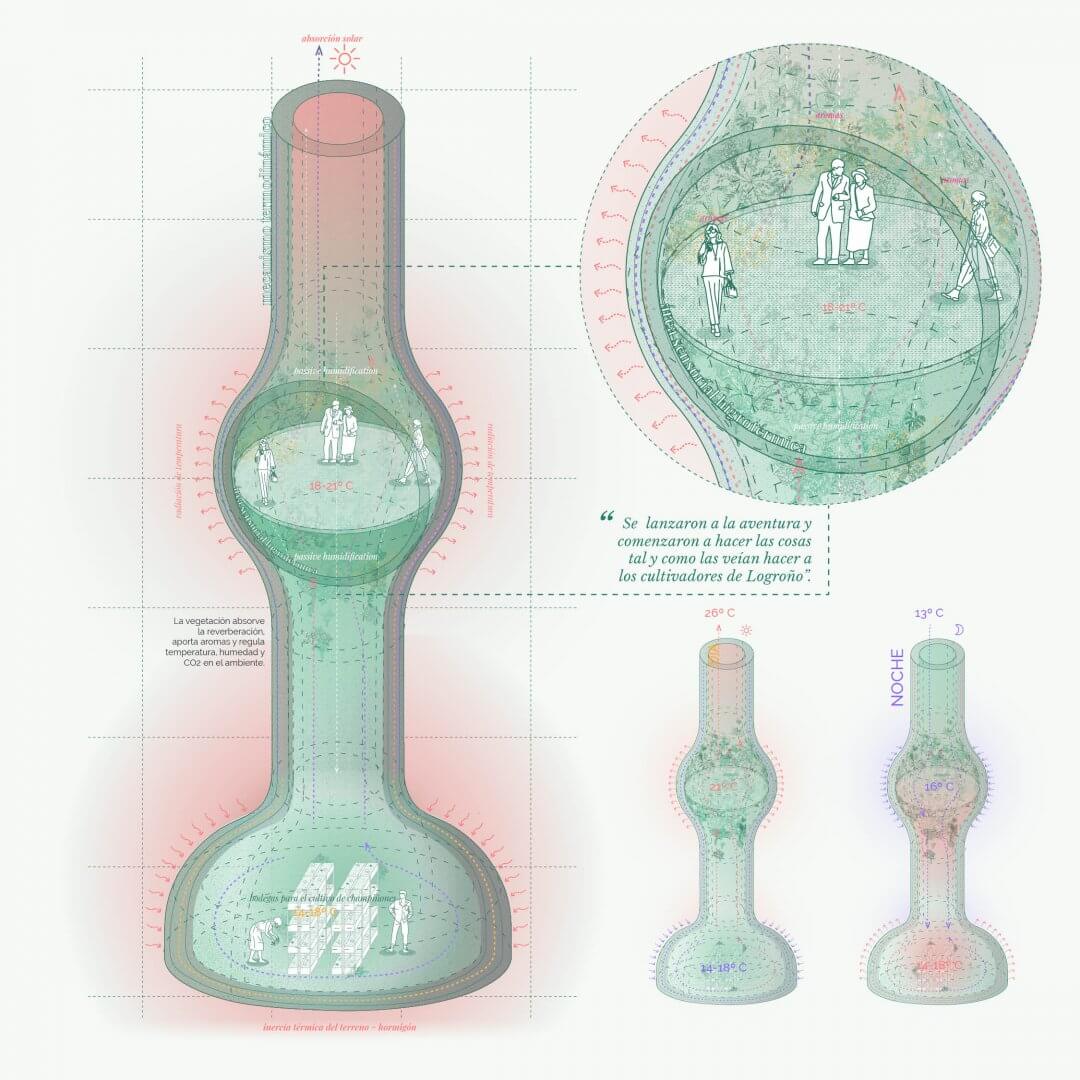 Inside, the wineries respond to the Dutch process in which each stage of mushroom growth has specific needs to produce more efficient crops. Once collected, it is divided into two parts, the product that is traded and the waste that is transformed into biogas and allows energy feeding, not only of the winery, but of its surroundings. The access floor houses living areas that allow to understand the area as a public space in which the biogas plant coexists that acts as a barrier against the prevailing winds in winter. The re-tradition of mushroom cultivation generates an agri-food production. This product is grown and sold in the same building through the first floor, a local trade that avoids unnecessary transport and brings the food trade closer to Valdegastea. The plant immediately above houses the laboratory, mushroom research areas as support to the Technology Center and access to exchange mechanisms. The top floor works as a solar fireplace and houses flowering parties creating a space of climatic, acoustic and sensory comfort. By turning this plant into a greenhouse, the vegetation provides moisture, helps the exchange of oxygen and carbon dioxide and is an acoustic absorber as a result of the reverberation of the materials used in the roof. 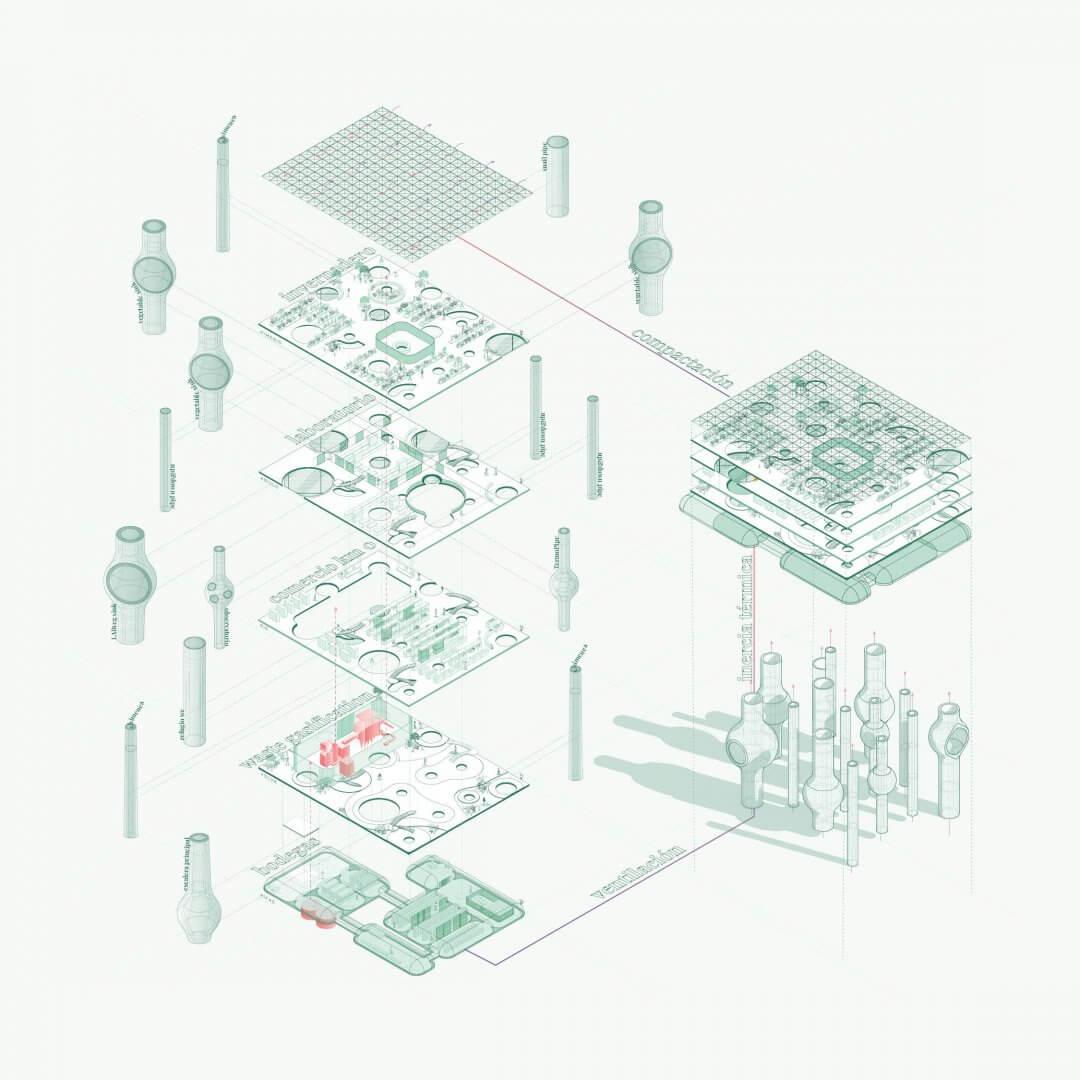 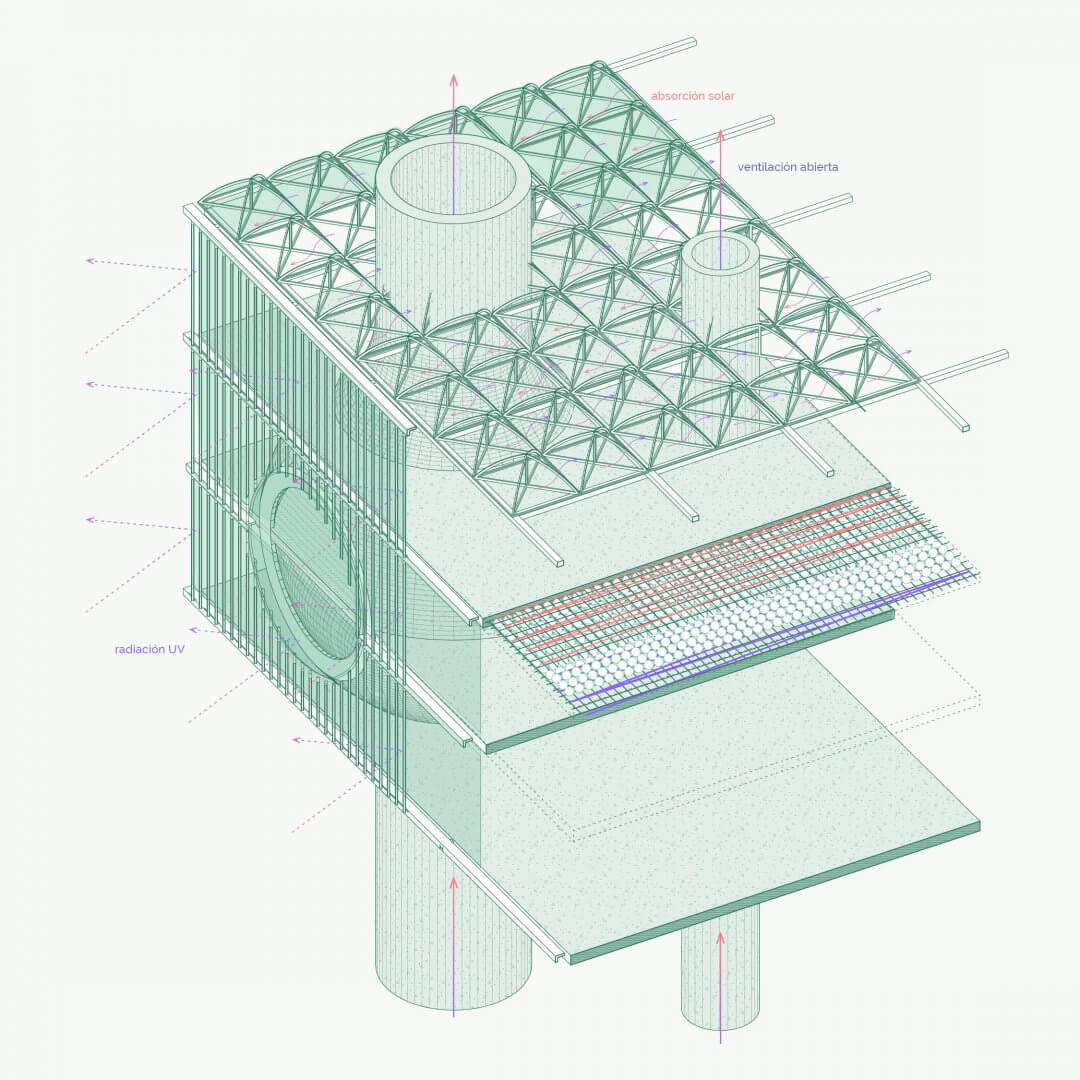 Hyphae thus becomes a project in which mushroom, tradition, technology and energy coexist.