The existing school with its strong presence with a massive white rock base and an attic carefully designed in “Hauterive” stone is part of the heritage and history of Neuchâtel. One of the main challenges is to showcase it and increase its visibility.

Context
In the rich urban context of the city of Neuchâtel, on a topography shaped by the old vineyards, the “Collège des Parcs” was built in 1914. This emblematic site of the city is part of the ISOS inventory with the objective of safeguarding “A”, requiring an increased and precise look in order to tackle the issues that constitute the development of this project.

Minerality
The site, although presenting a beautiful alignment of trees at the level of the lower playground, consists exclusively of mineral and impermeable coating. It would be wise to reverse this situation by giving importance to generous green spaces allowing the project to be part of a sustainable approach. 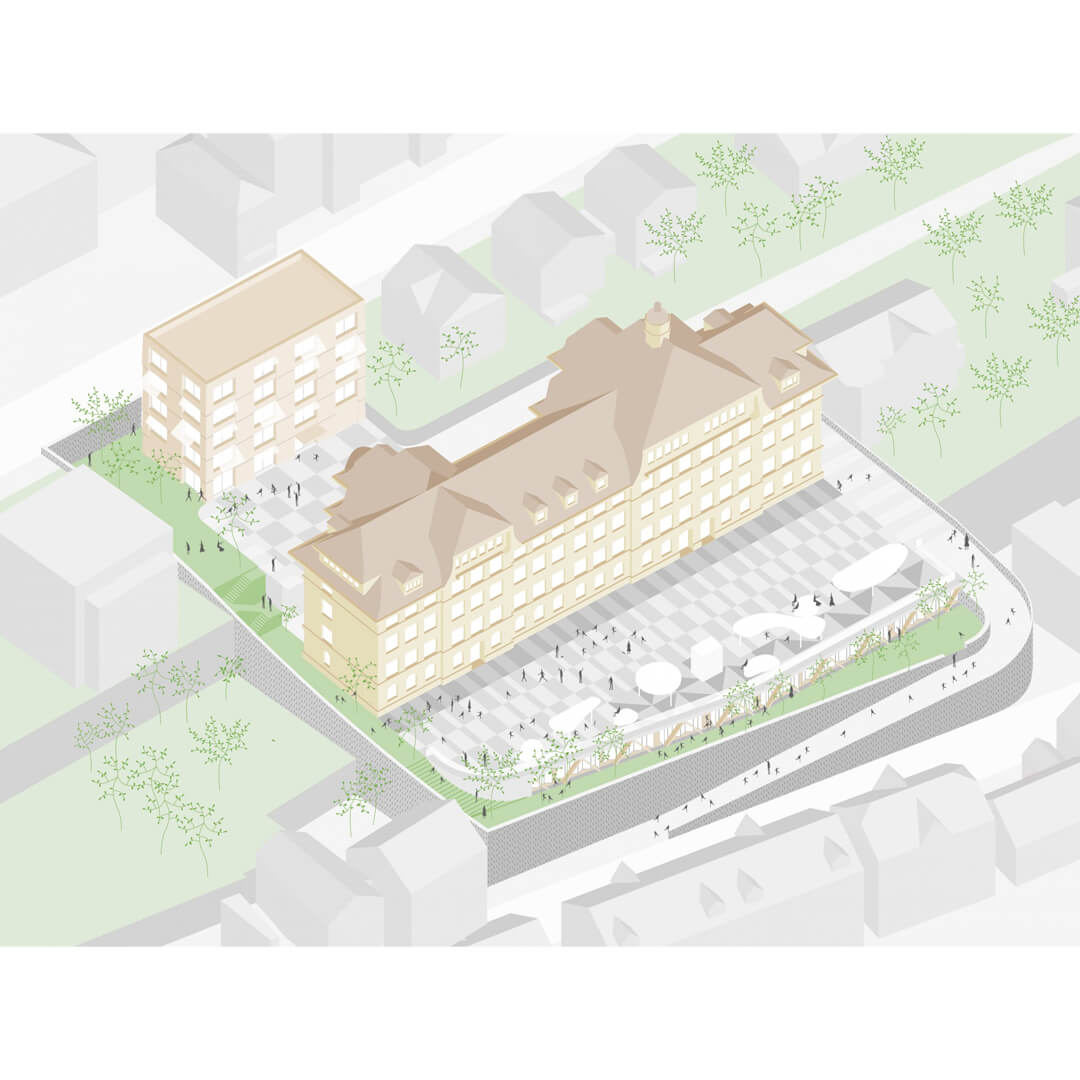 Public space
The “Collège des Parcs” site, beyond being a place dedicated to children and learning, is a real public place, directly connecting the “rue de la Côte” with the “rue des Parcs”. The inhabitants invest this space, appreciated as a place of relaxation. It also lends itself well to the organization of events.

Dug volume
By reversing the ramp system, it is possible to make a hollow in the volume of the base to establish the garden. This device considerably increases the visibility of the south facade of the existing building from the rue des parcs. 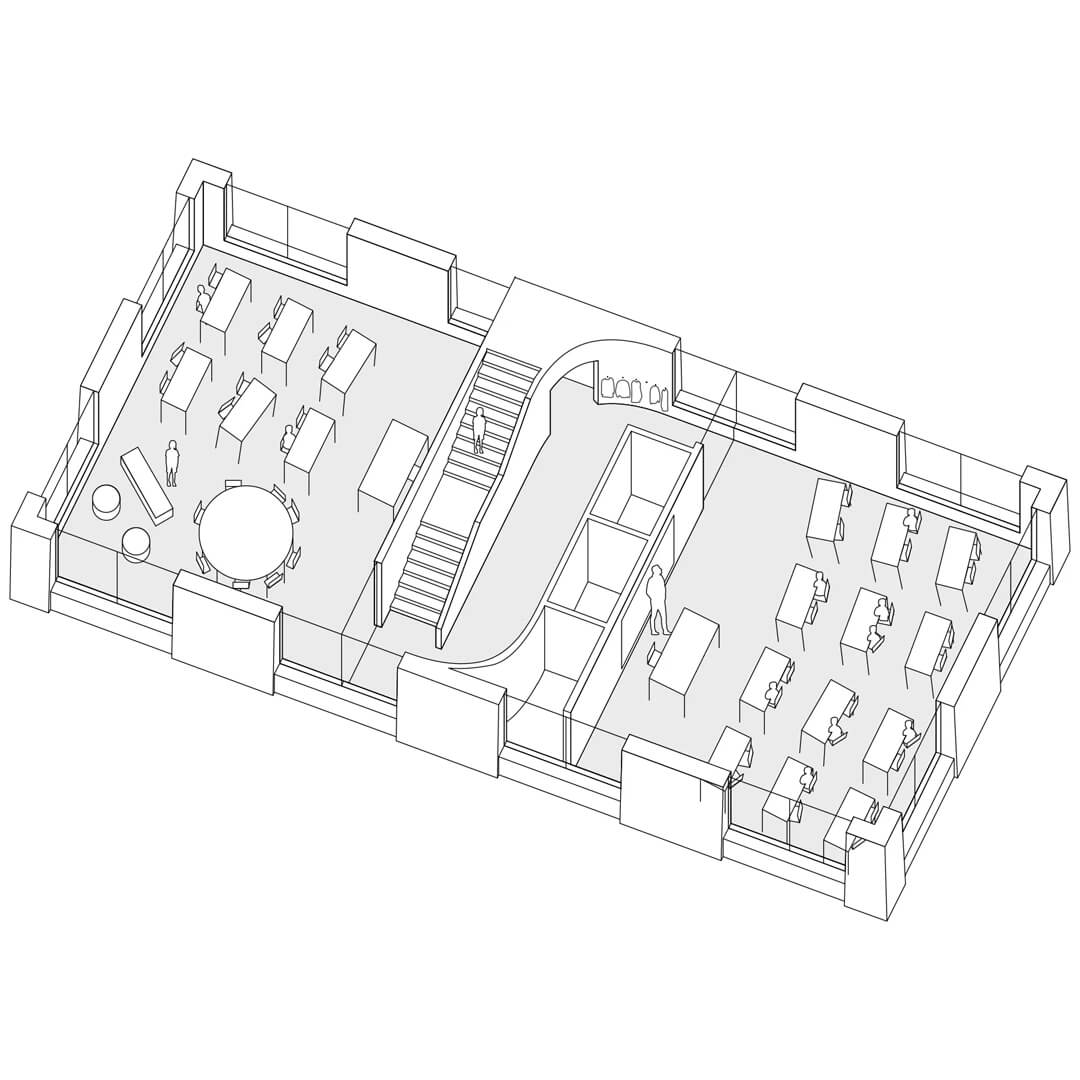 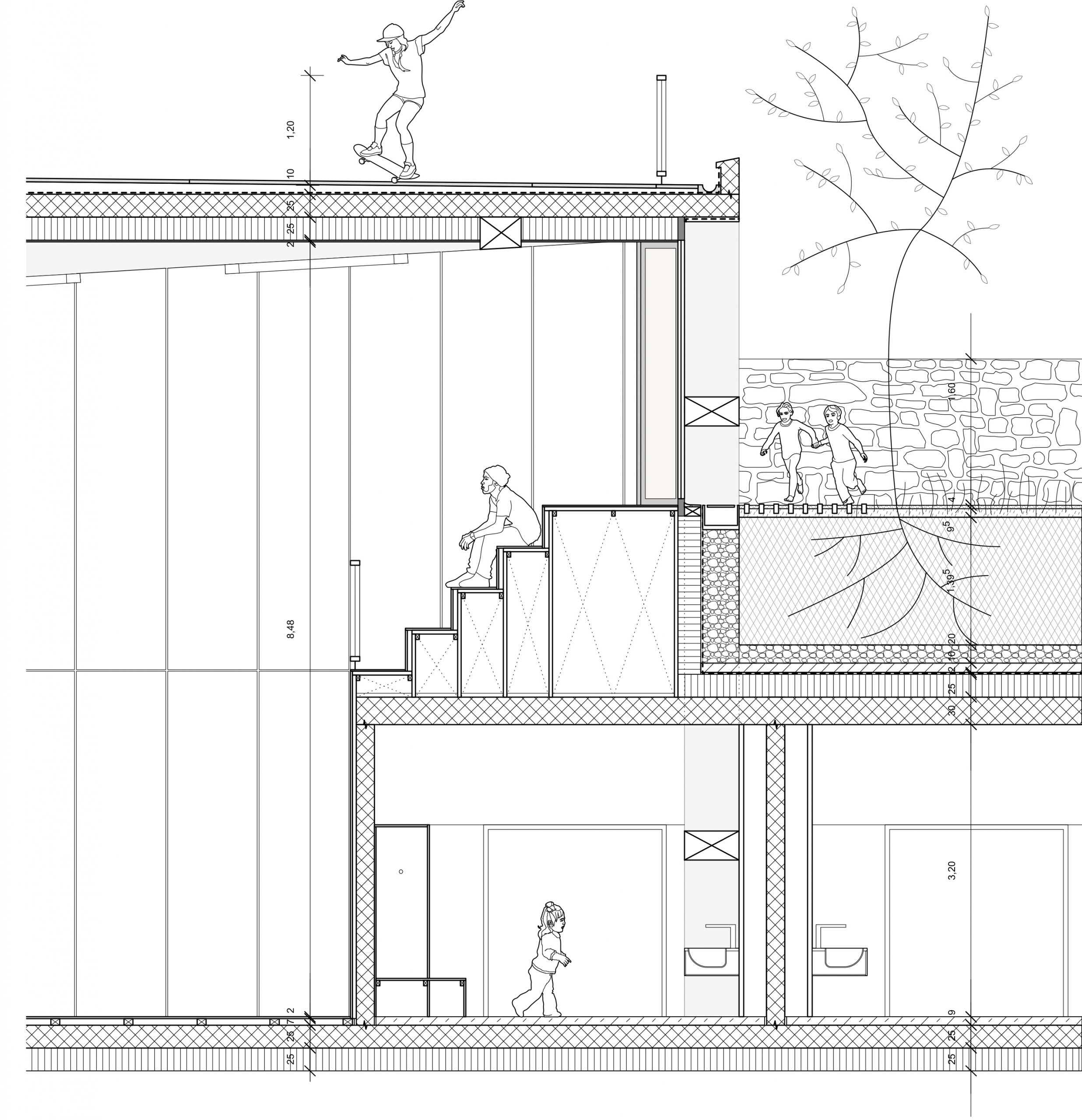 Generous courses
The siting and floor space of the school extension as well as the outgrowths in the south courtyard are kept to a minimum in order to ensure the public character of two generous mineral spaces. The project offers covered bicycle shelters and light urban furniture making it possible to set up events

Planted walk
The promenade planted with trees in the ground, is a smooth and continuous transition in the topography. It rests on a stone wall along its entire length to the west and north, and is one of the major assets of the project.

Garden
The whole favors essences of fruit trees and aromatic plants with the establishment of a vegetable garden maintained in collaboration with the children of the school. The ground surface allows a significant permeability of the grounds with a surface covered with grass and elements in grassed concrete slab allowing a serene crossing. 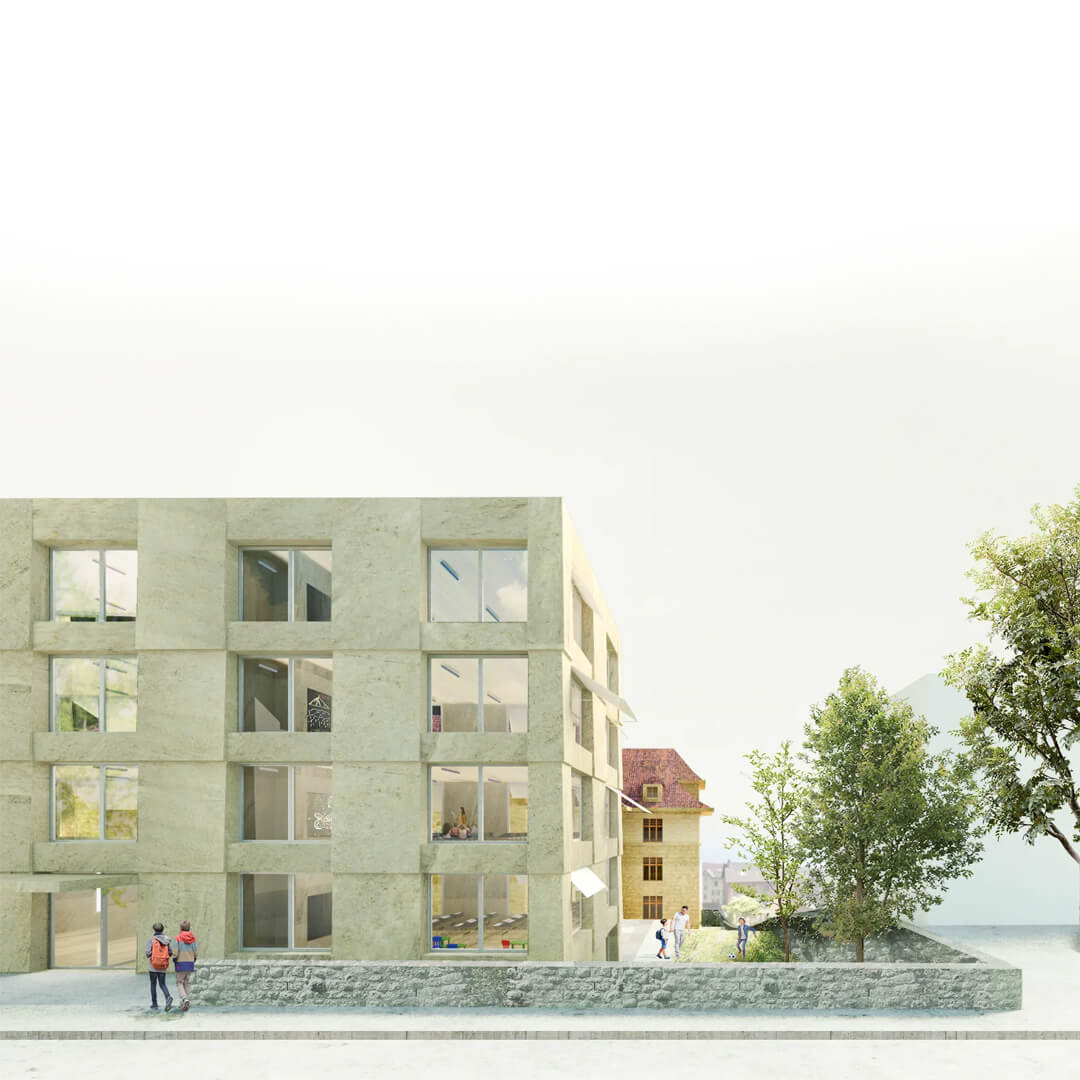 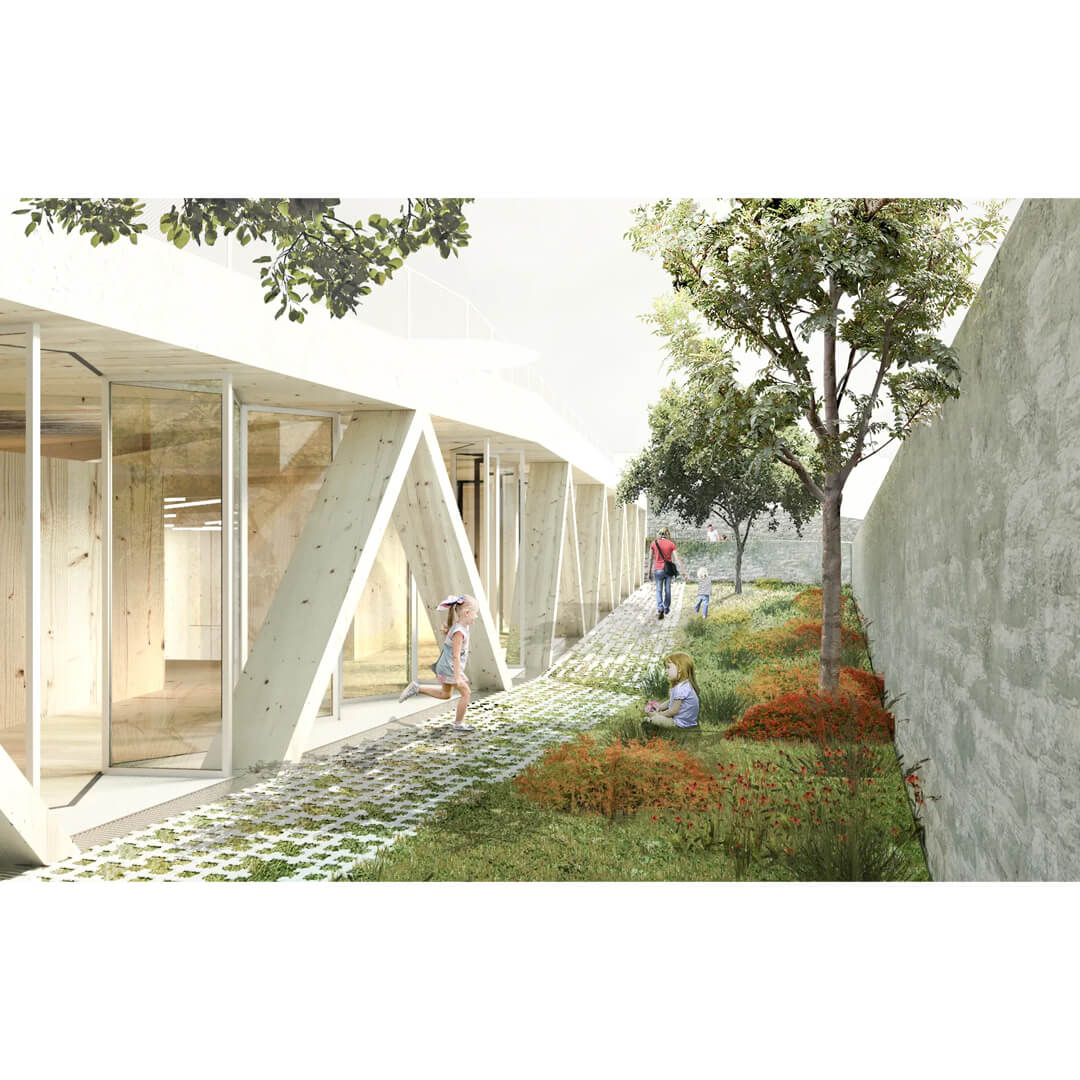 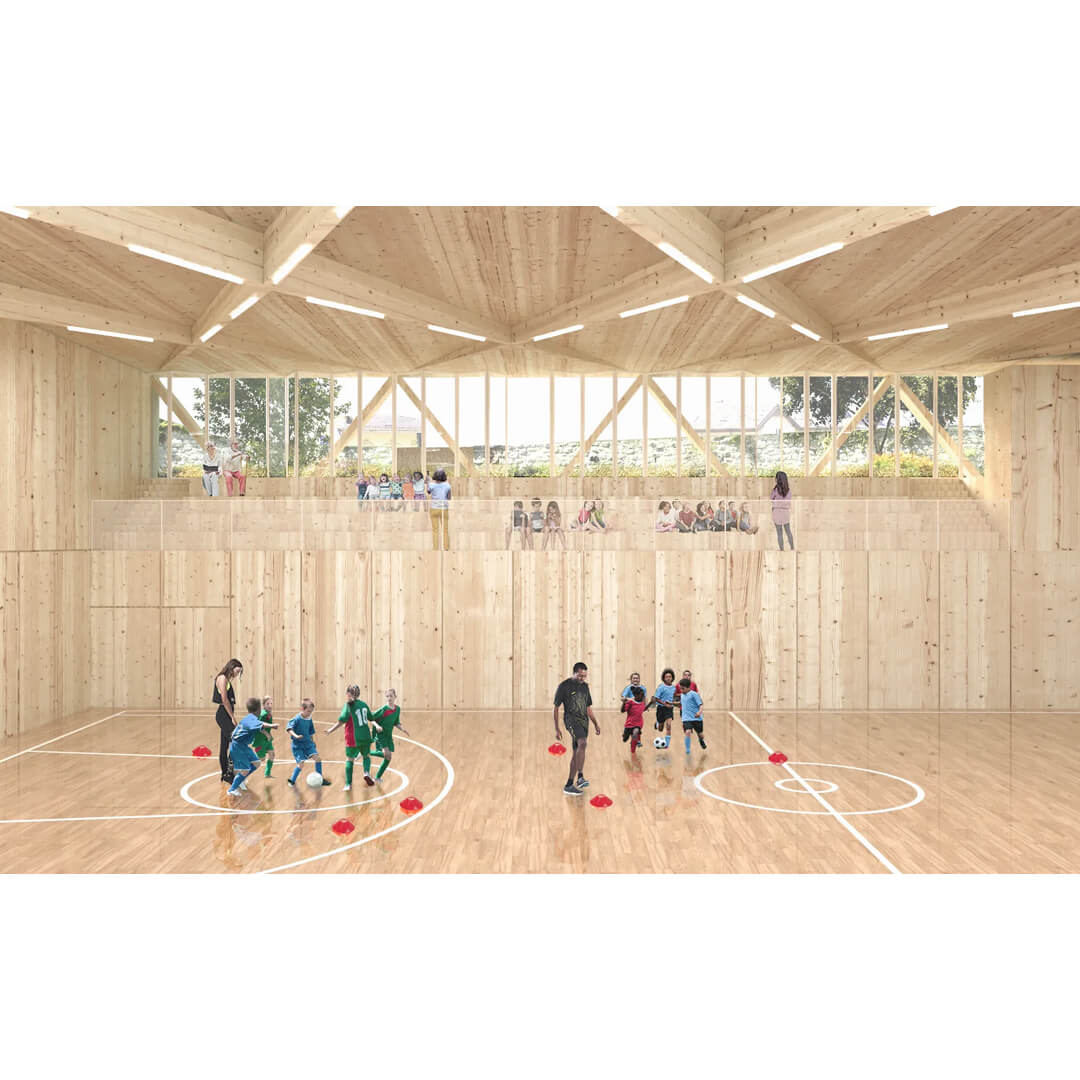 In-between
In the South, the relationship to the retaining wall can now be understood by both sides. By discreetly allowing the front of the sports halls to be revealed, the presence of an underground space is suggested from the rue des parcs. This arrangement creates a generous space between the retaining wall and the largely glazed facade of the sports halls. This garden is protected from the cold winter wind as well as the hot summer months enjoying the freshness of the plant.