The task: Conception of an urban landmark. The Mannheim turbine plant in southwest Germany is a place with a lively industrial history. 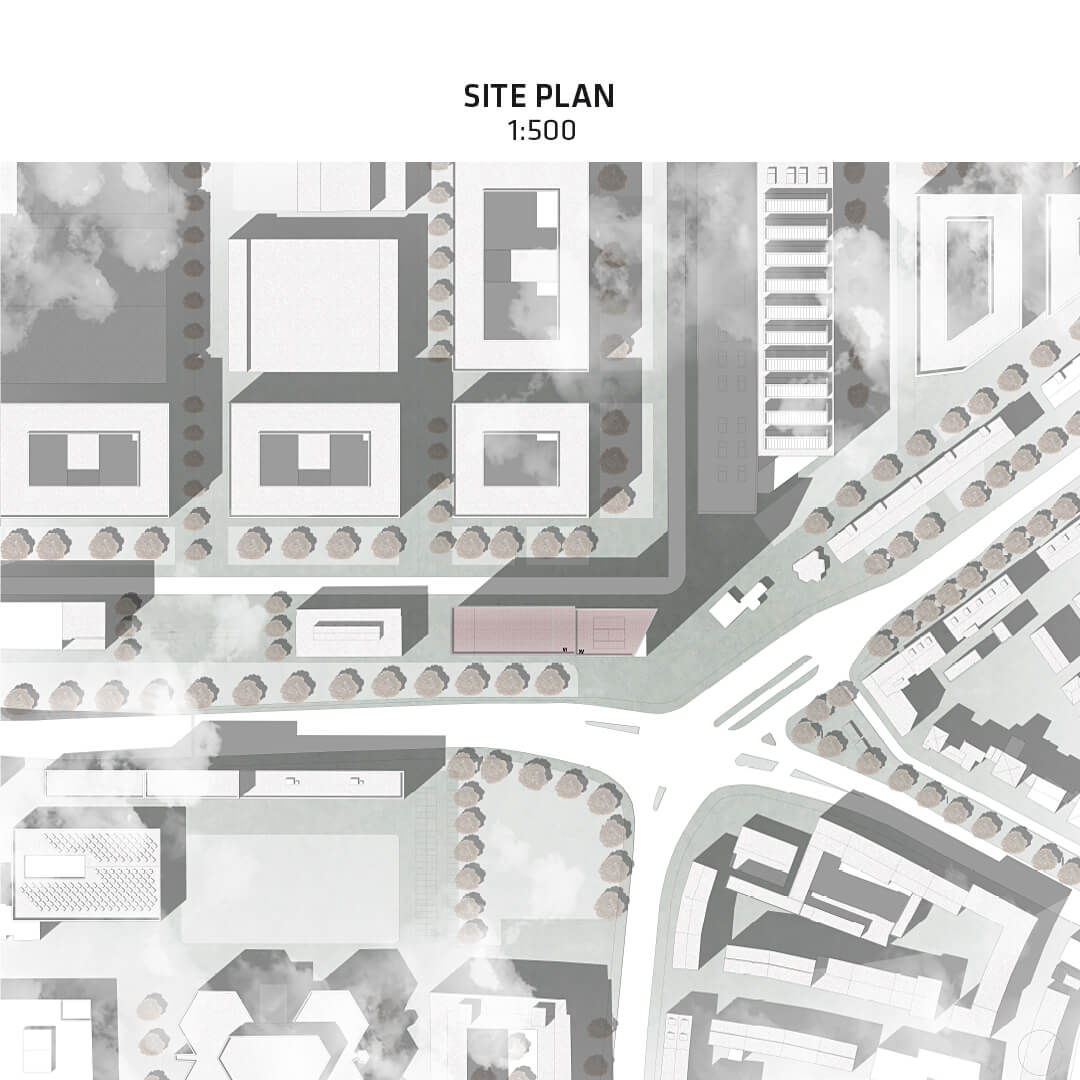 Production halls stand next to solid brick buildings from the Wilhelminian era, which are to be renovated, modernized and supplemented by new buildings in the coming years. The international office AS+P Albert Speer+Partner developed the urban planning framework for the commercial quarter. A high-rise is part of the new development of the turbine plant. Due to its location it functions as an urban landmark is relevant to the perception of the area and its improvement. 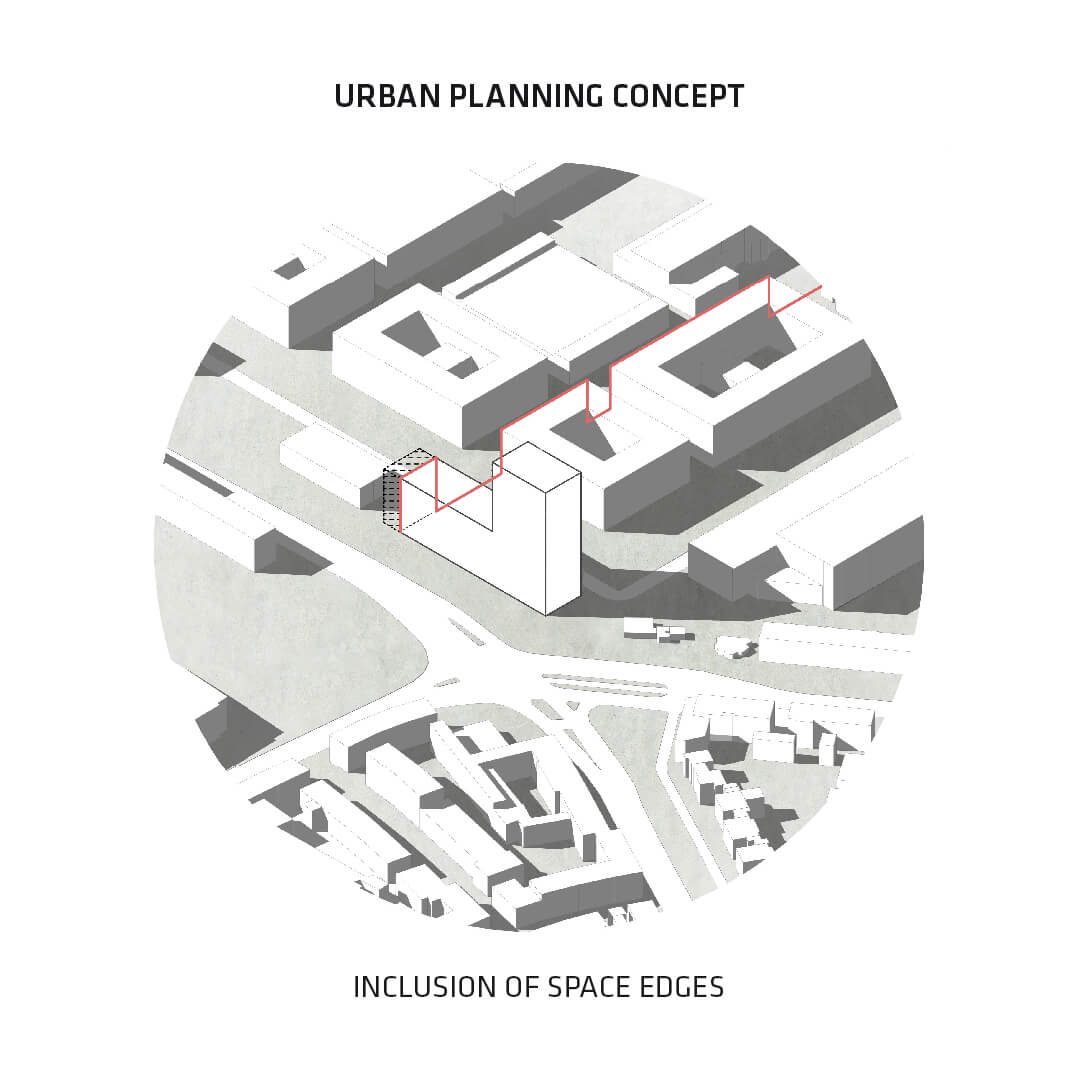 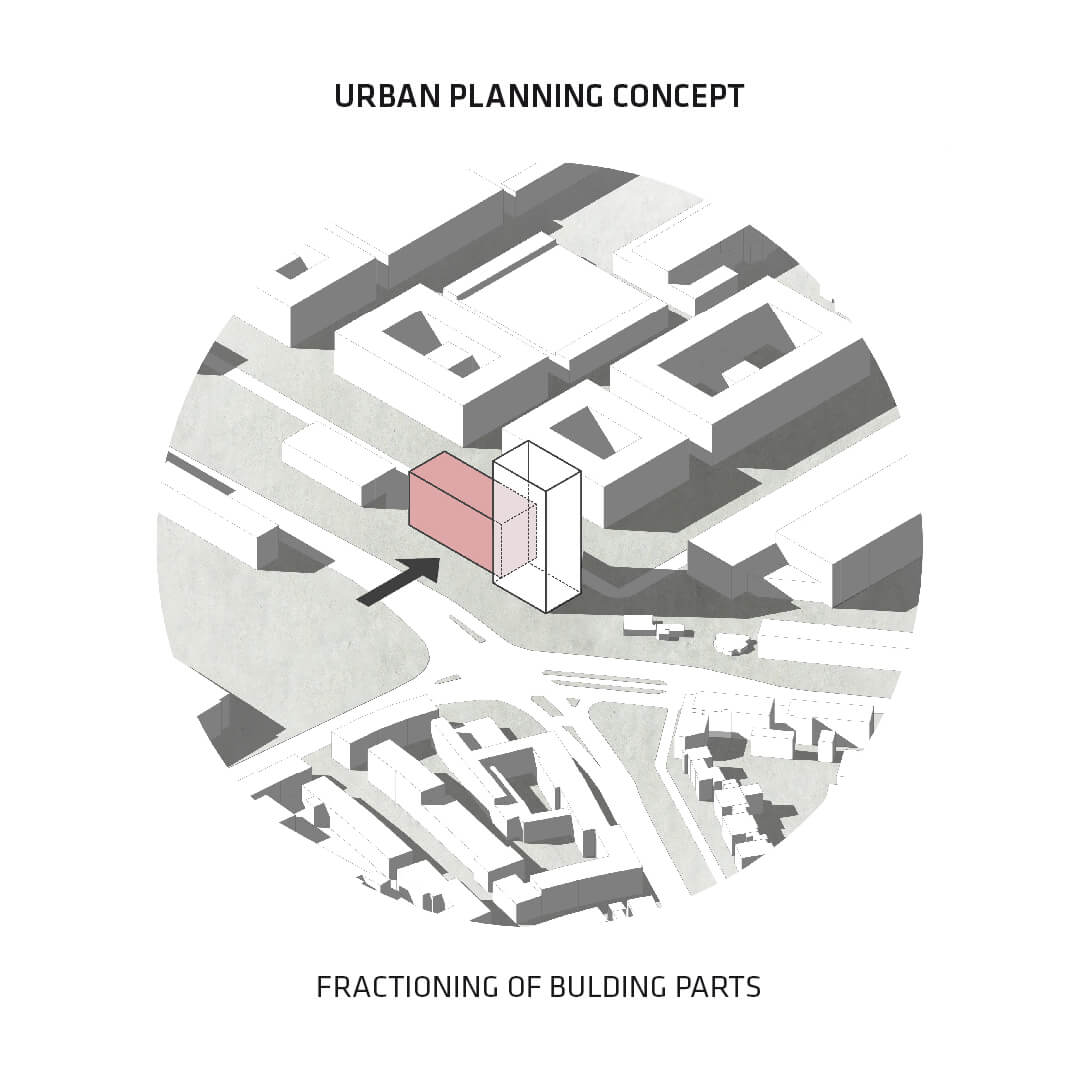 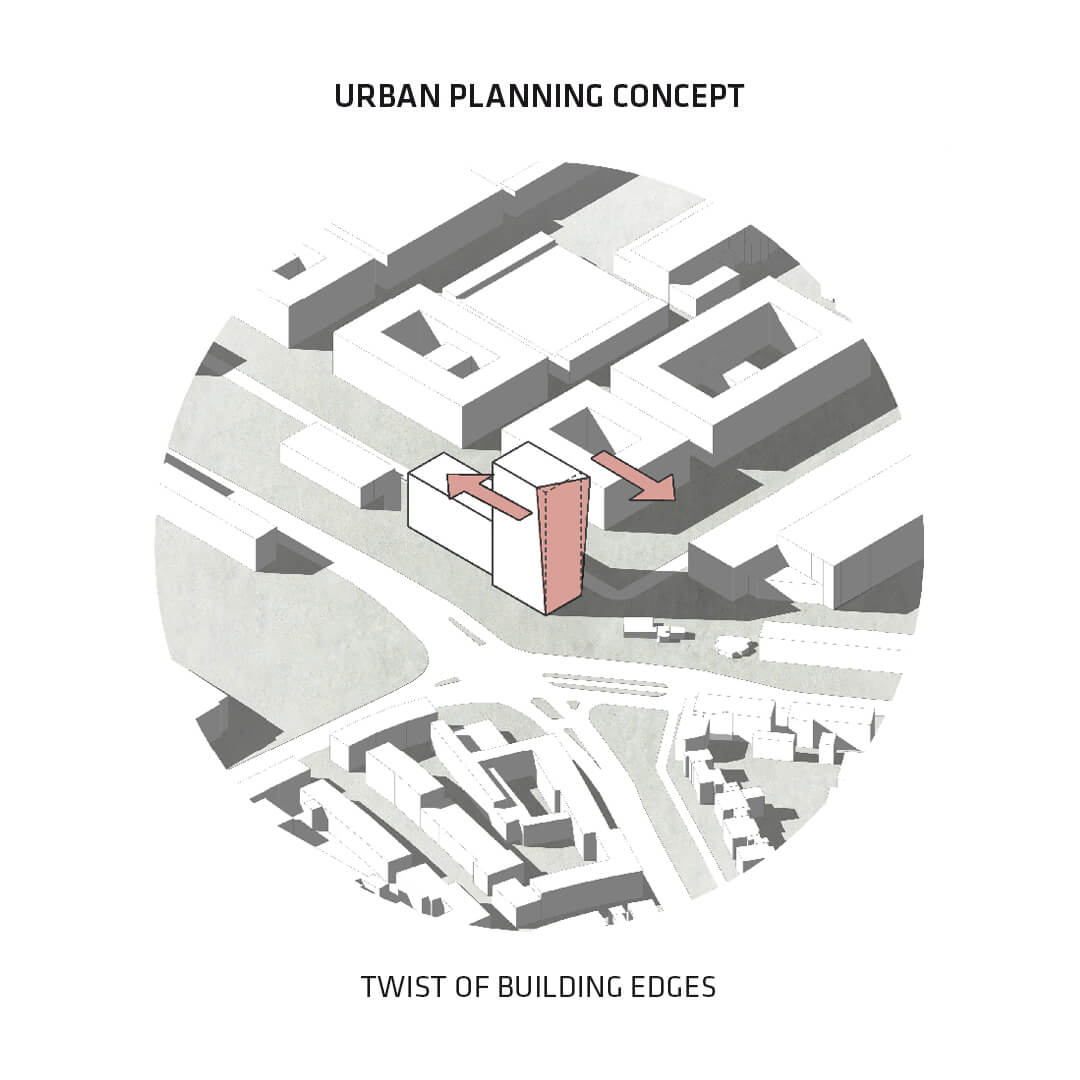 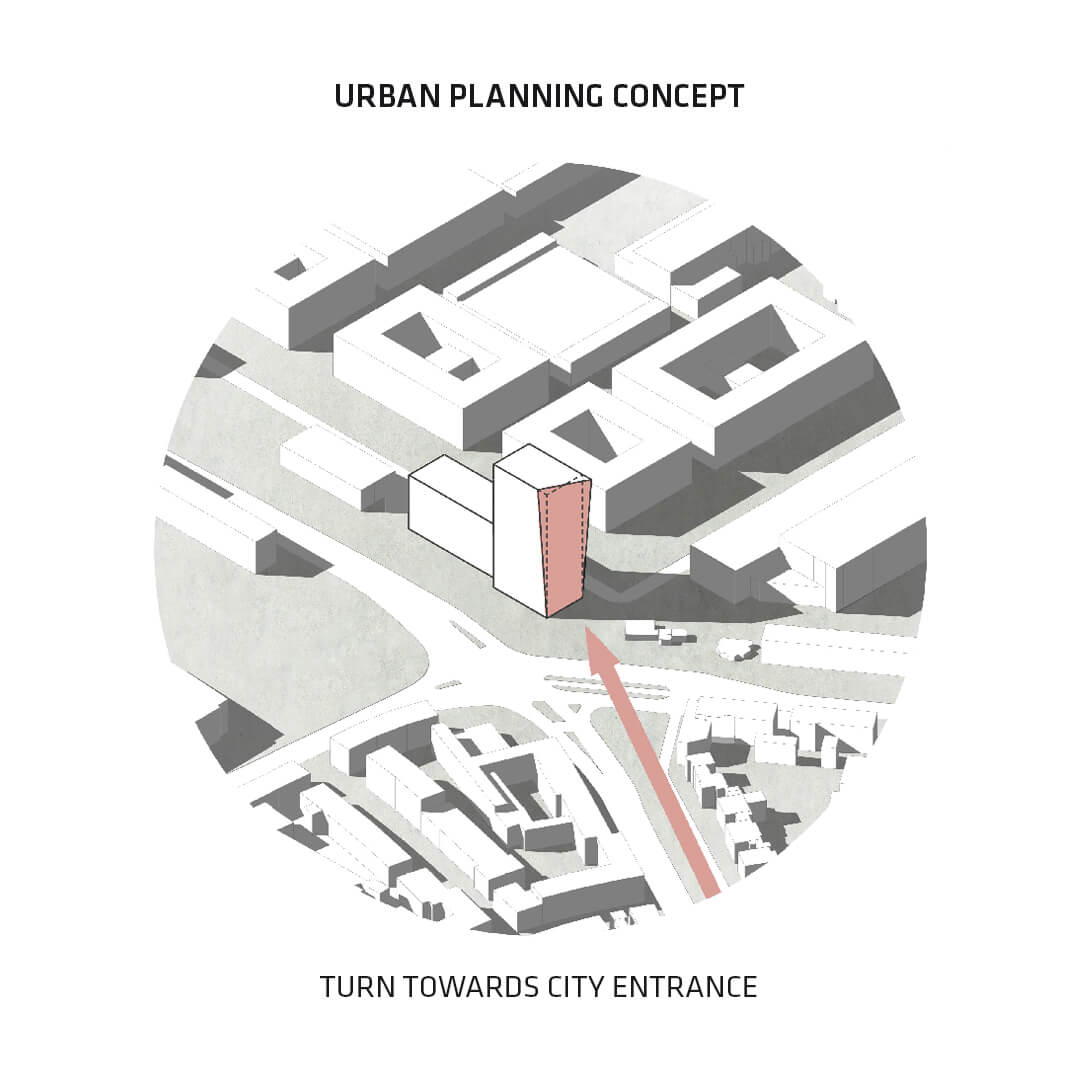 New building: An urban dominant and representative city entrance.
As part of a restricted building construction competition, Fischer Architects designed a building consisting of a tower and building rows as a landmark and representative city entrance to the district. The jury awarded the office’s contribution the second prize. Fischer Architects designed a tower with a striking appearance. Its defining design feature is the twisting of the façade. An urban gesture that underlines the focus on the urban environment.
A clear facade structure supports and reinforces this gesture. Due to the differentiated design of the building structure and the indentation of the transom into the quarter, the tower is even more clearly presented as a landmark in the urban space. Another design approach was to take on the original industrial character of the area and at the same time update the design and so clearly see the difference between the original and updated design ideas. The use of demolition bricks for the facade is representative of this approach. 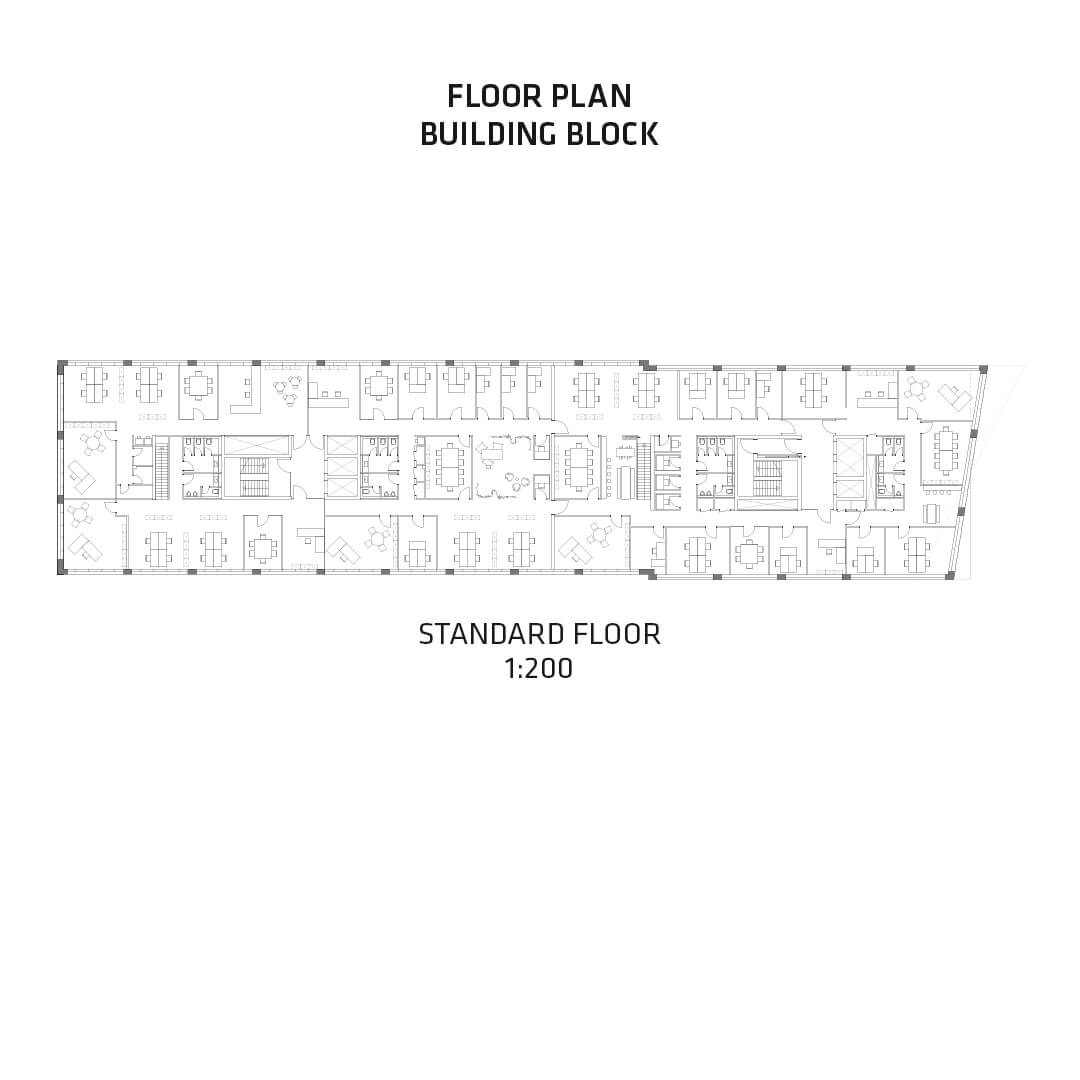 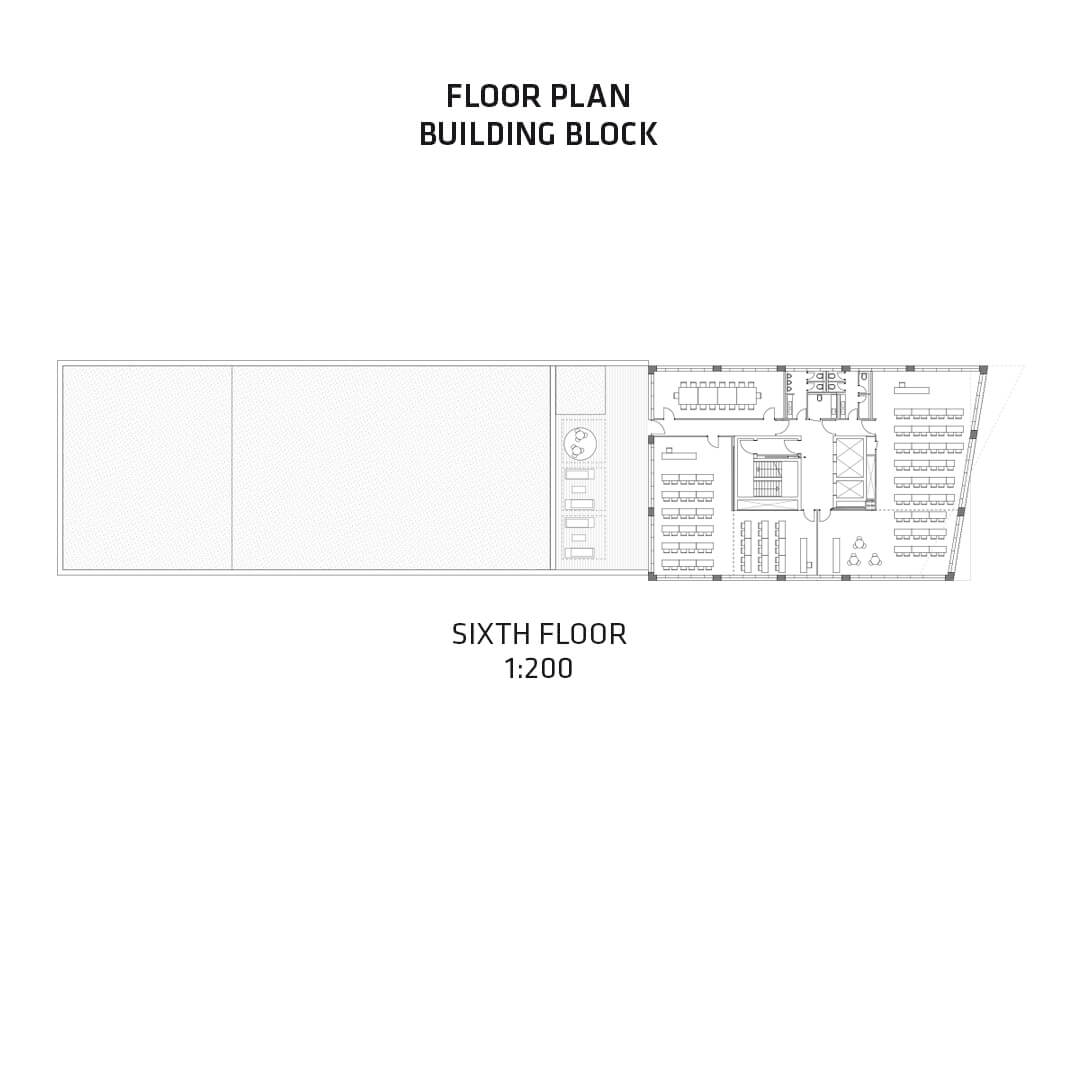 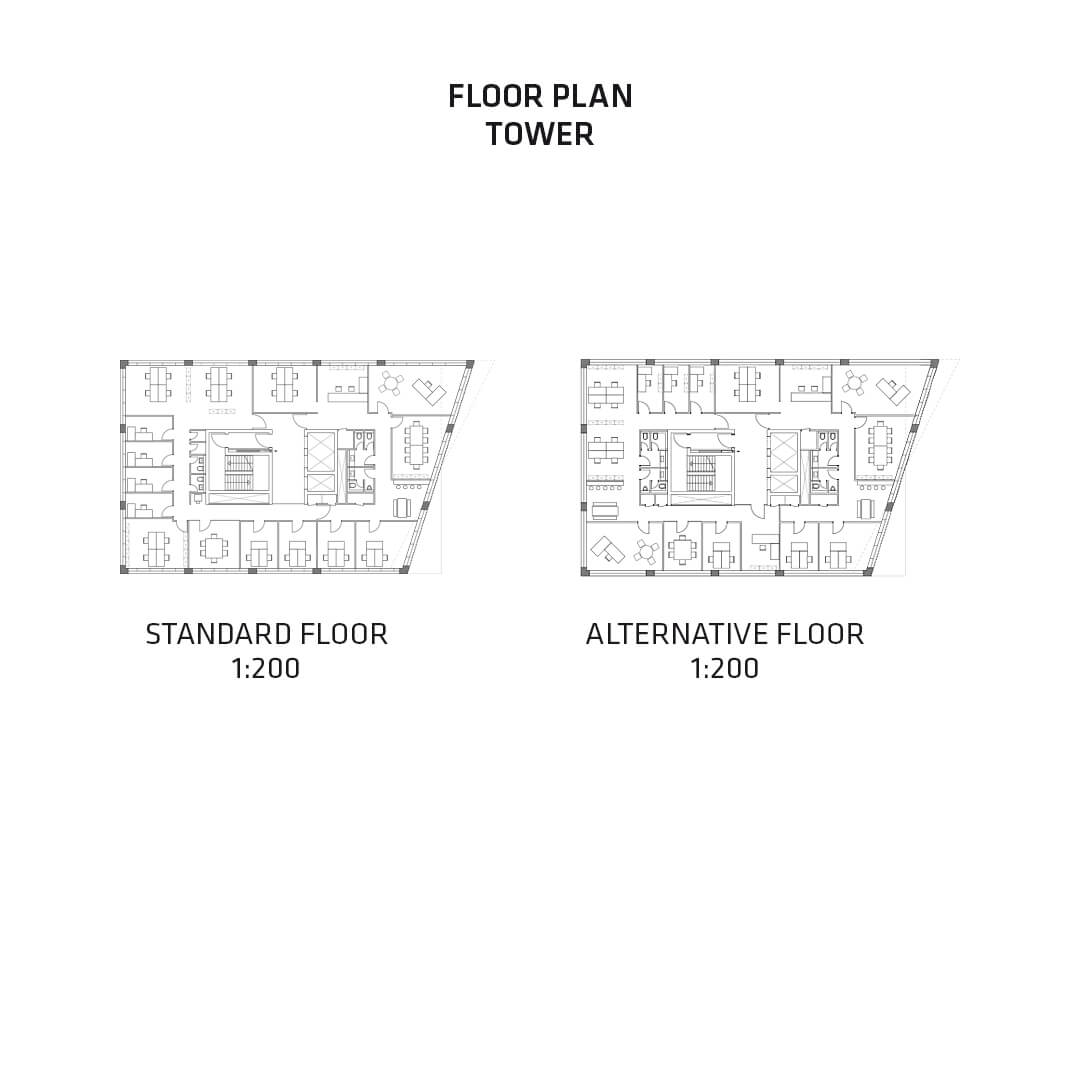 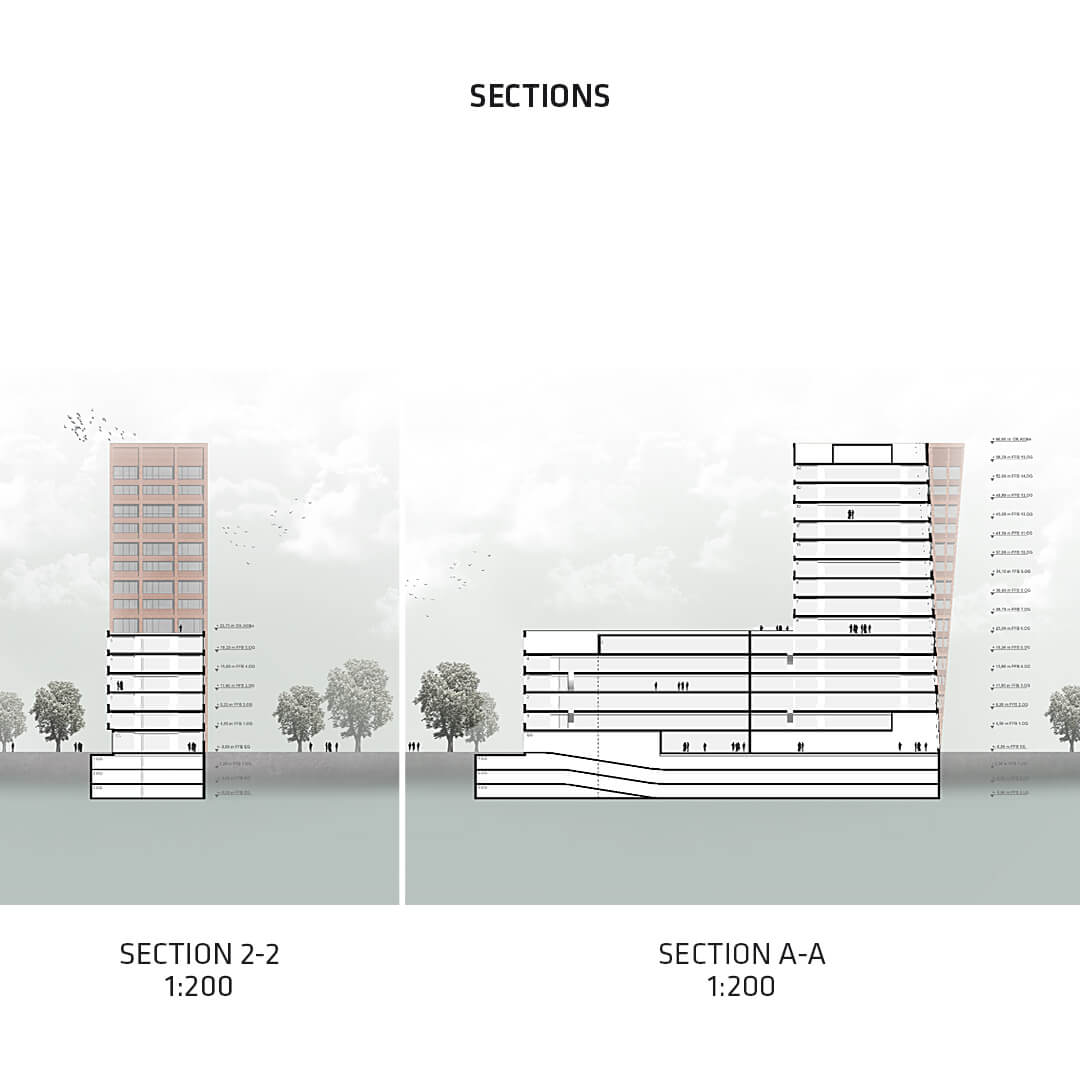 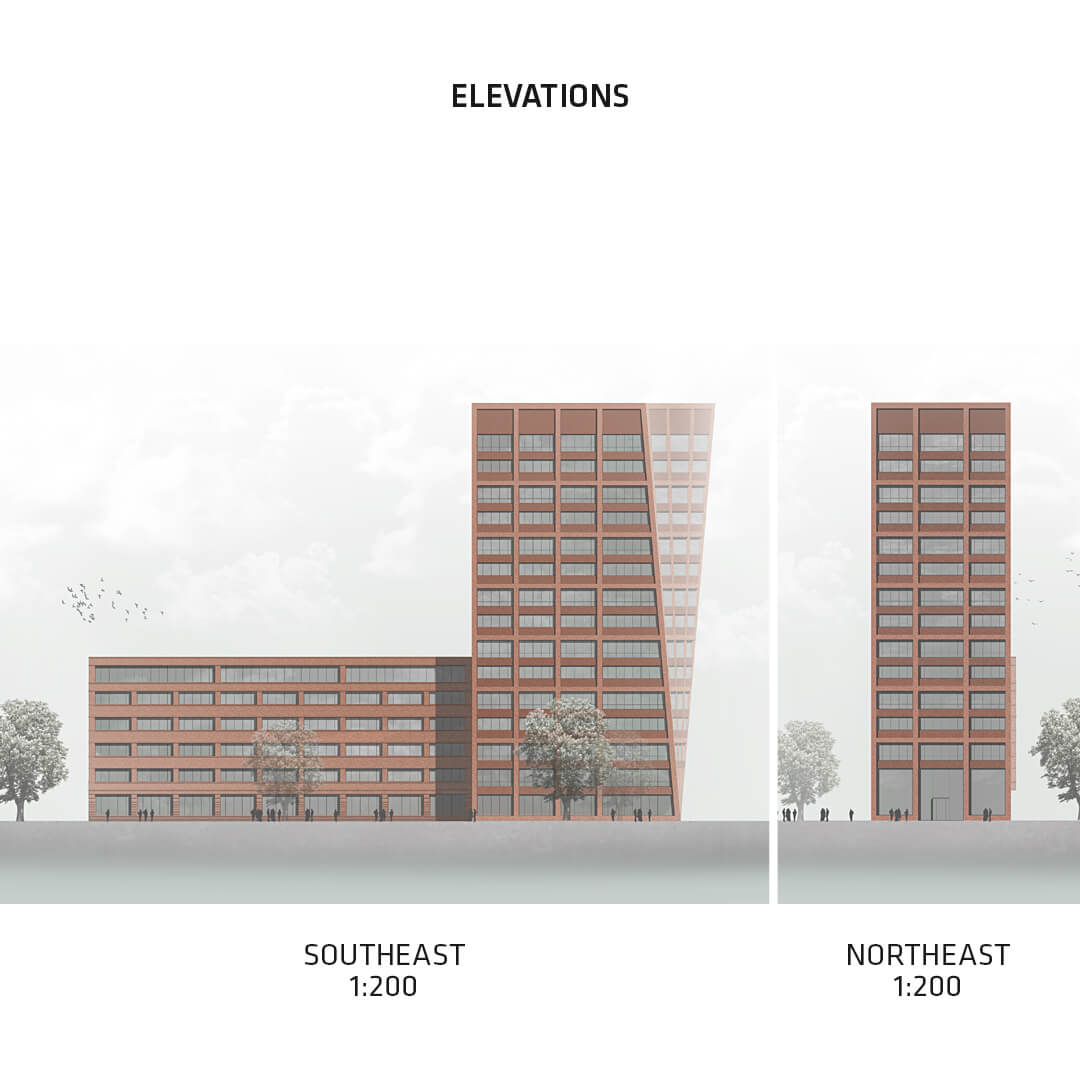 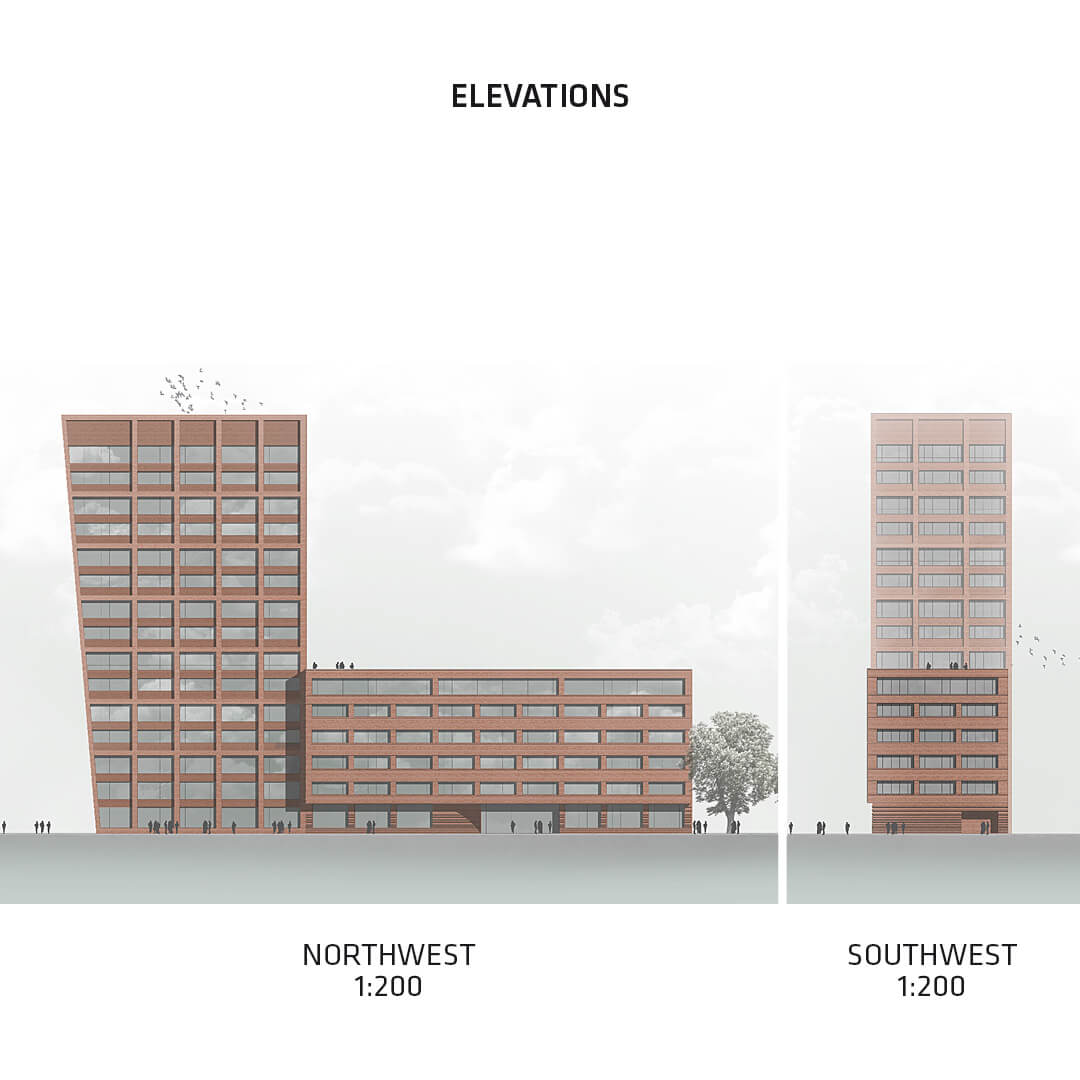 The layout organization: maximum variance.
Tower and building row are characterized by flexible office floor plans. In the tower, the two fire compartments simultaneously form two possible units that can be variably interconnected and also used across floors. The building also fulfills an essential sustainability criterion from the first to the fifth floor thanks to a planned transformation. Five modules are arranged on these floors, which can be combined linearly but also vertically to form various rental units. 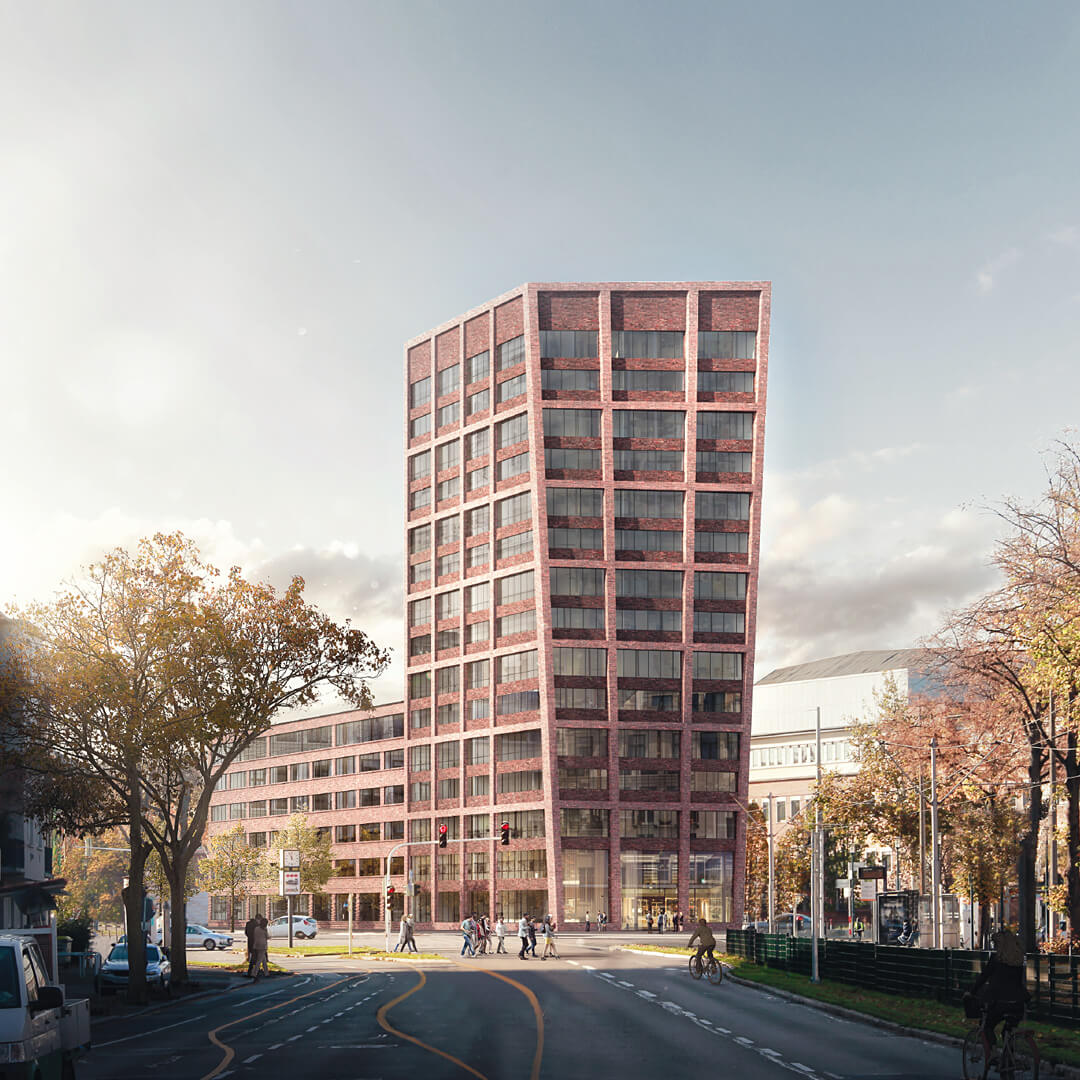 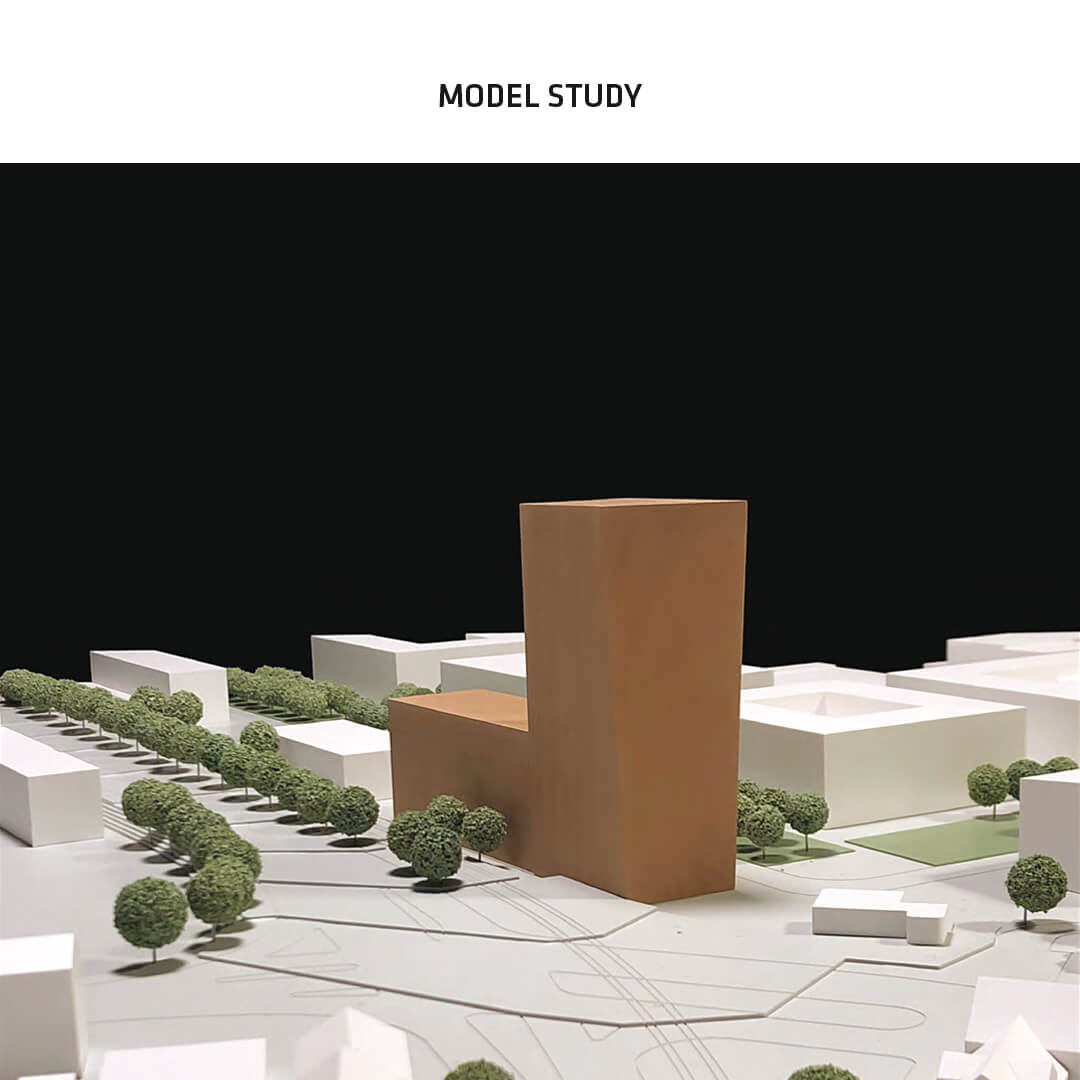 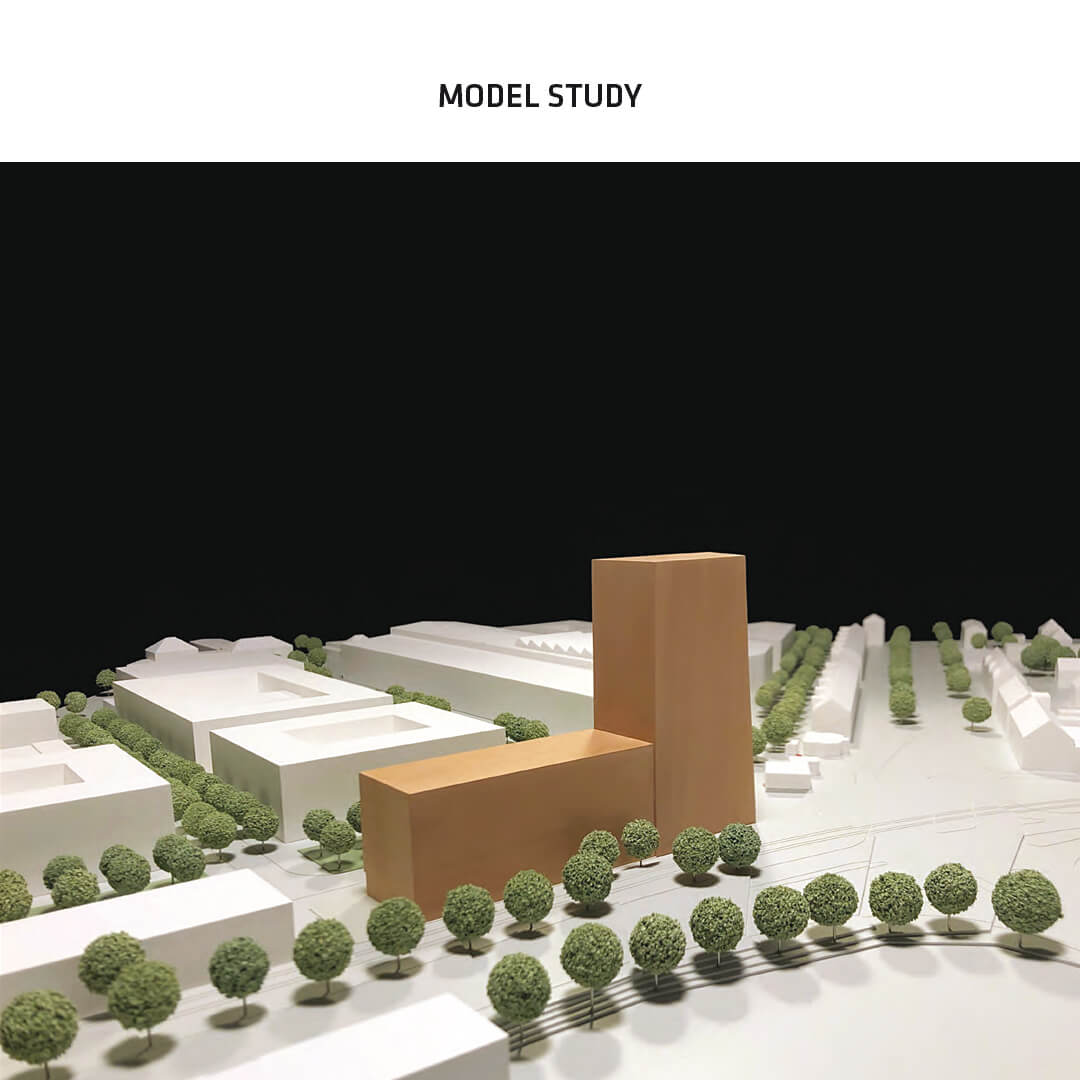 Sustainability: constructively and energetically legible.
The demand for sustainable construction can be read in many ways in the concept of Fischer Architects. The design team chose demolition bricks as the facade material and continued the sustainability concept in the interior. By reducing the amount of concrete in the ceilings and load-bearing walls and using prefabricated clay elements, the planners conserve resources and reduce the CO2 emissions associated with the production of cement. The guiding principle of sustainable building completes the ambitious energy concept.