Lisbon Metabolizing seeks to re-establish a symbiotic relationship between the illustrated architecture of La Baixa and today’s changing society.

Lebbeus Woods: “the language of architecture can include the unpredictability that arises from the dynamism that has become the essence of modern existence”. 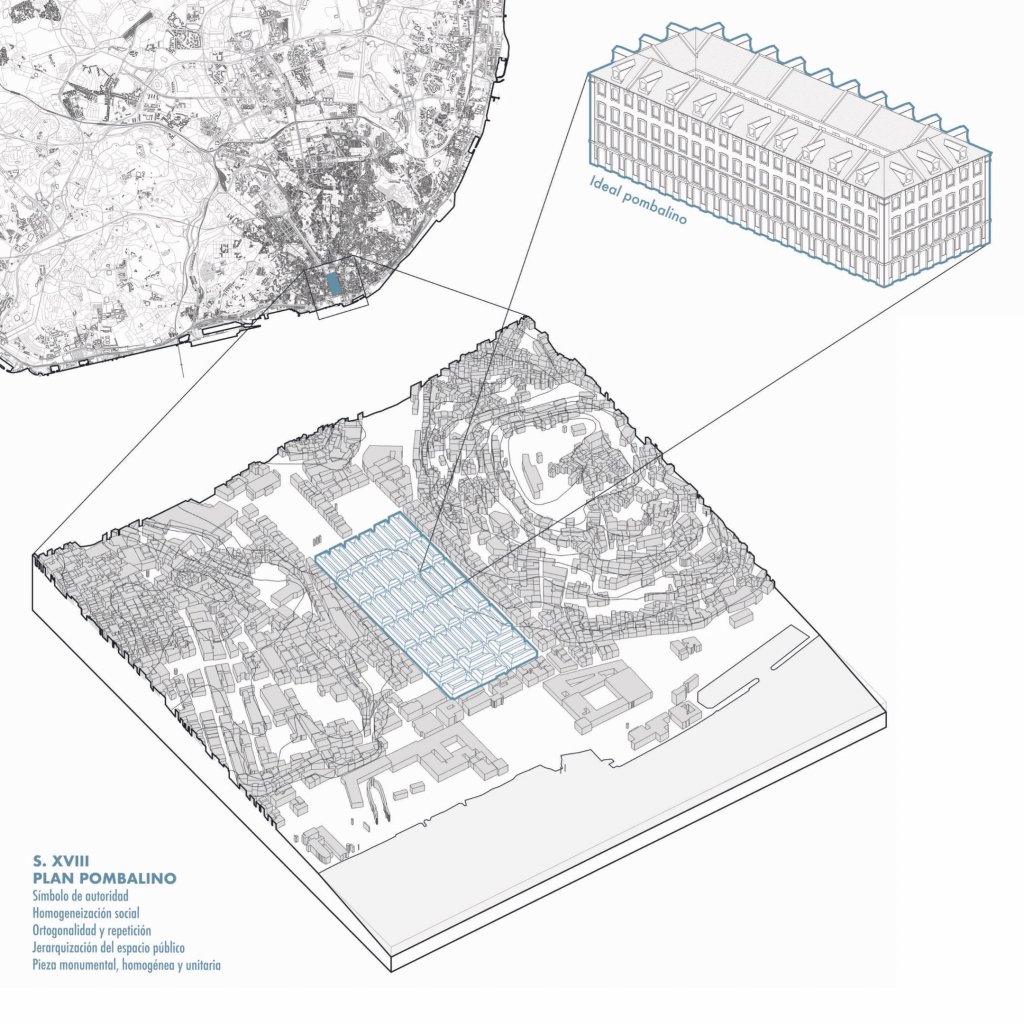 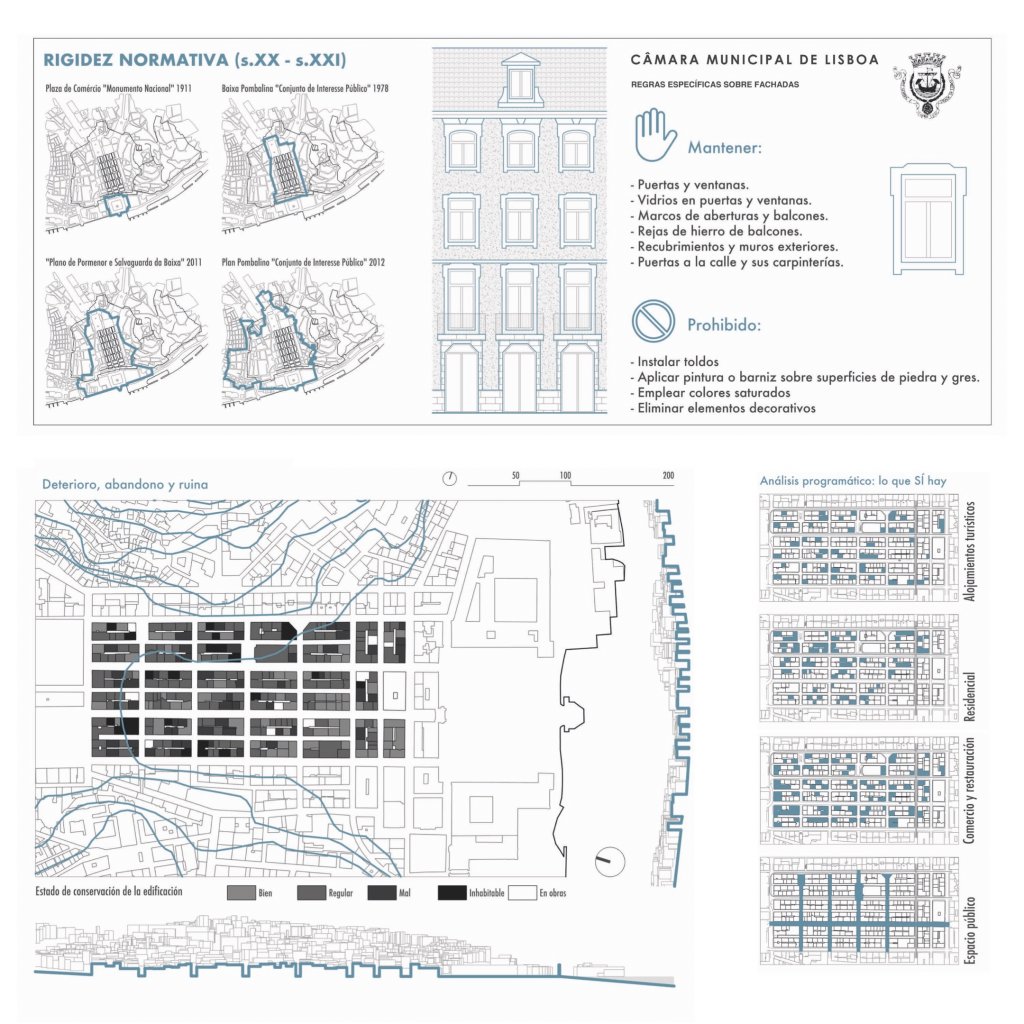 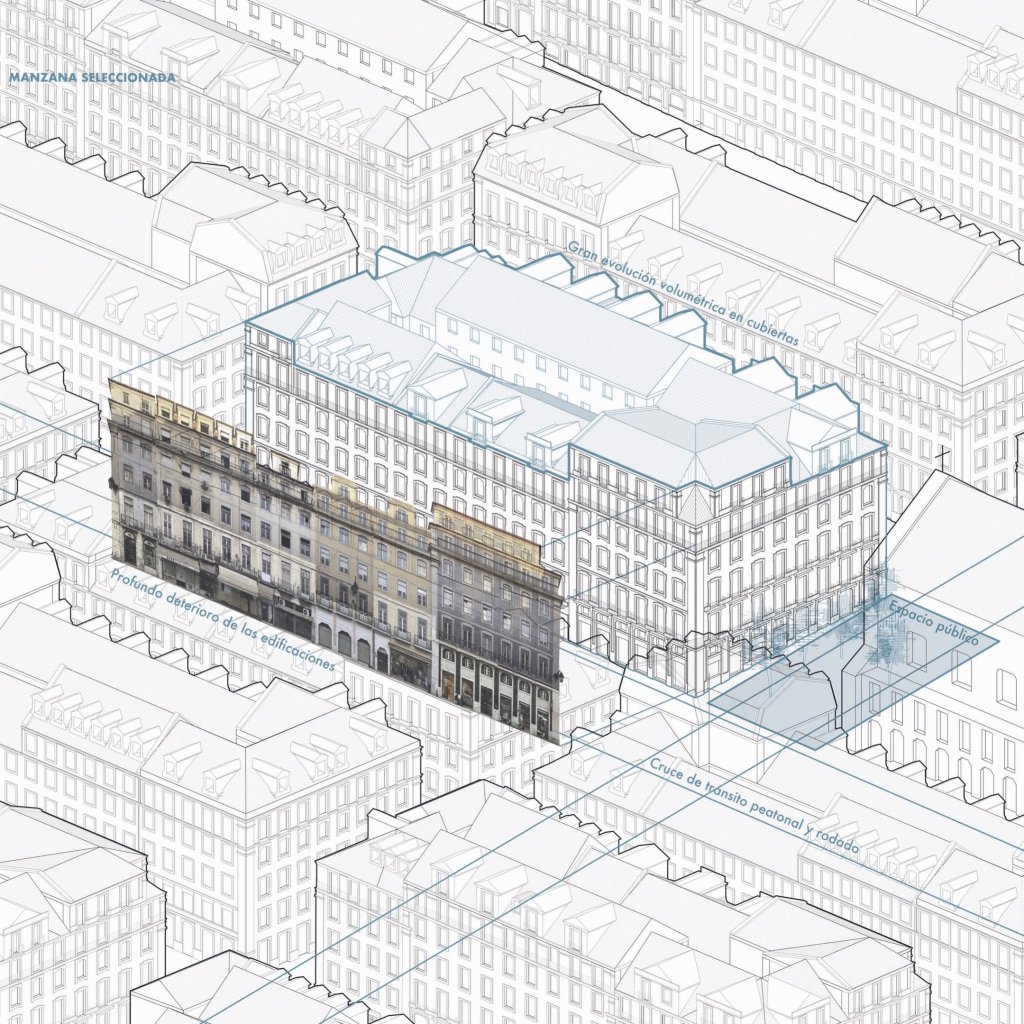 La Baixa is the heart of Lisbon. Since its construction after the earthquake of 1755, it has been a role model and the ideal of the enlightened city. Over the years, this urban fabric has evolved. The development of technology incorporated elements of its time, such as metal structures, and the progress of society was reflected in a profound volumetric and linguistic alteration of the buildings. All this reflected the progress, diversification and democratisation of a society that was moving away from subjugation to authoritarian power. This parallelism between the development of society and its reflection in the city has been interrupted for decades. The strict preservation rules imposed by the administrations have frozen the evolution of La Baixa and the people of Lisbon have abandoned their urban symbol. 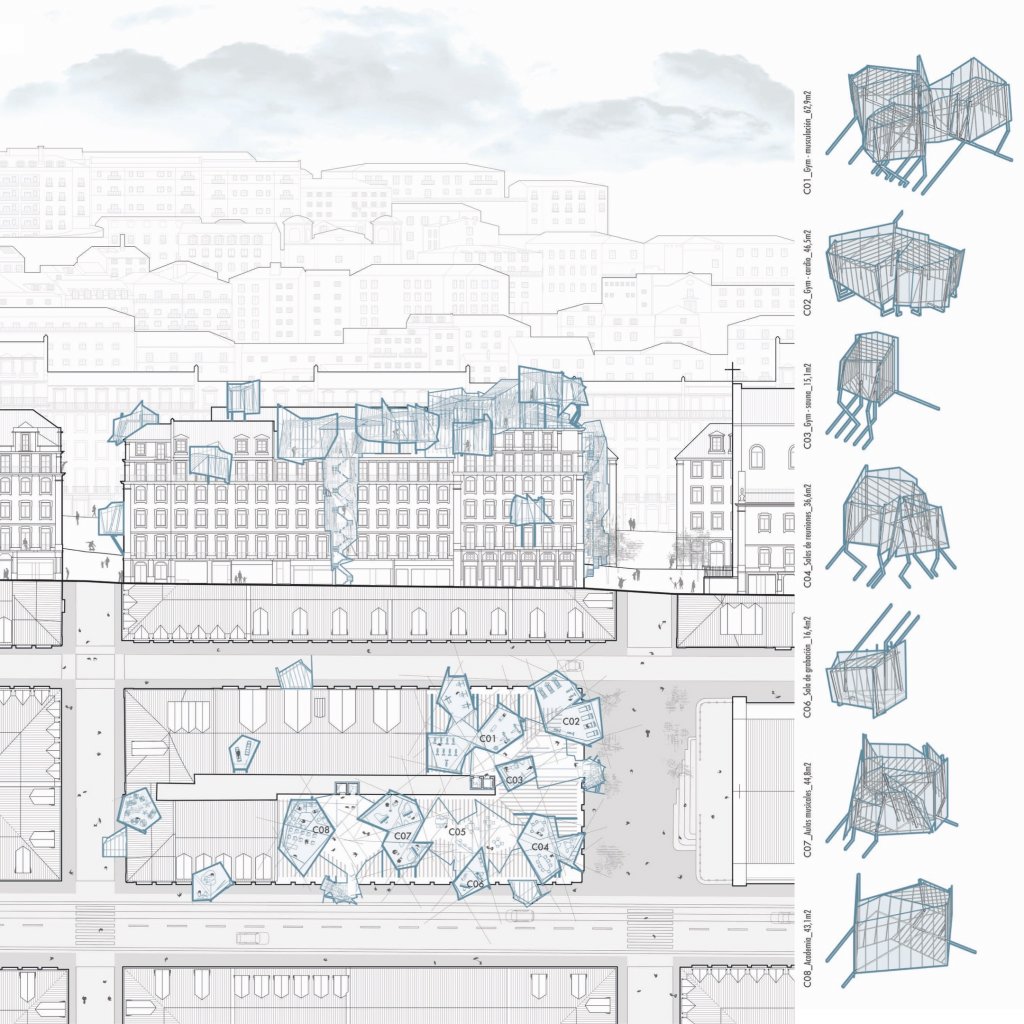 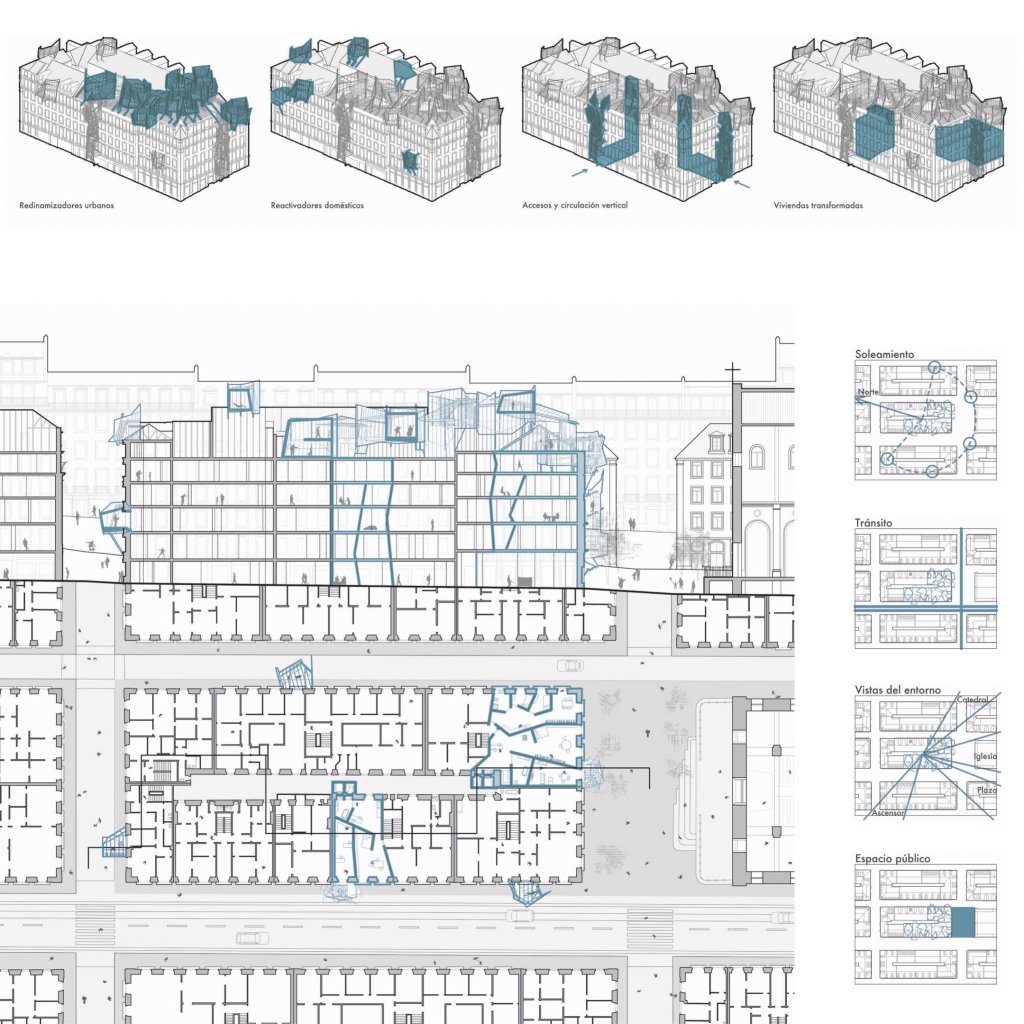 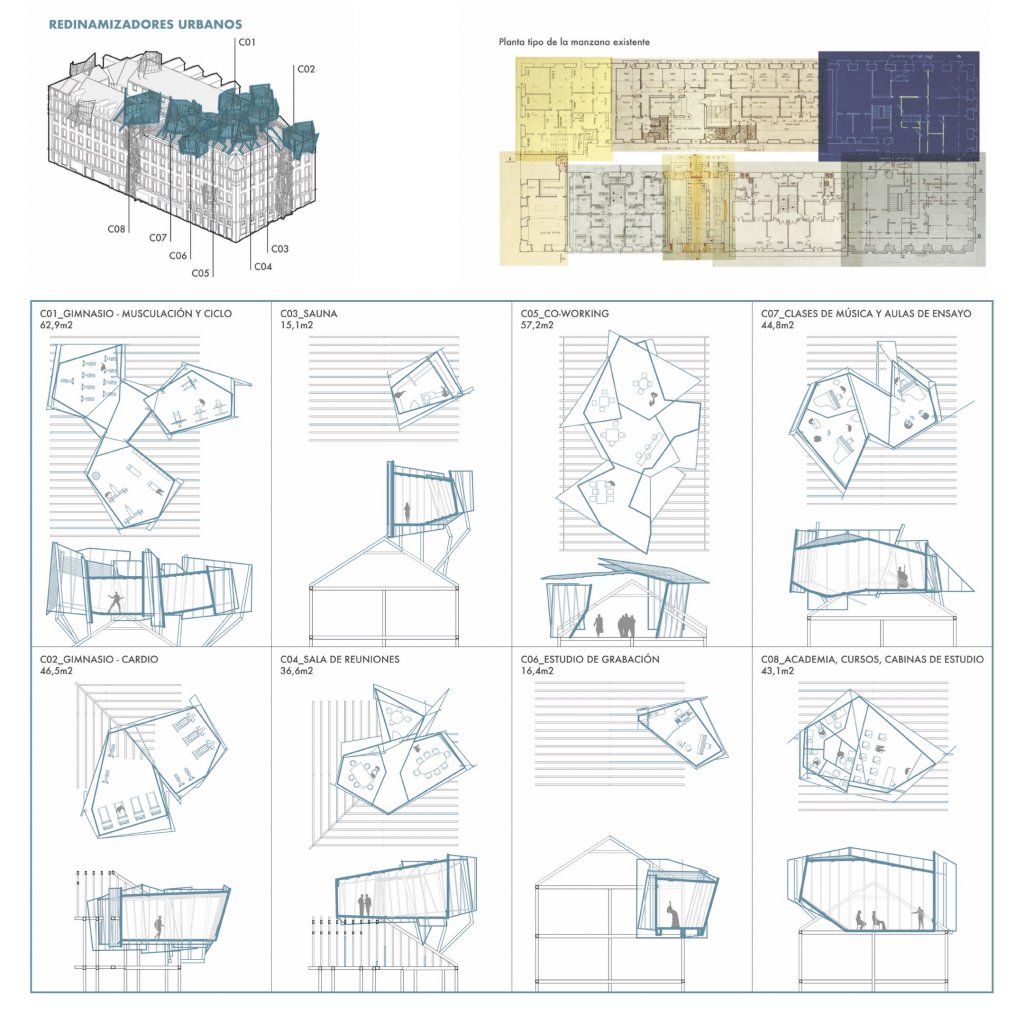 The project reads the current deficiencies (emptying of population, loss of mix of uses and building deterioration) and proposes the insertion of public programmes of daily use that reactivate the surrounding area and attract back the local population. These activities are sports centres (cardio rooms, sauna, weight training…), educational centres (classrooms for academies, music classes, courses…) and work centres (co-working spaces, meeting rooms, conference rooms…).

Taking the wooden lattice of the Pombaline cage as a starting point, a series of spaces will be created by altering the pre-existing structural elements. The theoretical approaches to aggressive design worked out by Coop Himmelblau and Lebbeus Woods, among others, are put to the test, developing strategies of formal liberation that reactivate areas in crisis. In this way, unknown, free spaces are created. A geometry deeply rooted in the pre-existence and its past, but which is now once again a reflection of a changing, diverse and energetic society. 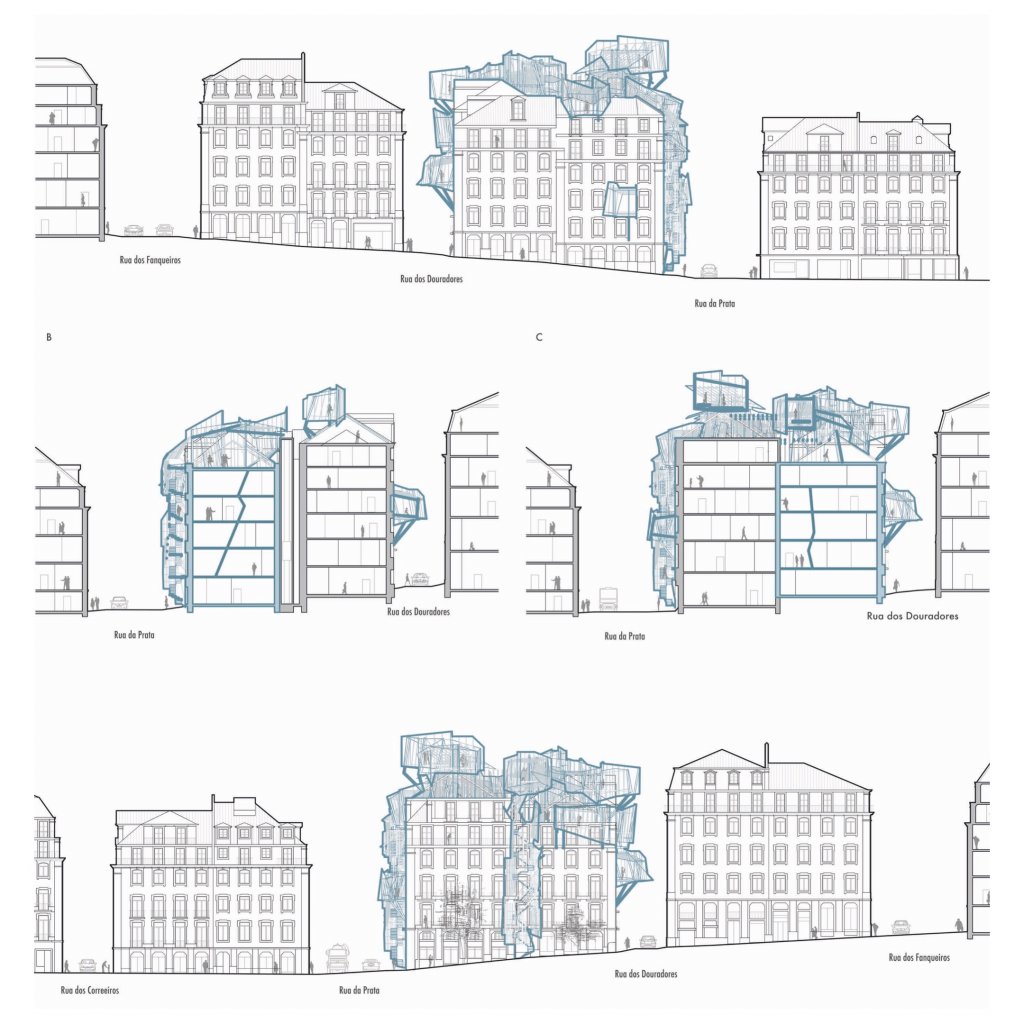 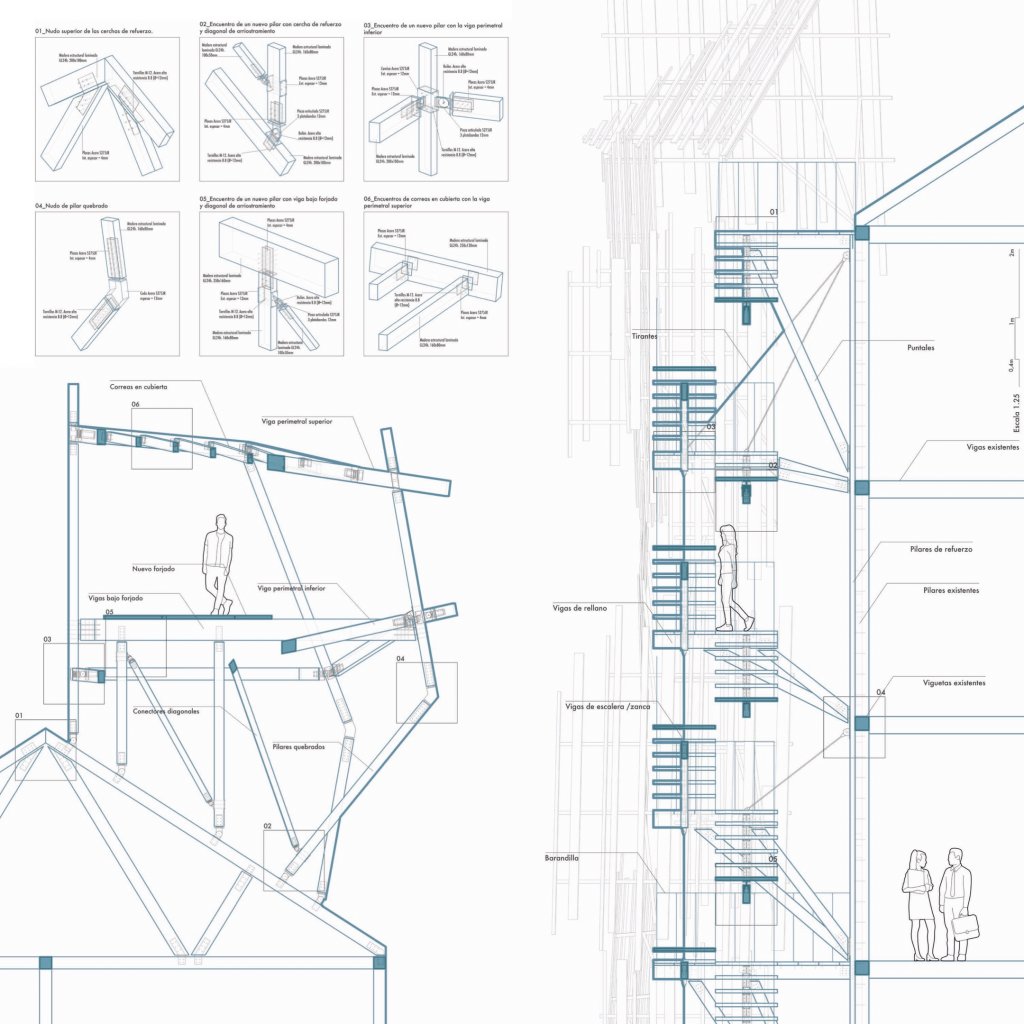 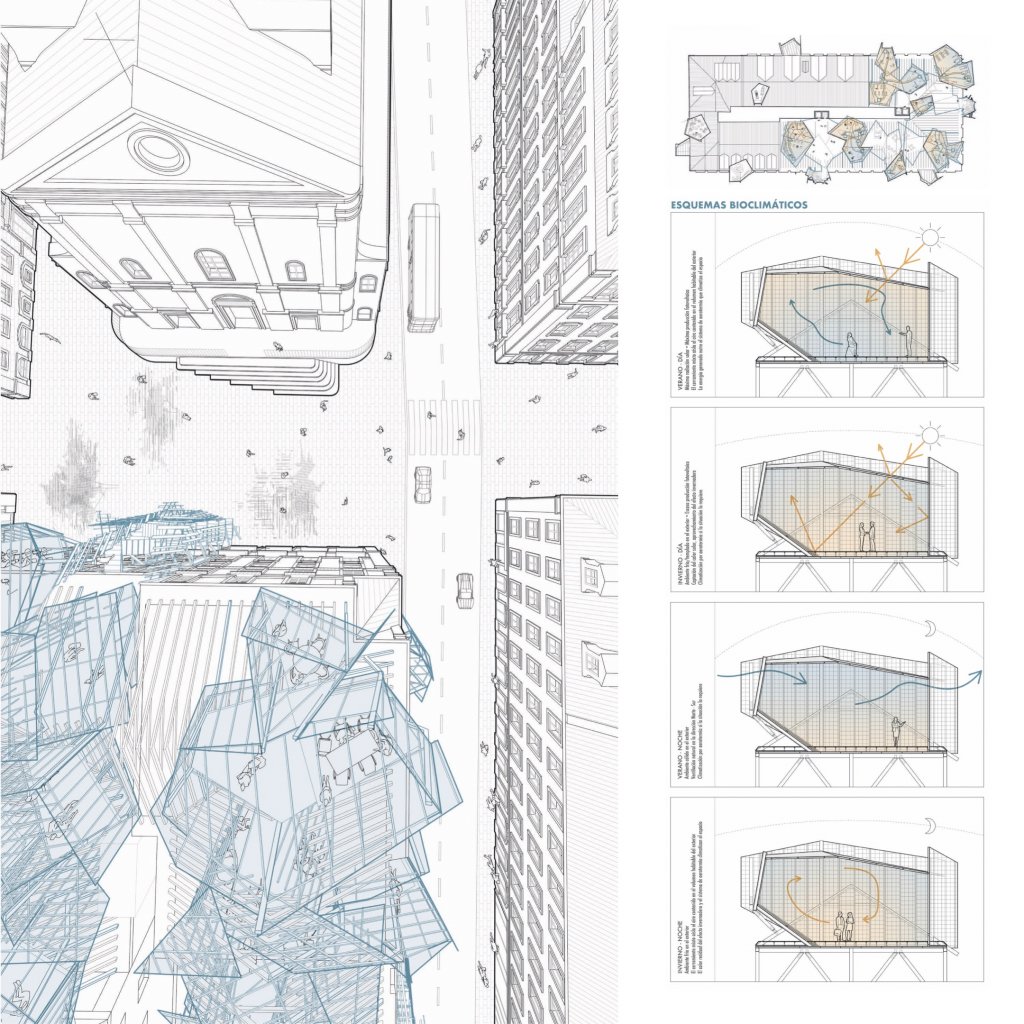 This prismatic block in the Baixa is being transformed. Its volumetry is altered in order to grow freely. The projected devices colonise the volume and are visible from its immediate surroundings. The transformation also affects the interior of the central body. The vibration of this new architecture alters the pre-existing orthogonality. The devices that emerge at the top will compose the set of shared activities and the rest will improve the existing dwellings.

In short, Lisbon Metabolizing is a revision of the ideal Pombaline model (volumetrically and constructively) and its adaptation to current urban dynamics through a new symbiotic atmosphere between the illustrated city and contemporary architecture. The city is once again a reflection of the passage of time and the superimposition of temporal layers brings richness and diversity to Lisbon’s La Baixa, which recovers its vitality, its everyday life and its dynamism. 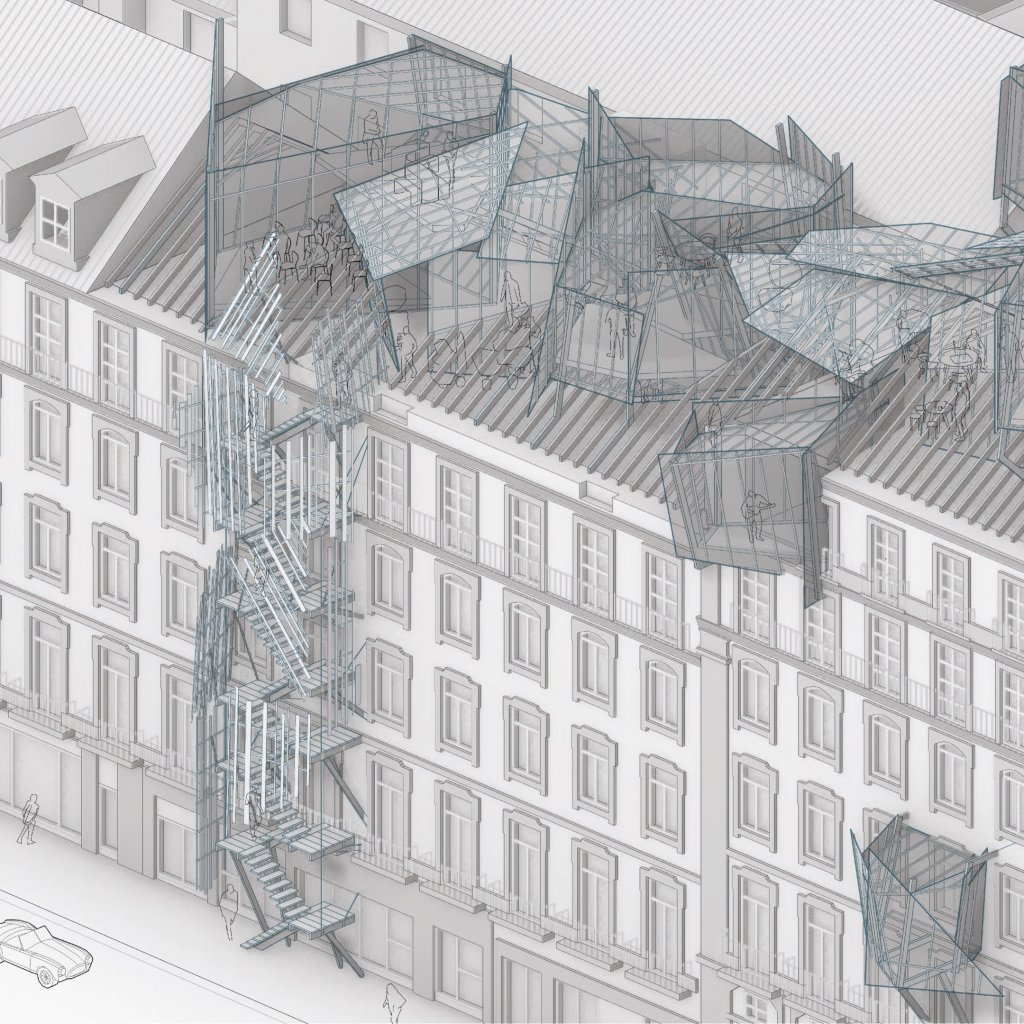 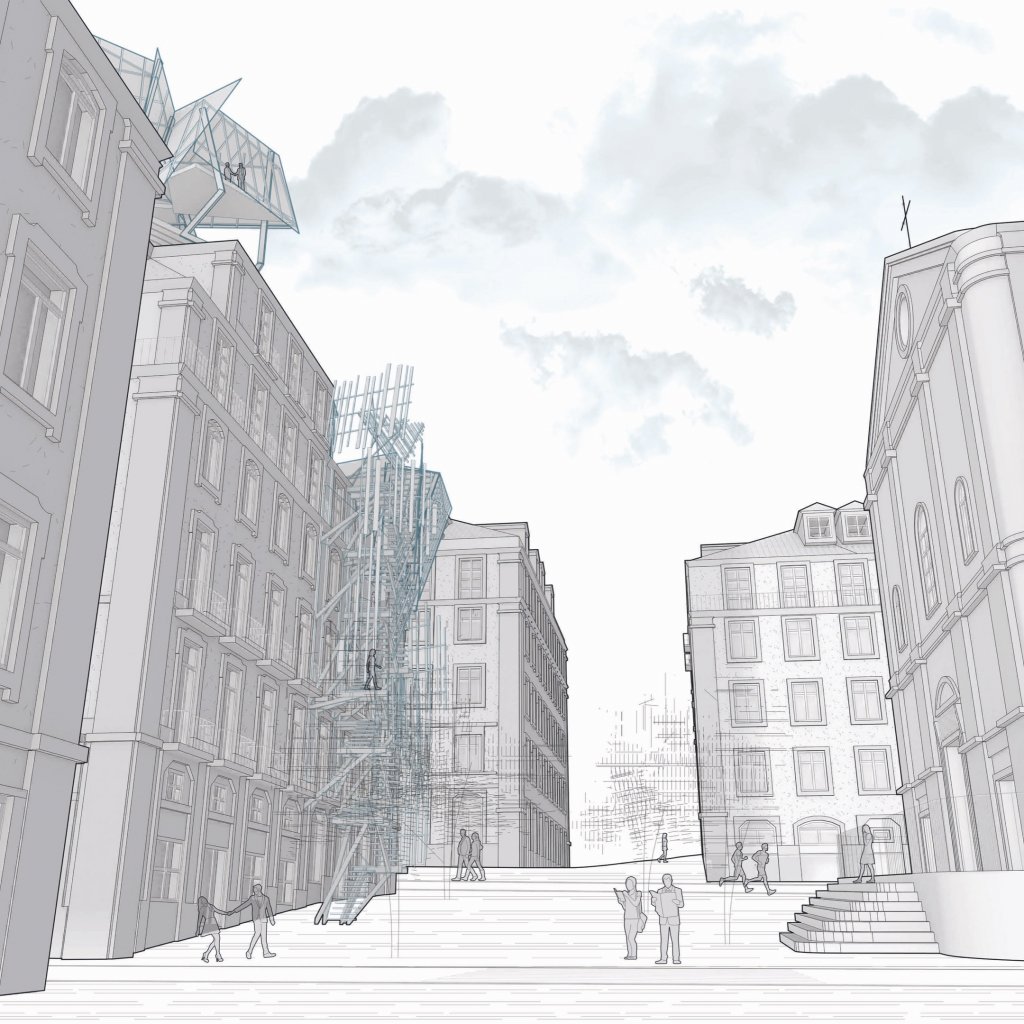 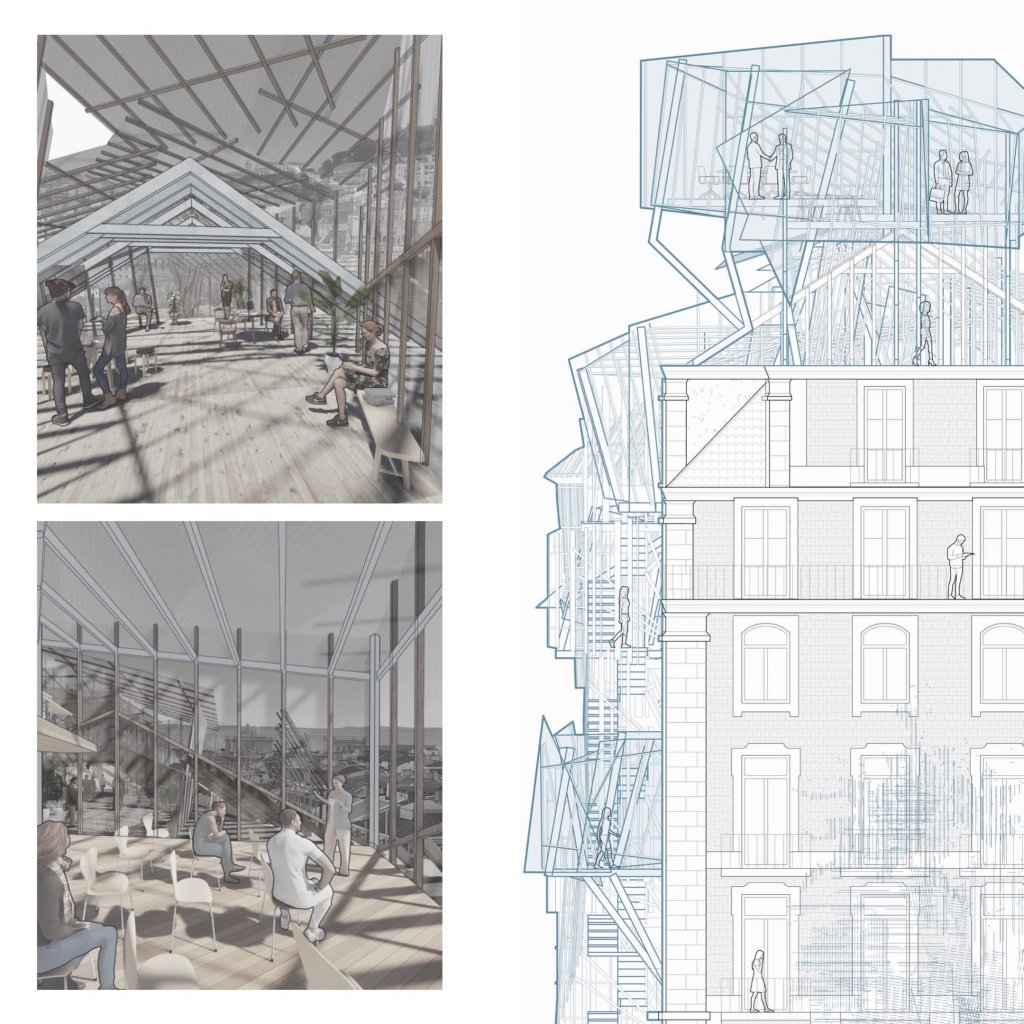 Lisbon Metabolizing is a manifesto for the future of our cities. It is a project that vindicates the city and architecture as physical testimonies of the passage of time and the evolution of the society they host. Classicism and contemporaneity coexist in this regeneration of Lisbon.