The project is understood as an oportunity of consolidating the useless space near the Collodi’s river. As an element of conection -visual and real- the library is located in the edge of the existing paper factory riverside and looks towards the via Benvenuto Pasquinelli -the main Collodi road- and the Parco di Pinocchio. 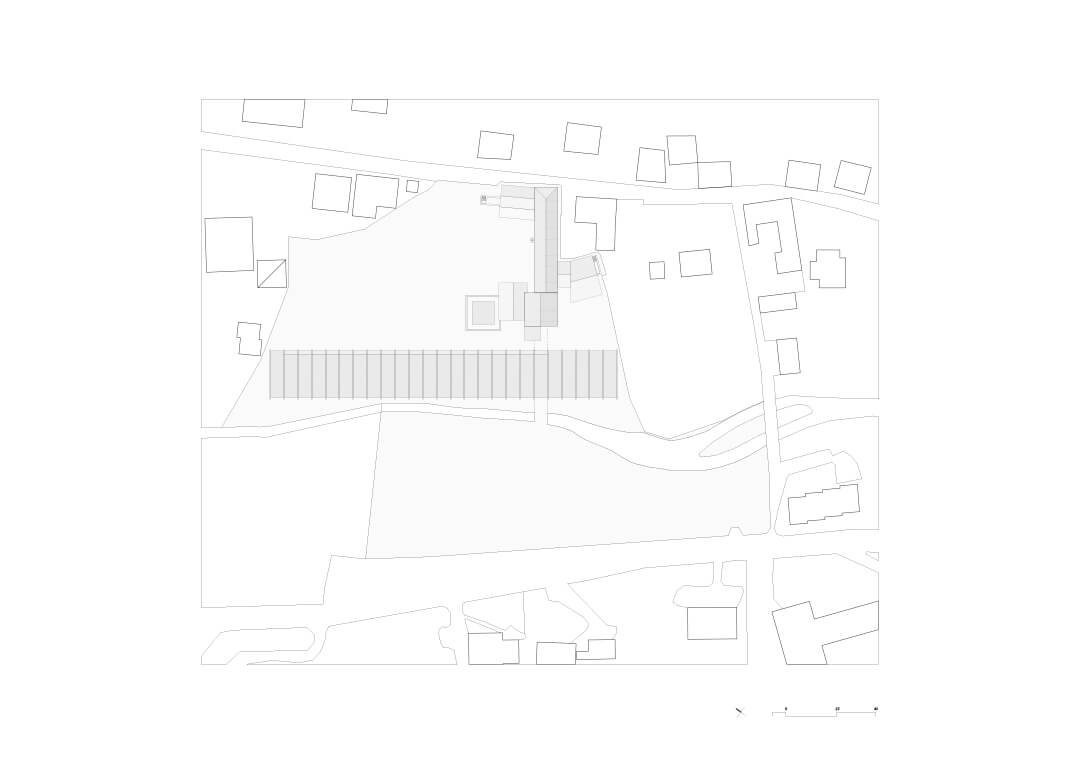 The old paper factory placed within the limits of the intervention area becomes an element that can not be ignored. The main idea is to preserve this element and to use it to put part of the functional program in order to revitalize and give a new use to something that nowadays is uncared-for. Besides, this factory is an important Collodi heritage that needs to be mantained in a way that the town can teach its history to the young ones.

This new intervention is placed near the old paper factory but always respecting its volume and the void that must be around it in order to understand the whole complex with no distractions. To achieve that, the new Pinocchio Children’s Library is buried: as a contention element that bears the factory, it also creates a huge open space that surrounds the preexistence and permites to develop activities on it. 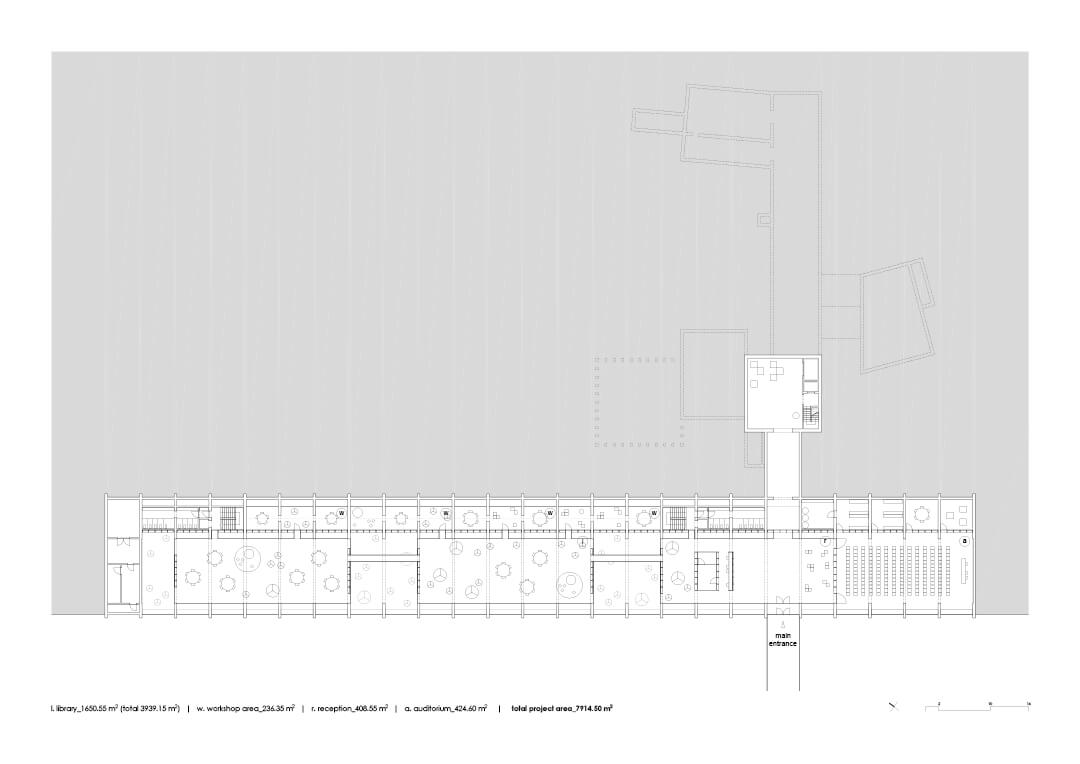 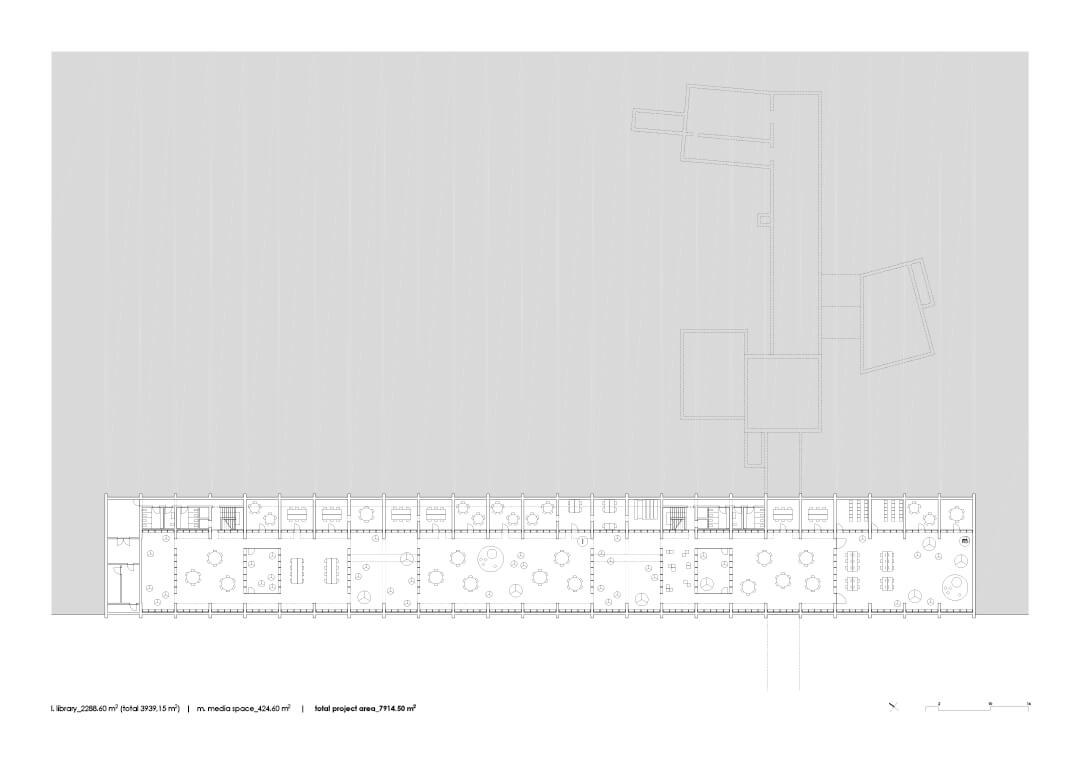 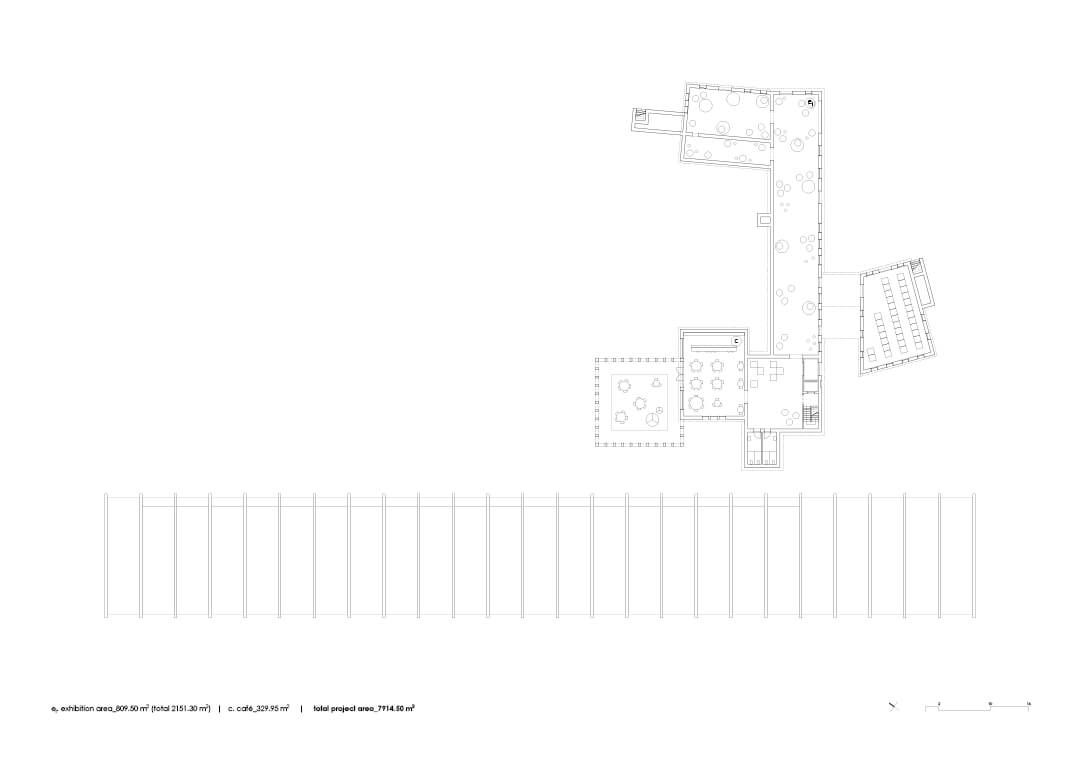 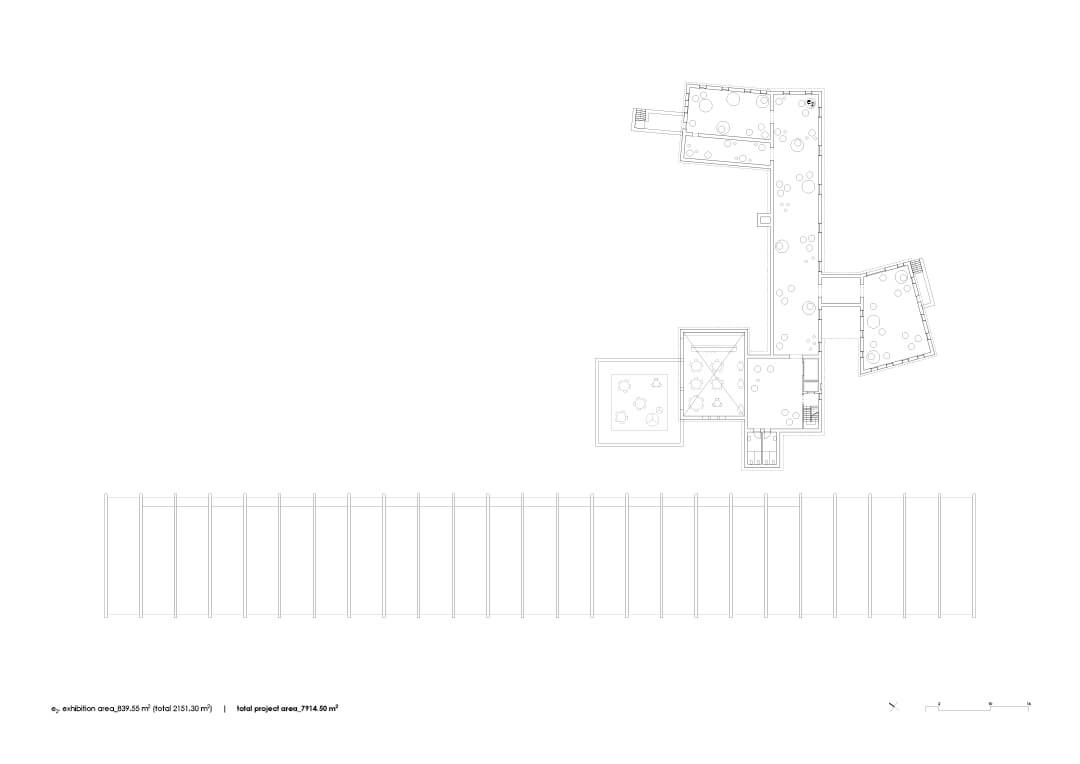 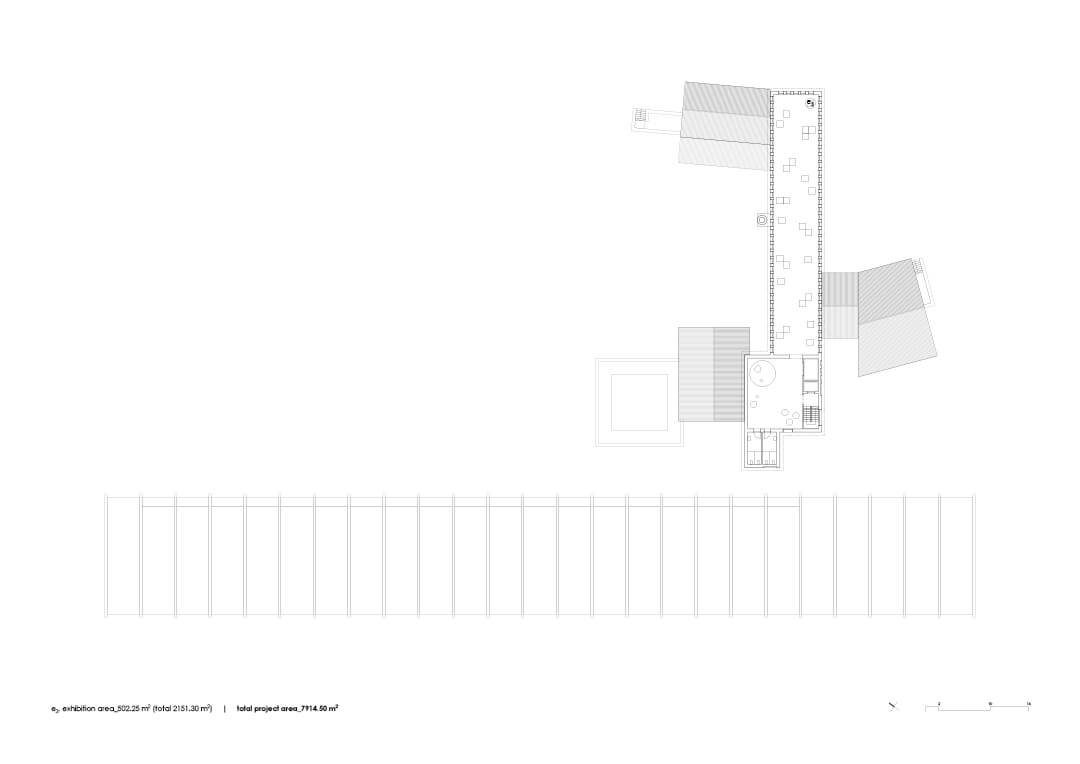 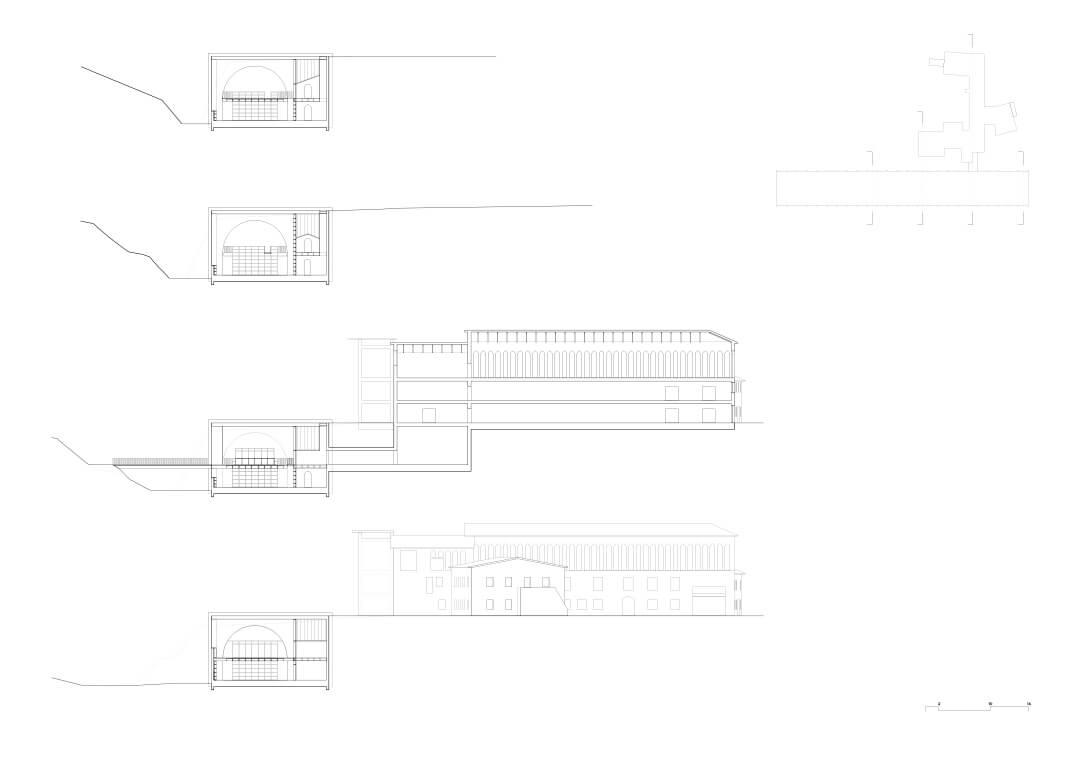 The main access is through the library’s new facade. Although all the elements that compose the whole cultural complex can function with independence one from the other, the aim of creating a unique reception space help us on redirecting people to the different parts of the program.

As in a fairy tale that introduces you to a new world, the bridge that allow pedestrians to cross the river -understood as a magical frontier- get them to a new reality, a huge space from which they can go to wherever they want: straight on there is the exhibition space -located in the paper factory, understood as an oportunity to revalue a Collodi’s legacy-, on the left there is the library and to the right there is the auditorium. The cafeteria is directly linked to the exhibition space and its foyer and also with the upper exterior space.

This entrance also adds importance to the new cultural centre and welcomes the new visitor that arrives for the first time at Collodi. 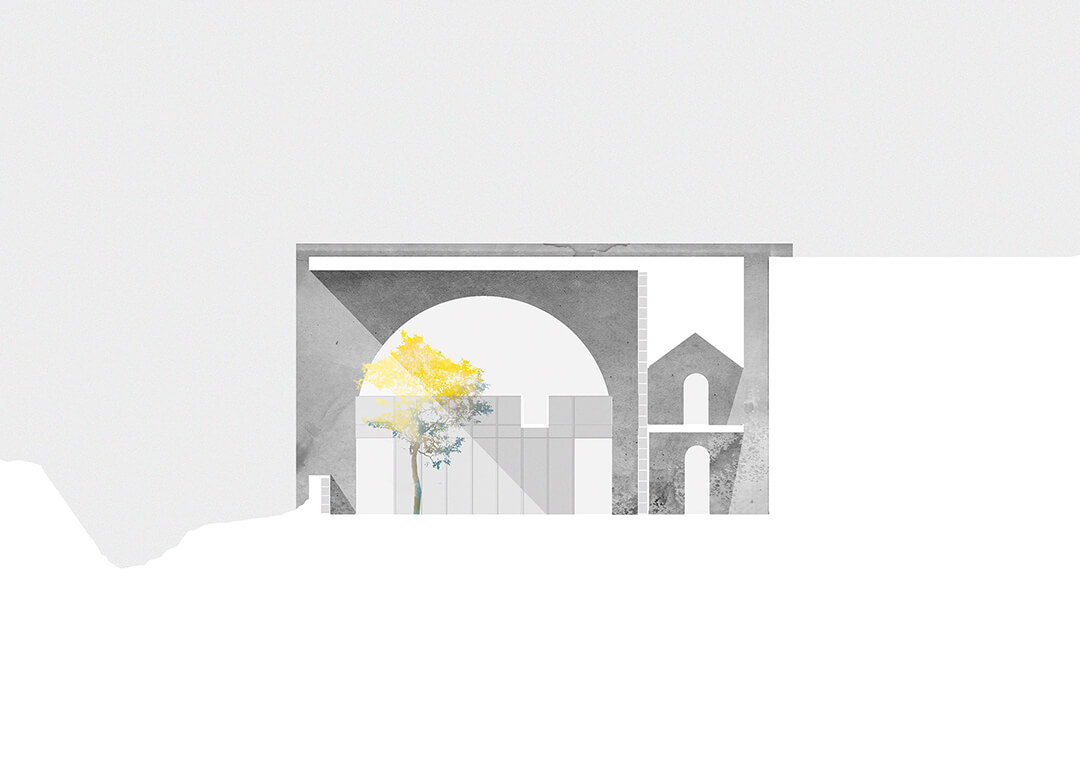 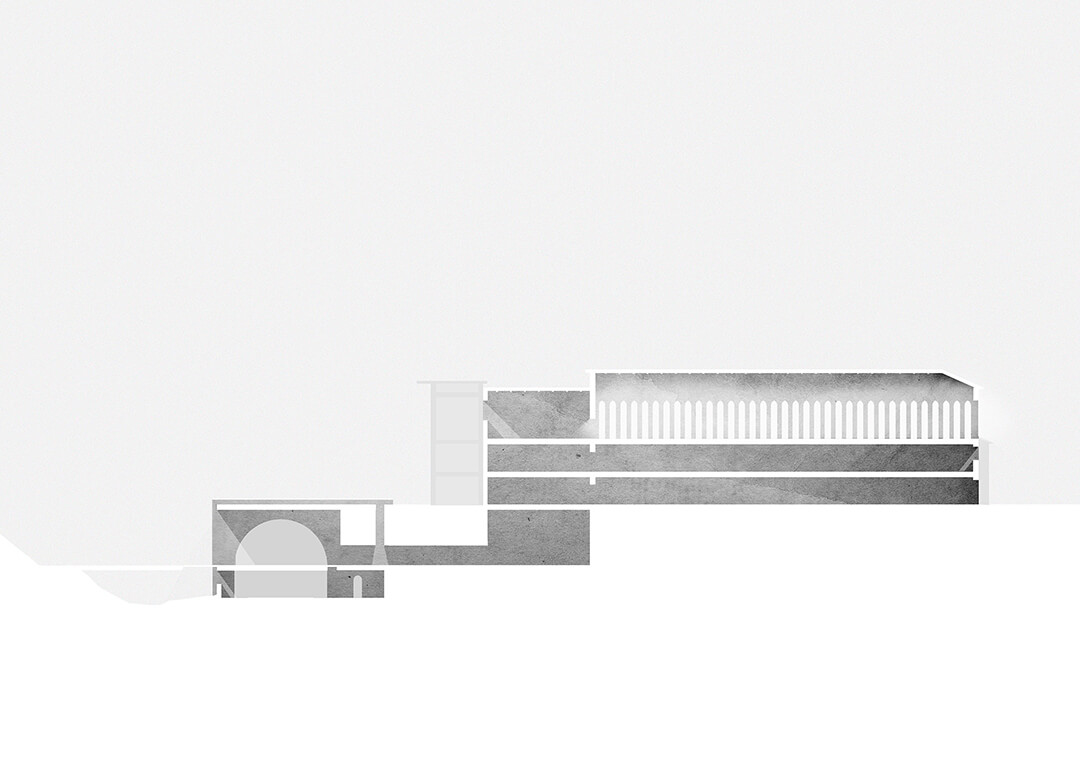 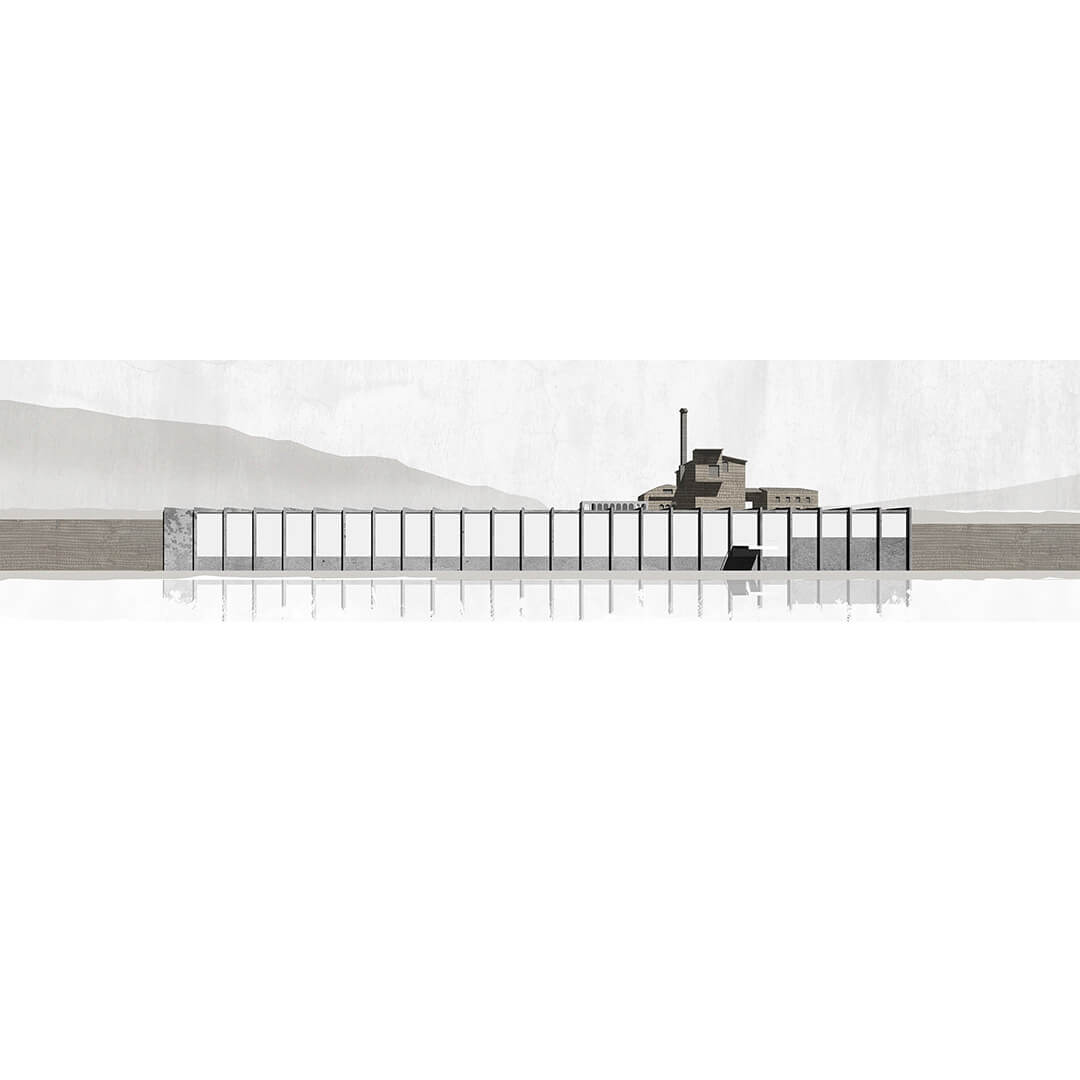 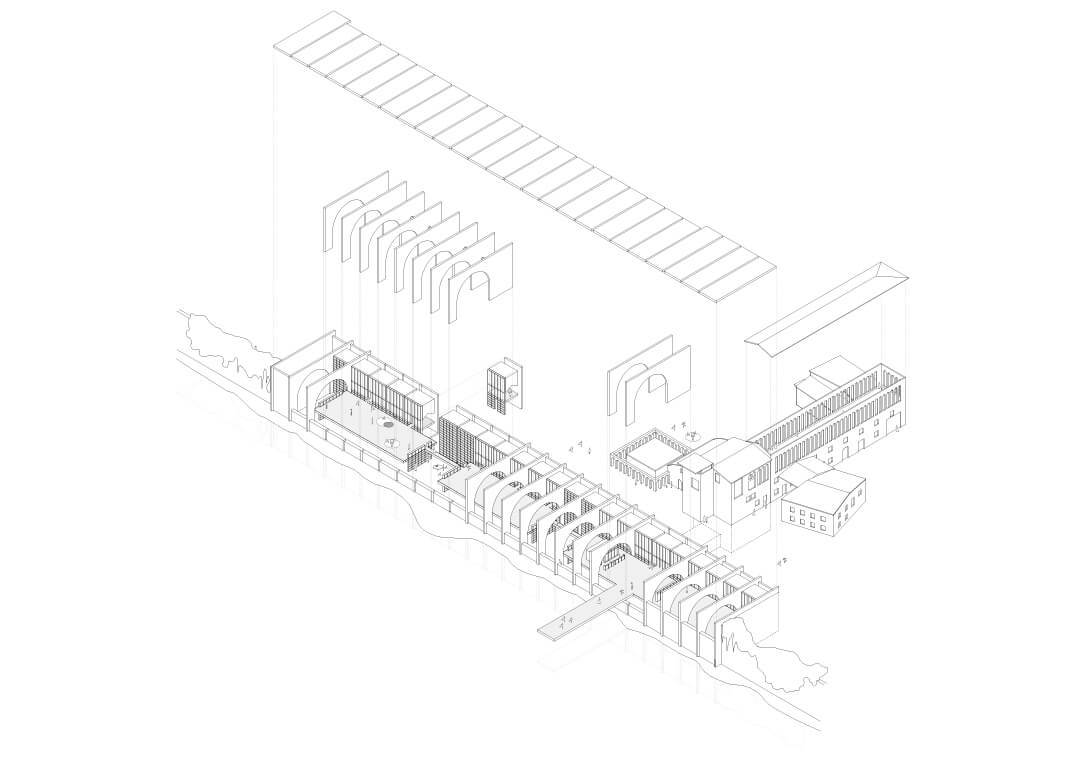 The program located in the old paper factory is shaped with the maximum respect to the preexistence. Keeping floors and ceilings, restorating the damaged parts and adding a new element -the cafeteria- that is directly related to this factory architectural image.

The greatest doubt resided on how create a new element that could embrance the remaining functional program and at the same time create a breathtaking space for the kids to learn. To shape this element we proceed with a unique structural element that -as usually happens in the factory architecture- is repeated to infinity. Piking up some ideas from classical and modern illustrations of Pinocchio’s tale, we proceed on creating a skeleton -a sea creature skeleton- made with arches that could generate a great void that easily works as a library. 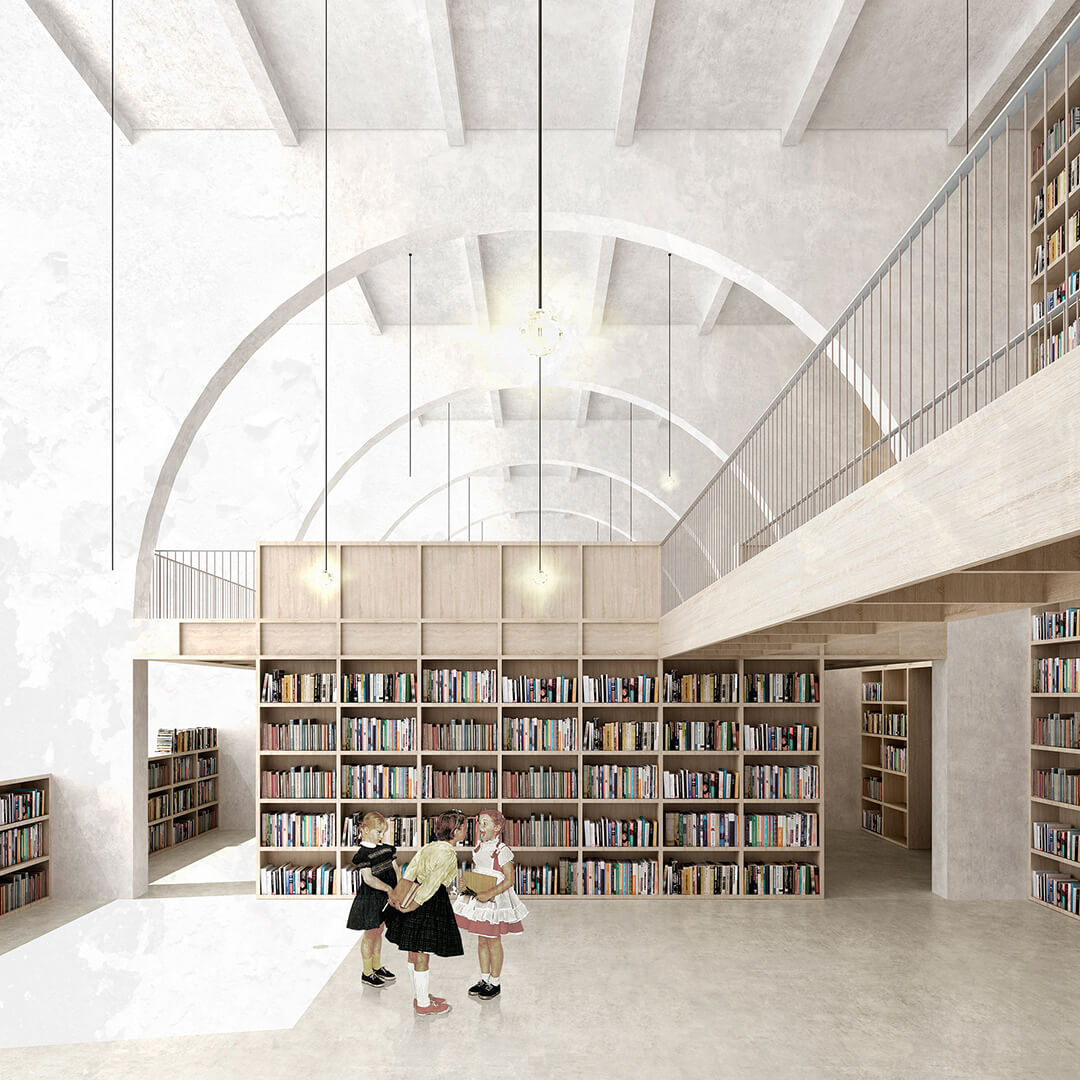 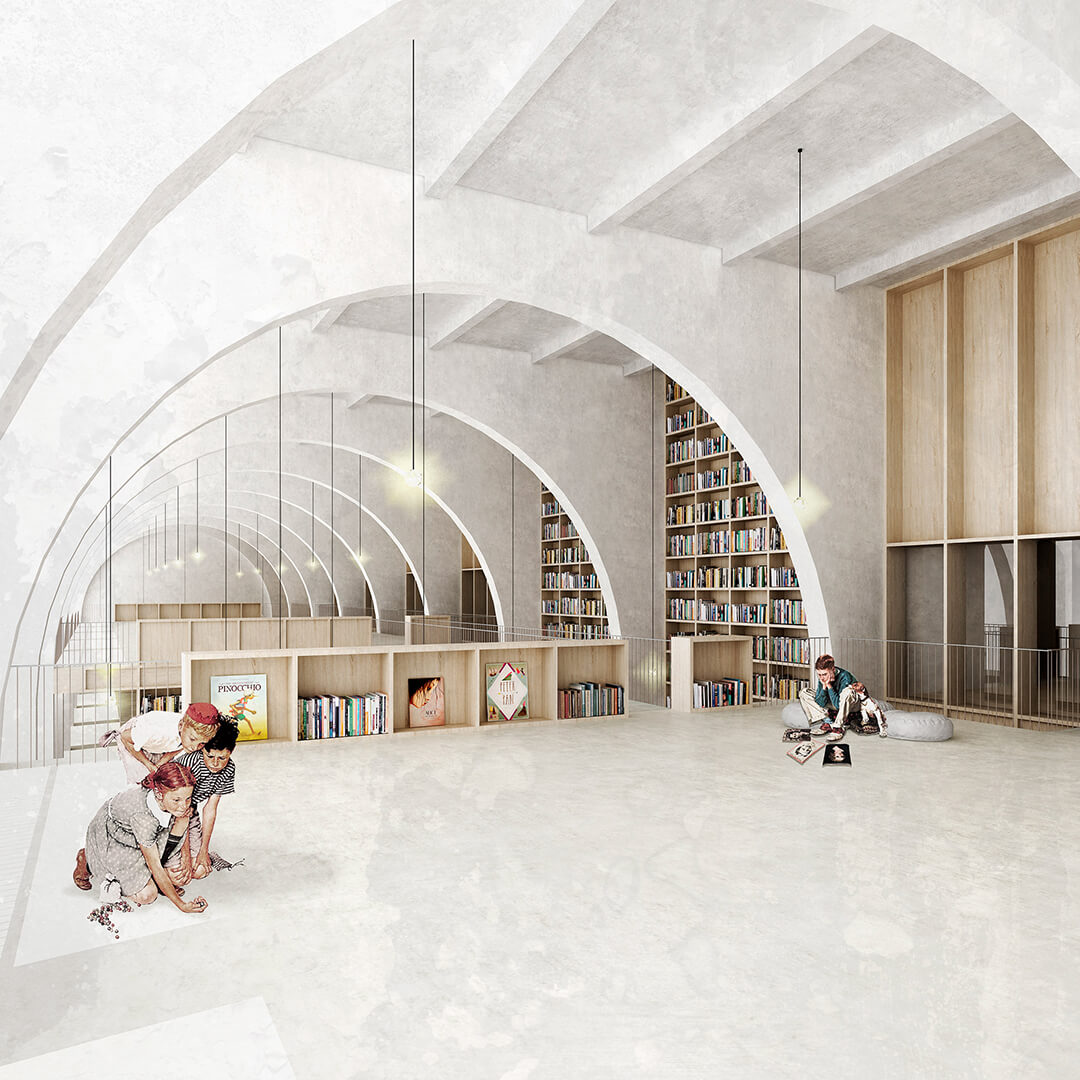 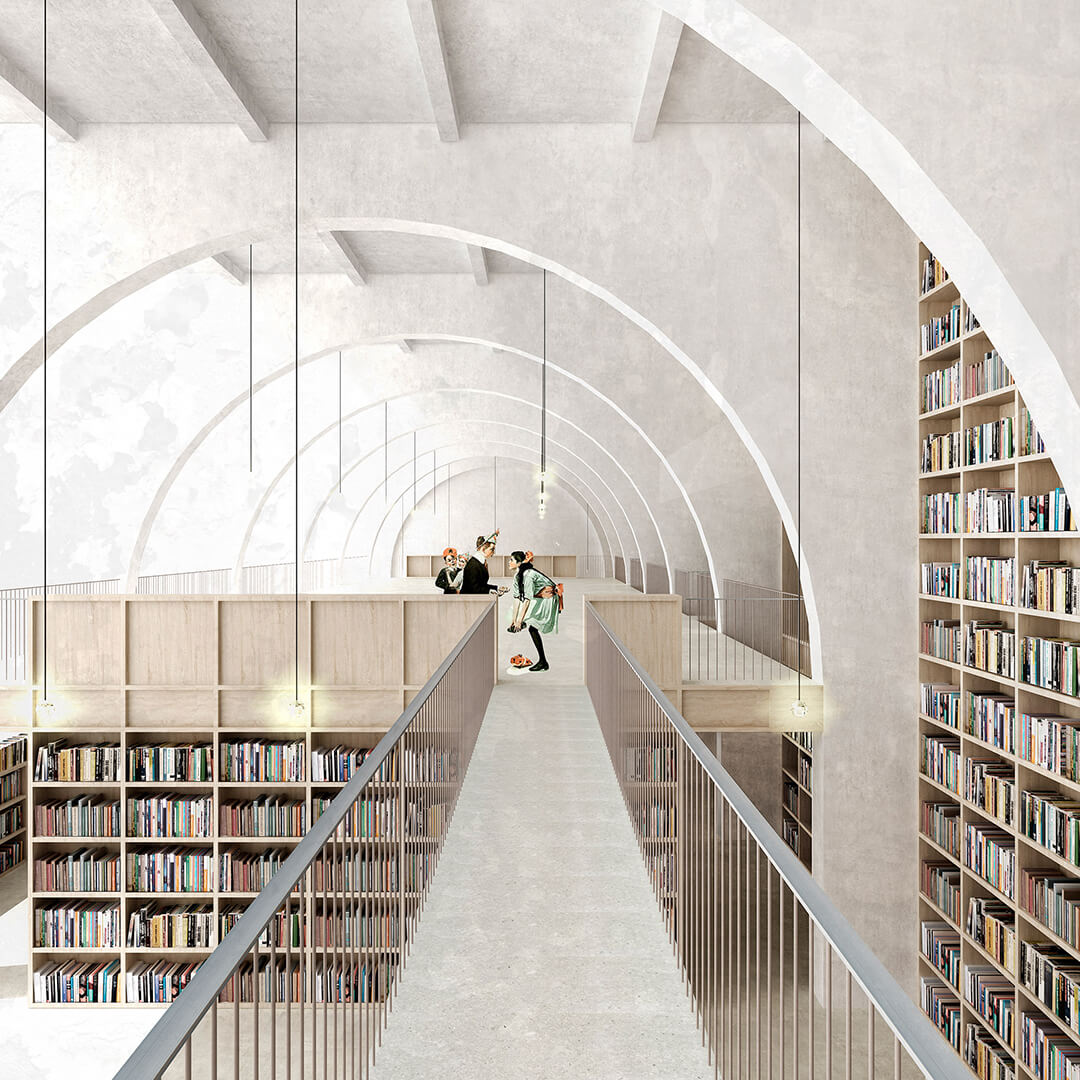 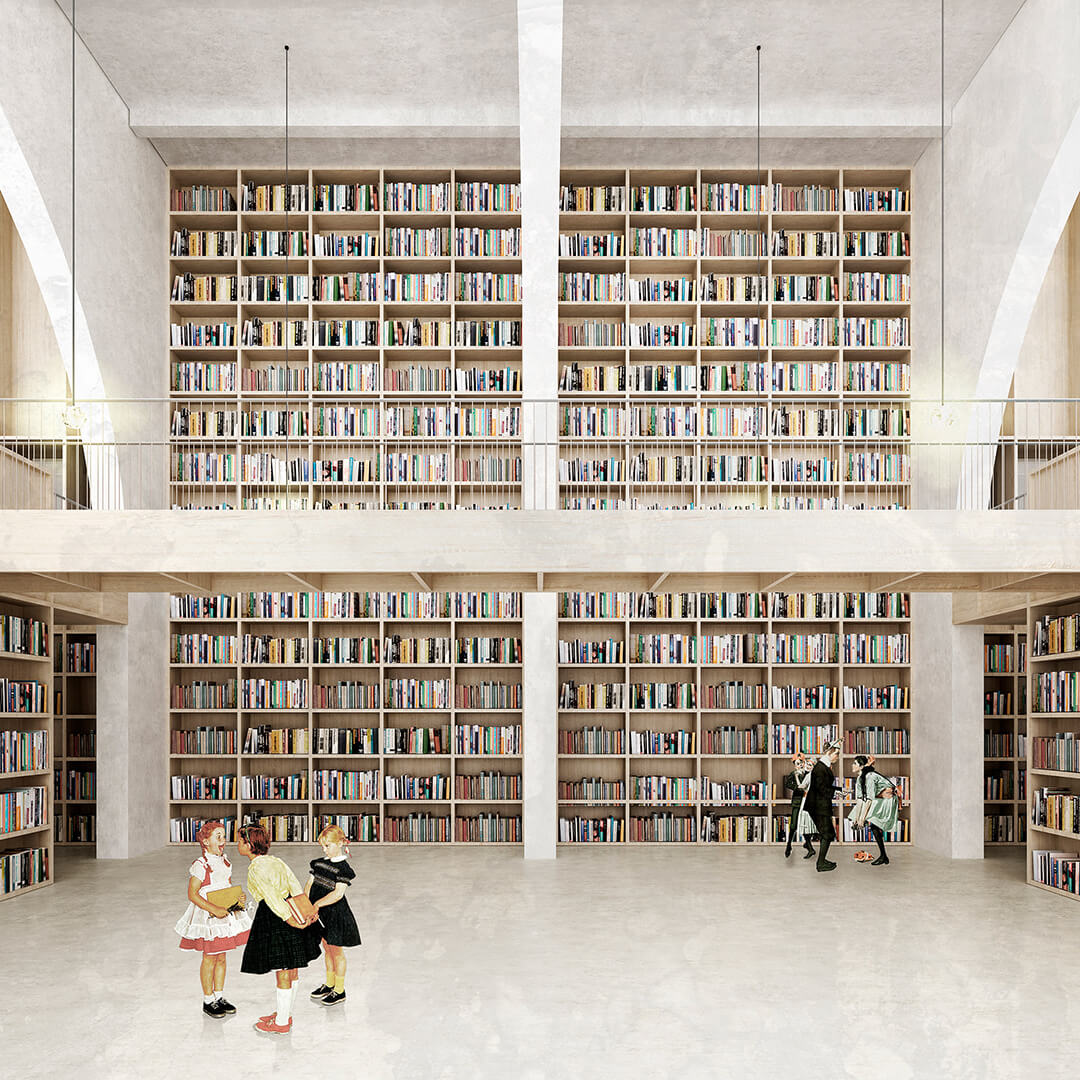 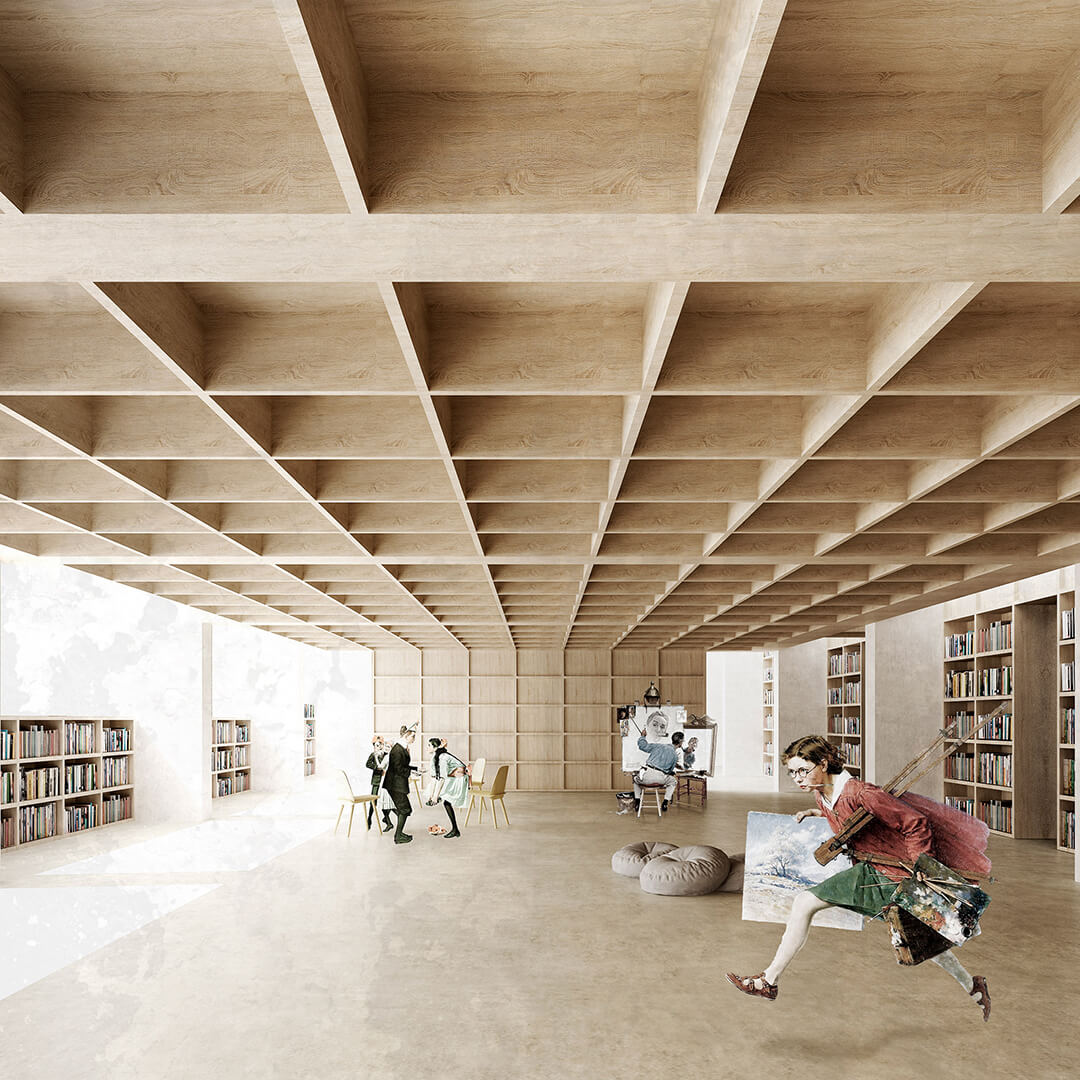 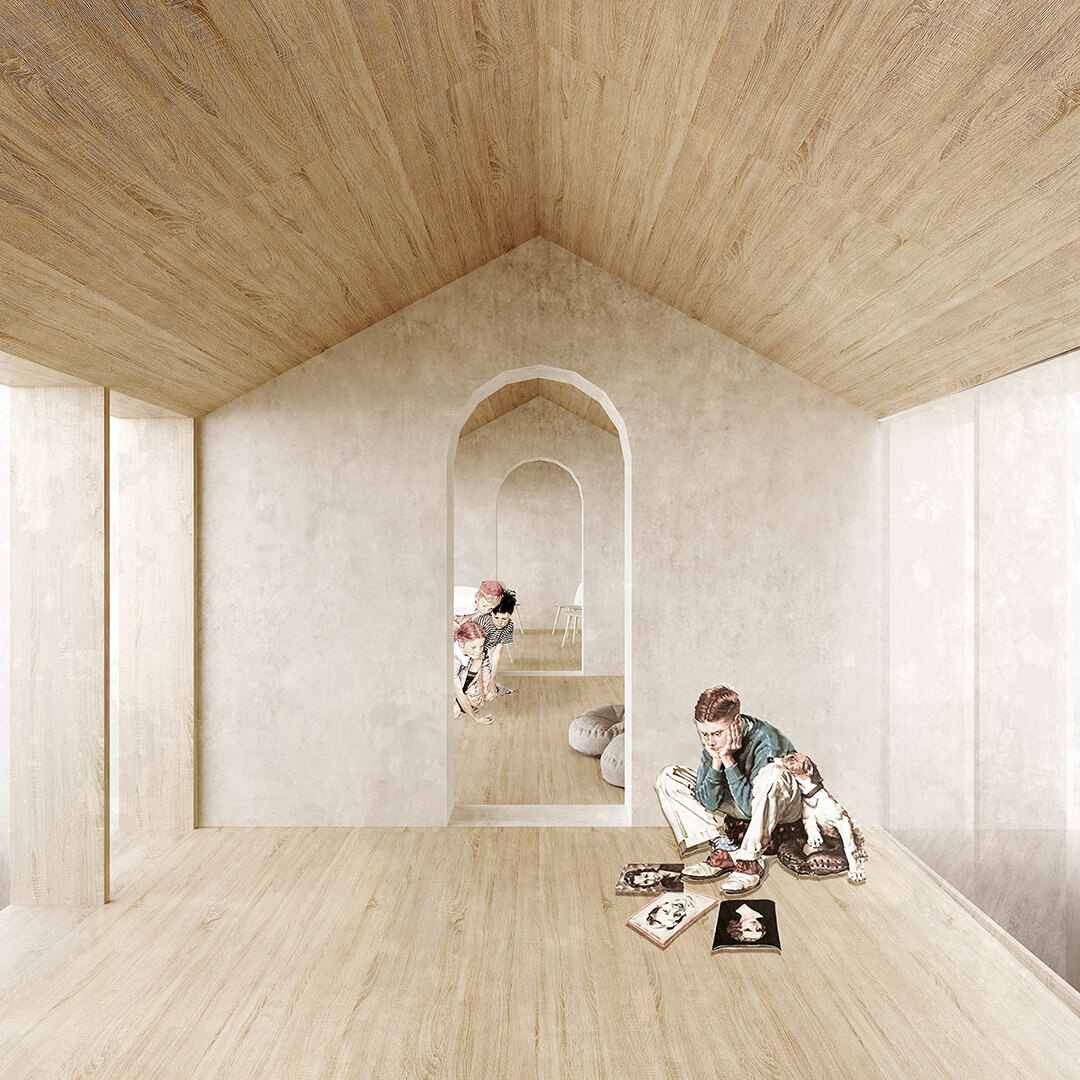 Once this huge space is created, we need to start shaping its smaller and specific areas. In order to maintain the void under the archs, we decided to put these auxiliar spaces to the back so they do not interfere with the main ones. So, all the services -workshops, offices, stairs and bathrooms- are hidden behind a wooden wall that contain all the books for the kids and get light from the ceiling -and also enriching the section-.

This strategy allows us to focus ourselves on the main space, where the library is located, that is developed in two levels. The upper one gets nearer to these structural ribs and the lower one permits a more silent working space, but always visually connected due to double spaces that hierarchizes the void.

This space is near the river -so the kids can see it and let its imagination run free as the water- and gets the light from the main facade -highlighting the ceiling with water reflections-. A huge space surrounded with glass -exterior light- and books -knowledge- that create a mixture of elements perfect to become a library.