Continuation, Preservation and Development – This proposal is based on a consideration of the existing situation of Klosterinsel Rheinau. 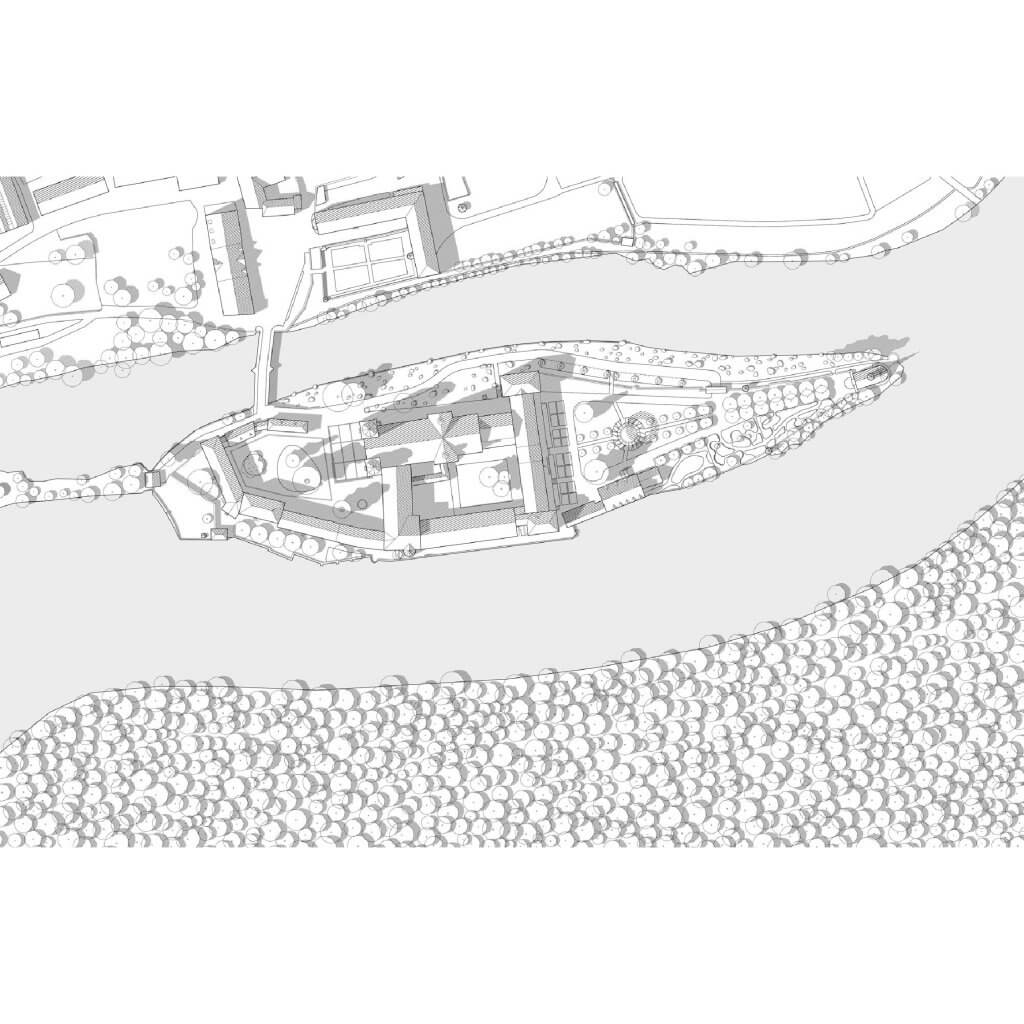 It takes into account the current assets – and avoiding demolition as much as possible, attempts to improve and render appropriate those elements which seem out of accord with the surroundings and history of the place, often by adding additional, mediating layers. It is therefore not a reductive approach and is not a return to any pure, origins of the place, but rather carefully evaluates all artefacts for their inherent energy and contemporary relevance.Garden Rooms, New Extended Routes – The new design concentrates on reinforcing and developing unique characteristics within rooms of the garden – some already loosely suggested – providing a diversity of experience and atmospheres, so as to allow each visitor or resident to find their own place depending on their mood or circumstances. Certain places are defined by clearings under heavy foliage, some shaded by enclosed pergolas, others are open to the sun amidst low bushes and flowers, or next to the low, existing stonewalls – warm from their radiant heat. Paths in general are now arranged or modified to no longer simply end and instead have options to continue back or around along a different route, creating a multitude of potential choreographies.

Pedestrianisation, New Open Space – Starting with the approach over the bridge, new automatically lowering bollards embedded in the path replace the existing hanging chain, to allow for a more inviting, pedestrian, barrier free and bicycle access along the northern shore of the island towards the Spitzgarten. Parking places, along with the birch trees originally shielding them, are all removed from the northern side of the path, leaving the riverbanks completely open down to the Rhein and to the opposite face of Rheinau. Additionally, some parking places near the entrance gate are shifted to the west, allowing for a car-free area around this threshold situation. 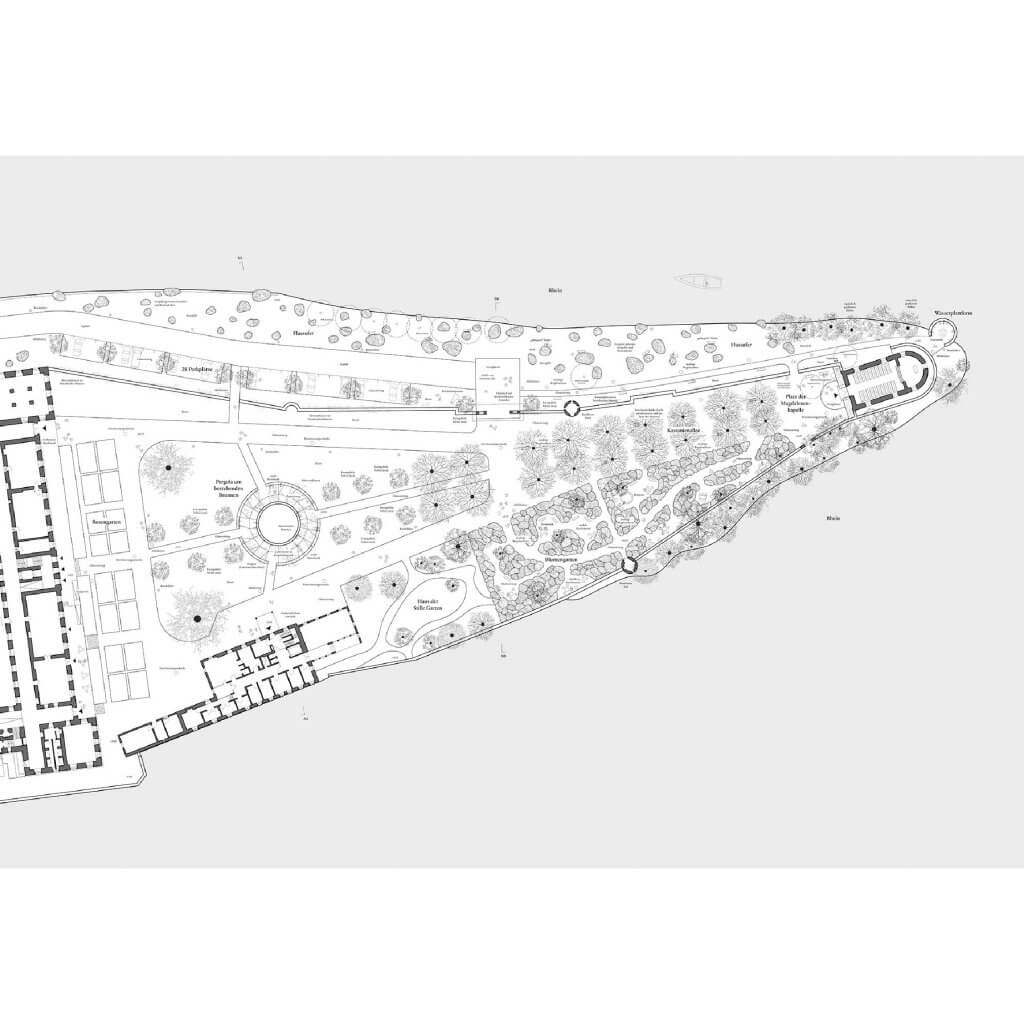 Reconfigured Entrance, Public Invitation – The new, timber roof is added on top of the four, existing gate-columns – viewed from the ground, the roofs’ perceived form opens up and outwards, inviting the public inside. If possible, the iron gates between the columns are proposed to be completely removed. The wooden roof signals the entrance from afar, as a long, horizontal, floating mass, adding a sensitive counterpoint to the nearby adjacent towers, together with it forming a tense, asymmetric composition, and calibrated so as to not be so high to compete with the allée of chestnut trees directly behind it.

Pergola Fountain – The western area of the garden with its charming rose-gardens, abutting the convent is left largely untouched, except for the addition of formally clipped shrubs as well as an arched pergola with a circumferential bench, surrounding the existing fountain. This creates a concentration and density in this area, which was previously lacking, and gives a place of intimacy under the shade of climbing plants, though the space is generously sized so as to allow people to both sit and stroll along the round path without disturbing each other. The pergola would be constructed of thin steel tubular profiles, clipped onto the sides of the fountain bench, allowing the climbing plants to act as the main bodies in defining the space – the structure eventually fading to the background as the plants grow more and more dense. 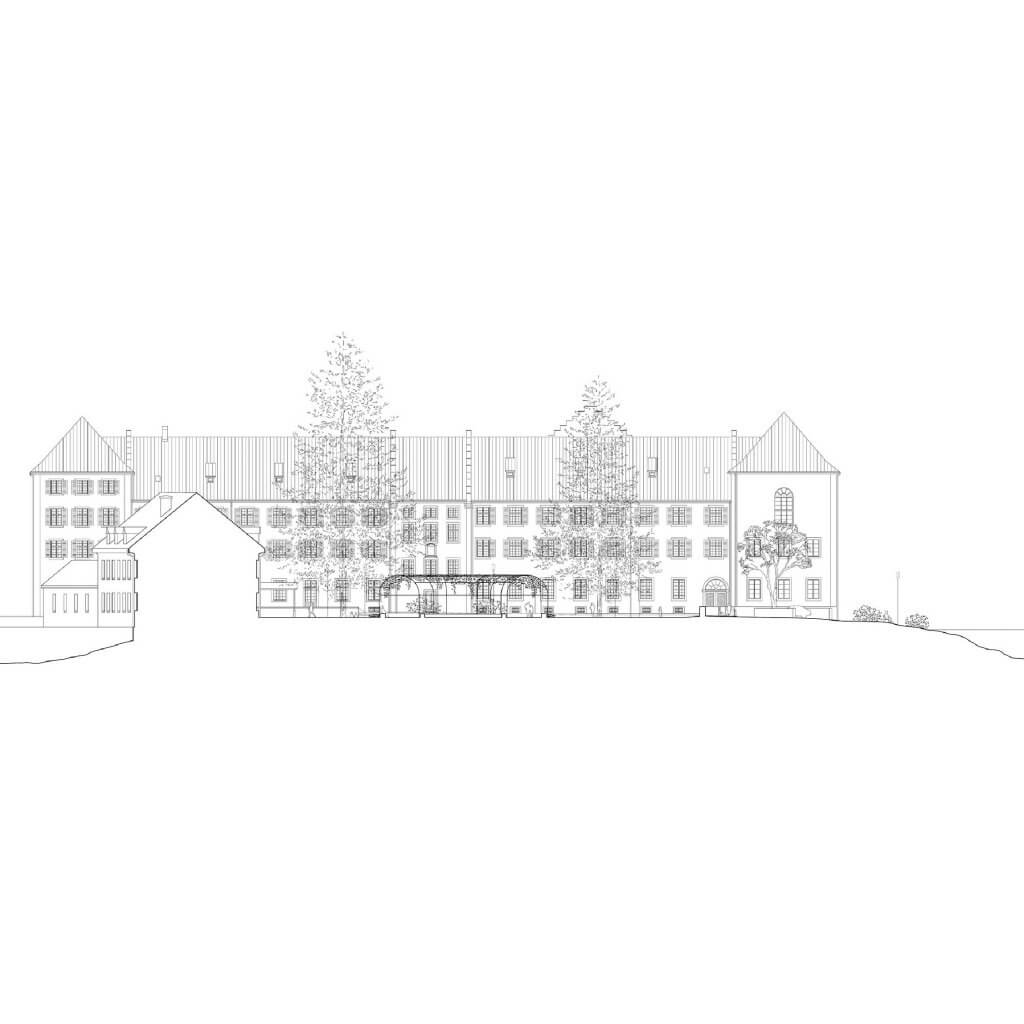 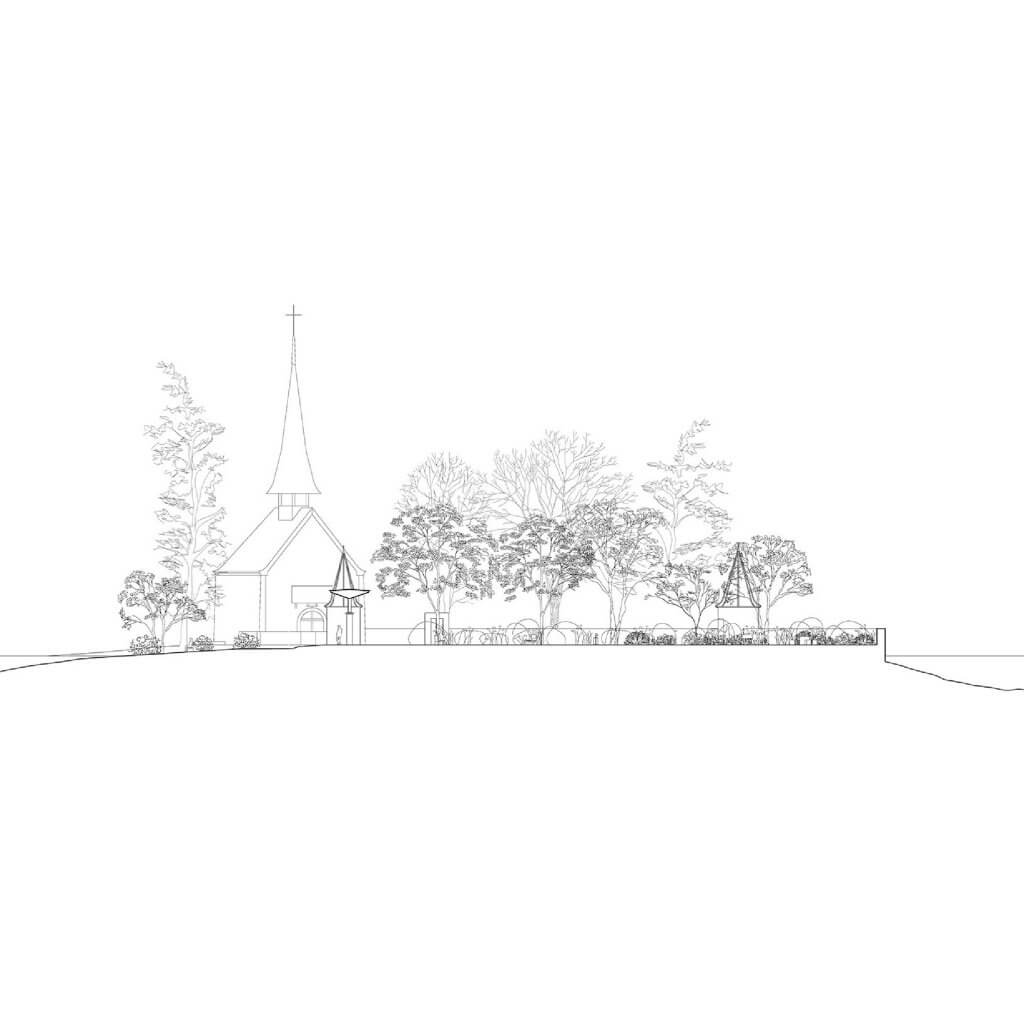 Flower Garden – A long, densely planted field to the south of the chestnut tree allée, continues the baroque spirit of the private garden of the convent and could easily be physically connected together with it in the future. Replacing the grass field, it is exuberantly filled with wild bushes, shrubs and perennials of various heights, and arranged to form voids and niches off of a main, curving path, for people to sit in for rejuvenation or contemplation. Here, the selection of plants is multi-layered and ecologically rich to attract birds, butterflies and wild bees. In one of the larger niches, a small fountain quietly babbles, creating calming and neutralising sounds. The furniture within the voids is mixed – some benches are massive and fixed, while in other places, mobile, light-weight chairs and tables provide situations for calm talks and meetings. The southern tower along the stone wall finds a new life then as a stoic folly amongst the softly swaying flowerbeds.

Chestnut tree allée adjustments – The allée of chestnut trees is subtly improved by replanting the missing trees within the series. The existing benches are re-situated – set slightly back and to the sides of the trunks, thereby widening both the space (for large activities such as weddings) of the path and the distance between respective benches and their vis-à-vis relationship. 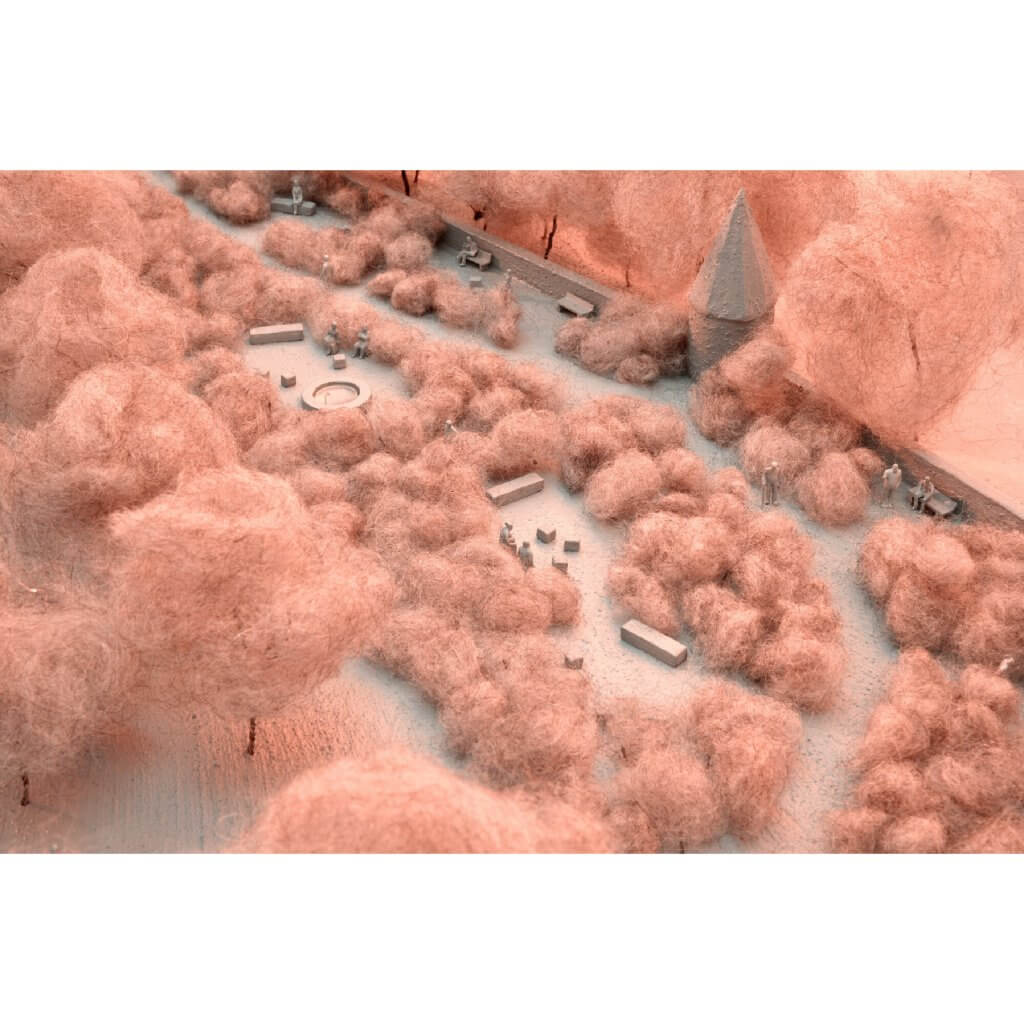 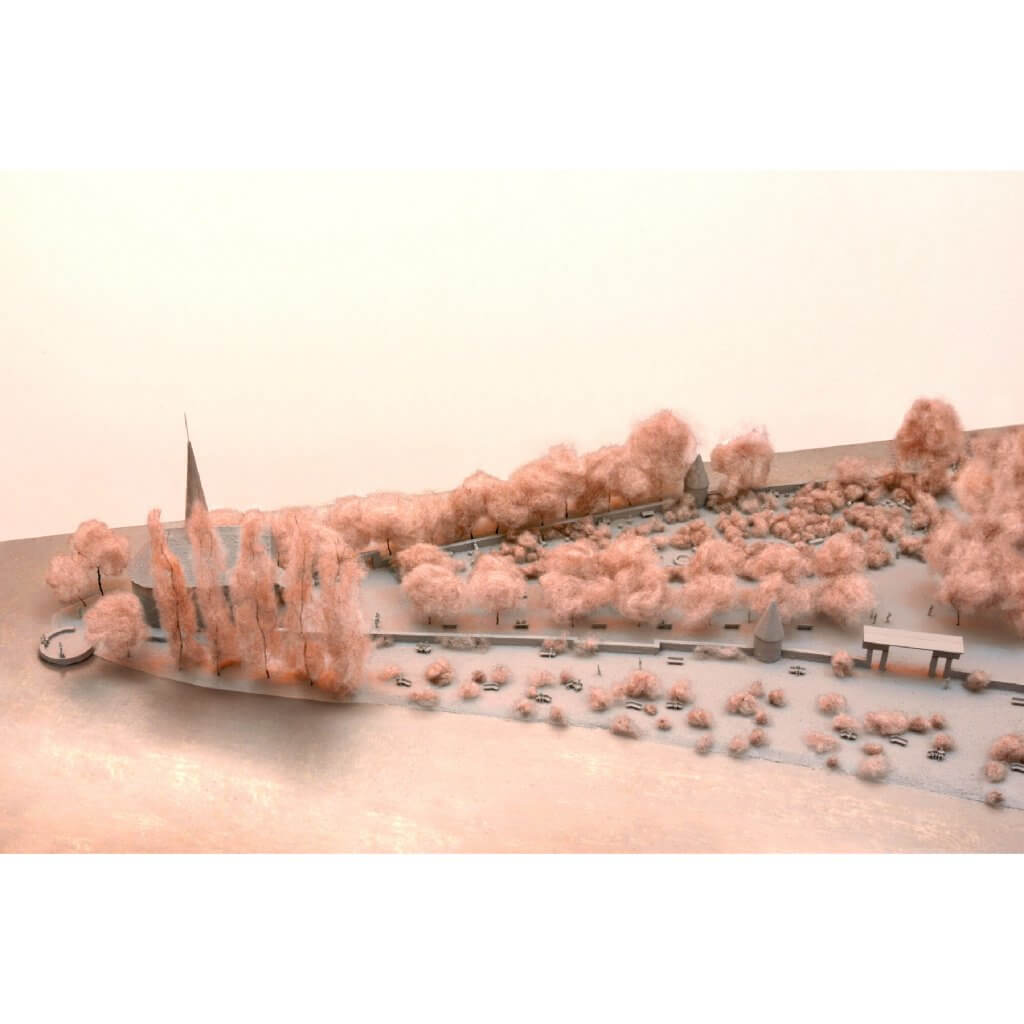 Trees: Strategic Clearing and New Planting – The square in front of the Magdalena chapel is cleared up by the removal of the lone, tall poplar to the left of the doorway, leaving appropriately generous space for events and rendering the facade free as a high, sun-washed bright end to the lower, dark shady character of the chestnut tree allée. Additional birches are planted along the northern side of the chapel as a parallel, space-defining screen and thereby also creates a homogenous light condition of fluttering leaves through its’ side windows.

New connections, Alternative routes – A small, new opening is cut out of the northern wall adjacent to the Magdalena chapel square, allowing for the possibility of a shortcut to walk out, down to the river or to the rear of the chapel.

Water Platform – At the end of the path to the east side of the island, a small, concrete, round platform is proposed with a bench at its edges and a sunken fire-pit for warmth in autumn or spring, providing a place to sit, out over the water, gazing back up at the chapel. Small groups could gather around in this circle, under the adjacent overhanging tree, for informal meetings, gatherings, or workshops. 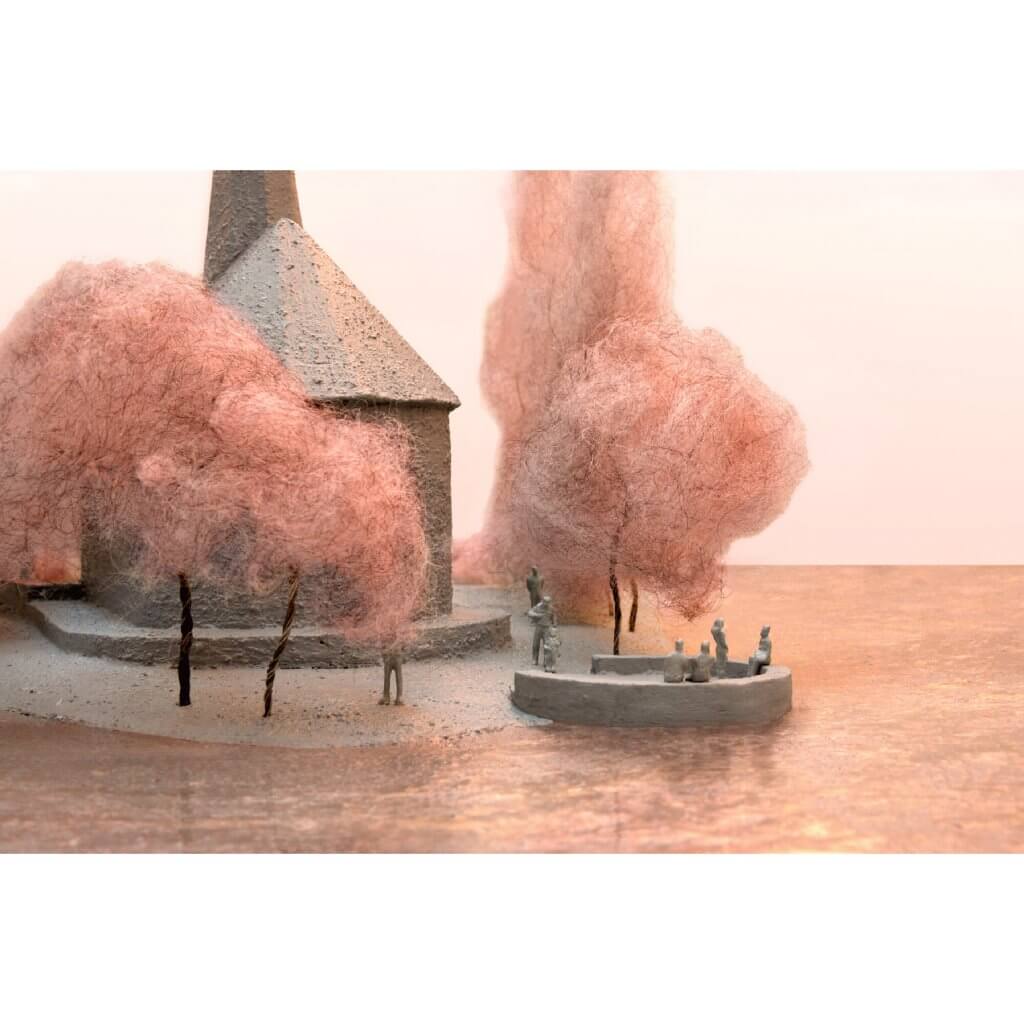 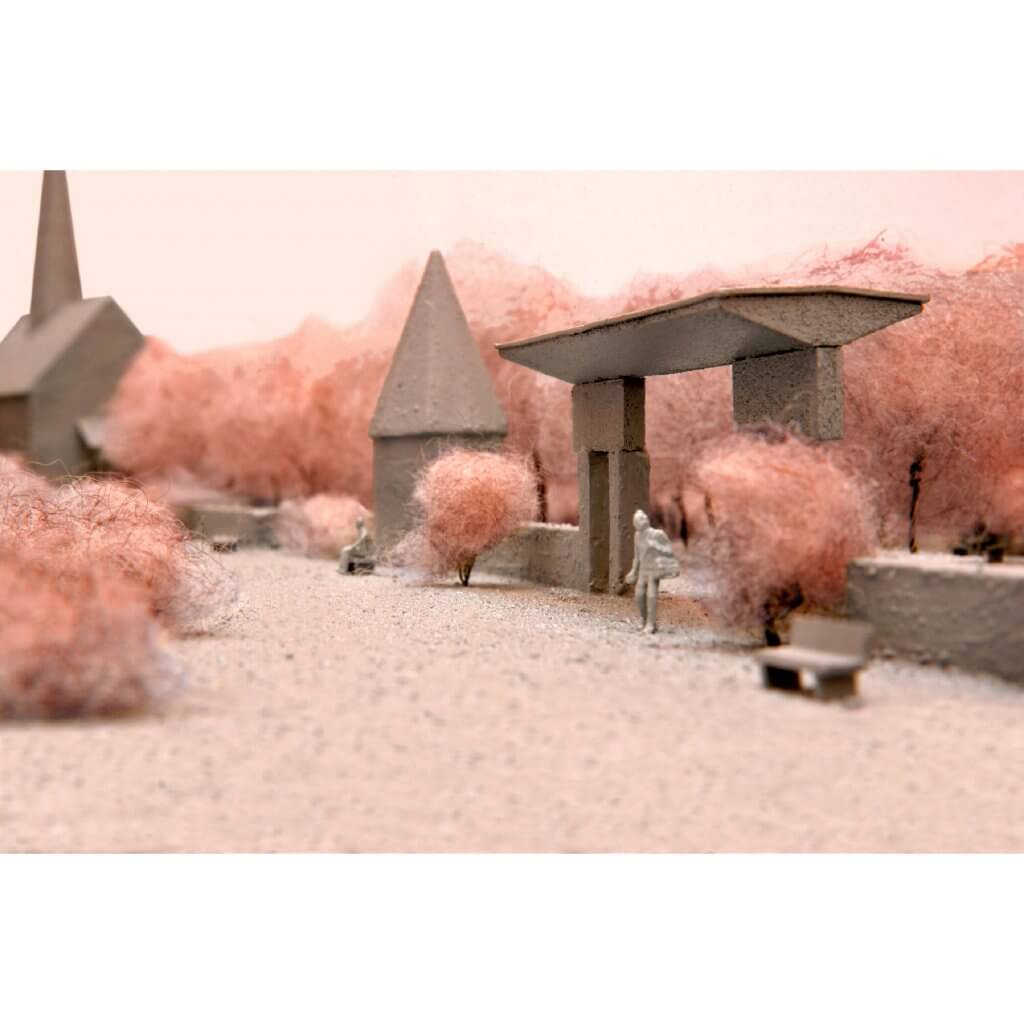 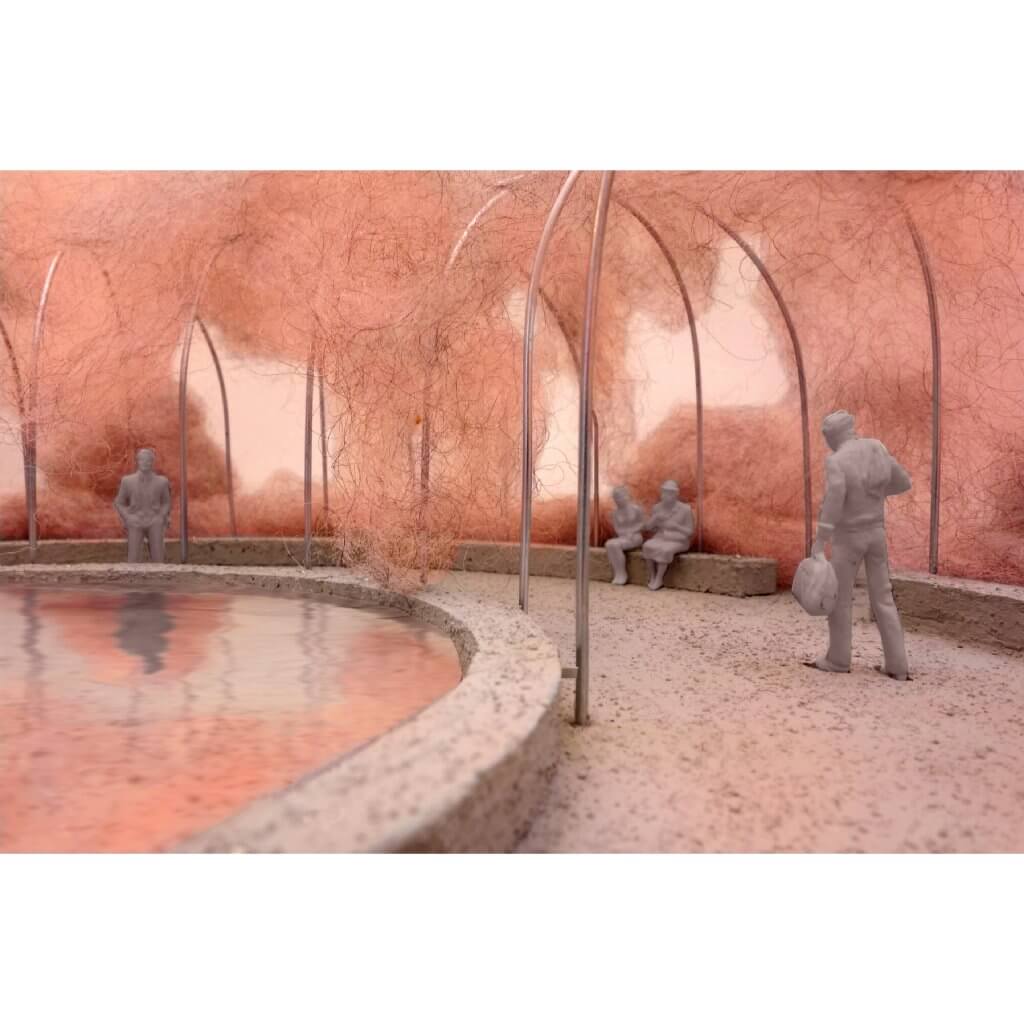 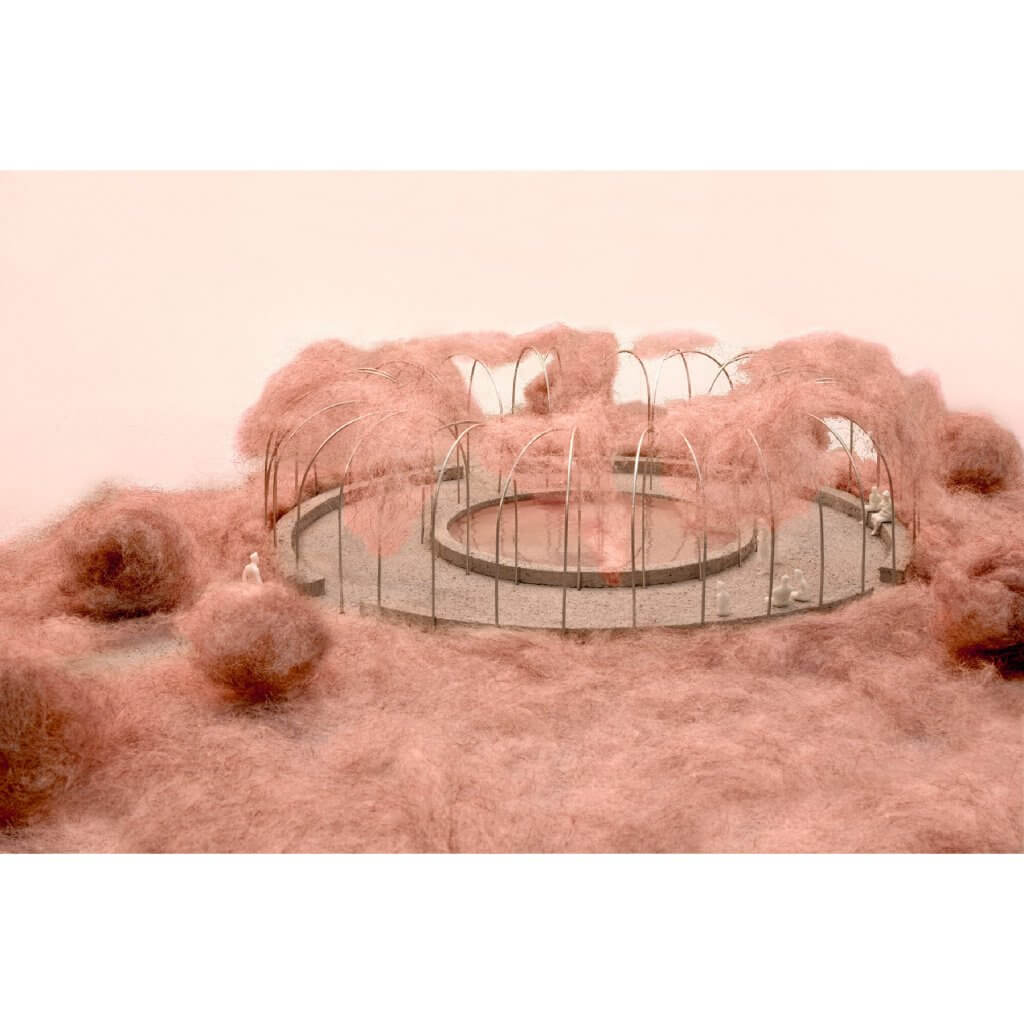 Riverbank – Along the continuous, northern riverbank, shrubs, clumps of ground-cover, and benches are arranged loosely in a field of grass, appearing as if they have washed ashore in this manner. The benches in the grassy area are specifically bent, recalling boats, and are so formed to give people sitting side-by-side subtle views of each other. Walking along the new loose gravel path, the irregularly-shaped low- to medium-sized shrubs and ground cover provide a foreground accent before the river, subtly breaking up and opening the extended view in a loose and playful, wavelike rhythm.