From the strategies of the OASIS, and the archetypes of the SOUK and SAHN, a hybrid system is developed, both user-focused and environmentally sustainable. 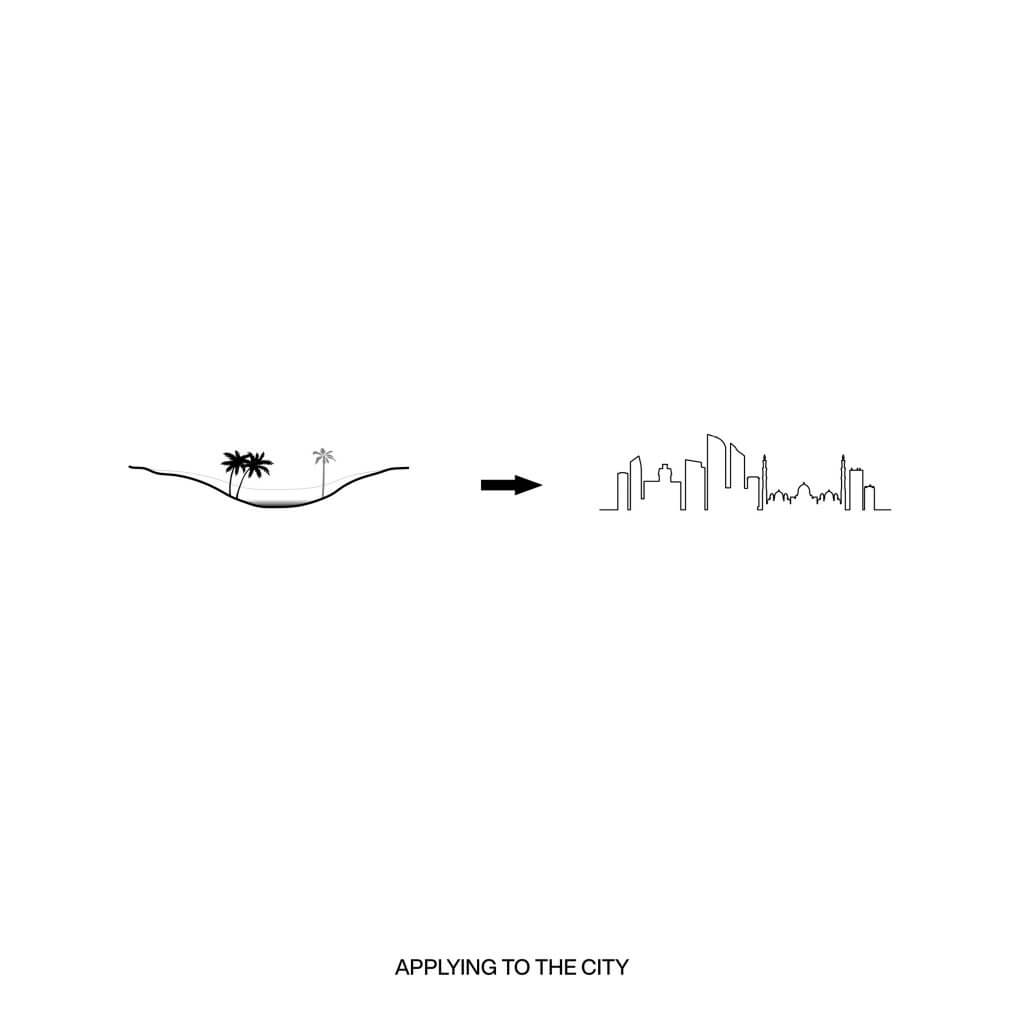 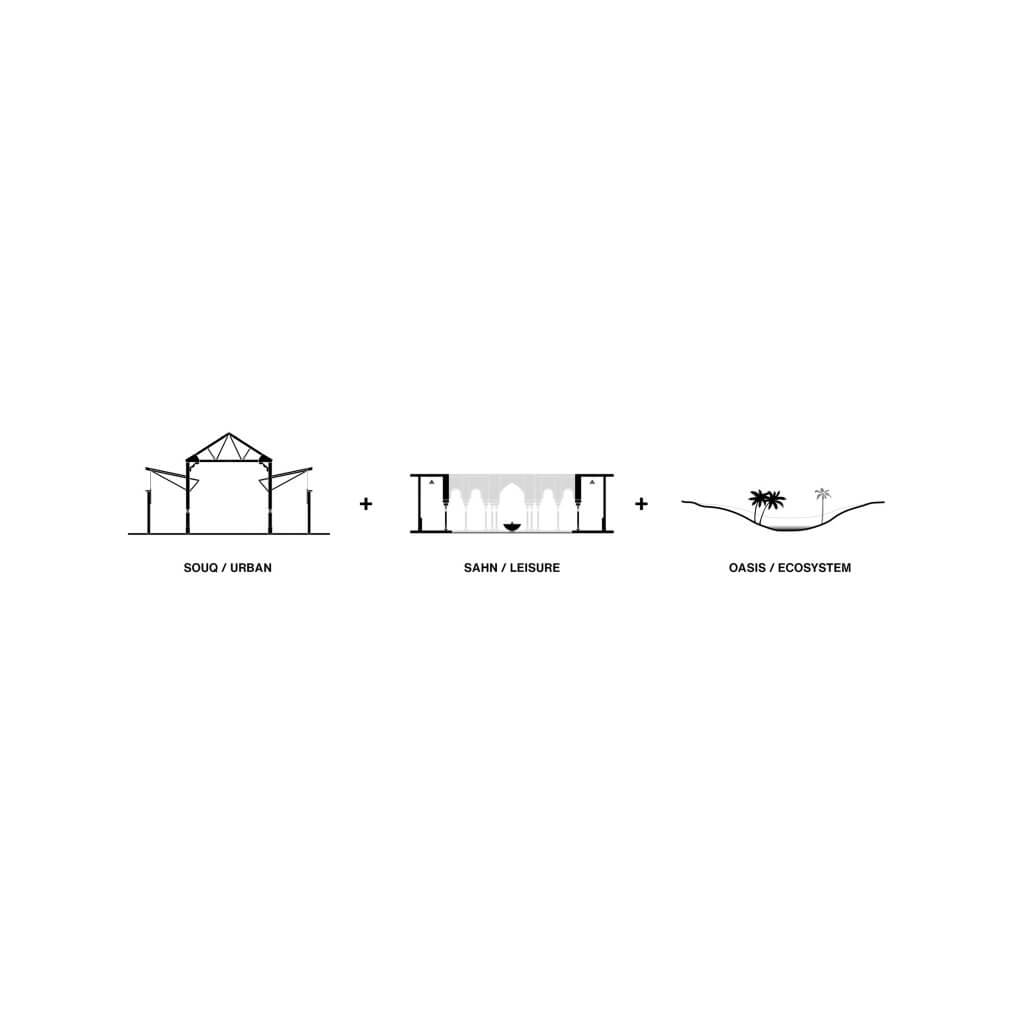 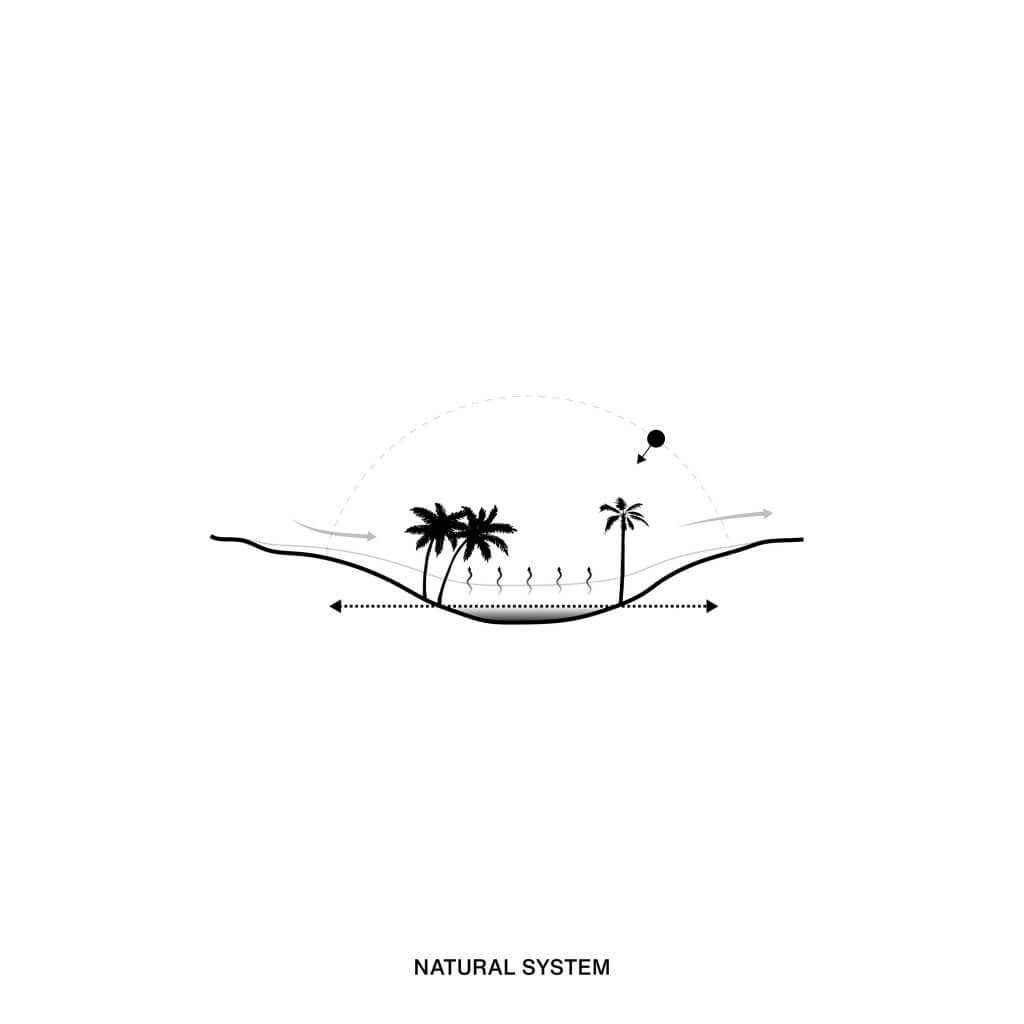 Human settlements in areas with harsh weather conditions have faced many challenges in creating habitable spaces, leading to the development of certain strategies throughout history to cope with these conditions. Despite the fact that cultural, constructive, and technological advances have been the main culprits when addressing these situations, the resultant always refers to natural systems. In desert environments, one of the natural responses to weather adaptation is the formation of the oasis, which creates several microclimates within allowing for habitability. 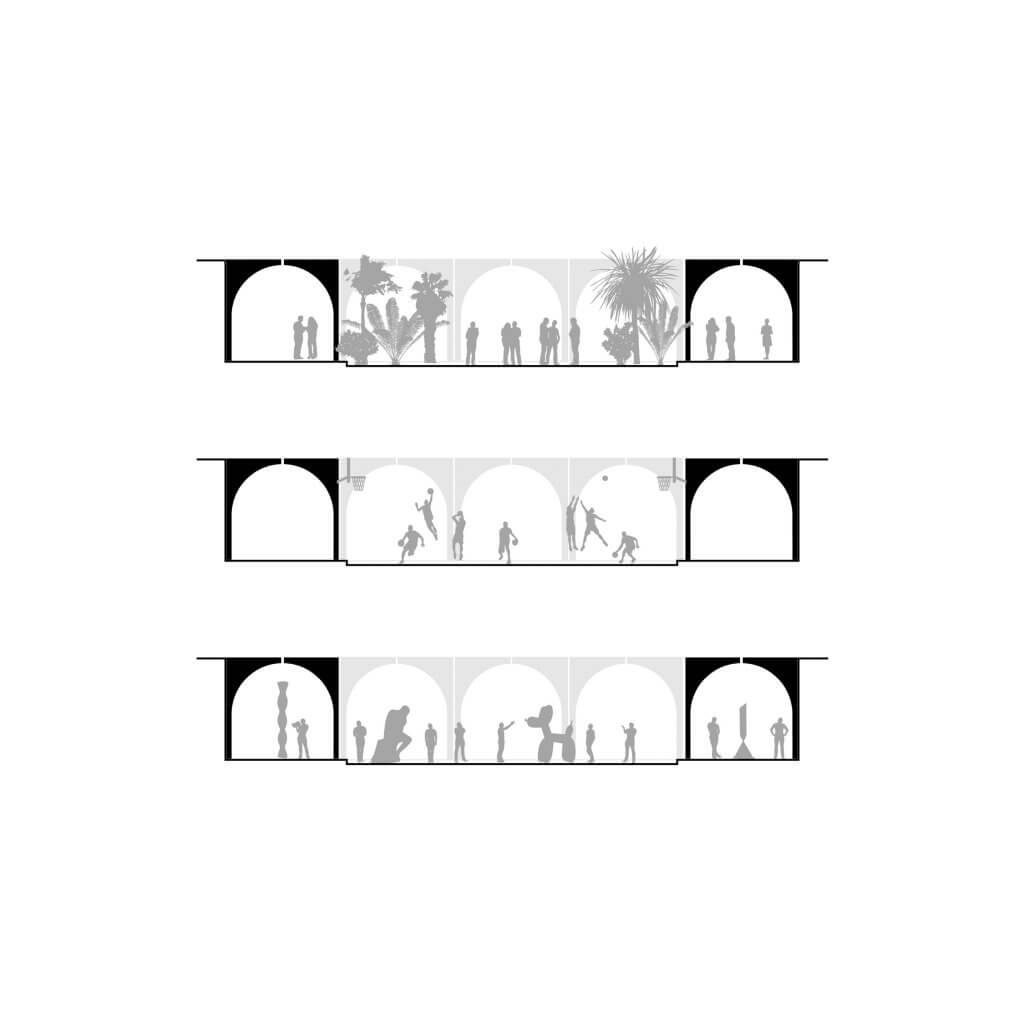 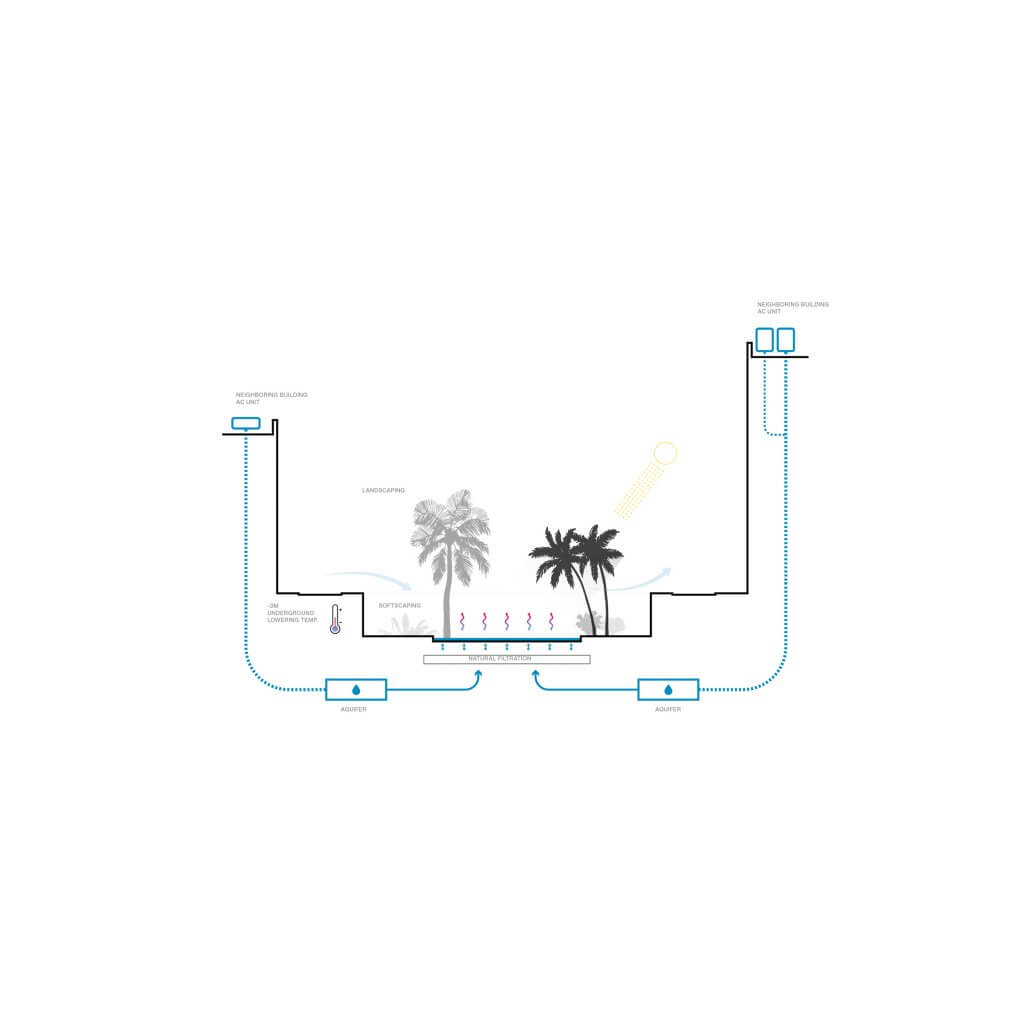 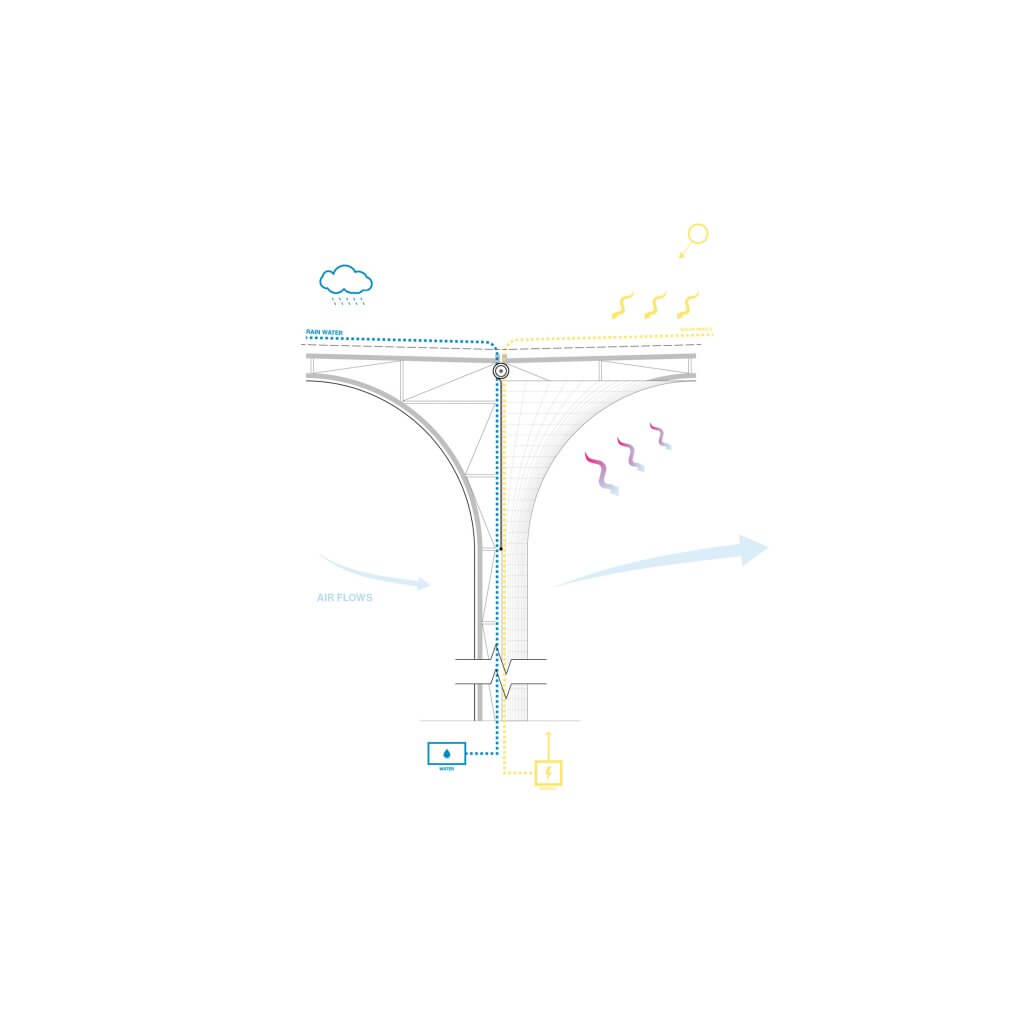 Originally, an oasis is formed due to natural situations that result in the development of a system, creating a unique ecosystem compared to its environment. When this system was adopted by humans, its development was inhabited and used deliberately on building settlements, development, and cultivation in areas previously thought unimaginable. Although the city conditions are not the same as in the desert, an urban cooling system based on these oases would allow the creation of a microclimate efficient enough to adapt the conditions of the place to a more comfortable one. However, this system would not be sufficient to support the programmatic needs of current urban life, because public space is not only an area with a comfortable temperature but rather a support for the meeting, development, and collective experiences. 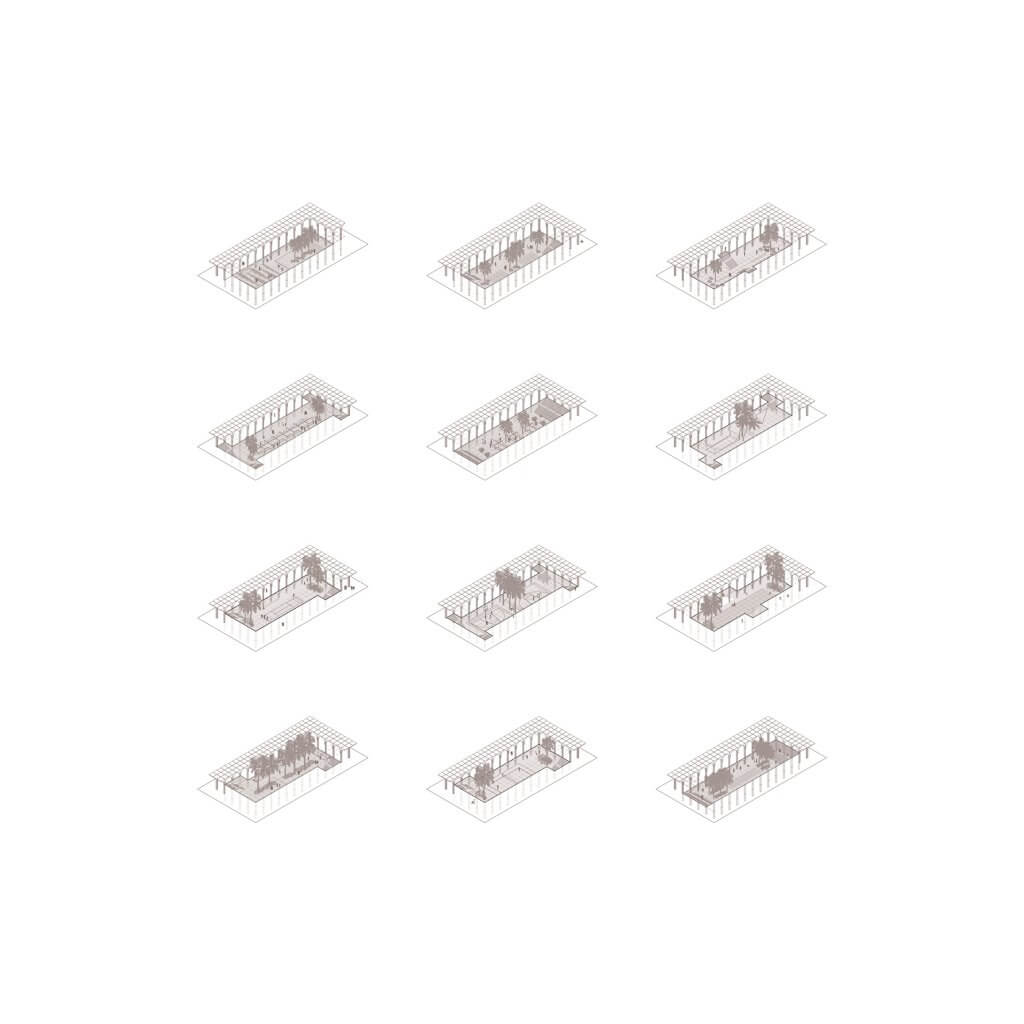 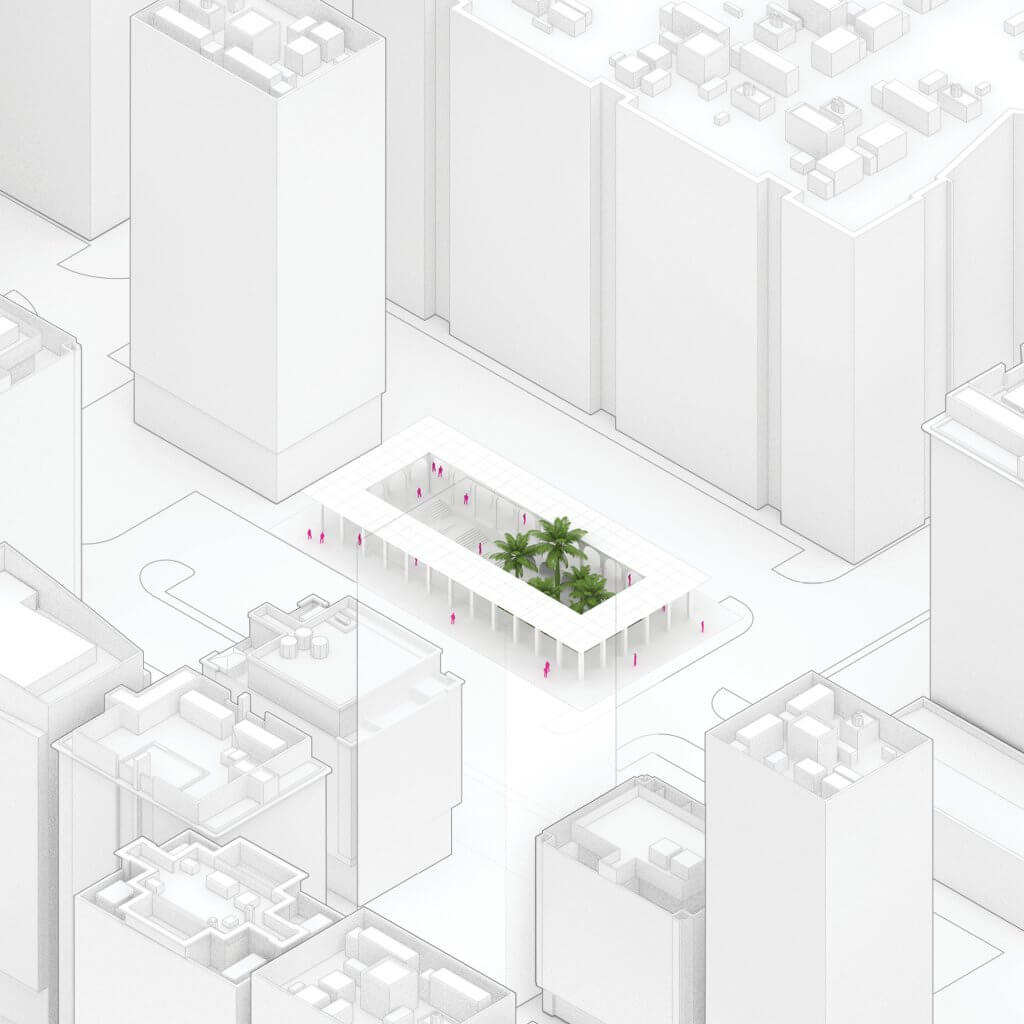 Local references for this urban situation can be found in the SOUQ, or SAHN, both enabling the support of different activities. The SOUQ can be detected as urban flow support, which generate, through a corridor, spaces for commerce through a shaded modular structure. The SAHN, on the other hand, are living spaces, allowing contemplation, human activities and interaction, and can reflect the religion. Both typologies respond to the need for collective space, in different forms and times. This can be considered an archetype, as methodological from the strategic point of view to resolve collective support in the city. 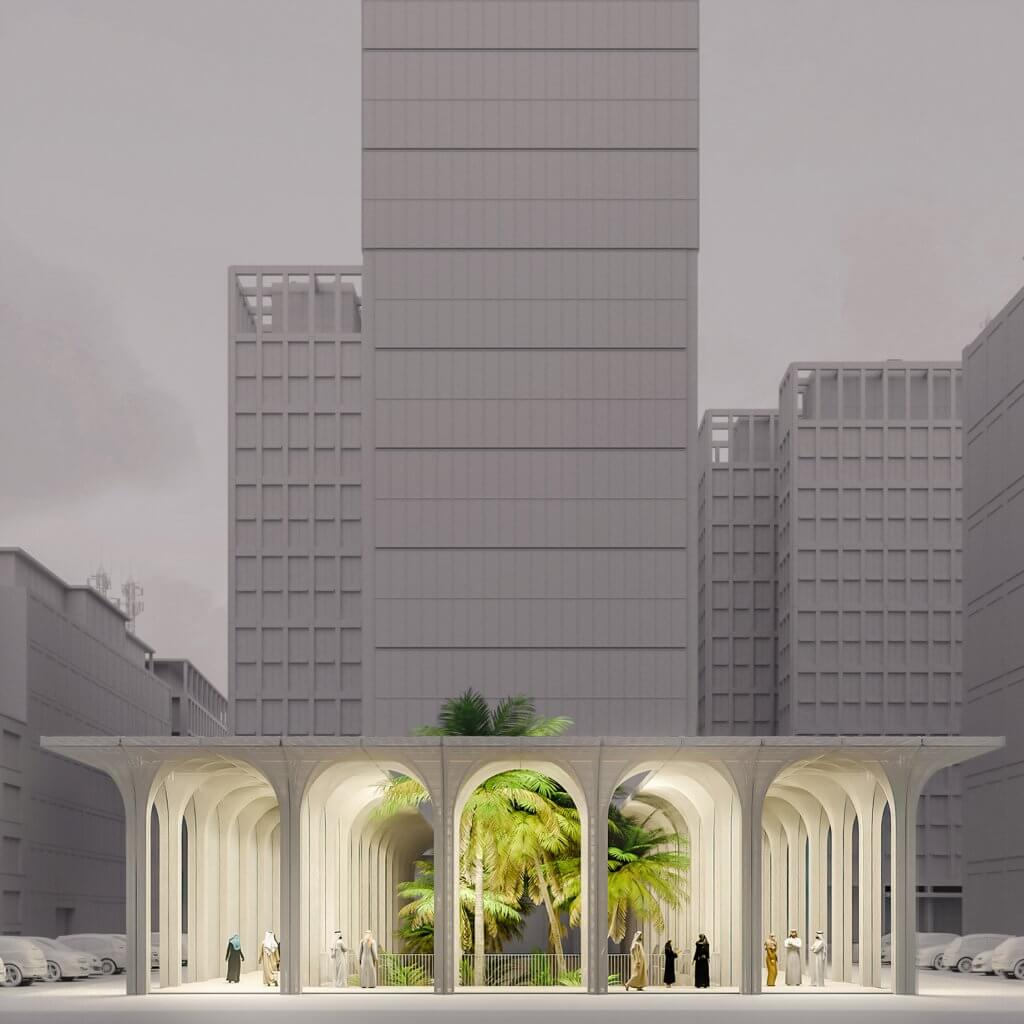 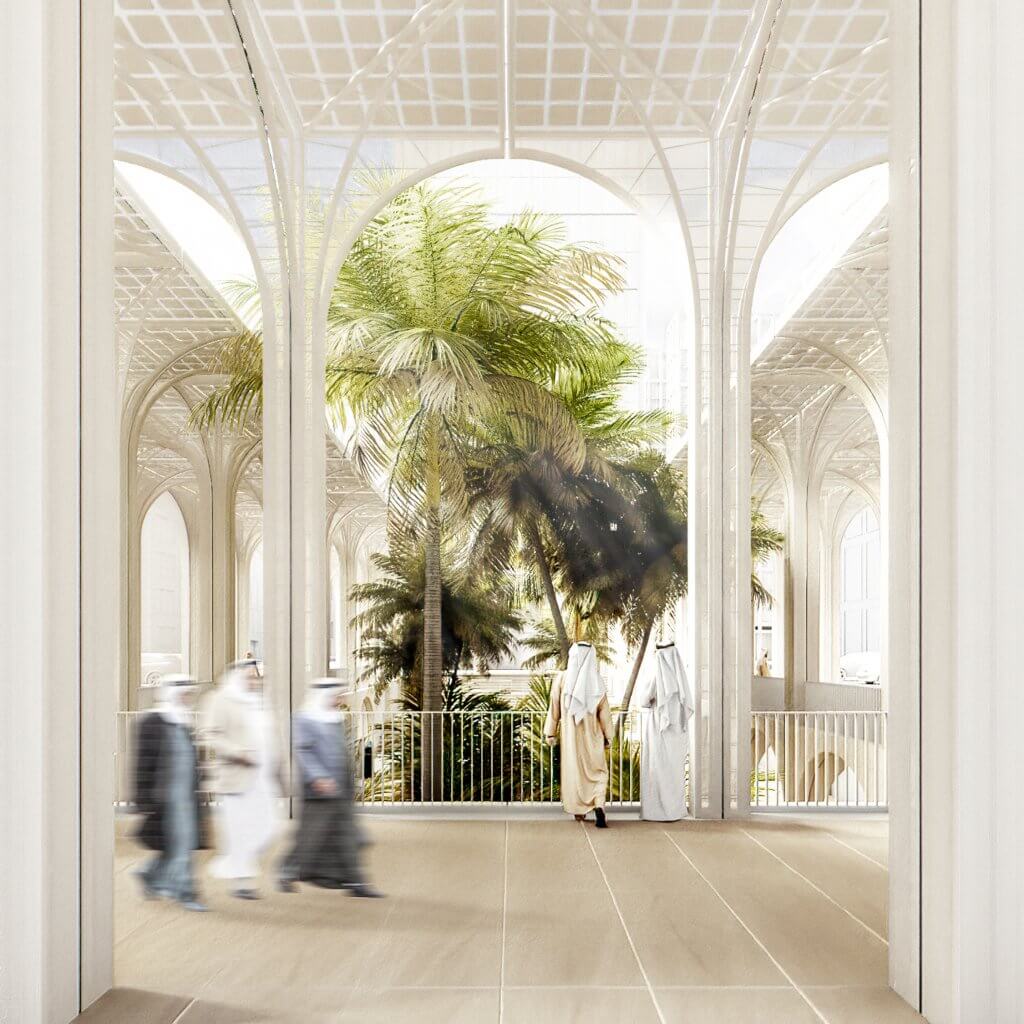 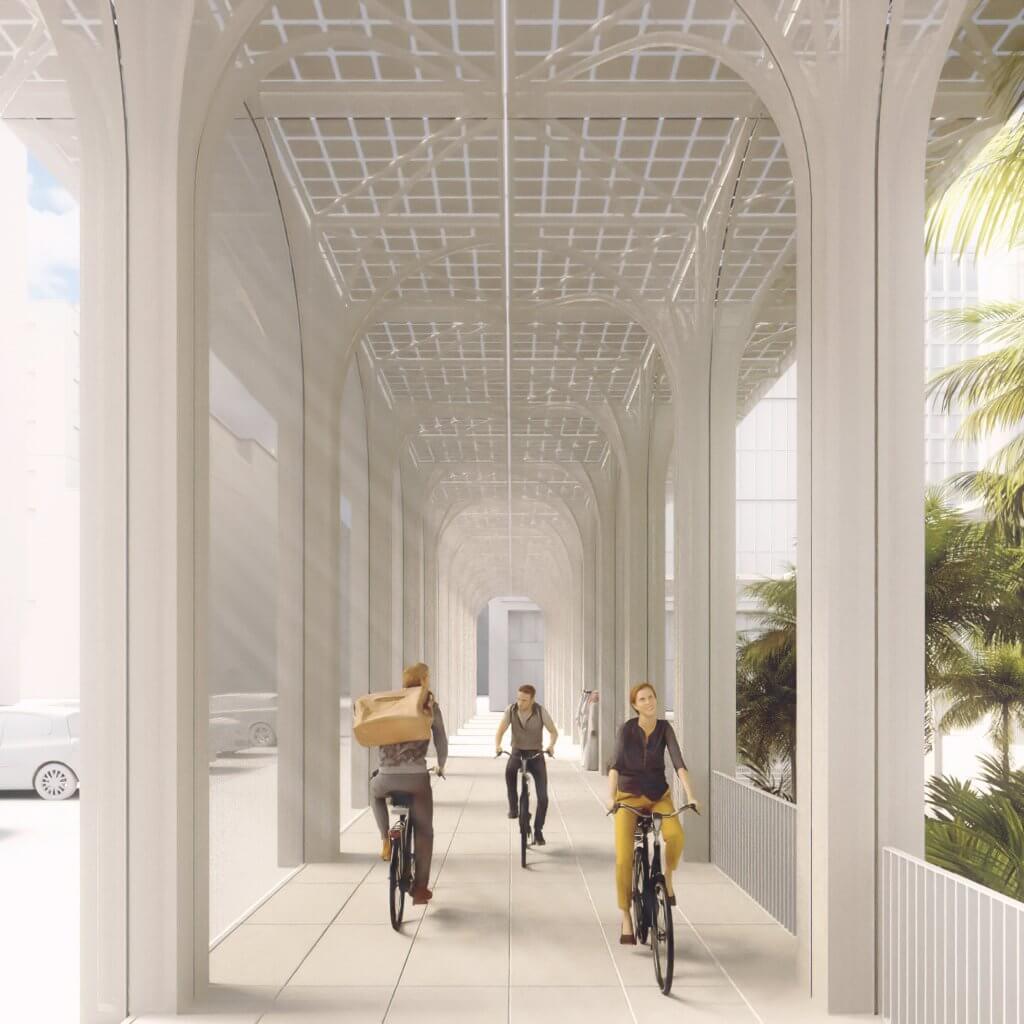 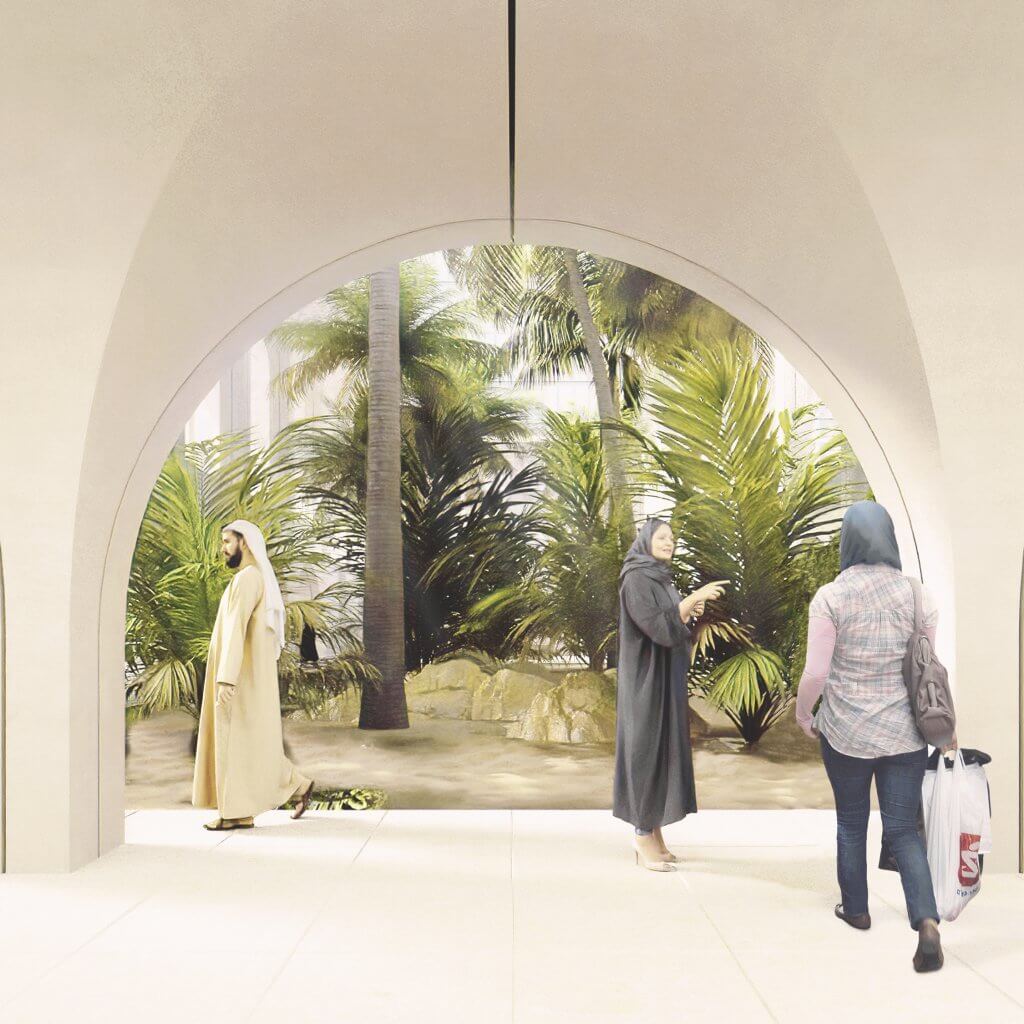 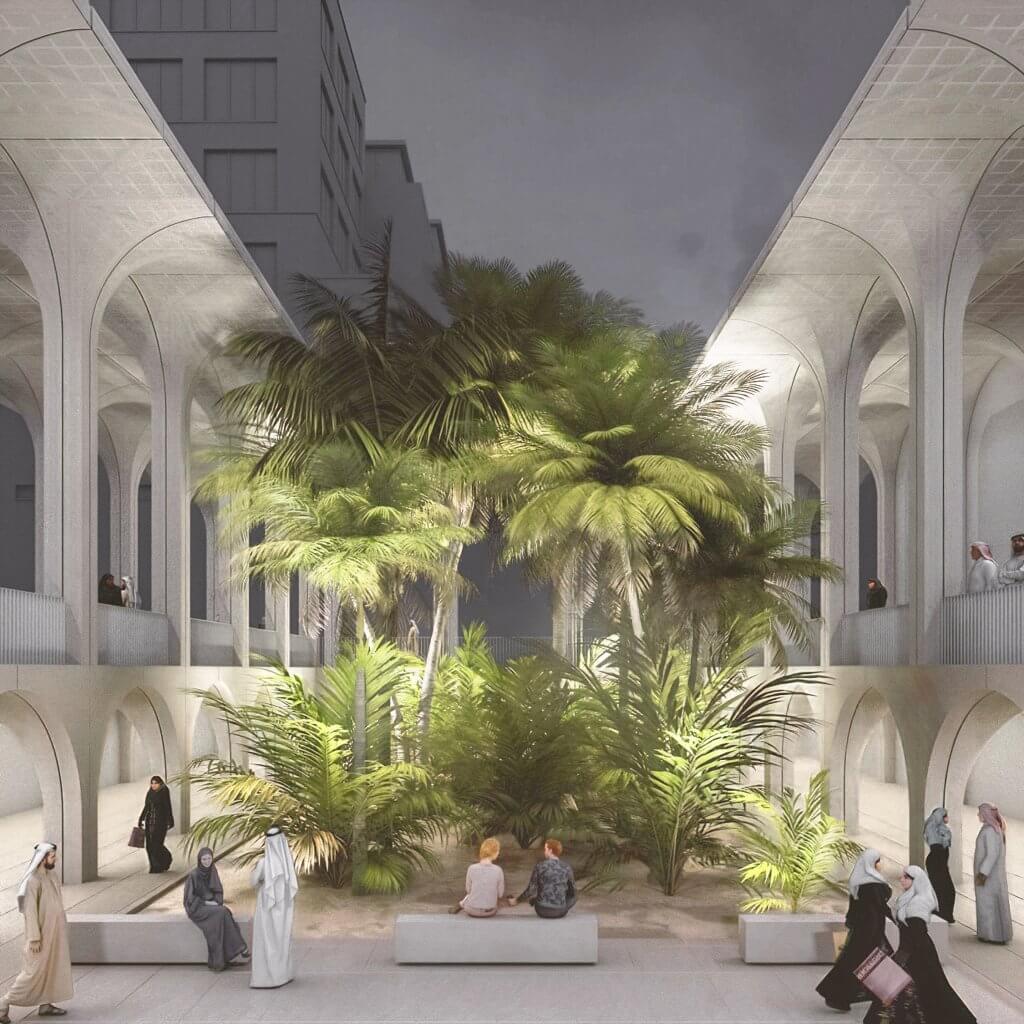 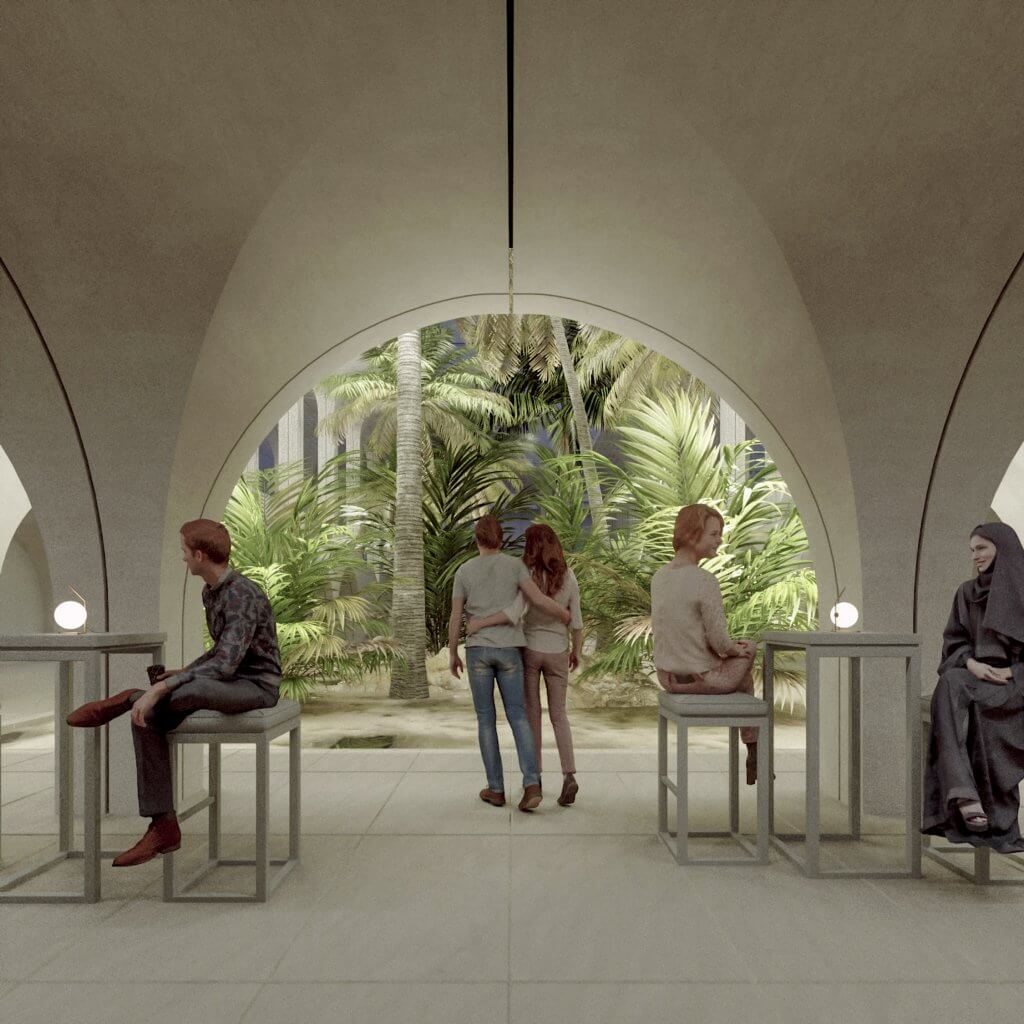 From the strategies of the OASIS, and the archetypes of the SOUK and SAHN, a hybrid system is developed, both user-focused and environmentally sustainable. Firstly, from the OASIS we form ecosystems, as we mimic the cooling systems of shade using vegetation and the natural formation of descending underground in search for cooler grounds. In addition, we are inspired by the collection of water bodies which we translate into water conservation by collecting wastewater from nearby AC units for landscaping, and collect moisture from the humidity in air by adapting screens, releasing cool air into the dwelling spaces. Secondly, from the SOUK strategies, based on the use of a single module activated through repetition, we develop a modular system forming a passageway for wind and a shade structure, creating a comfortable urban space. Lastly, from the SAHN, we create a space for leisure, allowing for an adaptive programmatic system, and housing the urban activities as it focuses on user and activity. The architectural form allows for passive cooling pulling in air to dwelling spaces. Thus, systems combined, we aim to create a cool, comfortable environment through a vibrant public space within the city.