Between the late 1980s and early 1990s, hundreds of thousands of people left Somalia because of a growingly unstable political situation. A significant portion of them moved to Eastleigh and brought major demographic and economic changes to the city, thus turning Nairobi’s Little Mogadishu into an Islamic business hub that to this day attracts buyers and investors from all over the world. 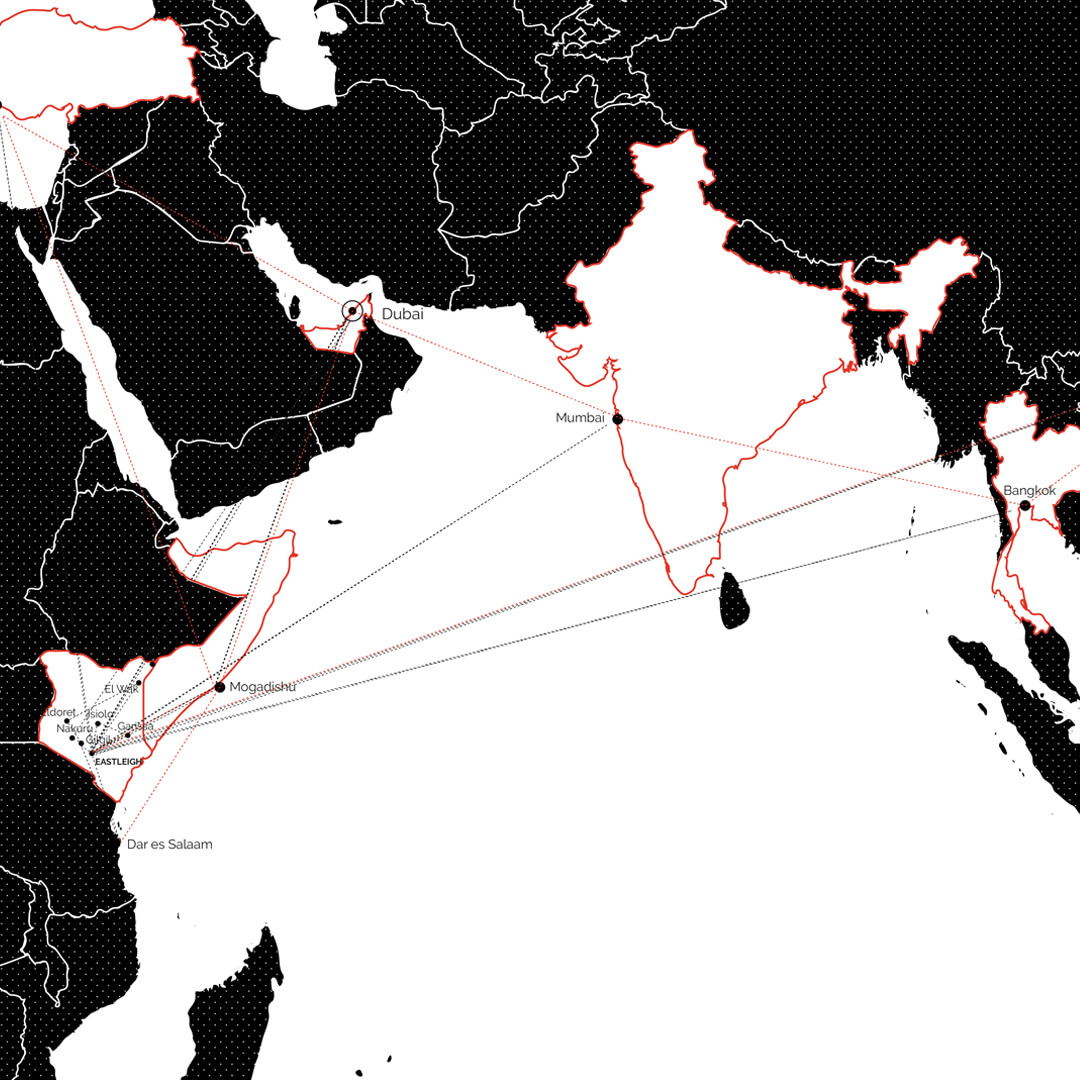 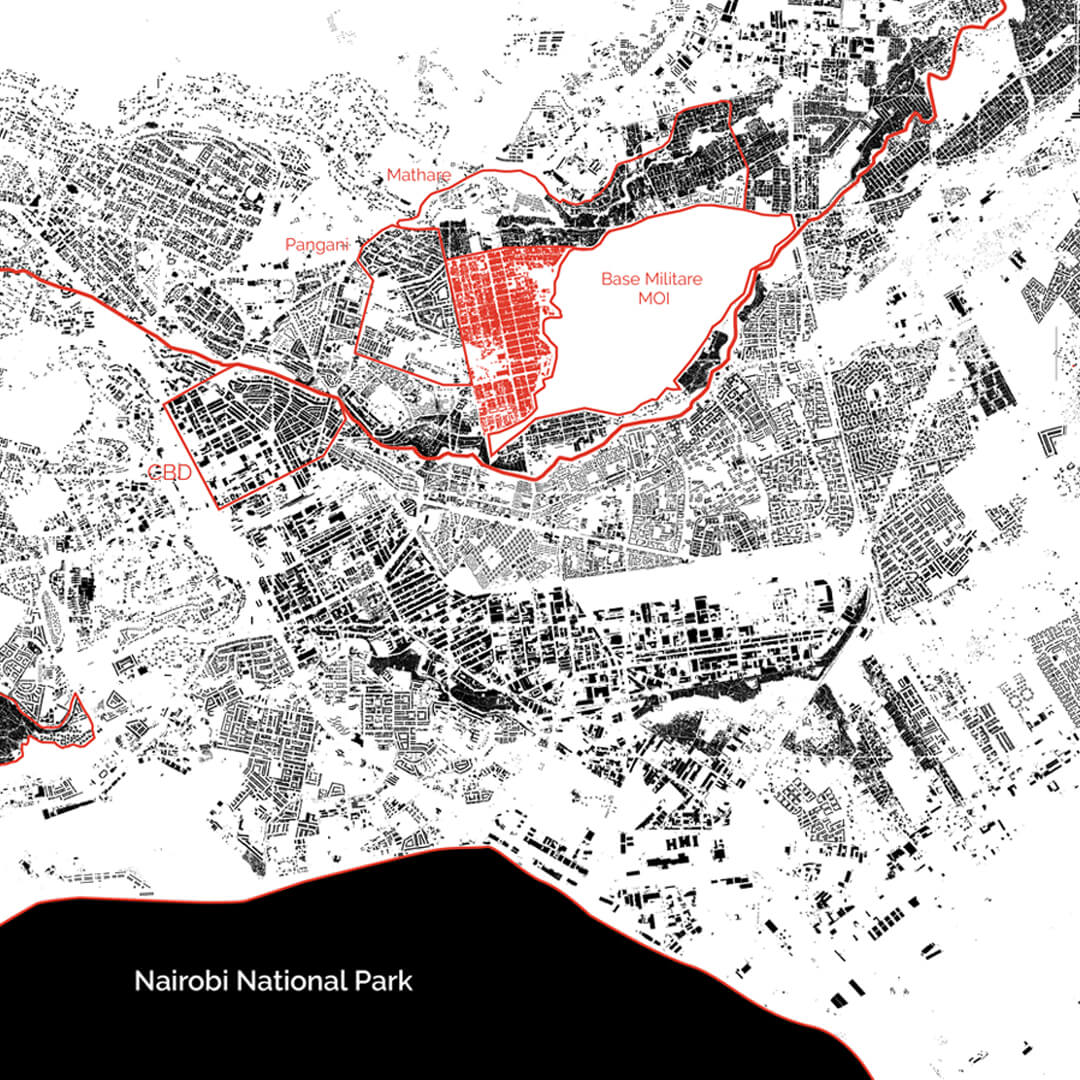 The overcrowded district hosts about 200,000 inhabitants and is teeming with small shops, shopping malls and informal street side markets. It is one of the most dynamic urban spaces in the world and it offers a new perspective on how migration and mobility are shaping and transforming the world of the 21st century. Somalis have adapted the area to their needs, altering the existing urban landscape: the original one-storey dwellings (Asian house type) have been replaced by shopping centres and residential buildings, occupying all the available space at the expense of public space. All the shopping activities, both formal and informal, are located close to the streets, with a very high concentration on the main thoroughfare, First Avenue, which cuts the neighborhood in two and connects it to the rest of the city. Car traffic, markets and pedestrians mix and collide, creating traffic jams and endangering the safety of the inhabitants. 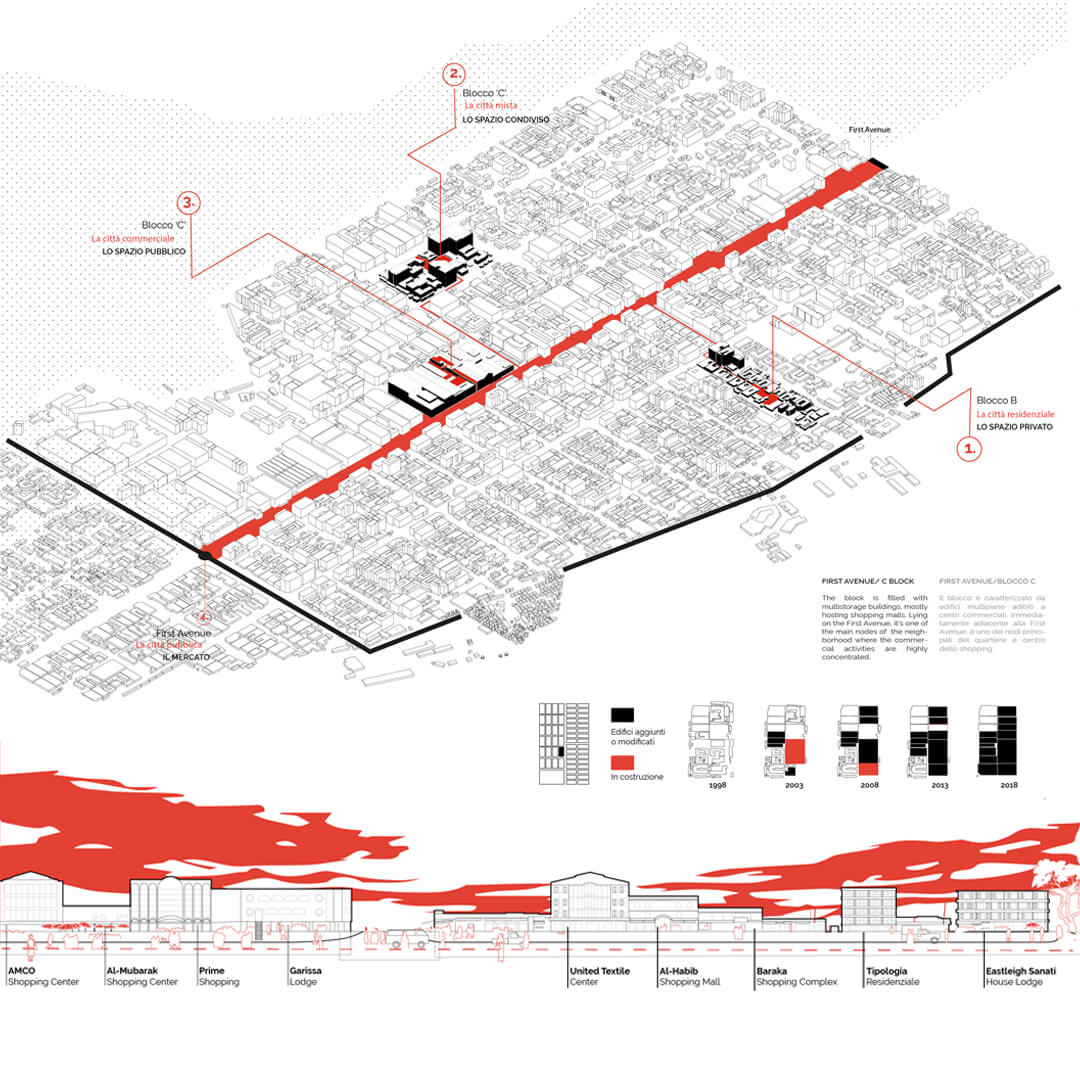 Three main urban blocks have been analyzed and a different design strategy has been applied to each of them. The first one is entirely covered by multi-storey buildings that are mostly shops, the second one is a mix of existing and newly built constructions, while the last hosts the Asian houses only. 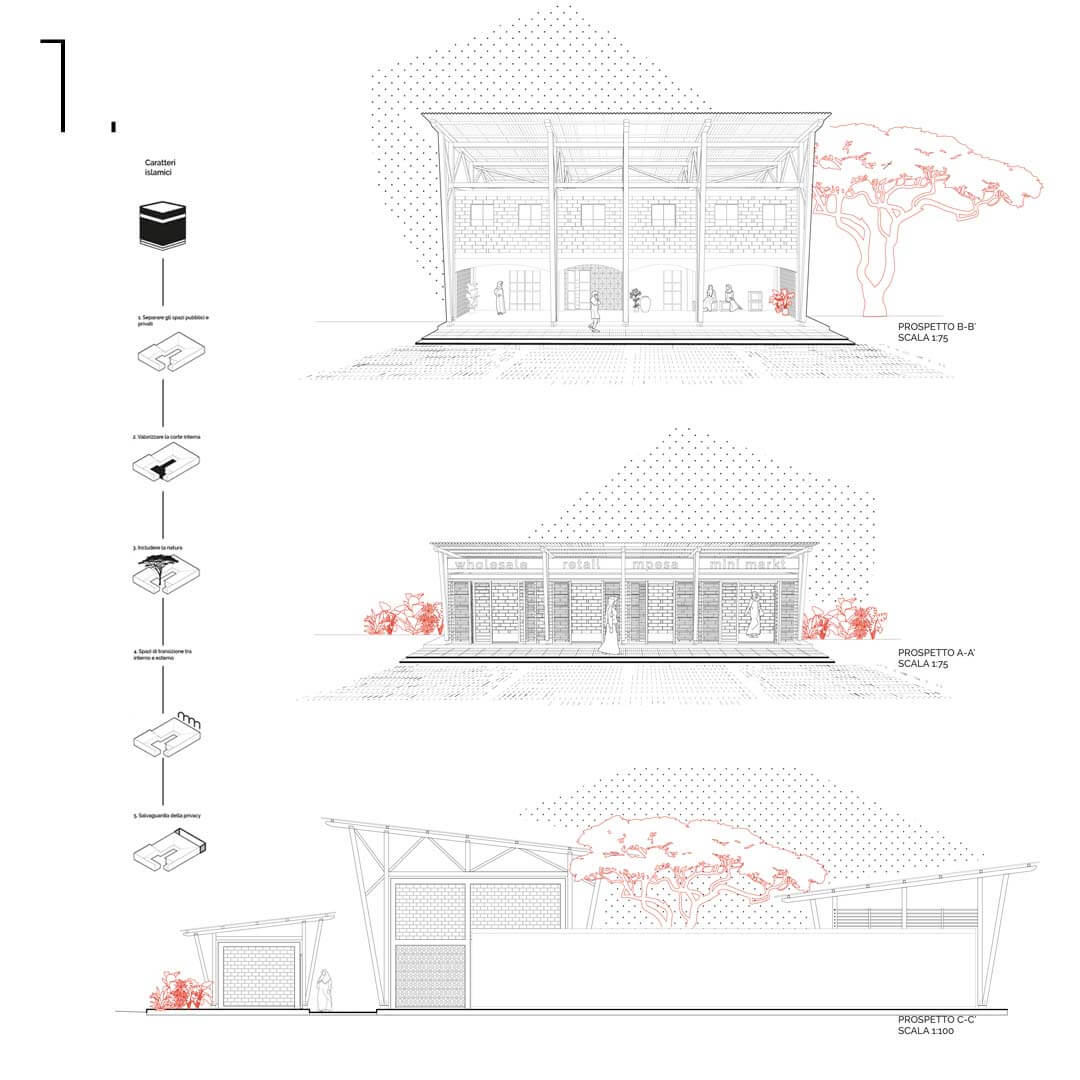 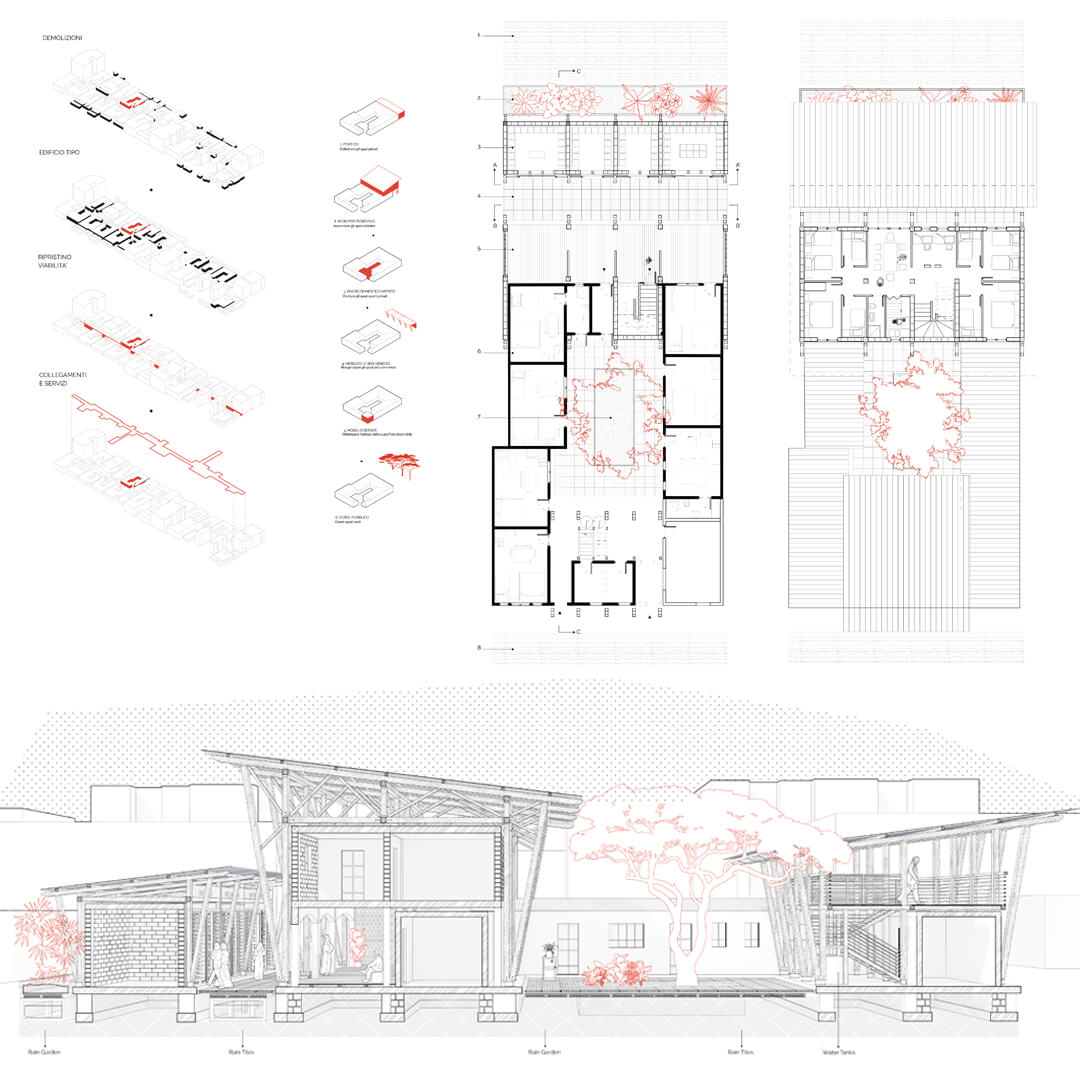 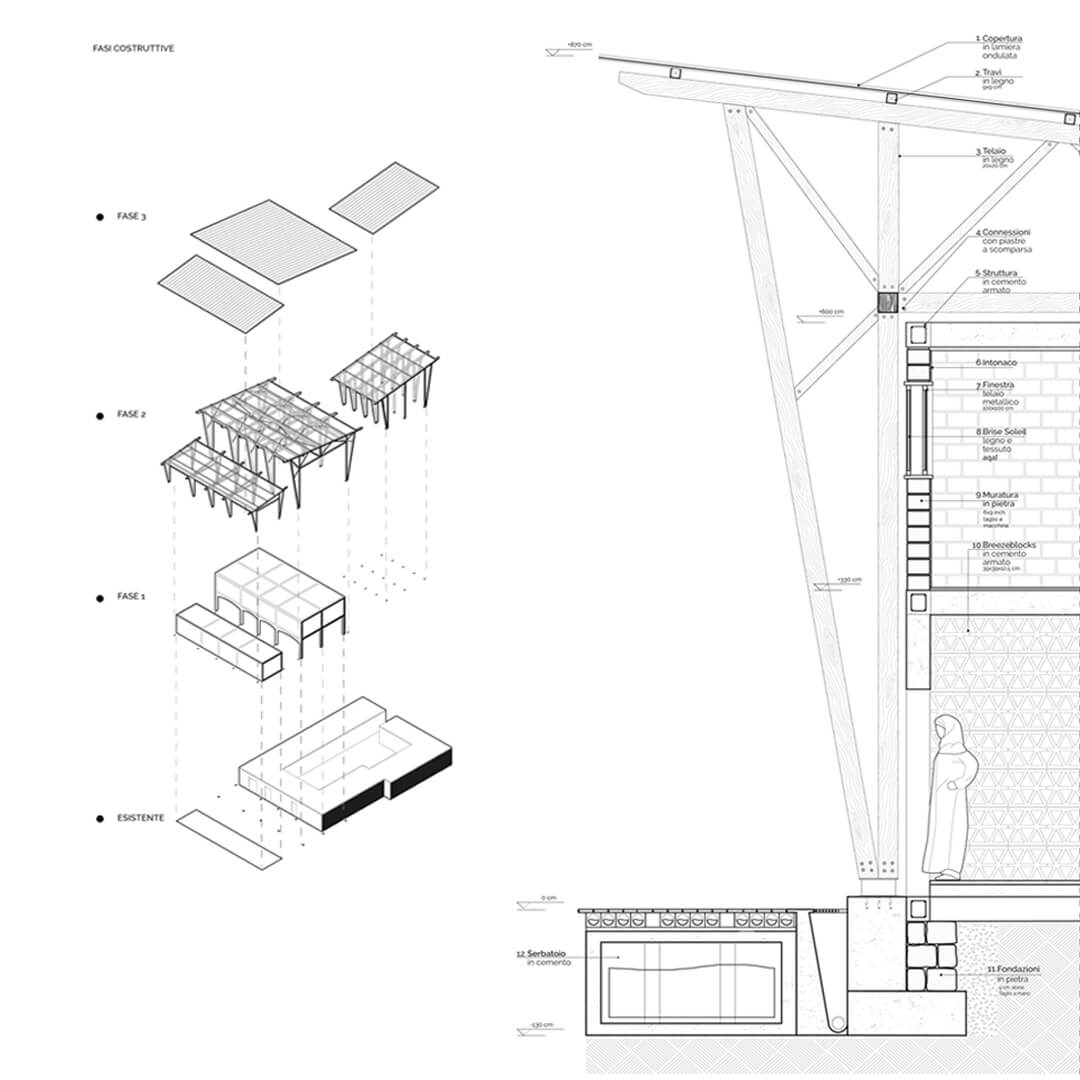 For the commercial part of the city, the design proposal includes the possibility of allowing access to the wide flat roofs of the shopping malls, turning them into elevated public squares to make up for the lack of open air spaces. These spaces will complement the microcosm of the shopping malls that we could describe as “cities within the city” with shops, bars, restaurants, banks, travel agencies, mosques and more. The study focuses especially on ’Amal Shopping Plaza’ which is surely the most representative building of its kind: founded in 2002 by a group of refugees, it officially opened its doors in June 2004. 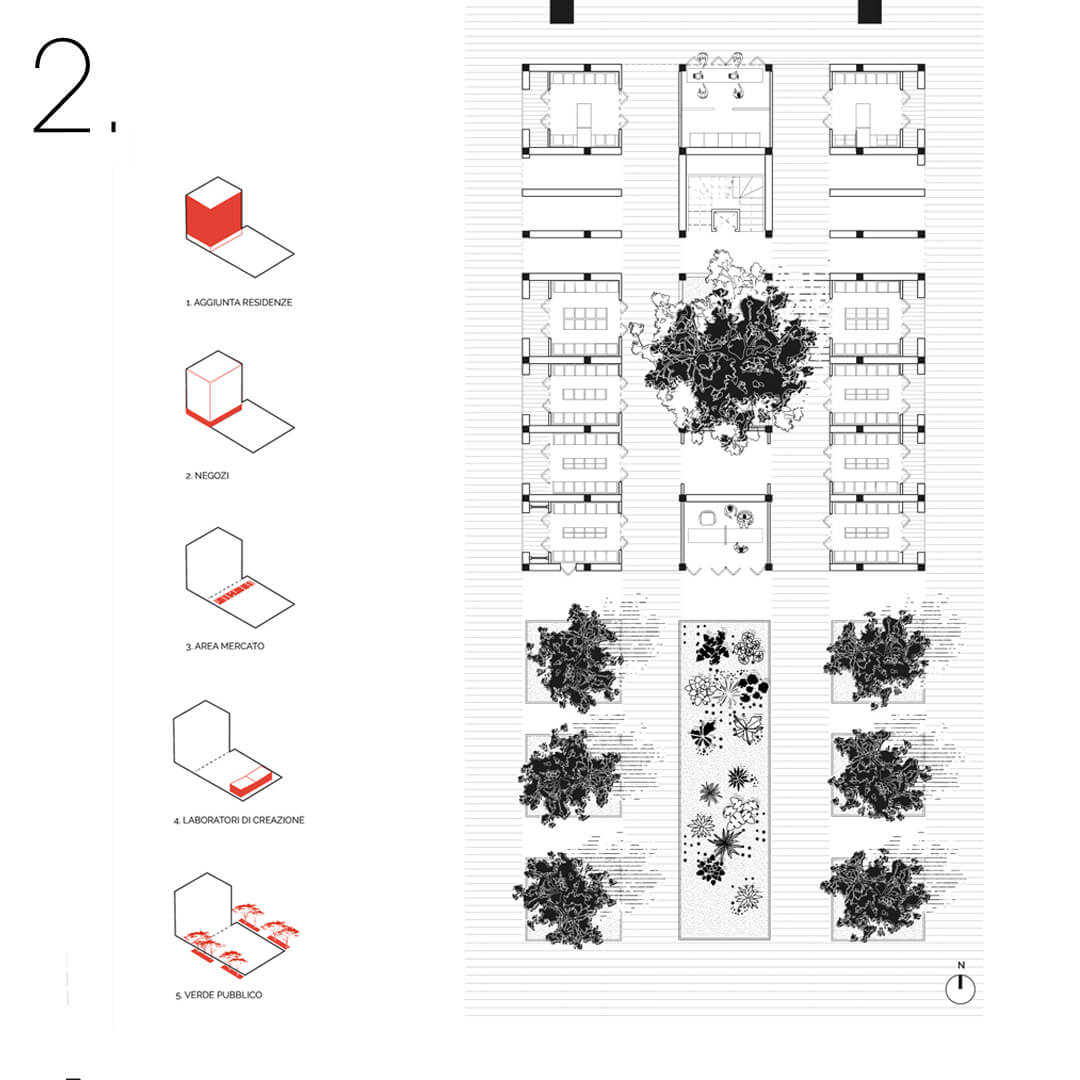 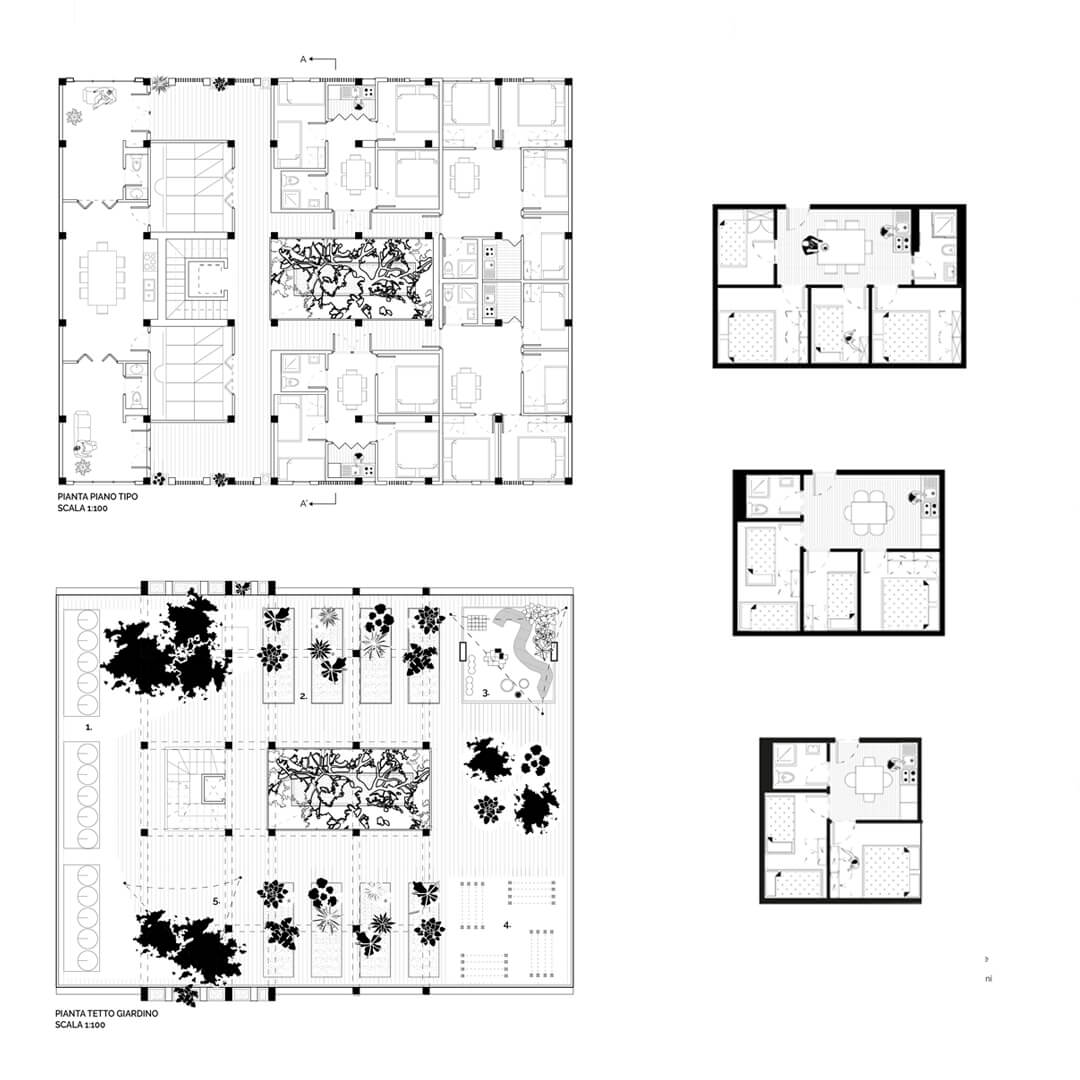 For the second block, the purpose is to complete the urban fabric with a co-housing designed respecting the most important Islamic principles in the matter of living. Concerning the last city block, the design is mainly aimed at solving the residential issue, that is overpopulation, in a neighborhood where unplanned urban development has caused a serious lack of infrastructure and services. Living and trading are two inseparable aspects of everyday life for a Somali in Nairobi. For this reason, the related spaces and environments have been placed inside the same building complex. The starting point for the redevelopment is the so-called ’Asian house’. These dwellings are usually built on one floor and often expanded with informal extensions. 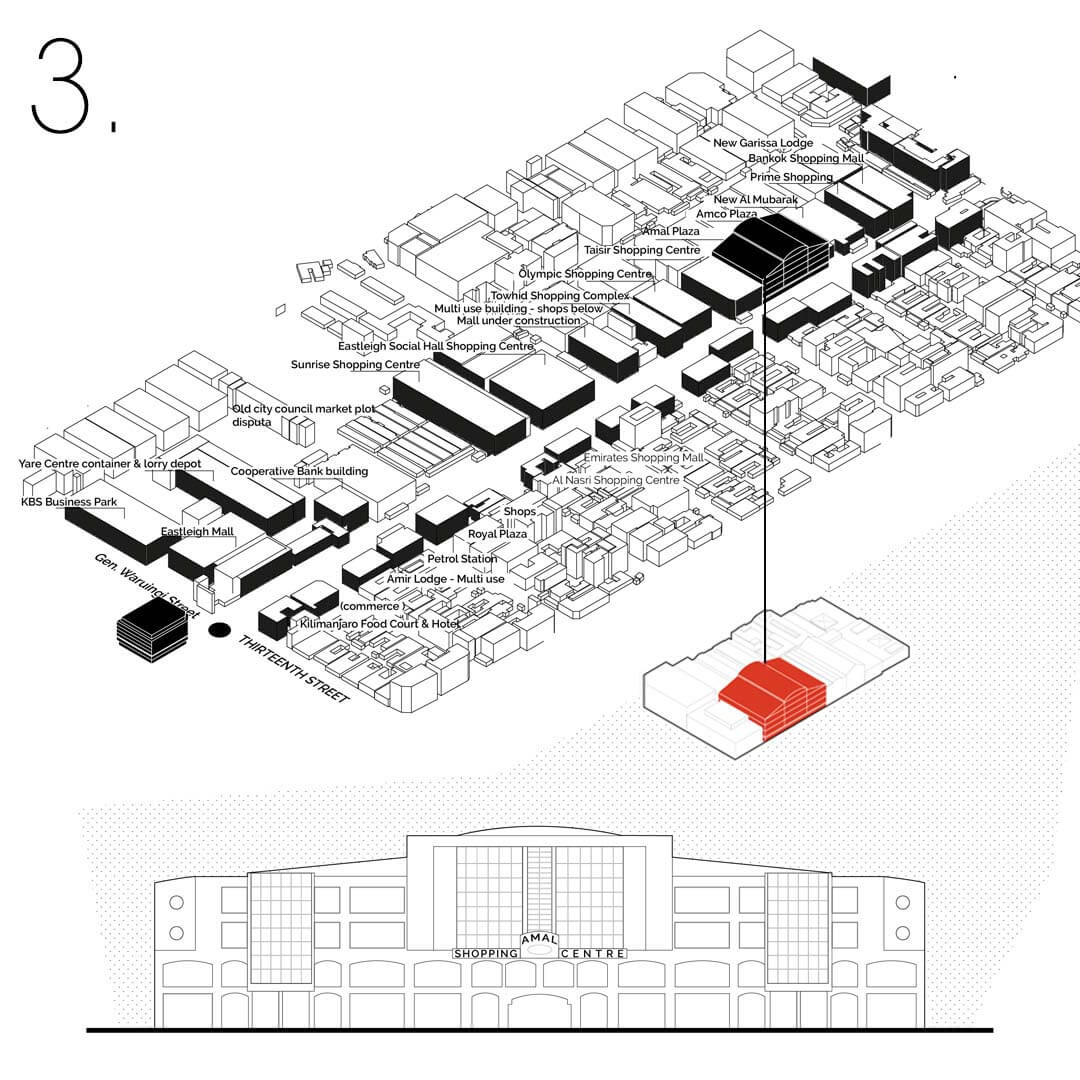 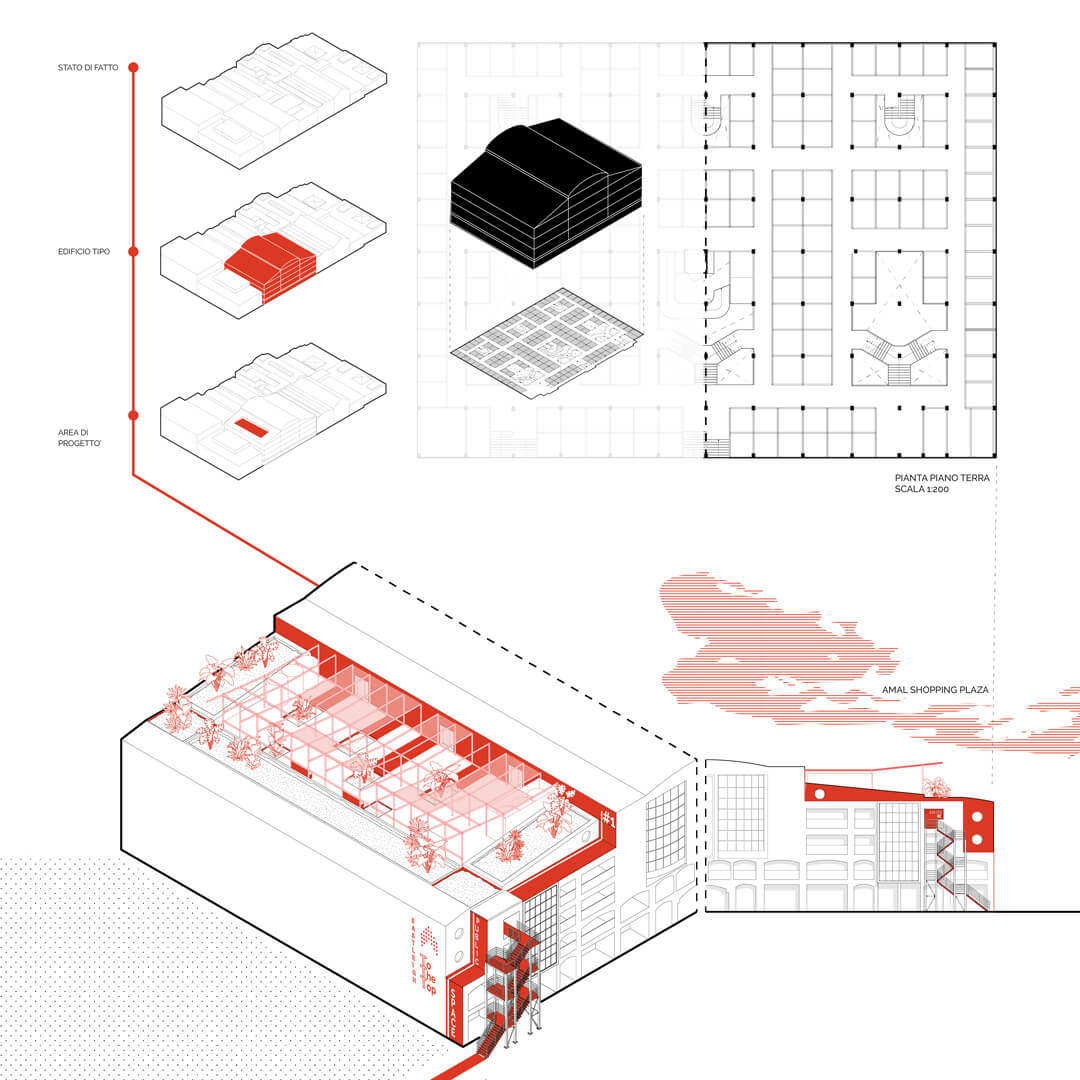 The project foresees the conservation of these buildings, supplementing them with superstructures that don’t lean on the existing ones. Informal markets are replaced by box-stores which have the street on the backside and overlook the pedestrian path, which also gives access to the houses. The materials used are all locally available and include volcanic stone and pine wood, besides the supporting structure in reinforced concrete, consistent with Nairobi’s traditional building techniques. Special attention has been paid to the collection and reuse of rainwater, which falls abundantly during the rainy season. The large roofs protect the building and its outdoor courtyard and channel the water to collection points where it converges with the water collected by the ’Rain Tiles’ system that covers the pedestrian road between the houses and the shops as well as the outside spaces.