Reimagining the idea of education through utilizing the natural environment as a tool for education and creating a deep sense of identity to the surrounding area. 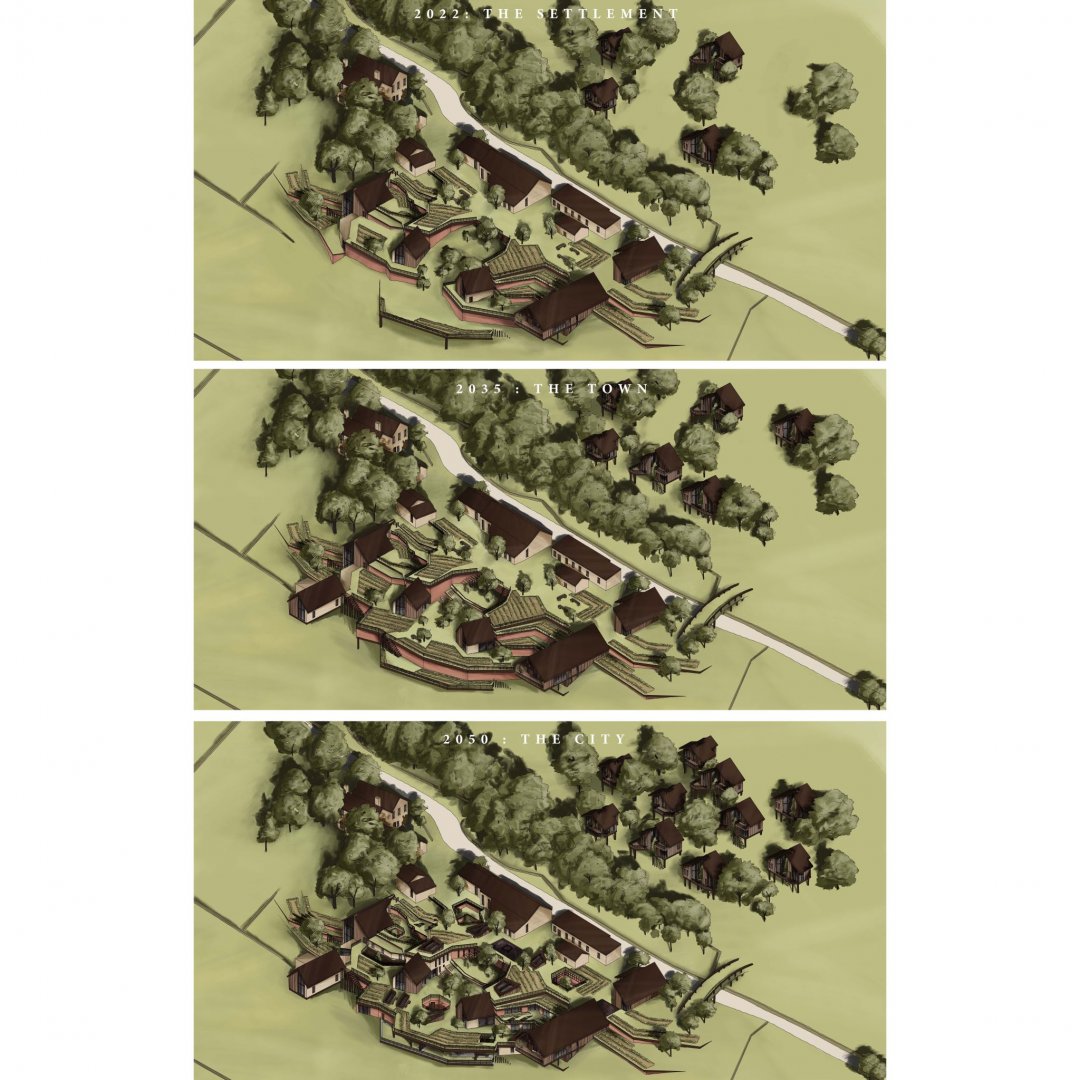 With the rise of globalisation and technology, we are becoming out of touch with our natural roots and being swept away in the fast paced, artificial world laid out before us. Depression is on the rise and our natural environment we once called home is on the brink of collapse. The Living School tackles both these issues through design, creating a place to house a new form of education, allowing people of ages to learn through nature and gain a strong sense of community in the process. Farming is a big part of the learning process and allows students to become self-sustaining and focus on regionality. The model for the curriculum is based of the forest school association and the Danish green free school programmes. The school is located north of Saltaire World Heritage Site, situated in Bradford, West Yorkshire, drawing concepts from the Victorian village. Saltaire was established in 1850 by Sir Titus Salt and became one of the first garden cities and embodied Patrick Geddes ideas of local identity. I chose to replicate these ideas in a modern interpretation by applying Geddes’ concept of ‘place, folk, work’ to my thinking. 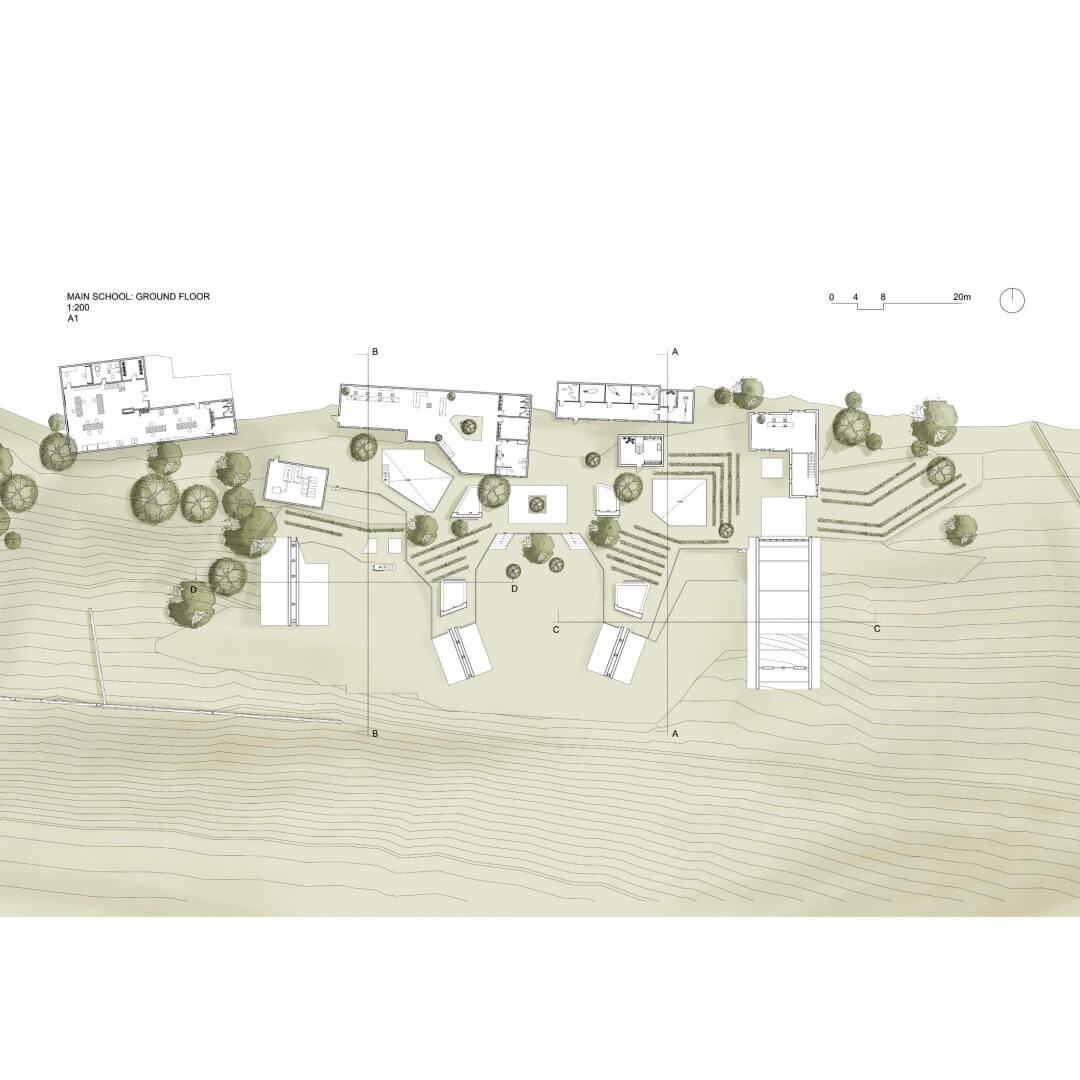 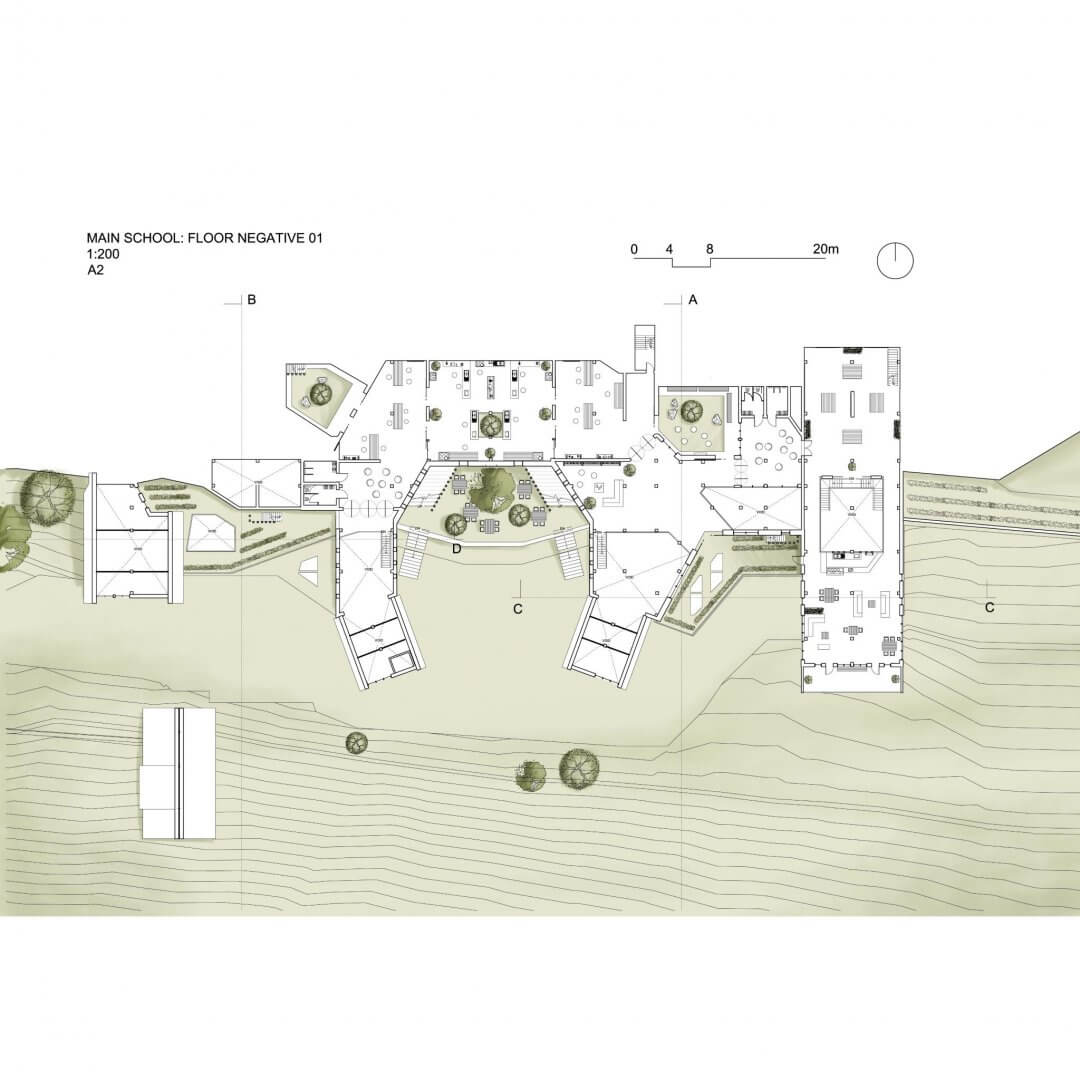 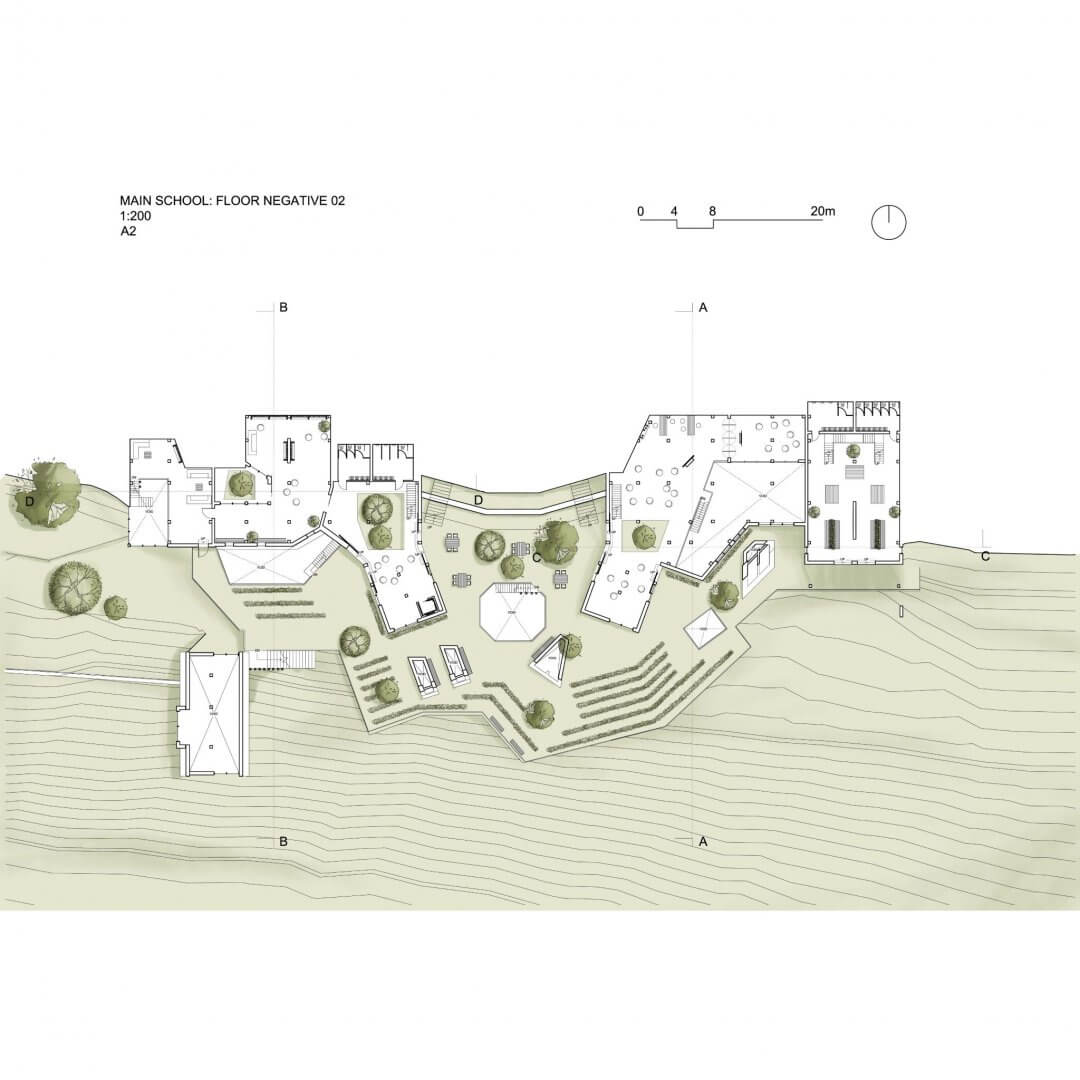 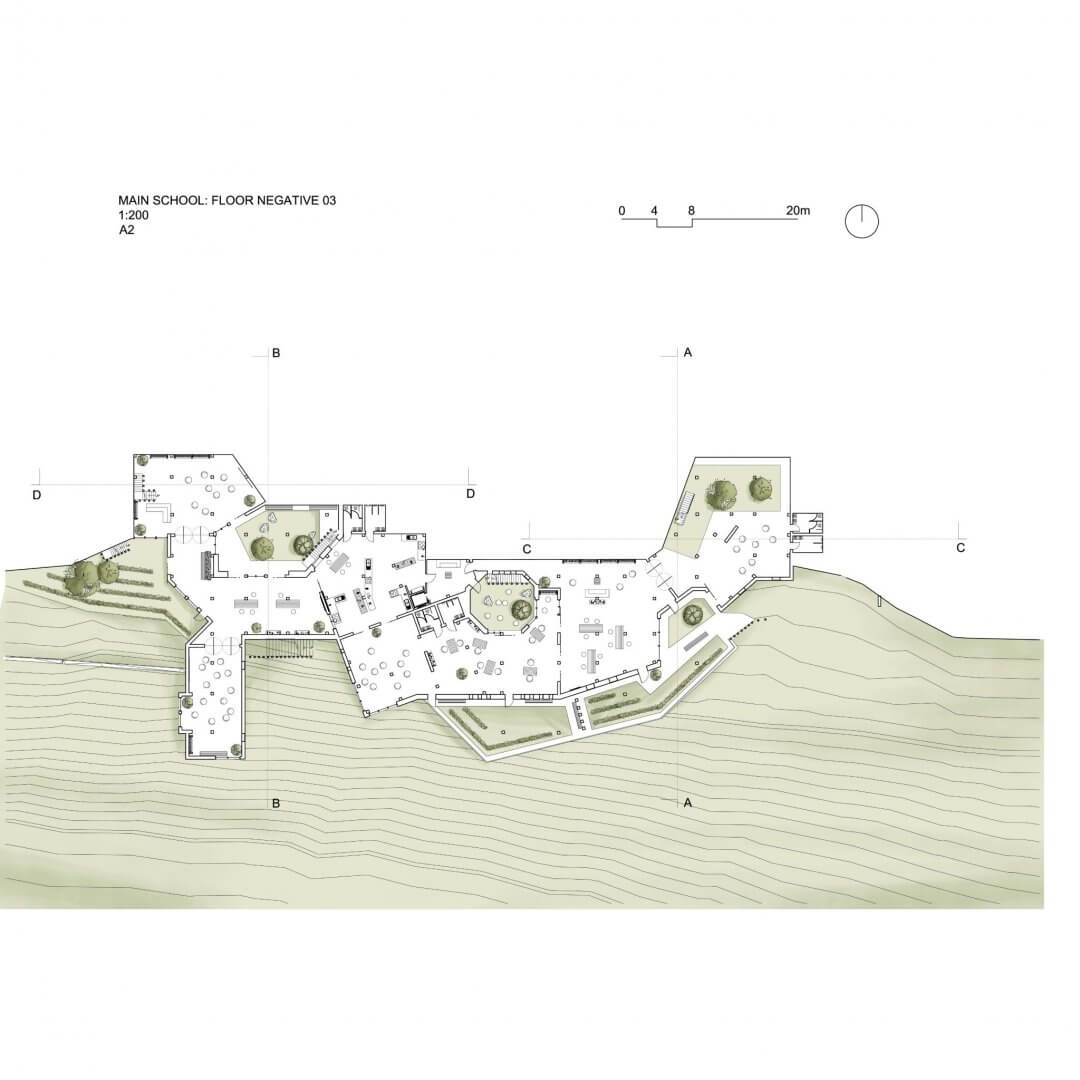 The ‘place’ became the focus on creating an identity for the school. The architectural language and materiality of Saltaire was translated into the form of the building through the use of sandstone and pitched roofs. The sense of community, which was so prominent in the village, was employed into the programme through the central dining space in the centre of the proposal. This acts as a meeting point for the students to discuss what has been learnt throughout the day and reflect as a collective.

The ‘folk’ is interpreted as the students who work together as a community on projects which take place as part of the school curriculum. Students also work together to grow their own food which is then used to prepare meals to then be shared in the central dining space as a collective.

The ‘work’ functions as learning through making or growing, the idea of working practically to produce something which becomes beneficial both educationally and economically for the community. This adds to the self-sustaining and local aspect which is lacking in today’s society. 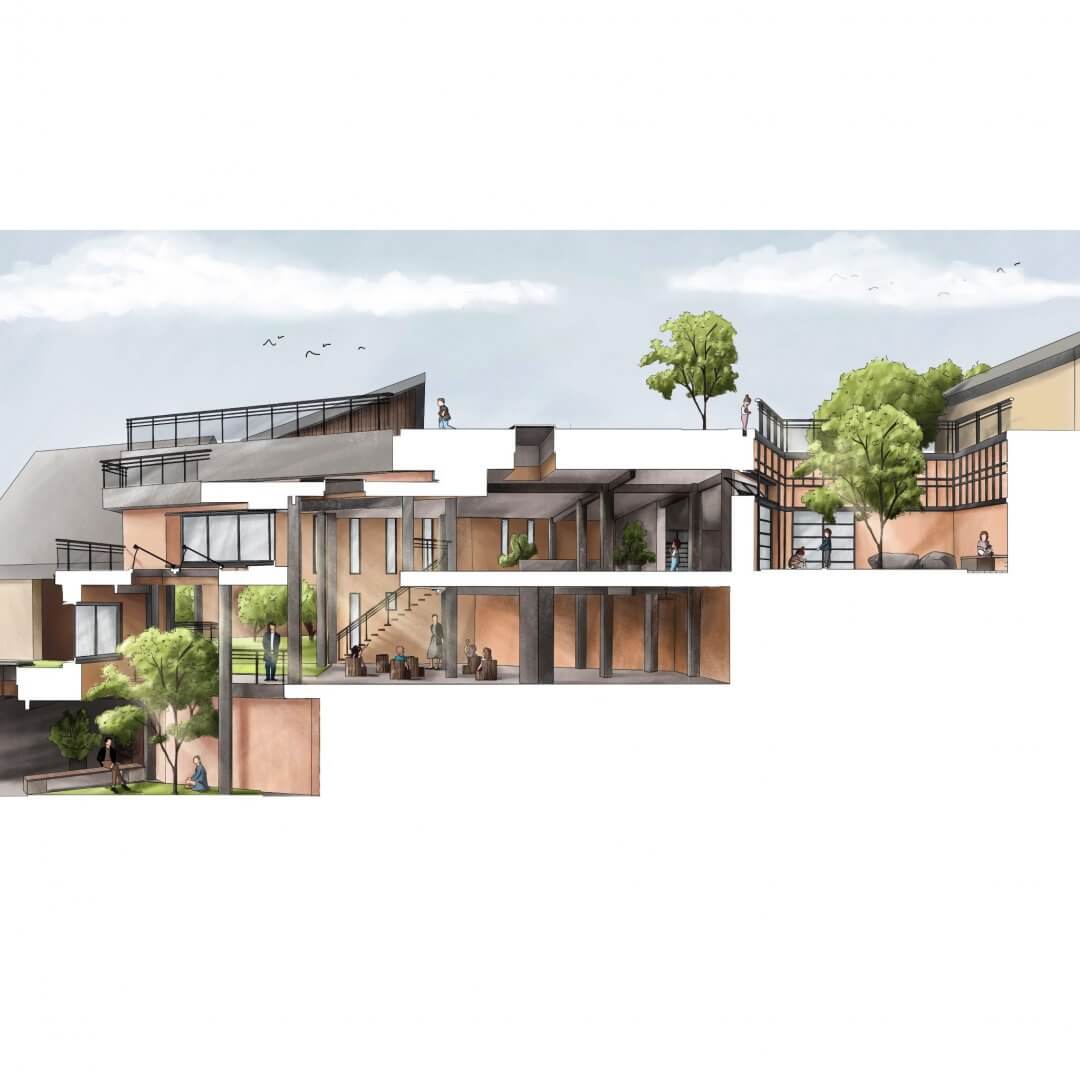 Following more ideas of Geddes’, the school is constructed slowly over decades, based on the concept of the living city. This is the thought that a truly sustainable city must first evolve from a sustainable settlement which is adapted to the environment. The settlement will inevitably become a city which is fully adapted to the local environment creating a truly sustainable city. In the year 2022, basic school provisions are completed, allowing for teaching to begin. The students take part in the construction process while being heavily supervised, allowing them to learn through craft. The school facilities slowly expand throughout the years and eventually become the final form of my design in 2050. 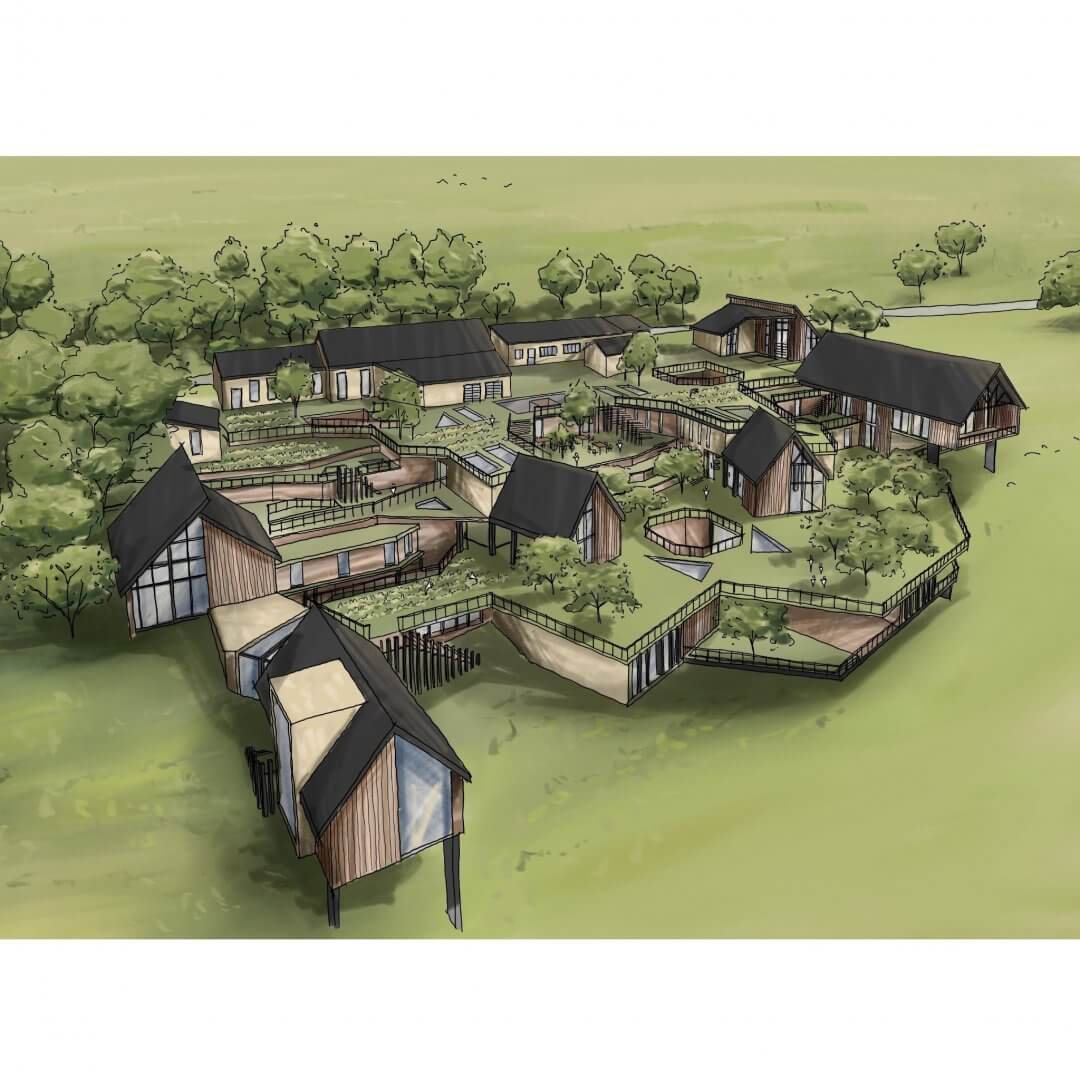 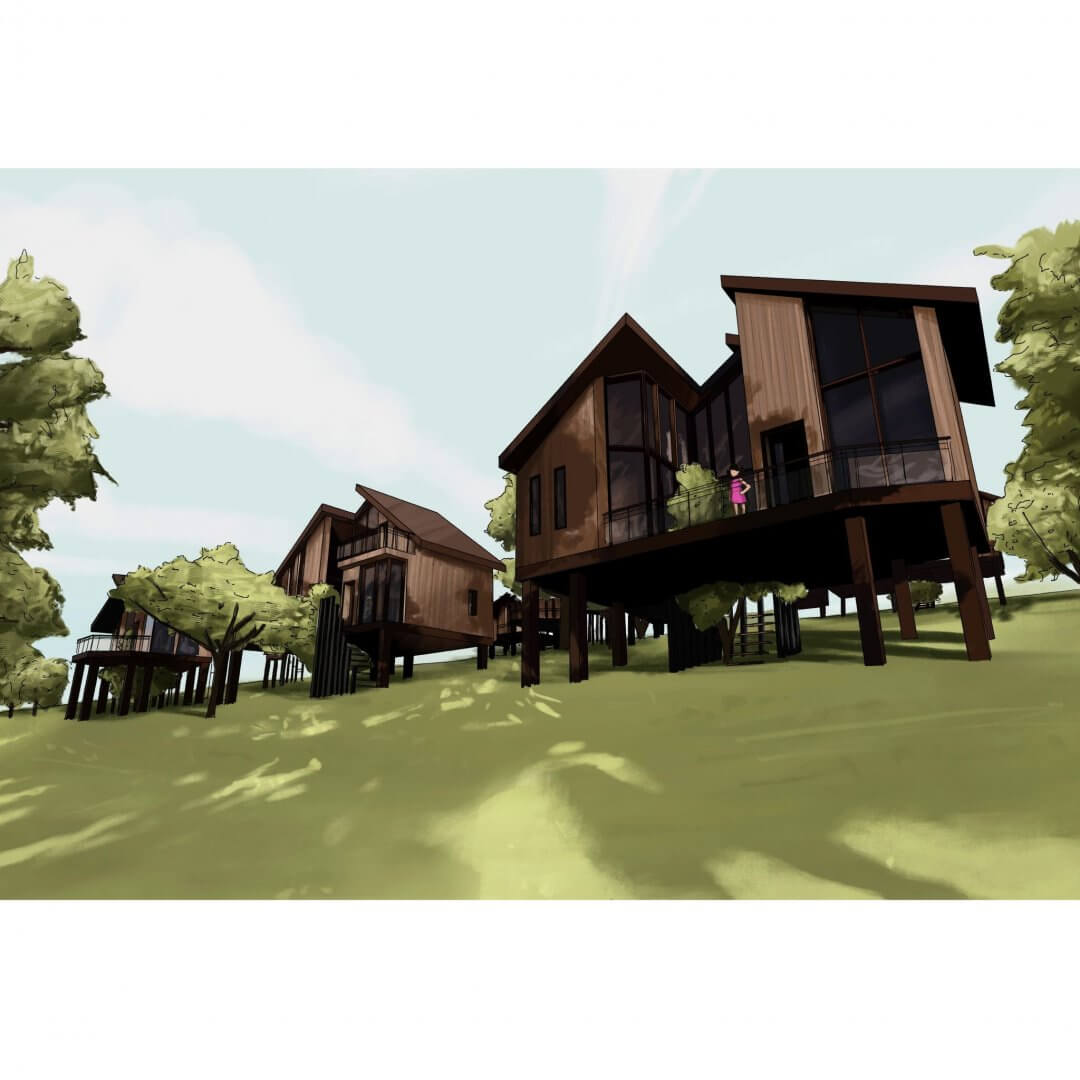 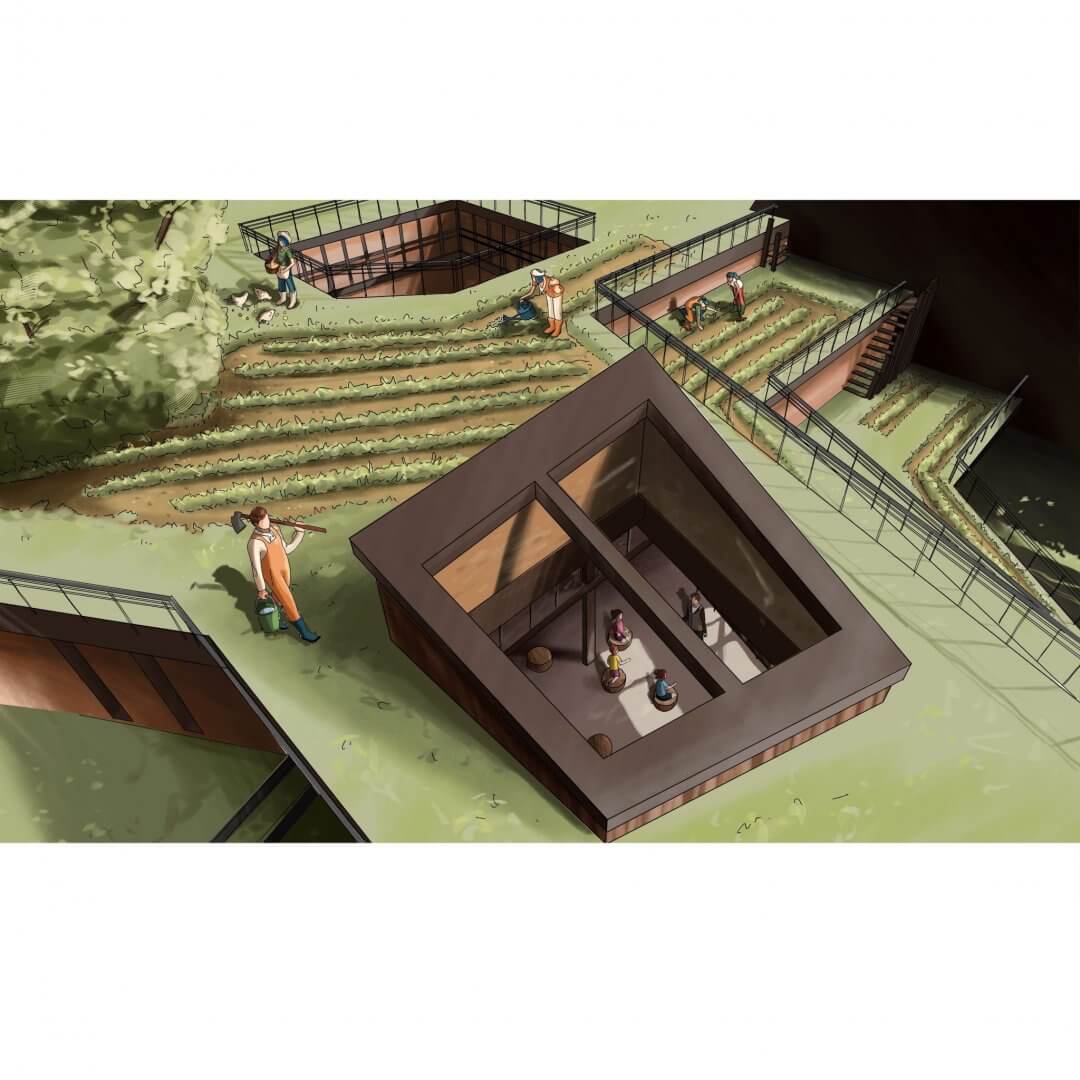 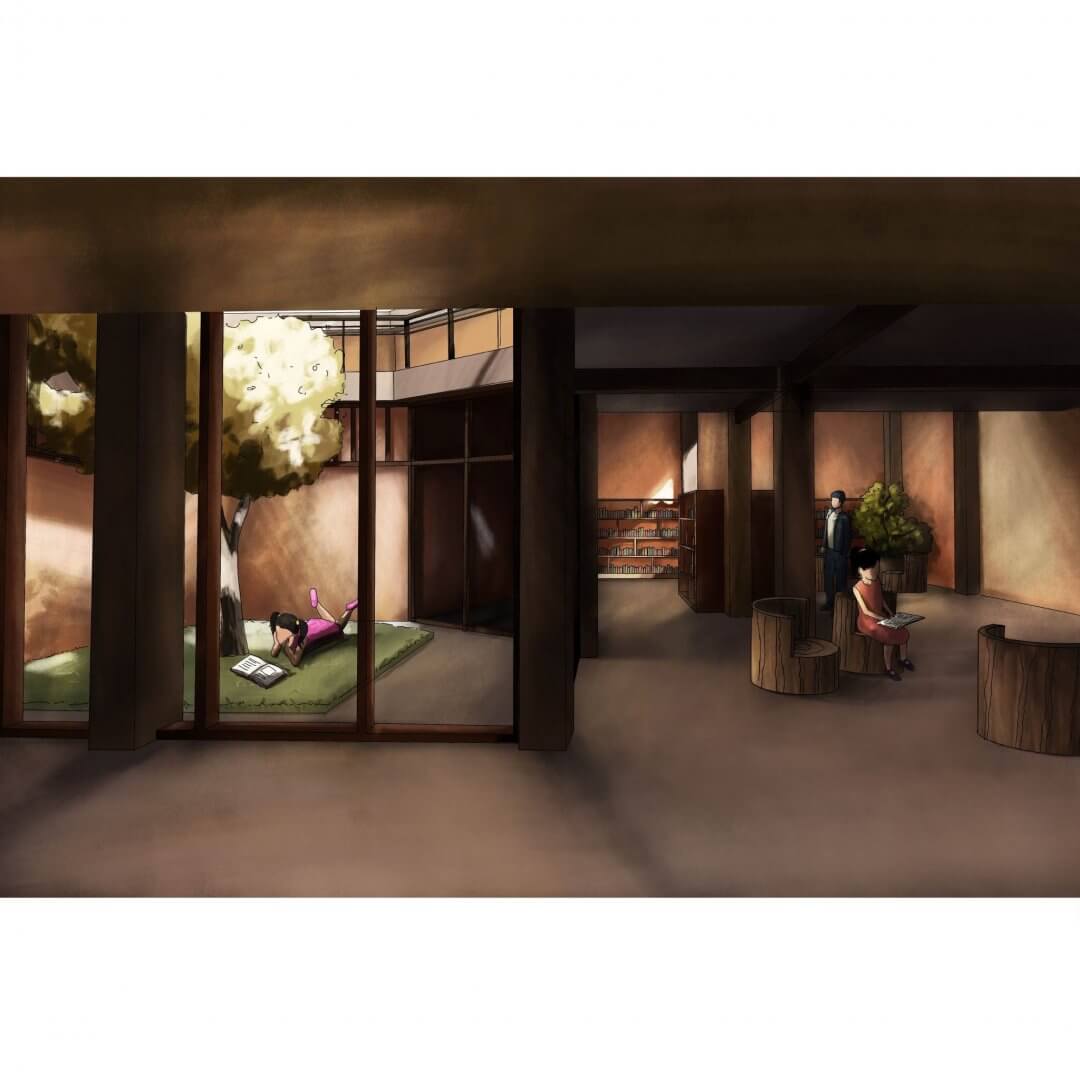 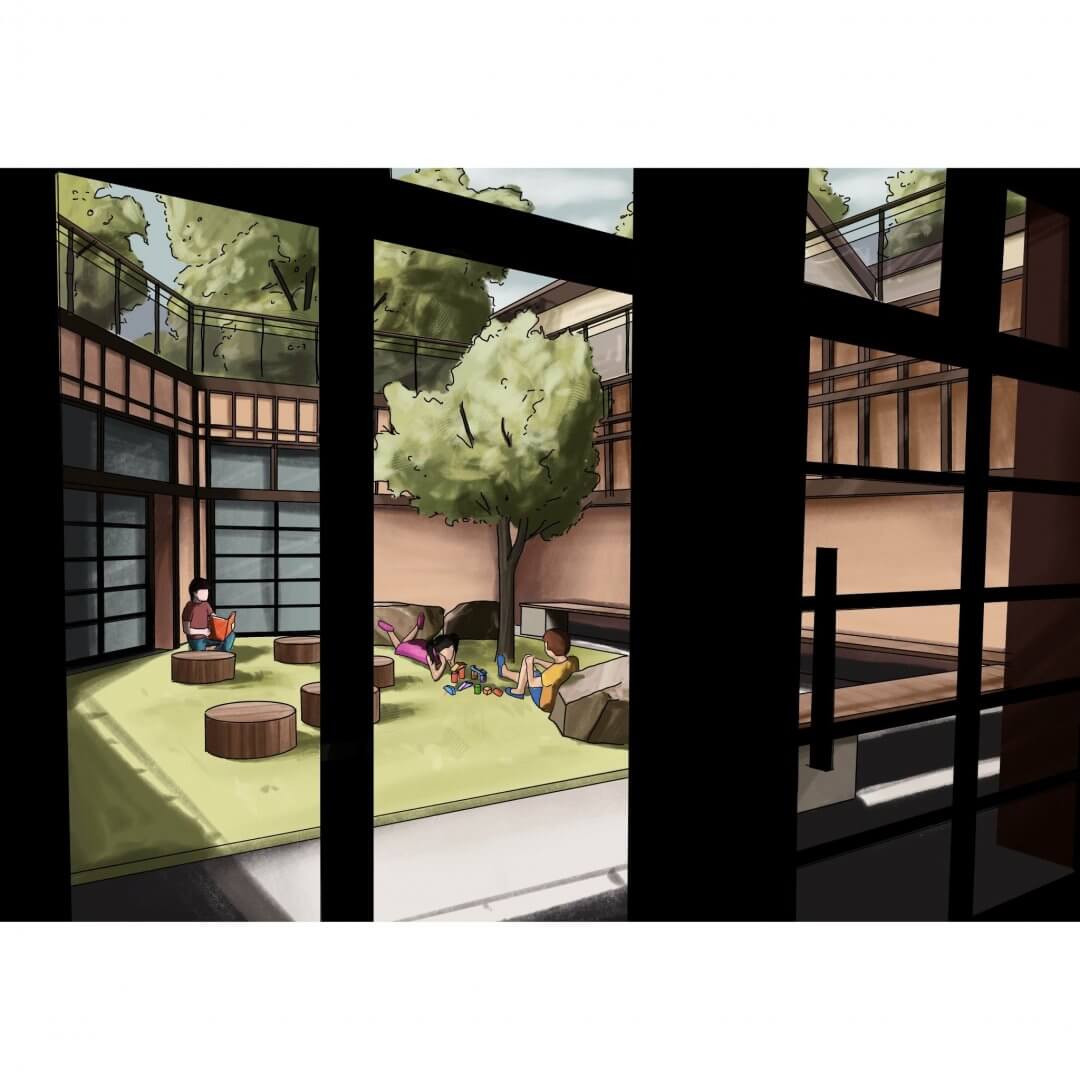 The main part of the programme focuses on the school facilities, which are open to all ages and are divided up as follow: Sprouts, aged 3-9; Seedlings, aged 6-11; Branches, aged 11-16; Inflorescence, aged 16-19; and Great Oaks, aged 19+. This is based on the growth cycle of a tree.  The younger age groups are situated in the centre of the facility with the older ages further out towards the elements to act as a barrier and protecting the younger ages.The living school is mainly open for residents in surrounding villages, however, the tree house accommodation situated on site allows for users that may live further away to experience this alternative form of education.