It carries a very strong symbology about the nomadic, a way of life that has been part of the history of humanity since time immemorial, which, transferred to funerary architecture, poses an alternative perspective of death and the way it is faced. 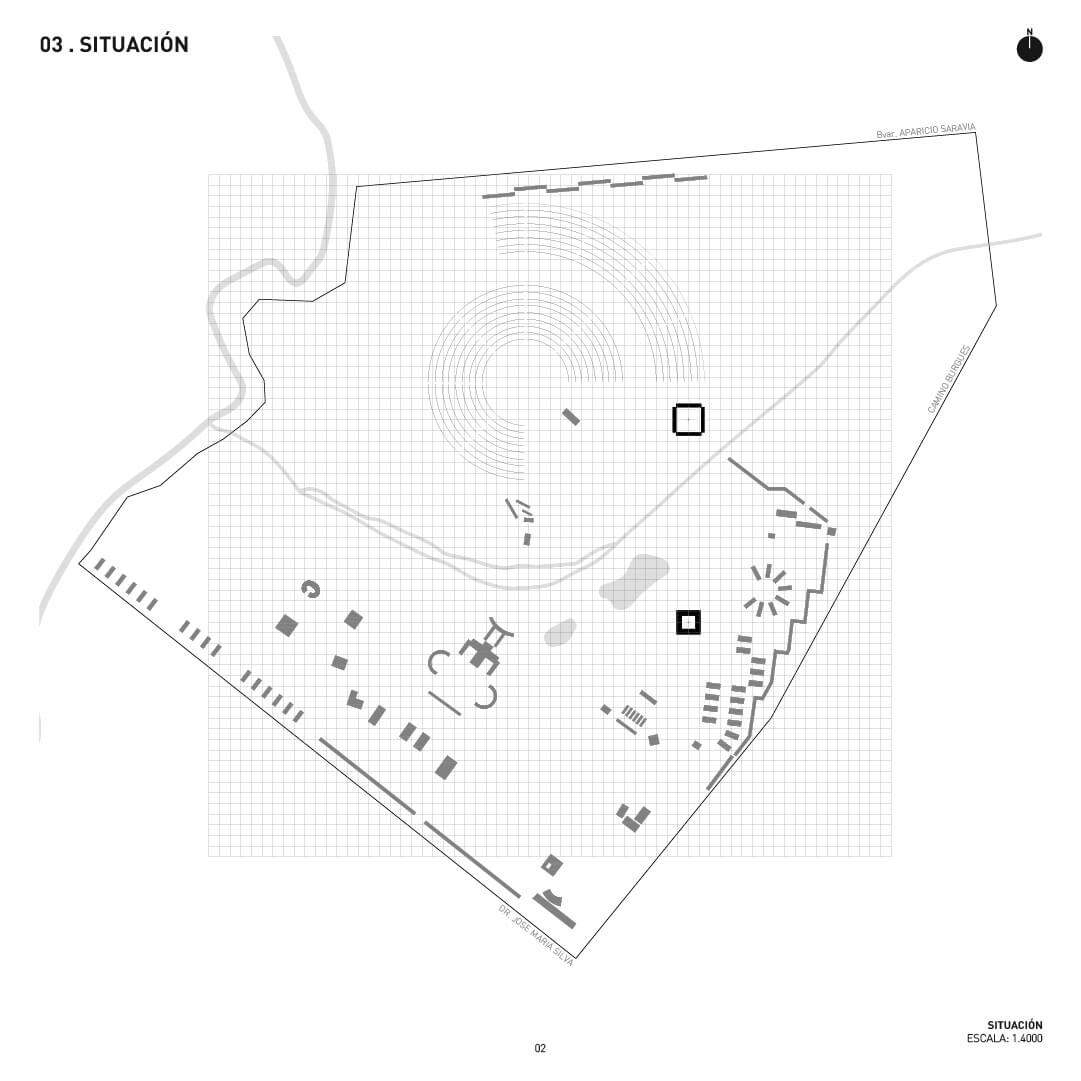 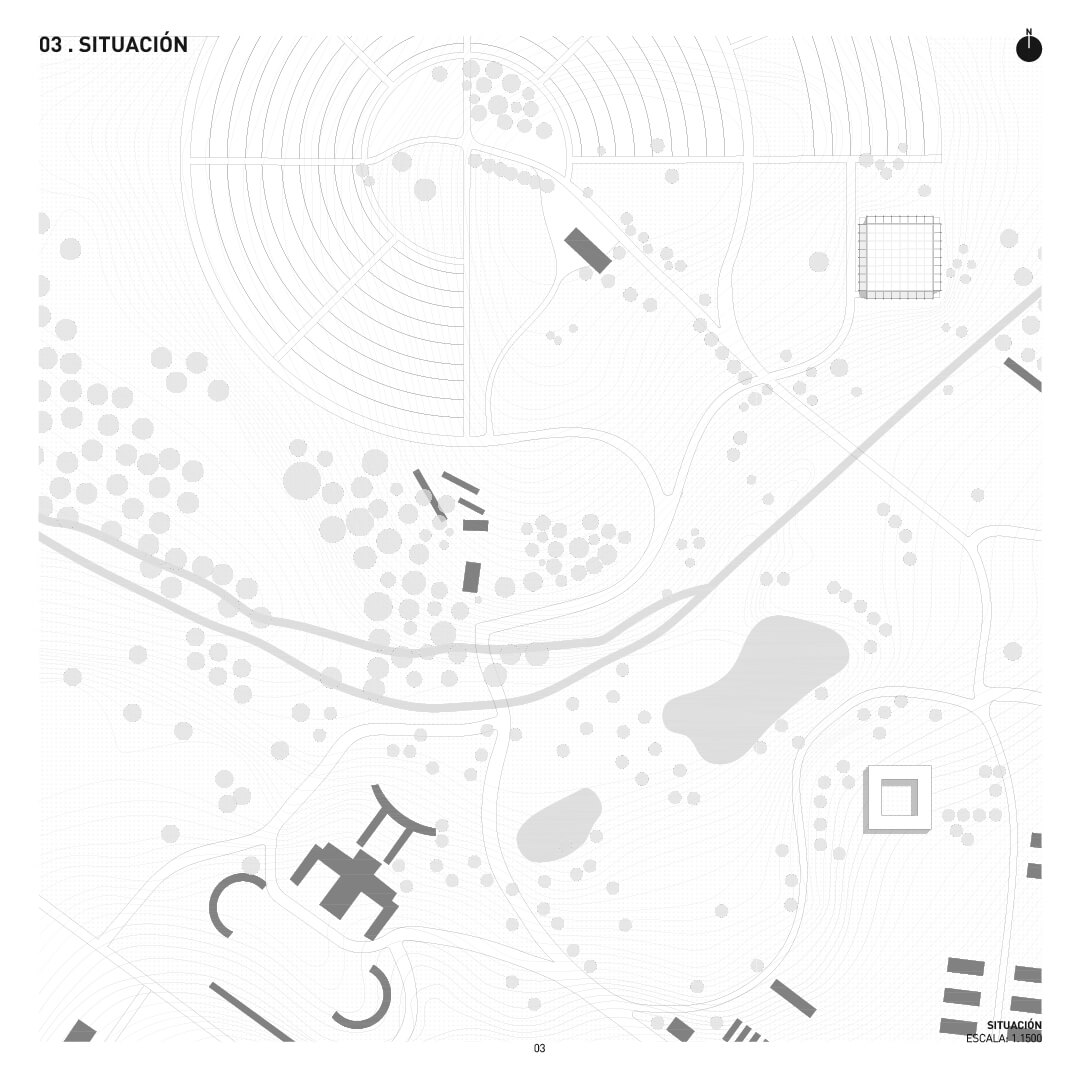 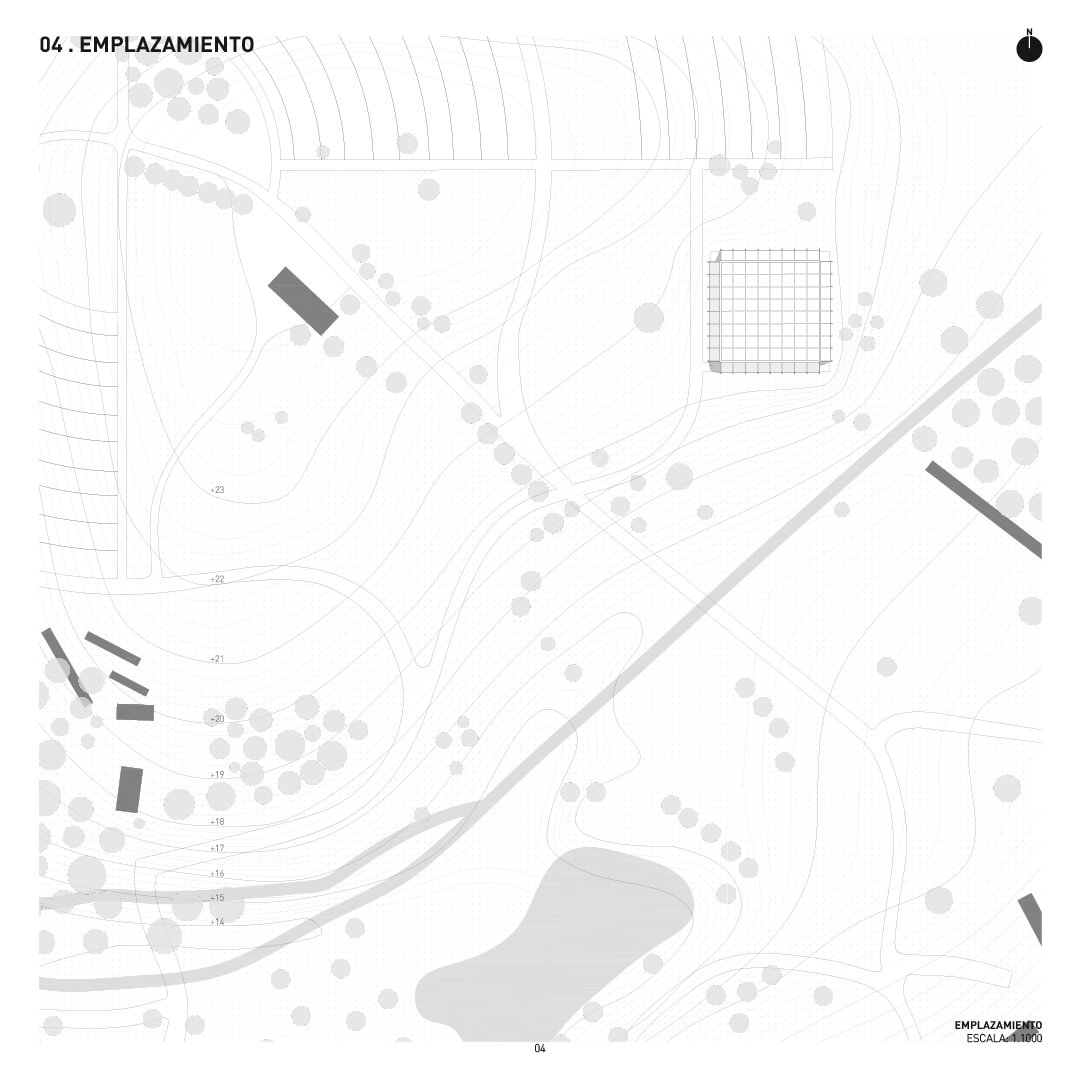 The eternal vs the ephemeral

“The only eternal thing is change”
Heráclito de Éfeso

Funerary architecture, directly associated with the concept of death, bases its conception on the idea of ​​eternity. This undeniable relationship results in heavy and materially durable constructions, which respond according to the need to house human remains, proposing architectures that seek to settle forever. Although it is a historically valid path, it is interesting to consider a different approach to the problem. In the ephemeral there is a new framework of possibilities; solidity is replaced by fragility, lightness prevails over heaviness and spaces acquire softer and more confused limits. These constructions are not indebted to tradition nor do they try to leave a mark on the future, they are humble and austere, and it is their intrinsic characteristics that allow us to think of different imaginaries for this specific program, the origin of the architectural discipline itself goes back to an object of these characteristics, the primitive shelter. 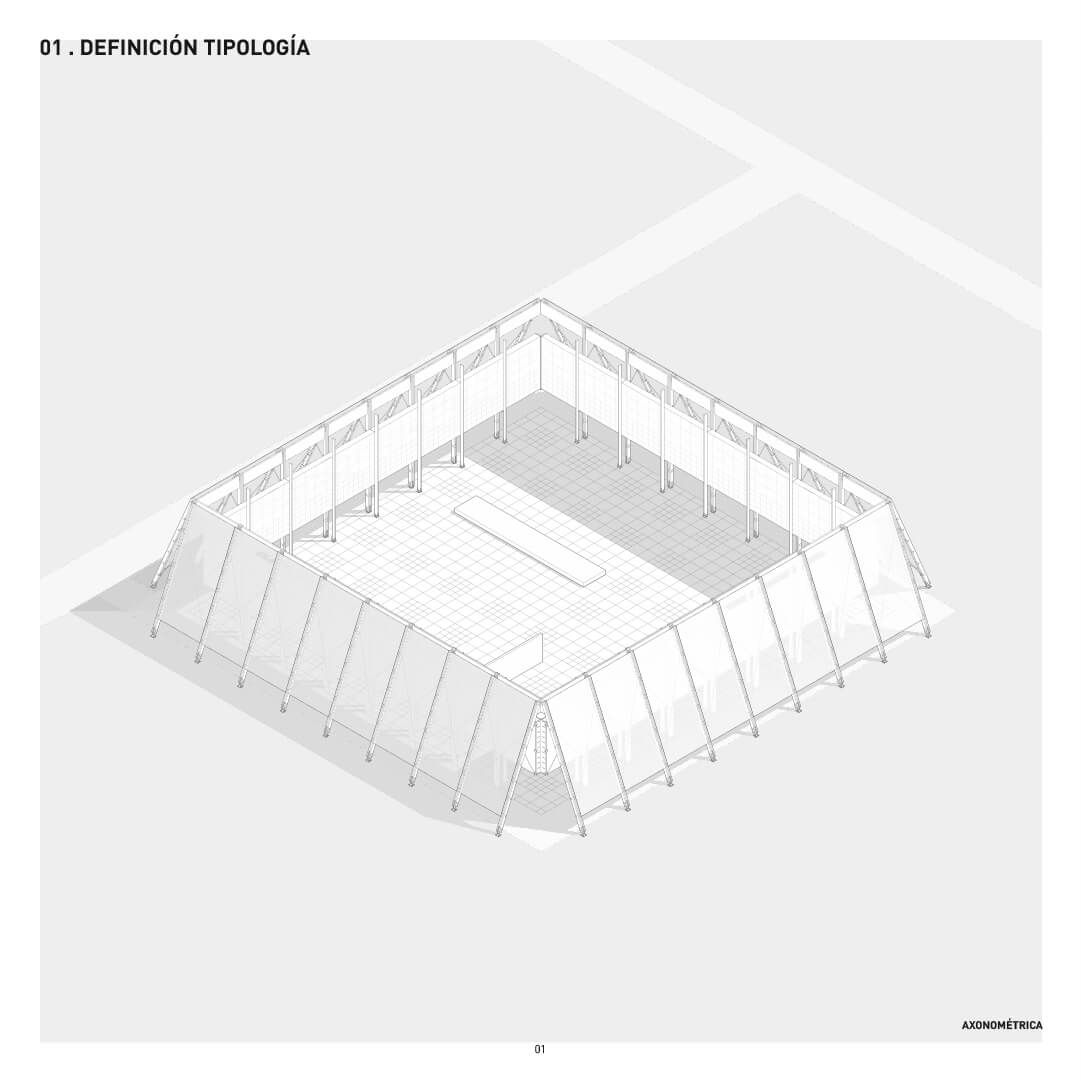 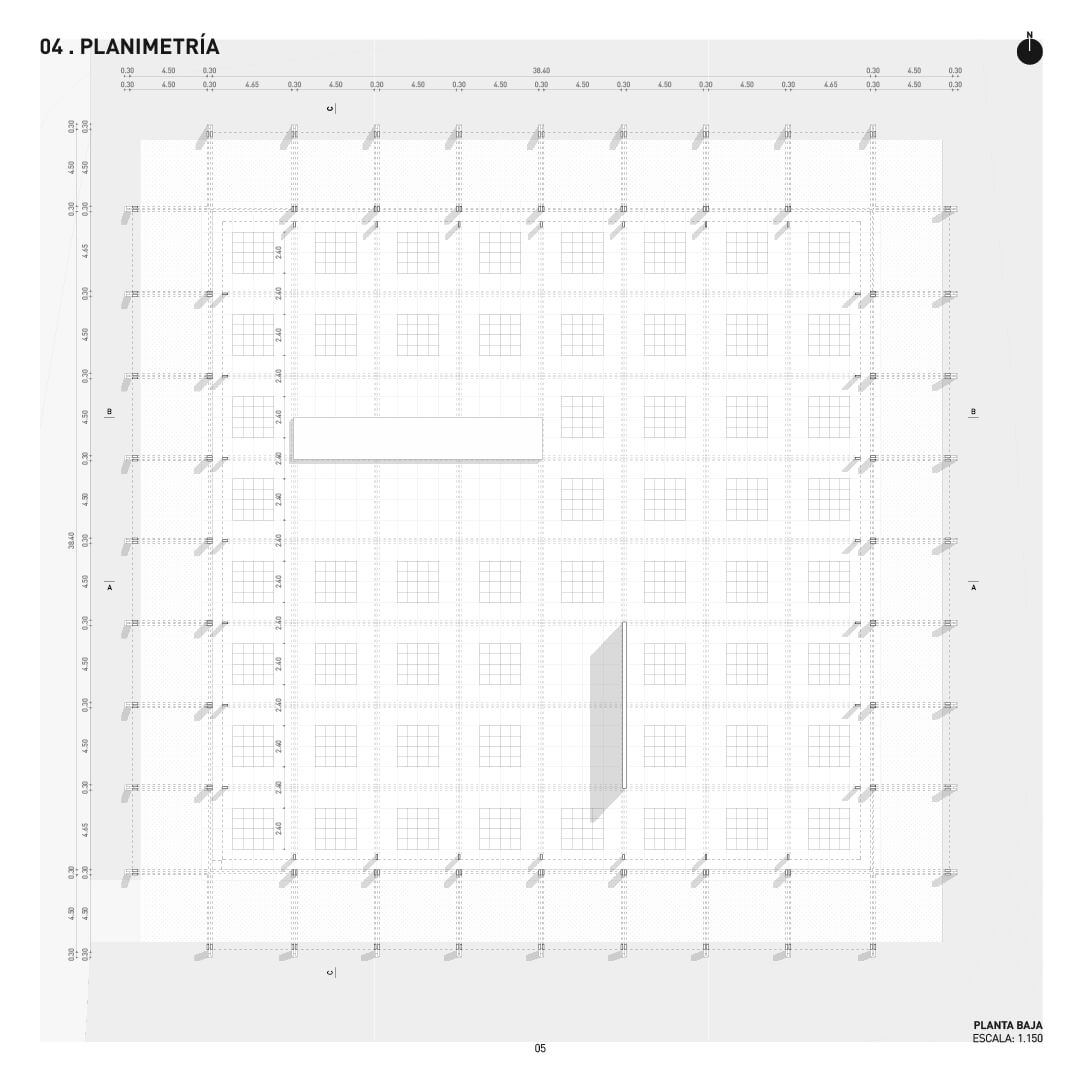 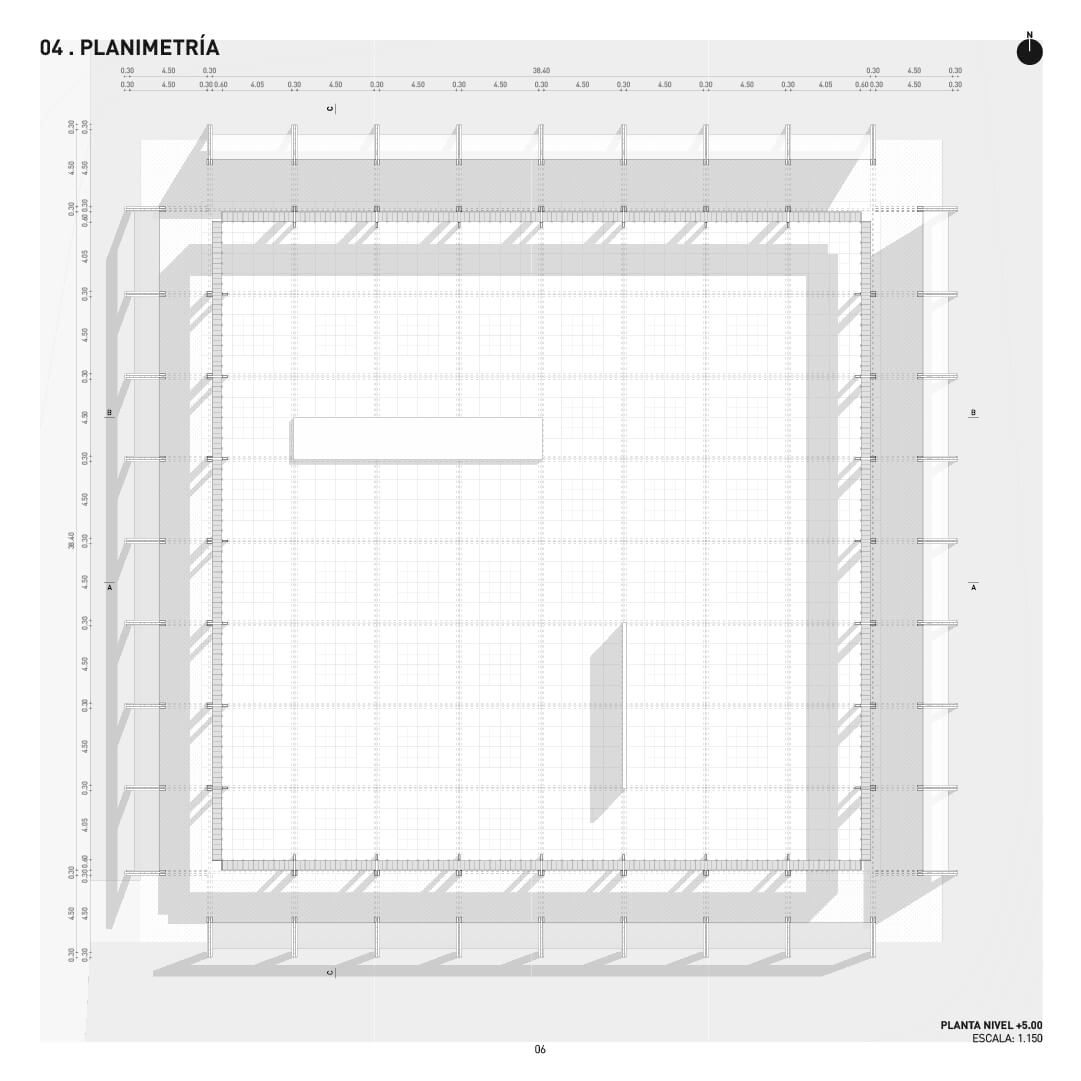 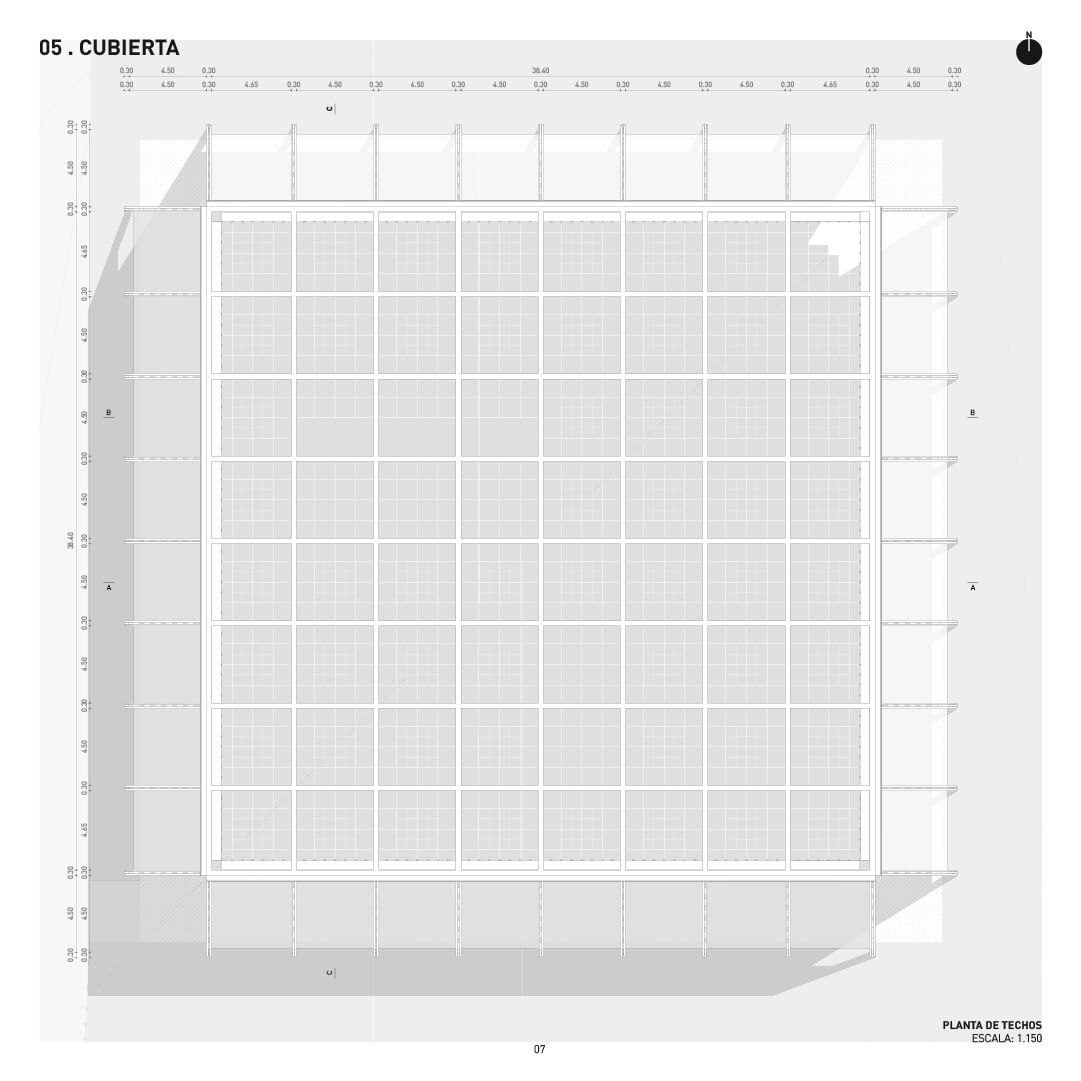 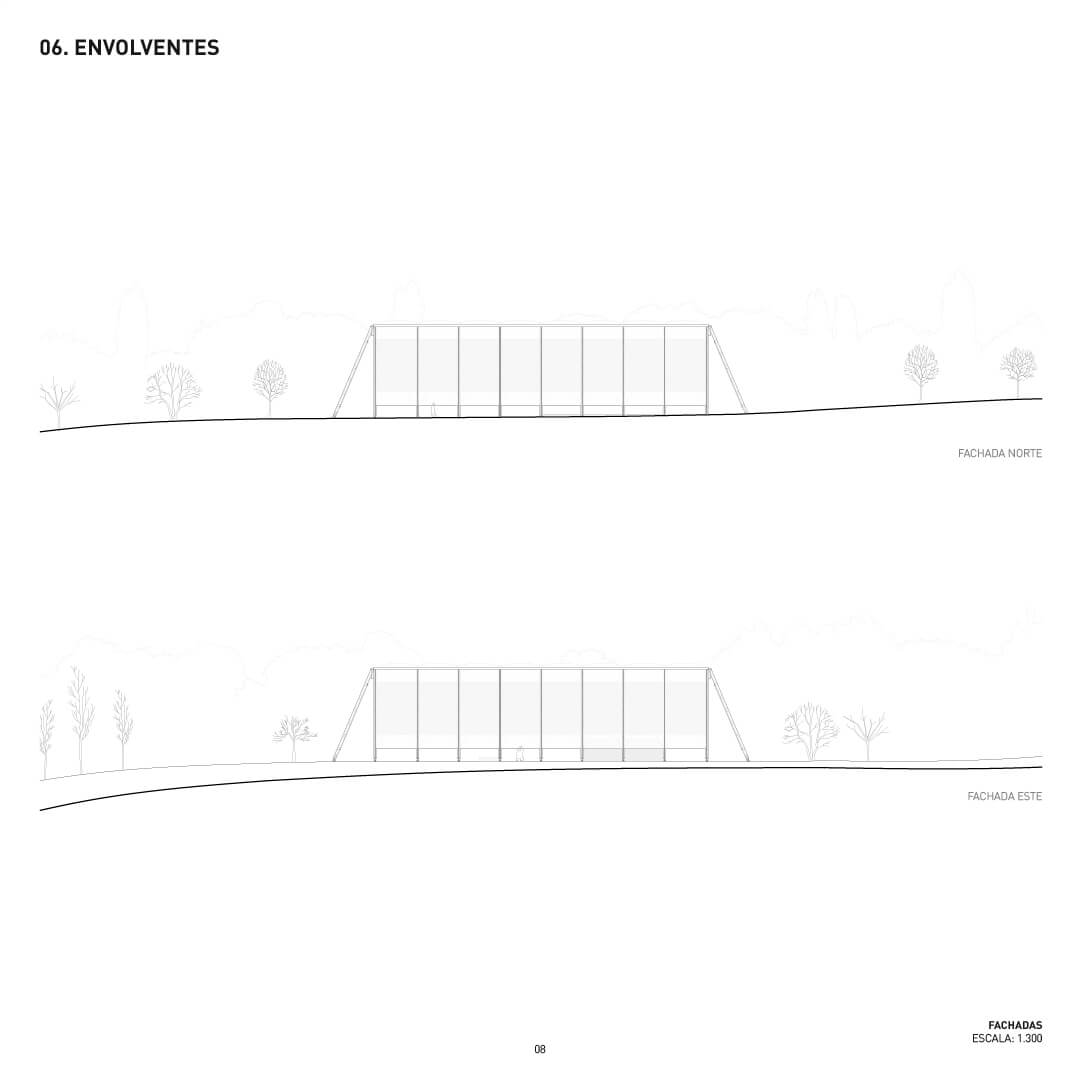 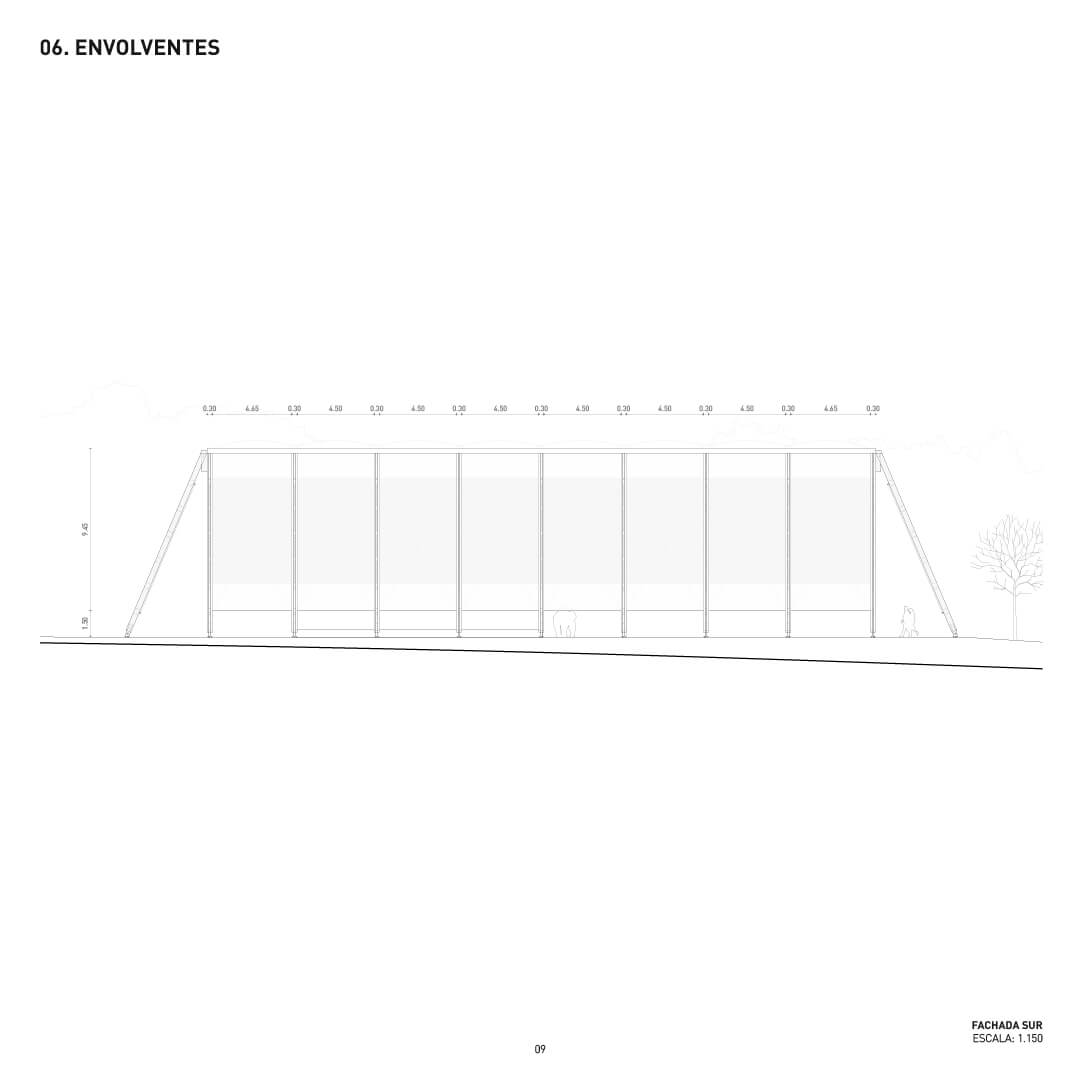 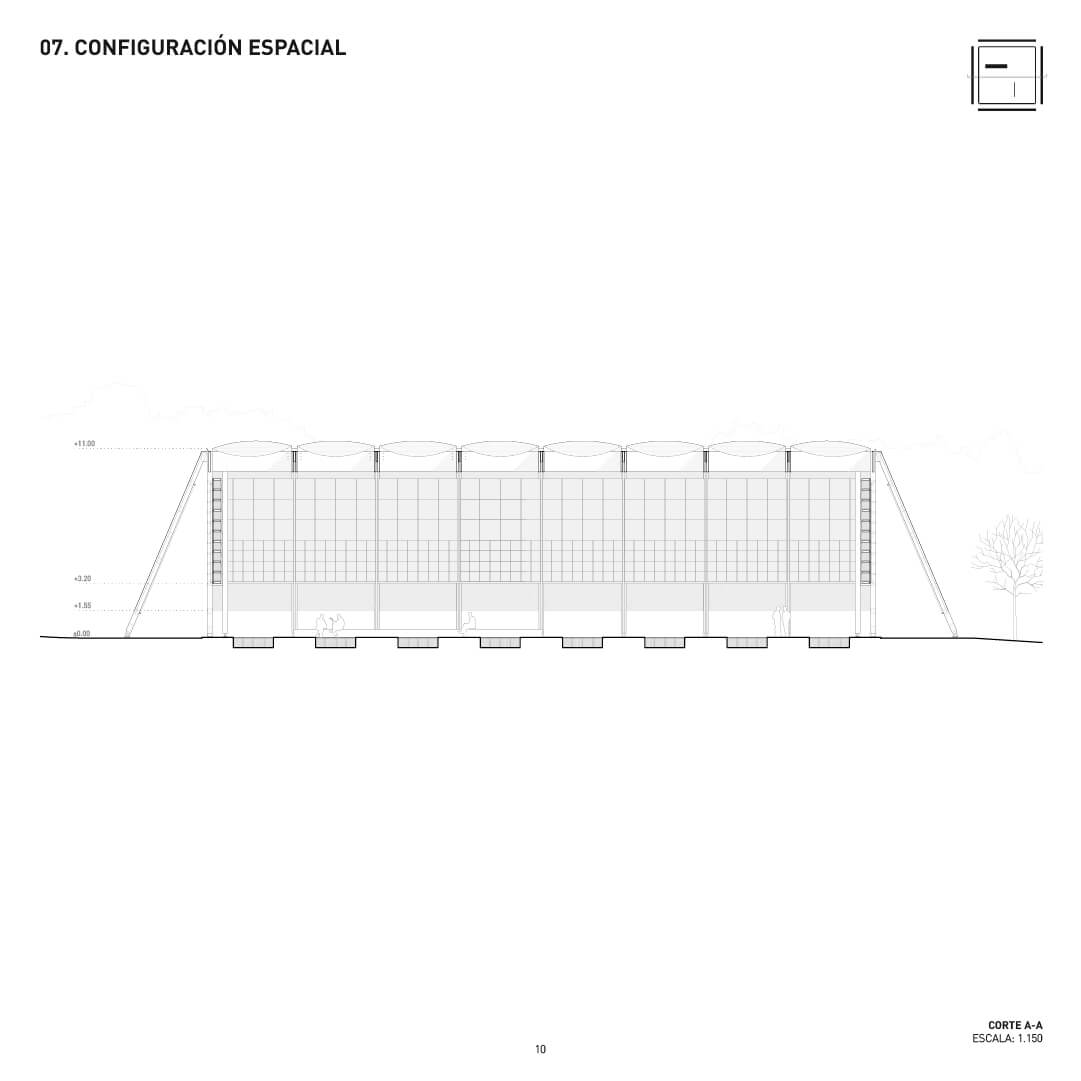 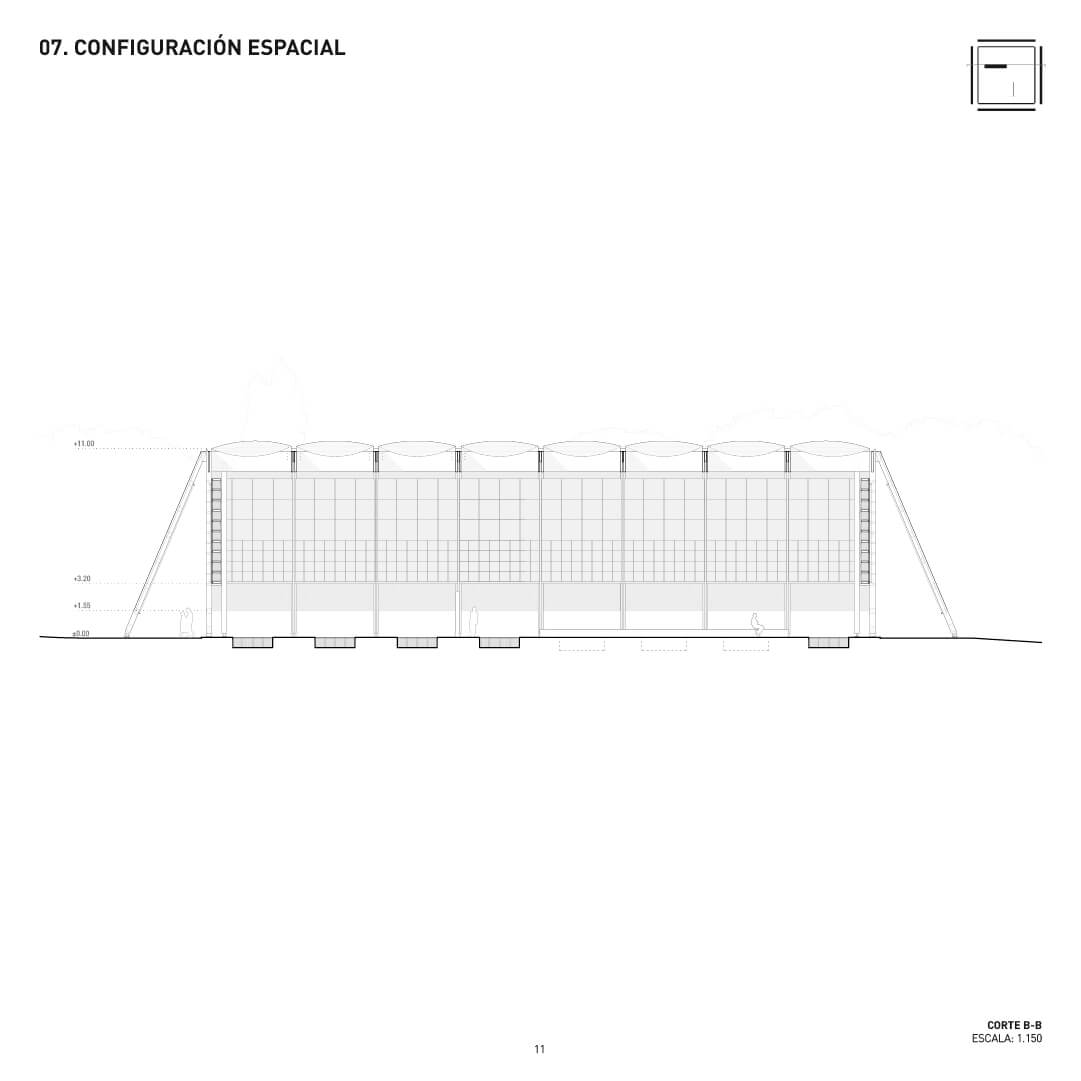 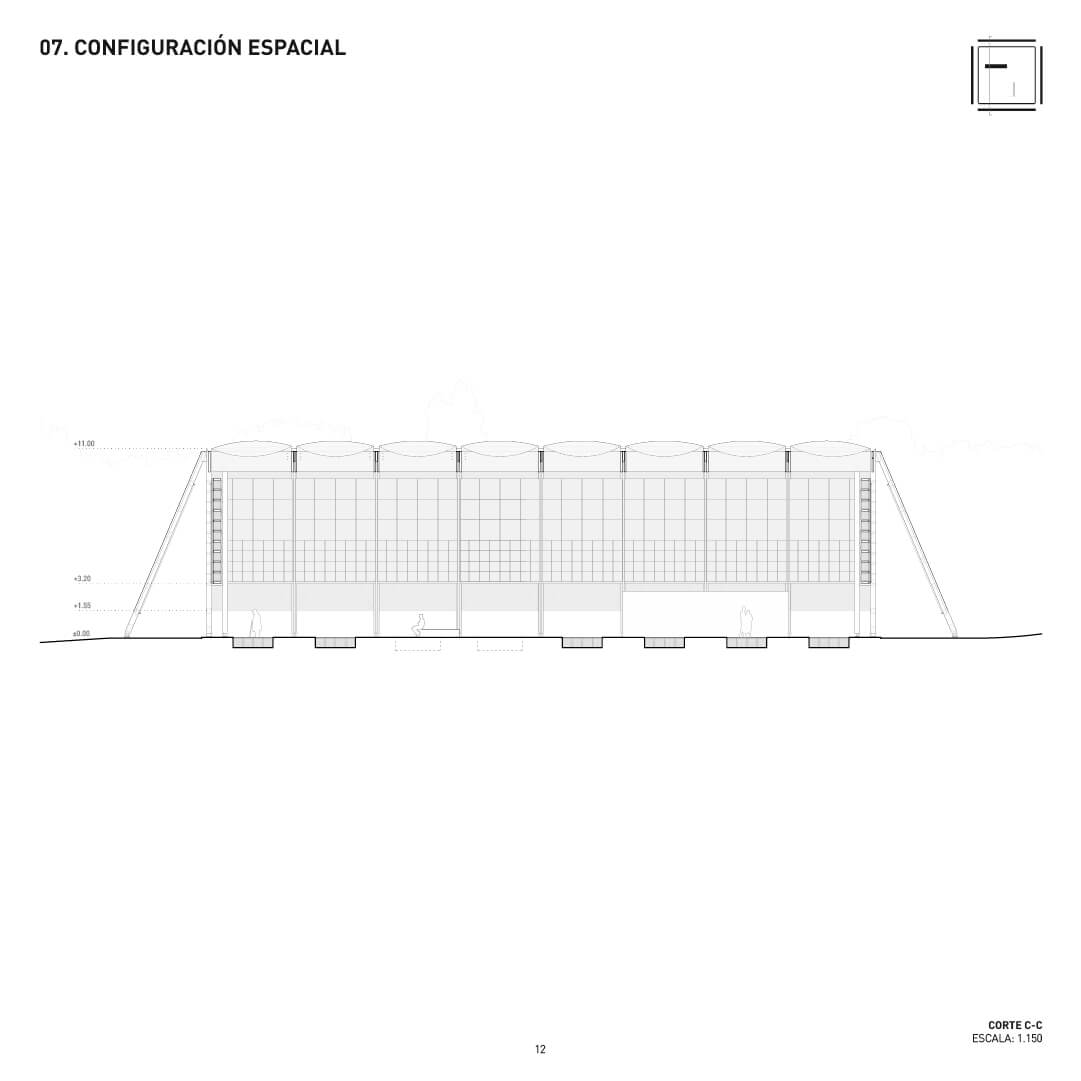 “Every refuge seems to be the construction of a temporary and spatial distance, theoretically invulnerable (…) The refuge is the last trunk where any life or an entire civilization opts”
Smiljan Radic

The need for a refuge is inherent to the human being, and can be seen in the concept of Laugier’s Primitive Cabin and the one described in Semper’s treatise (image), where both explore the origin of the architectural discipline. This idea of man’s primitive refuge has archetypes such as the hut, already mentioned, but also the tent, a fabric stretched over a light structure, the representation of an elemental refuge. It carries a very strong symbology about the nomadic, a way of life that has been part of the history of humanity since time immemorial, which, transferred to funerary architecture, poses an alternative perspective of death and the way it is faced. 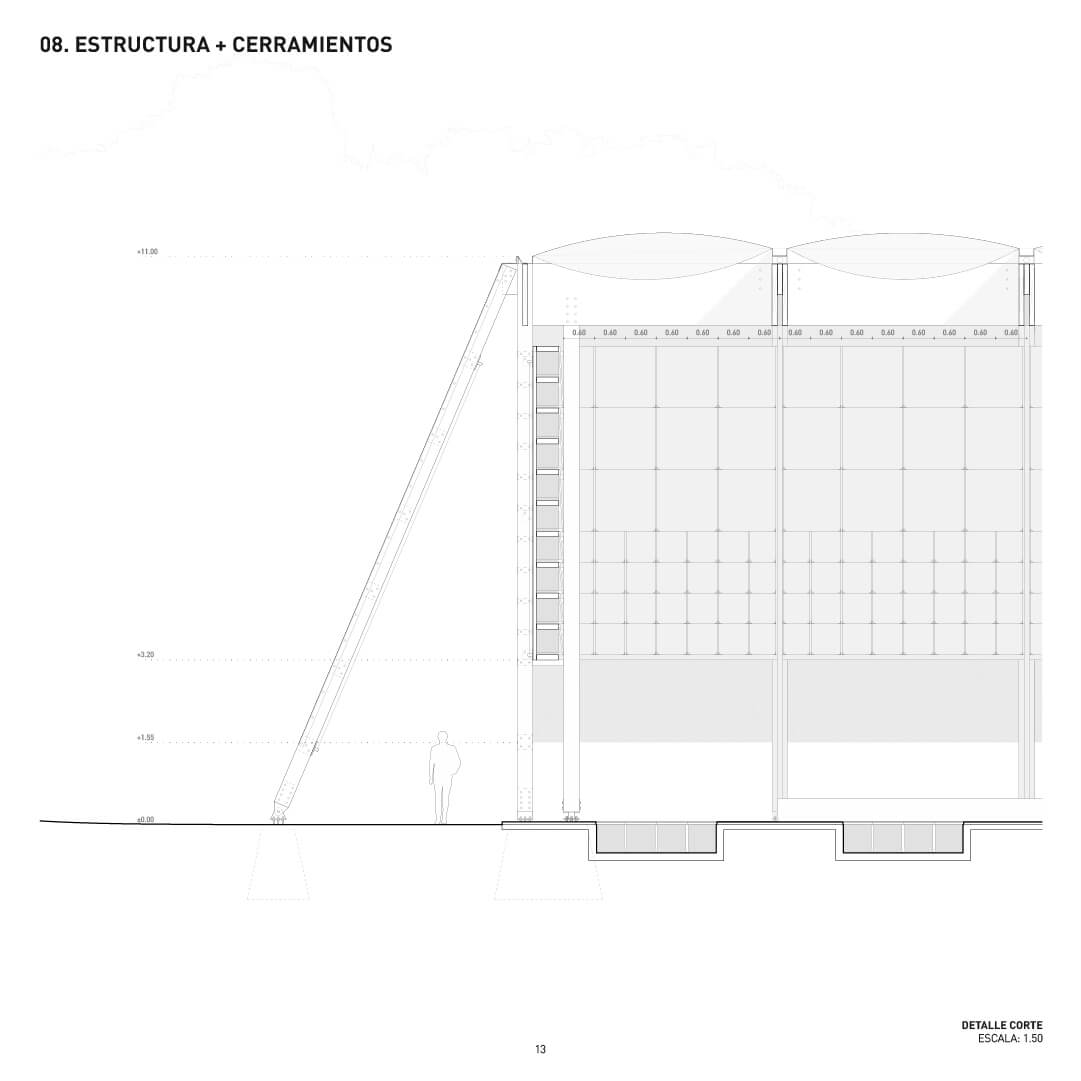 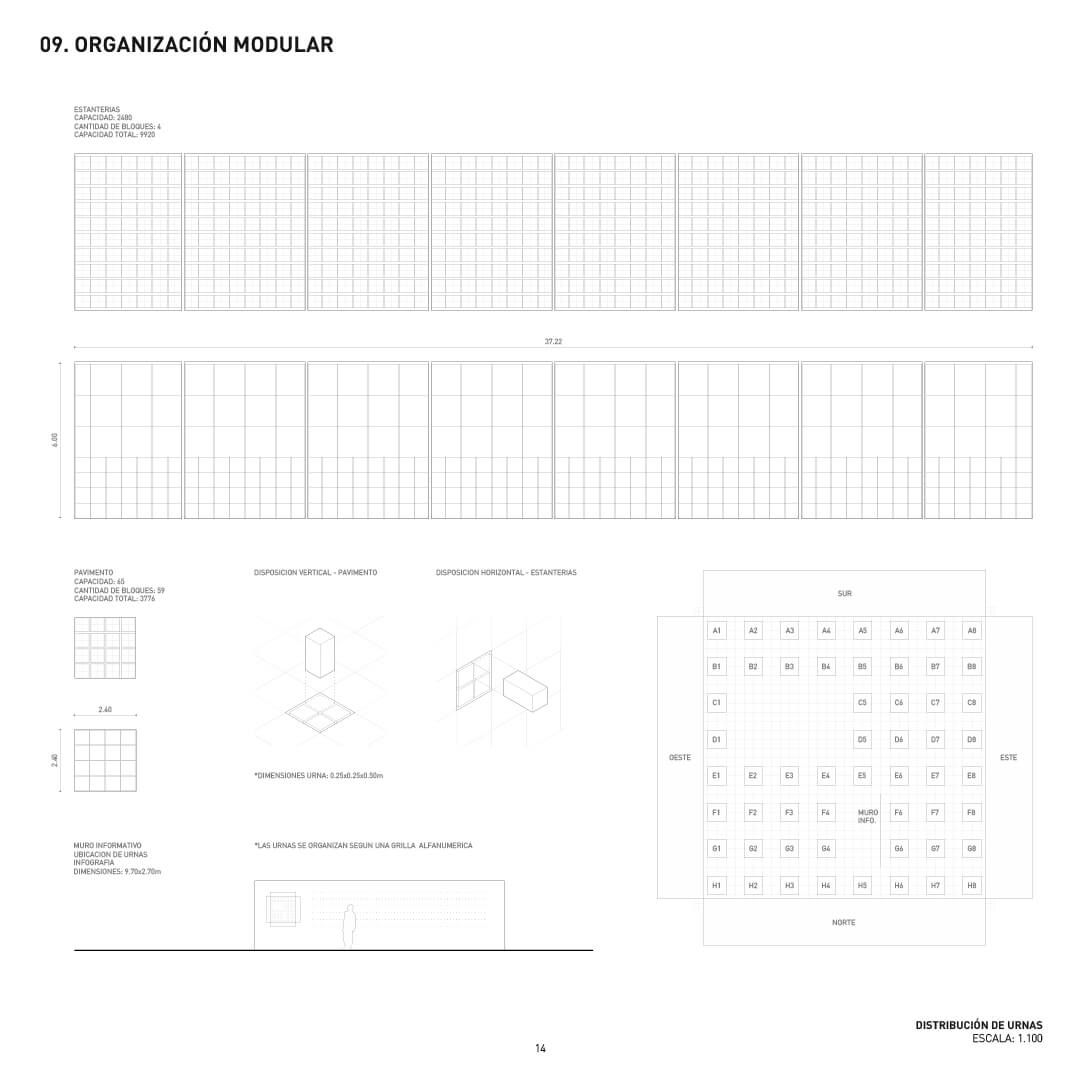 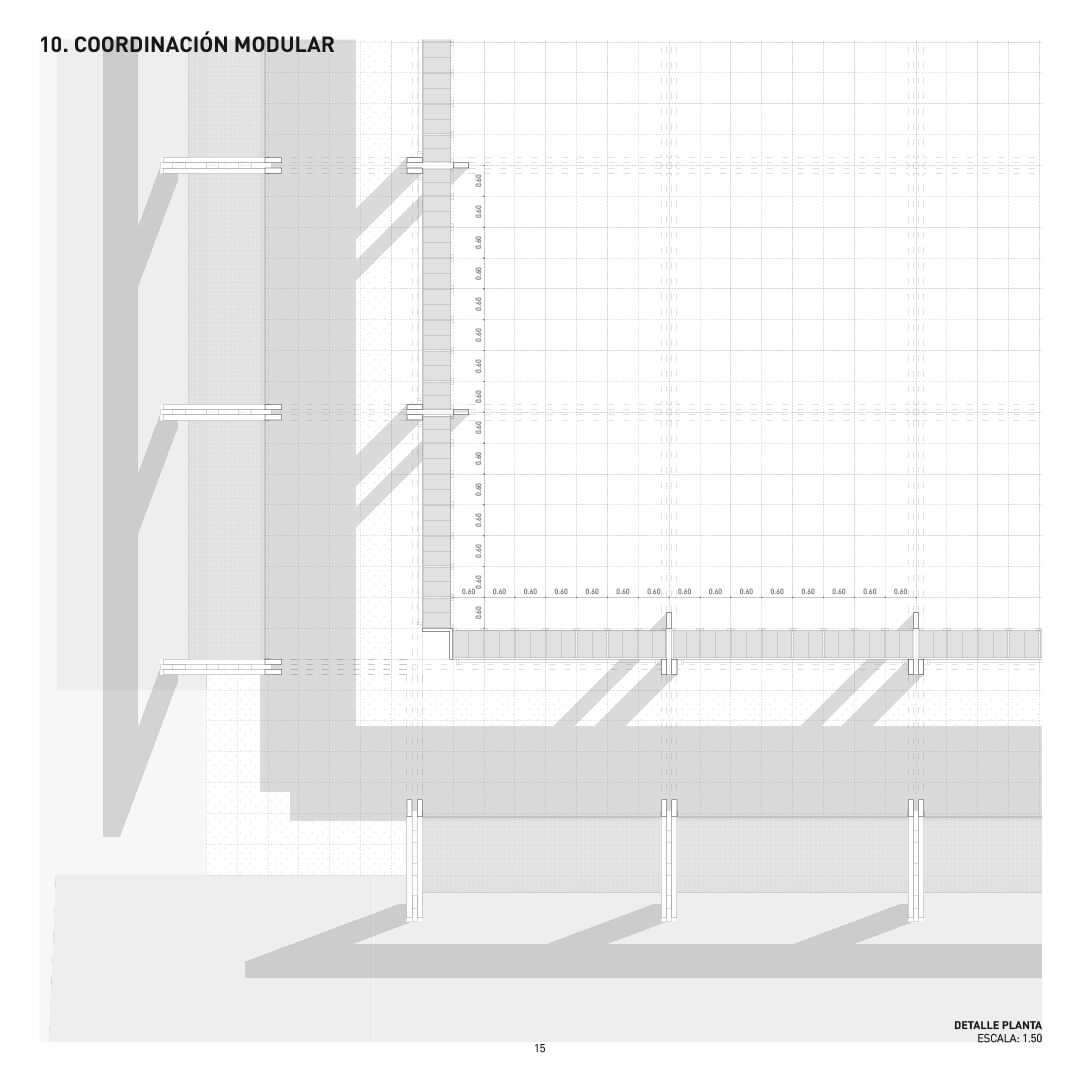 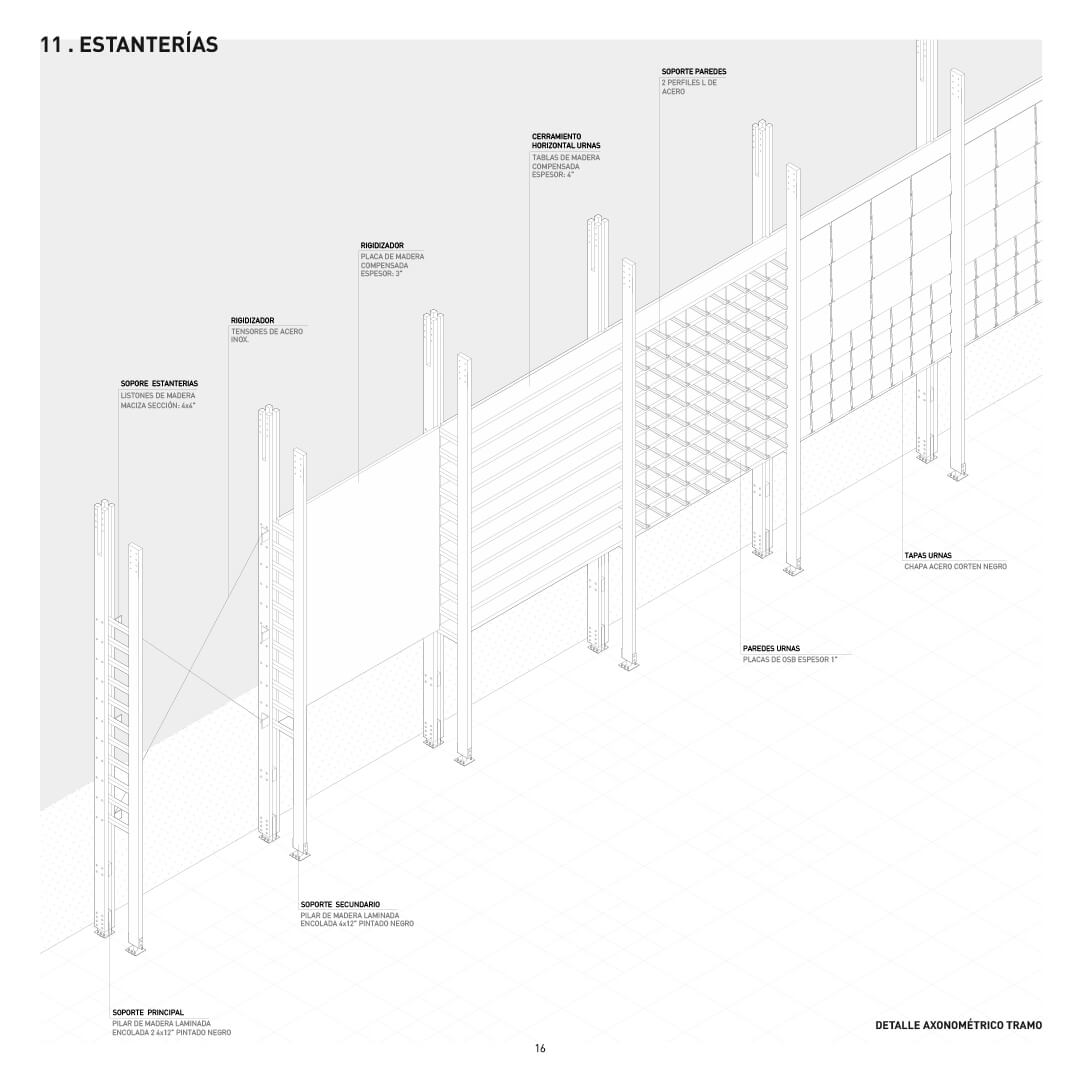 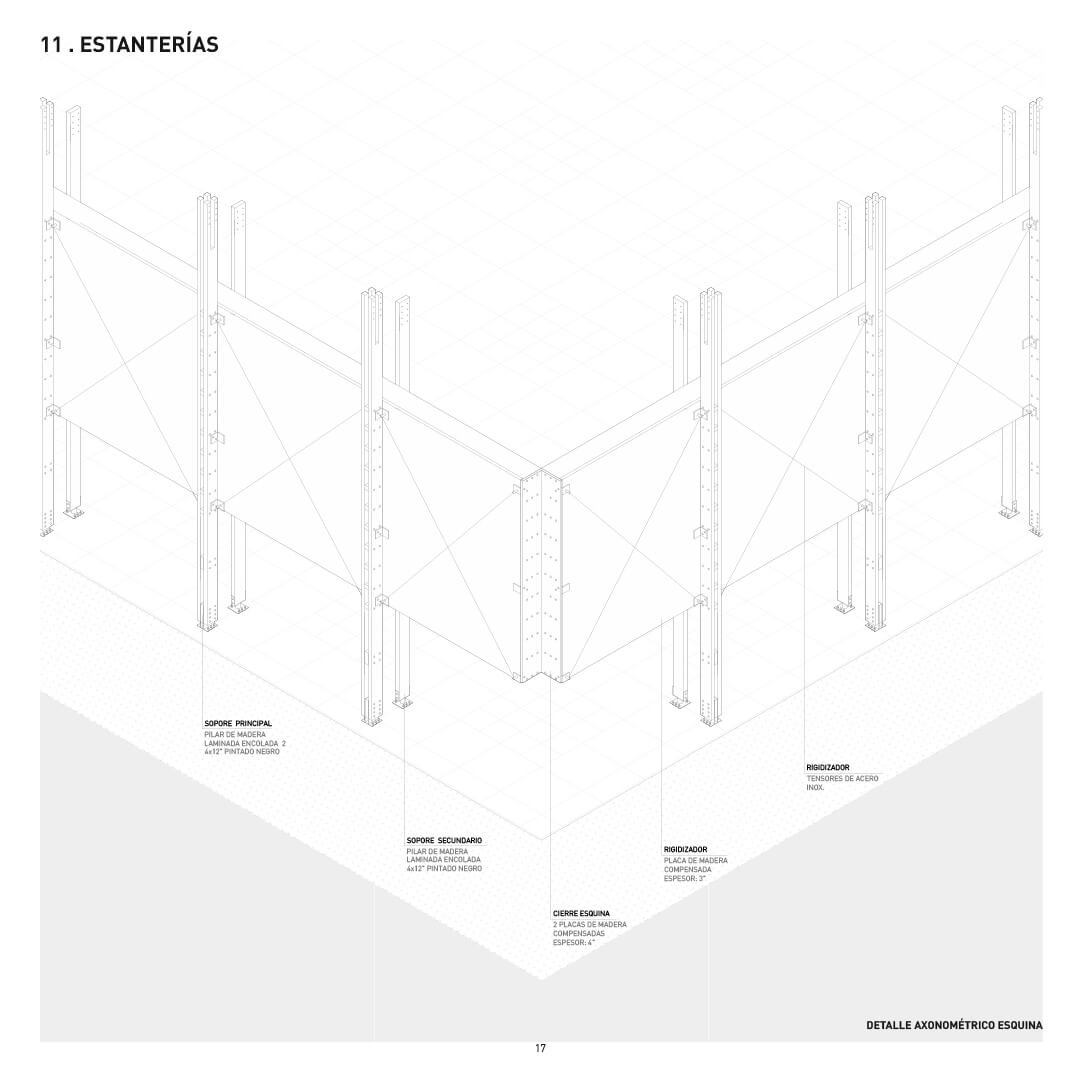 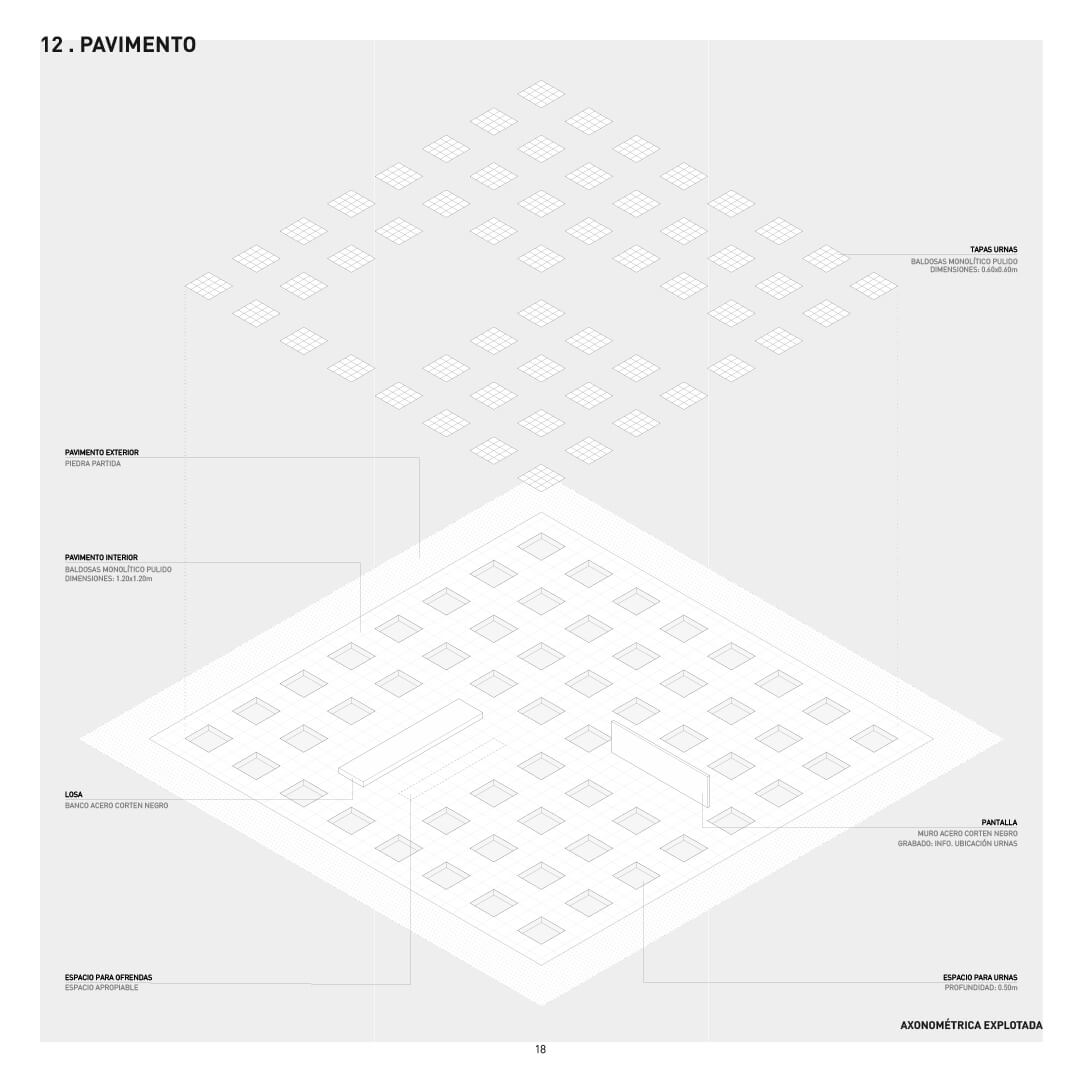 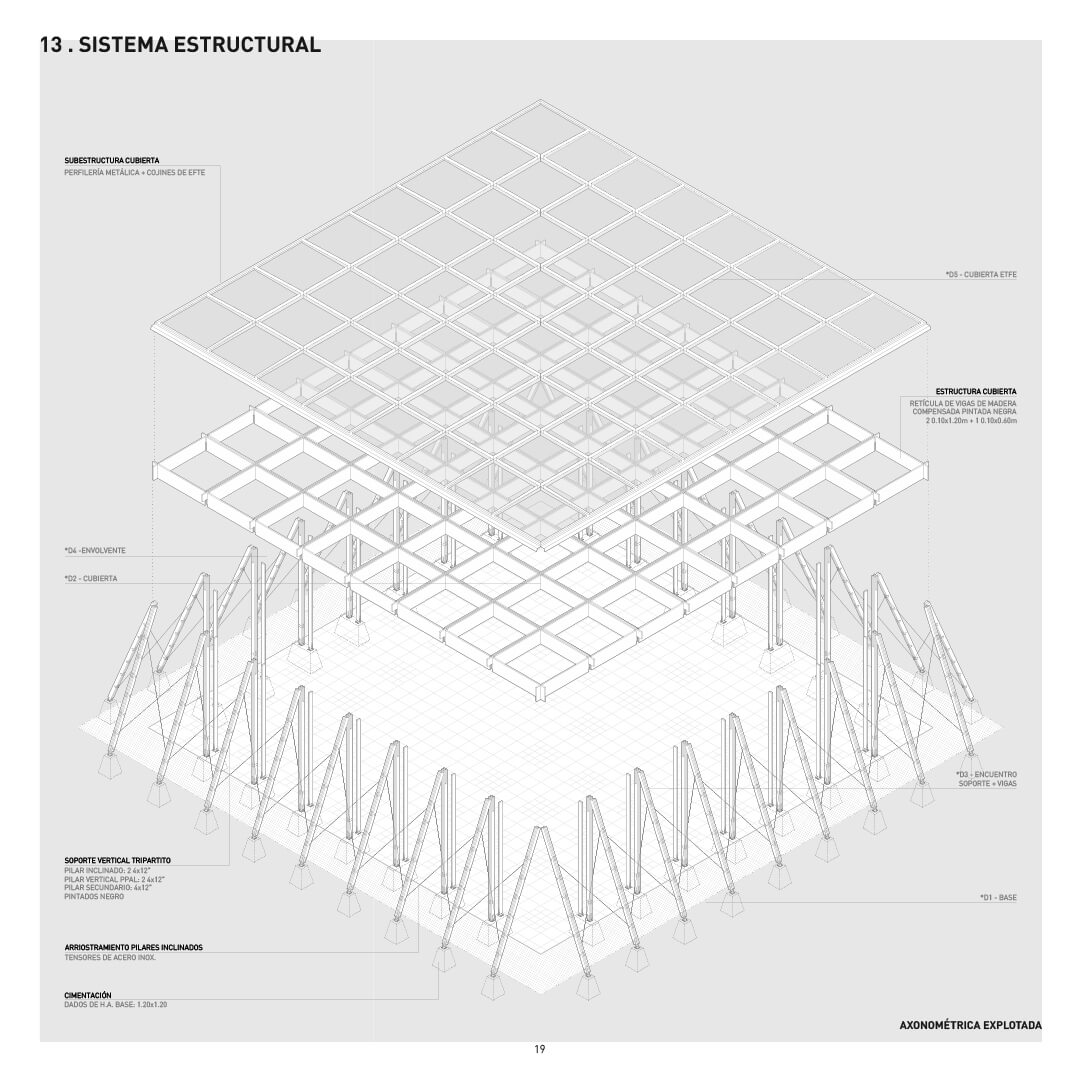 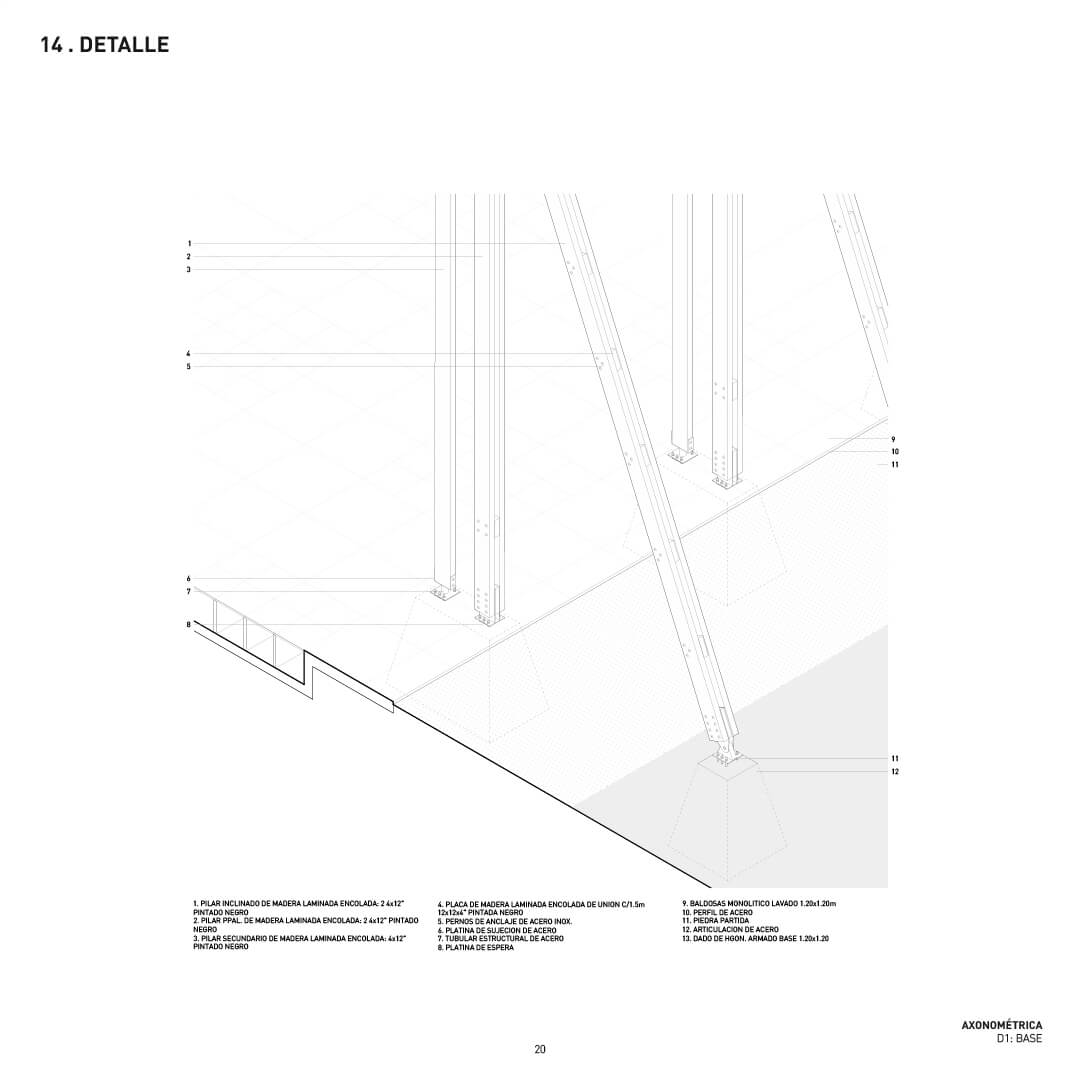 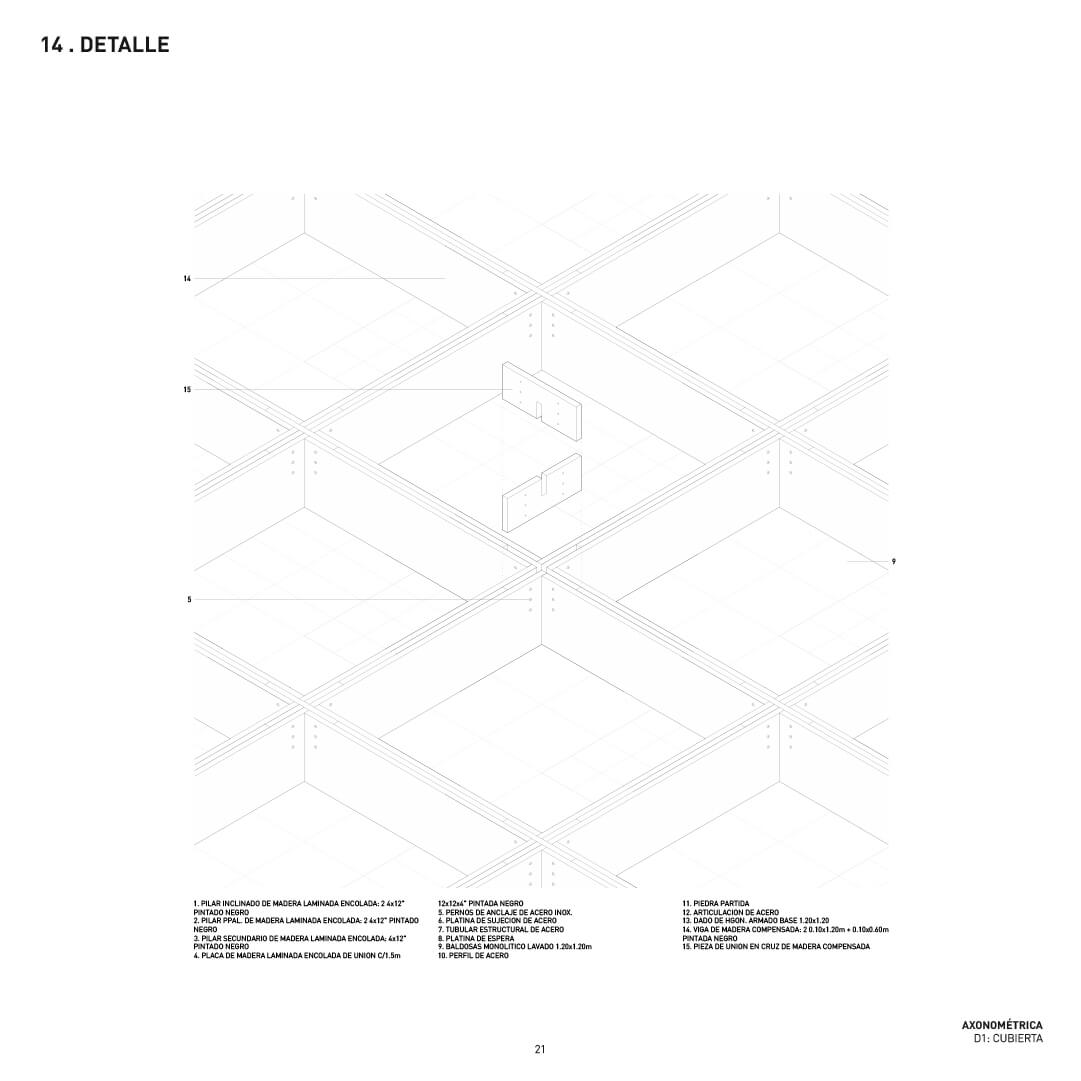 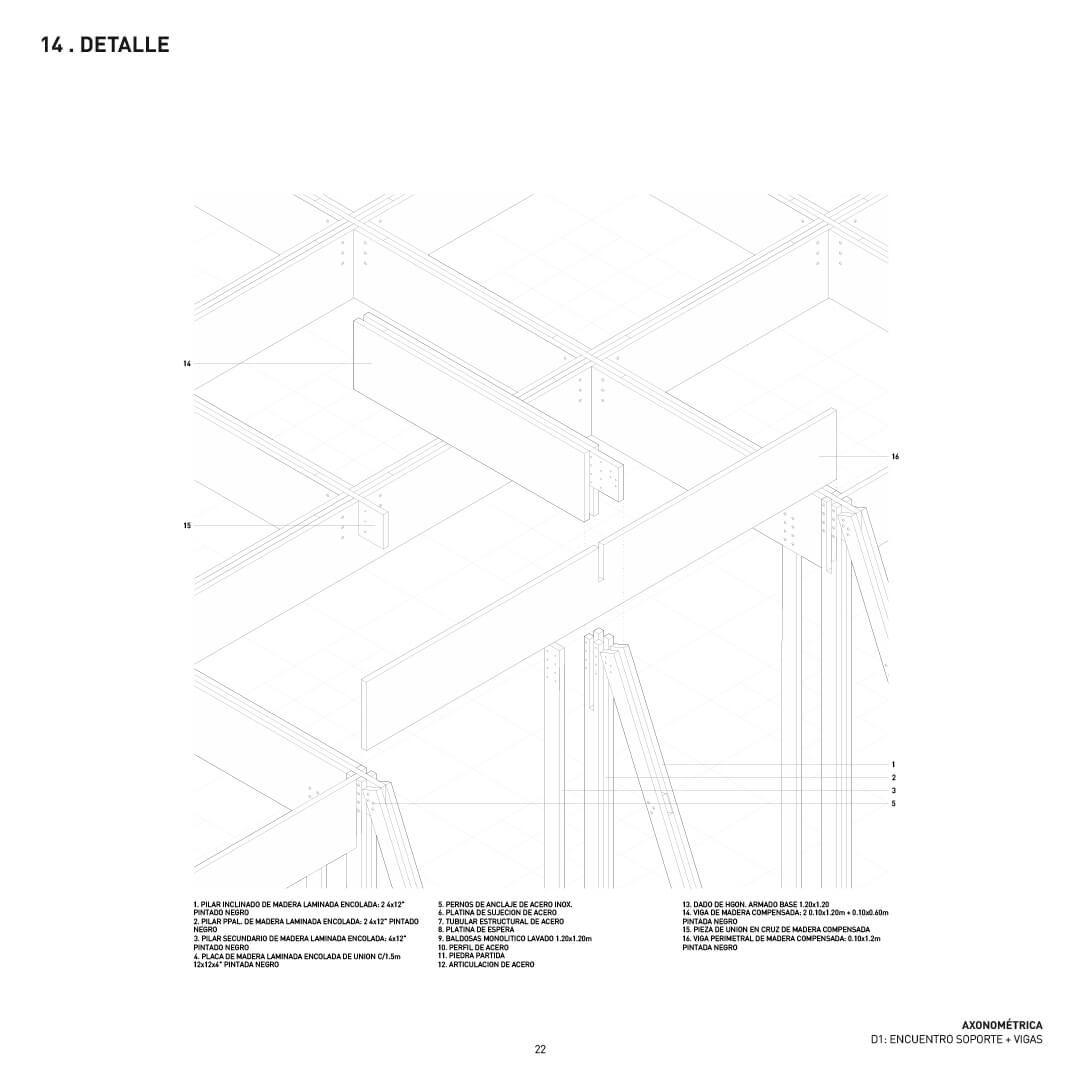 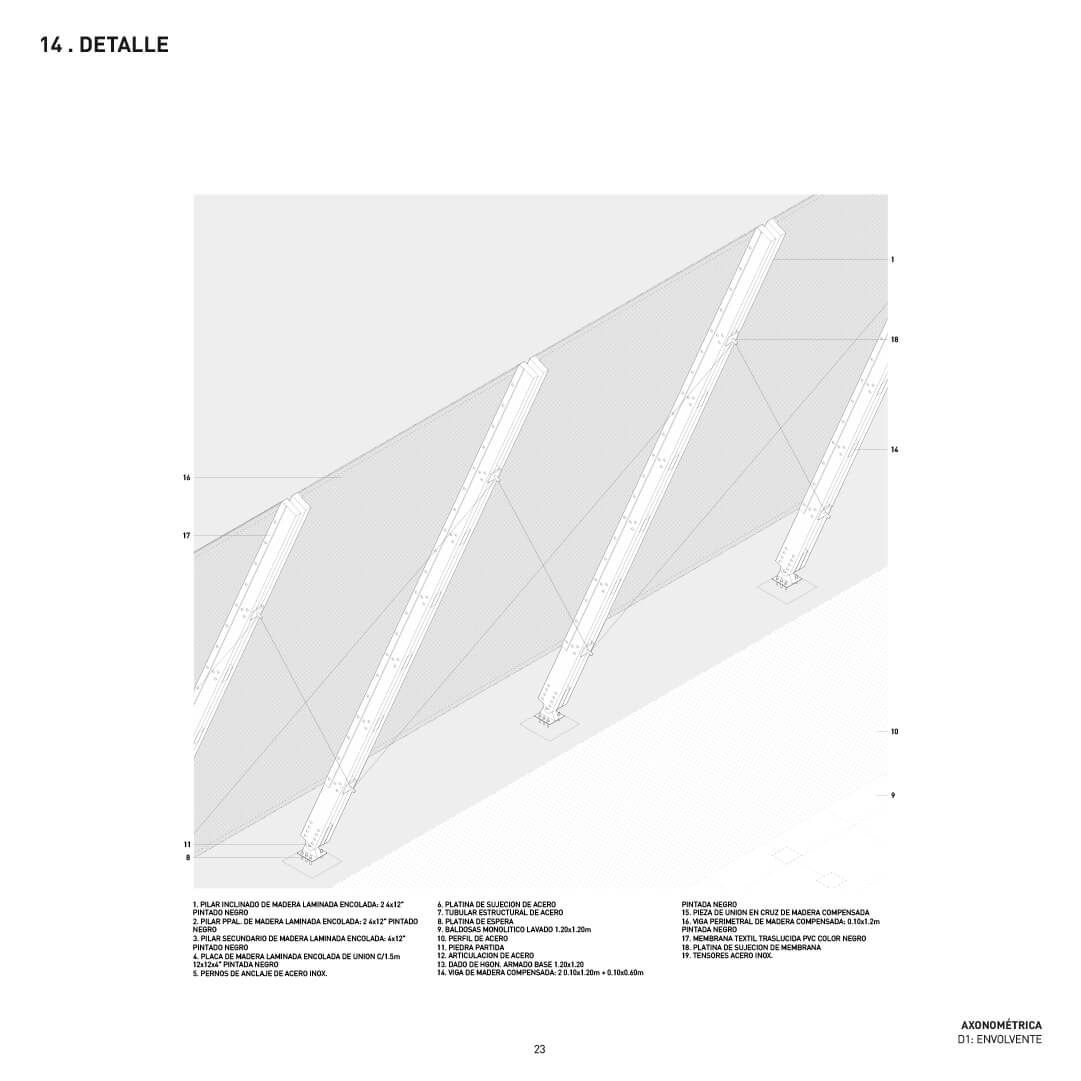 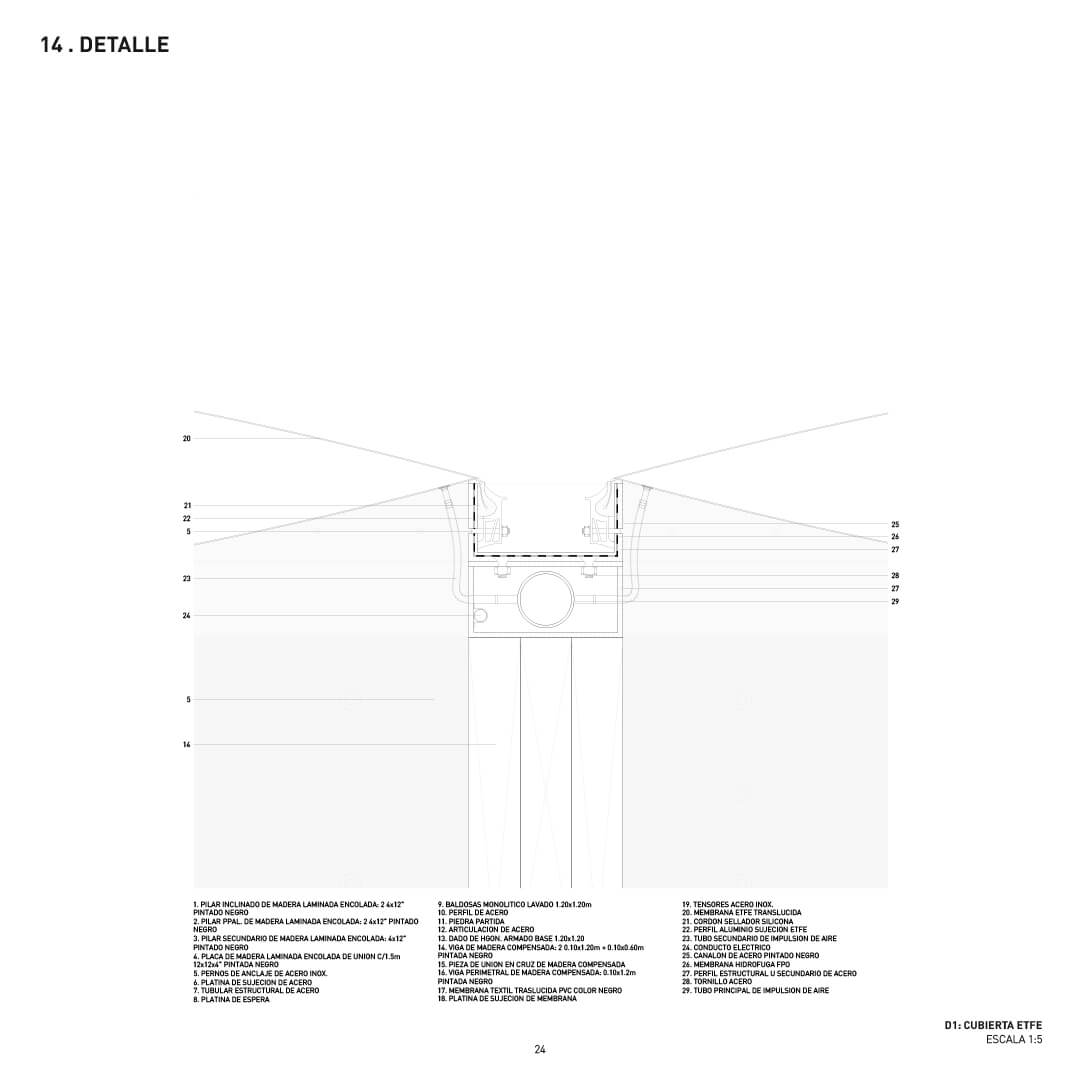 With lightness and austerity as premises, wood is chosen as the main structural element. The project is supported by a system of tripartite pillars that are repeated every 4.8m, made up of two vertical pillars: a main one of 0.30×0.30m and a secondary one of 0.30×0.10m, on which the racks of urns; and an inclined one, with the same section as the first, which seeks to rest on the exterior substrate and favors the plane where the envelope is held, a stretched canvas that ends up giving unity to the volume. Both the inclined pillars and the main vertical ones are stiffened with each other by means of metal tensioners and the racks themselves. As for the roof, it consists of a grid of 1.20×0.30 wooden beams that start at the meeting point of the main pillars, thus serving to join the four elements. The horizontal openings are closed with ETFE cushions, and the back of the beams is used to place the substructure of the system and the rainwater pipes. 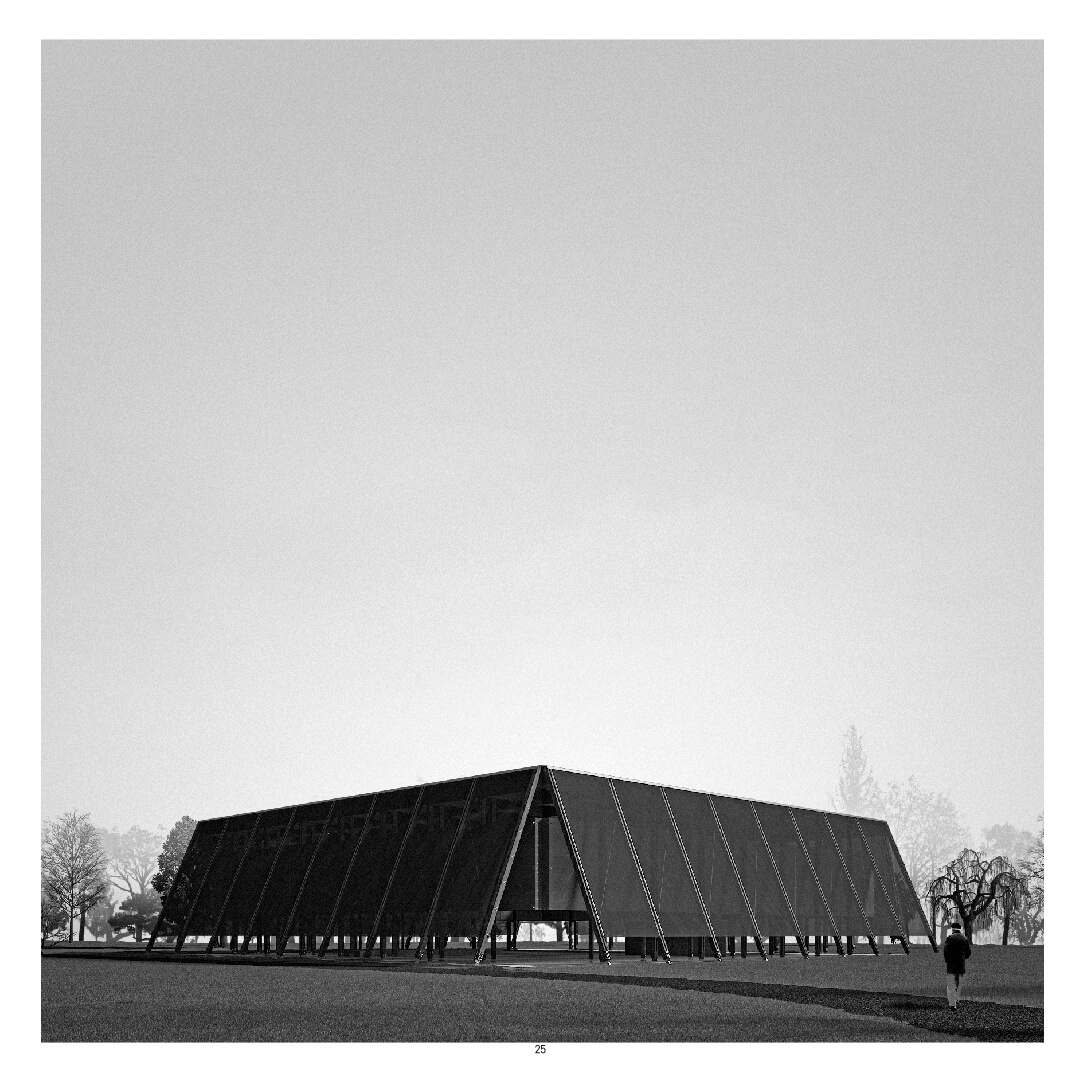 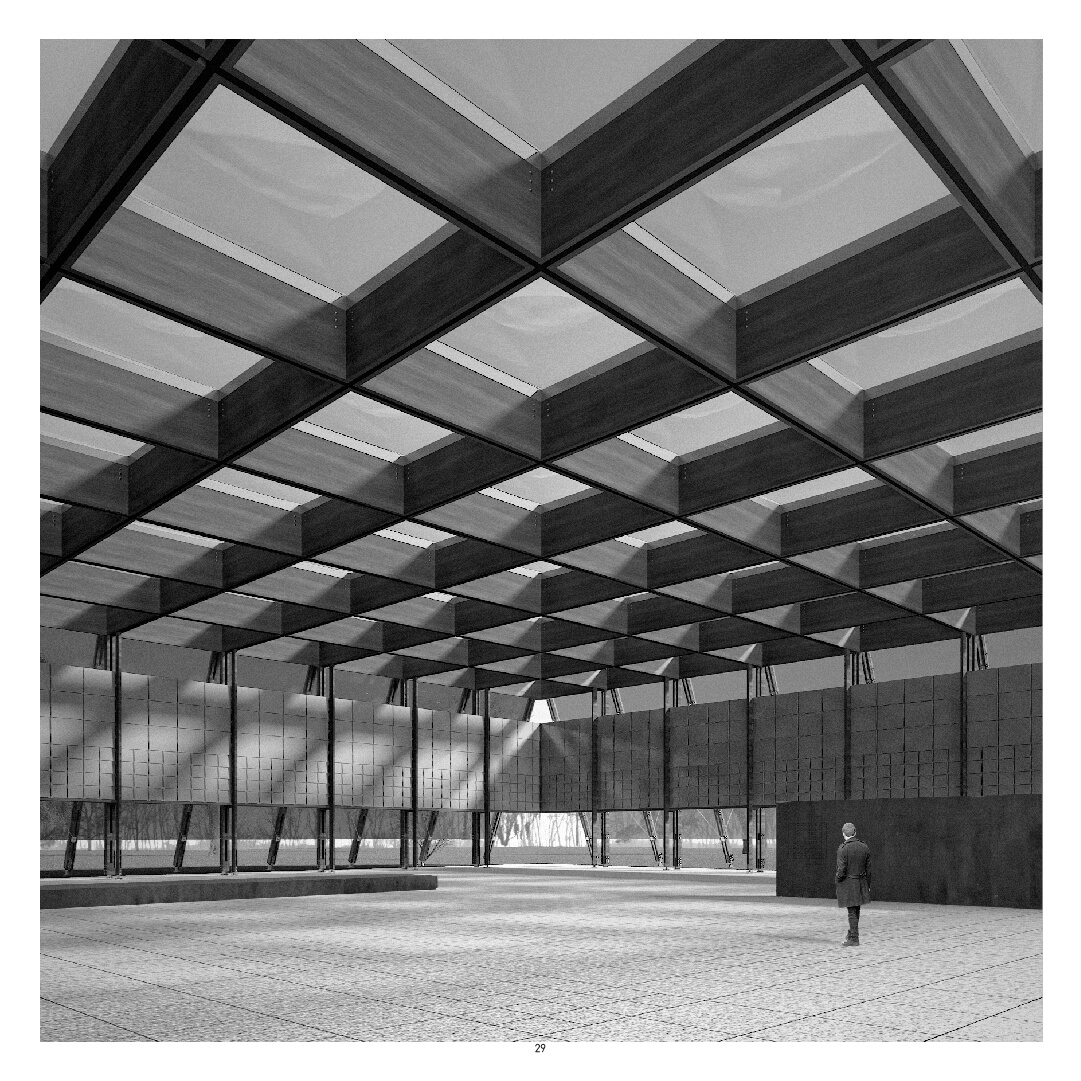 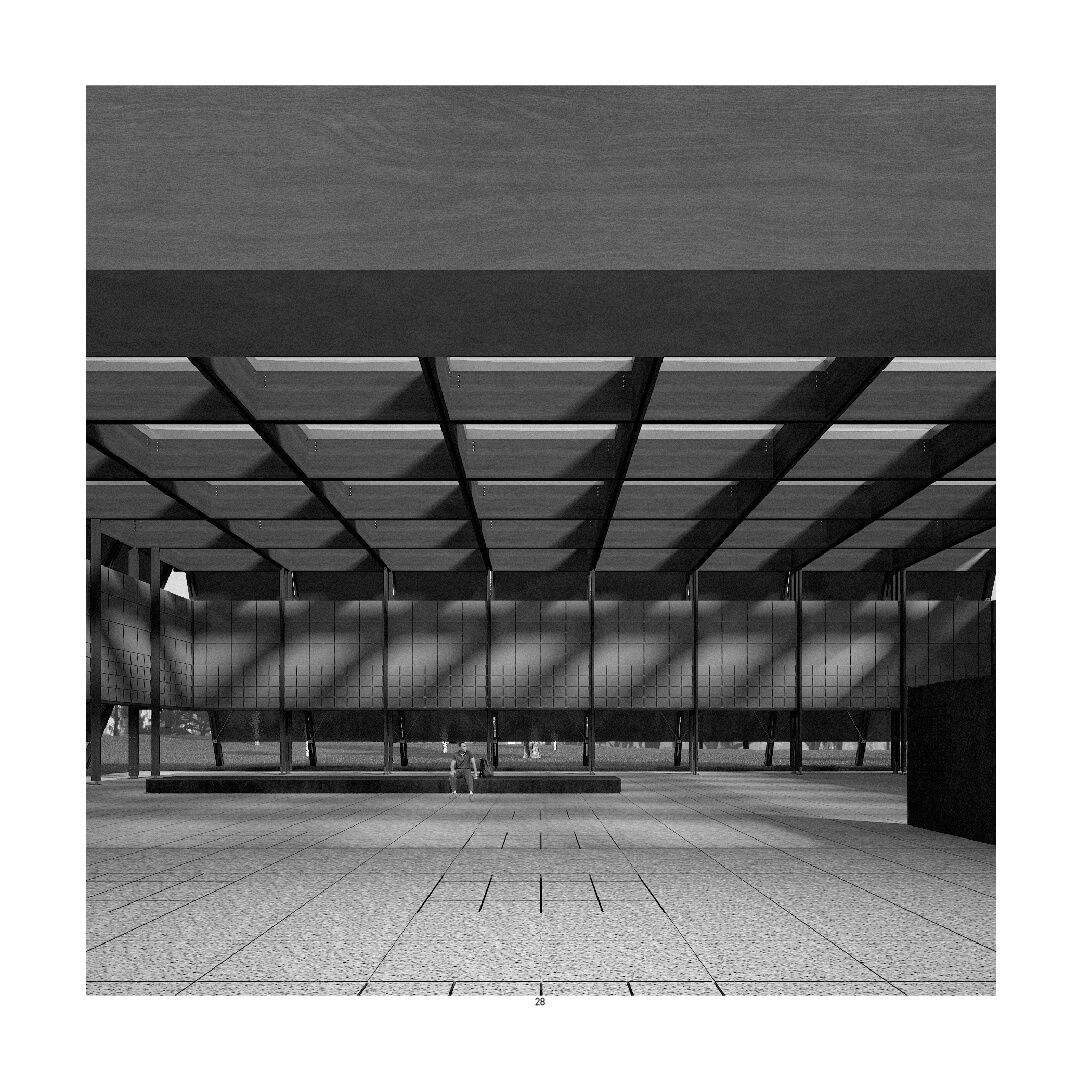 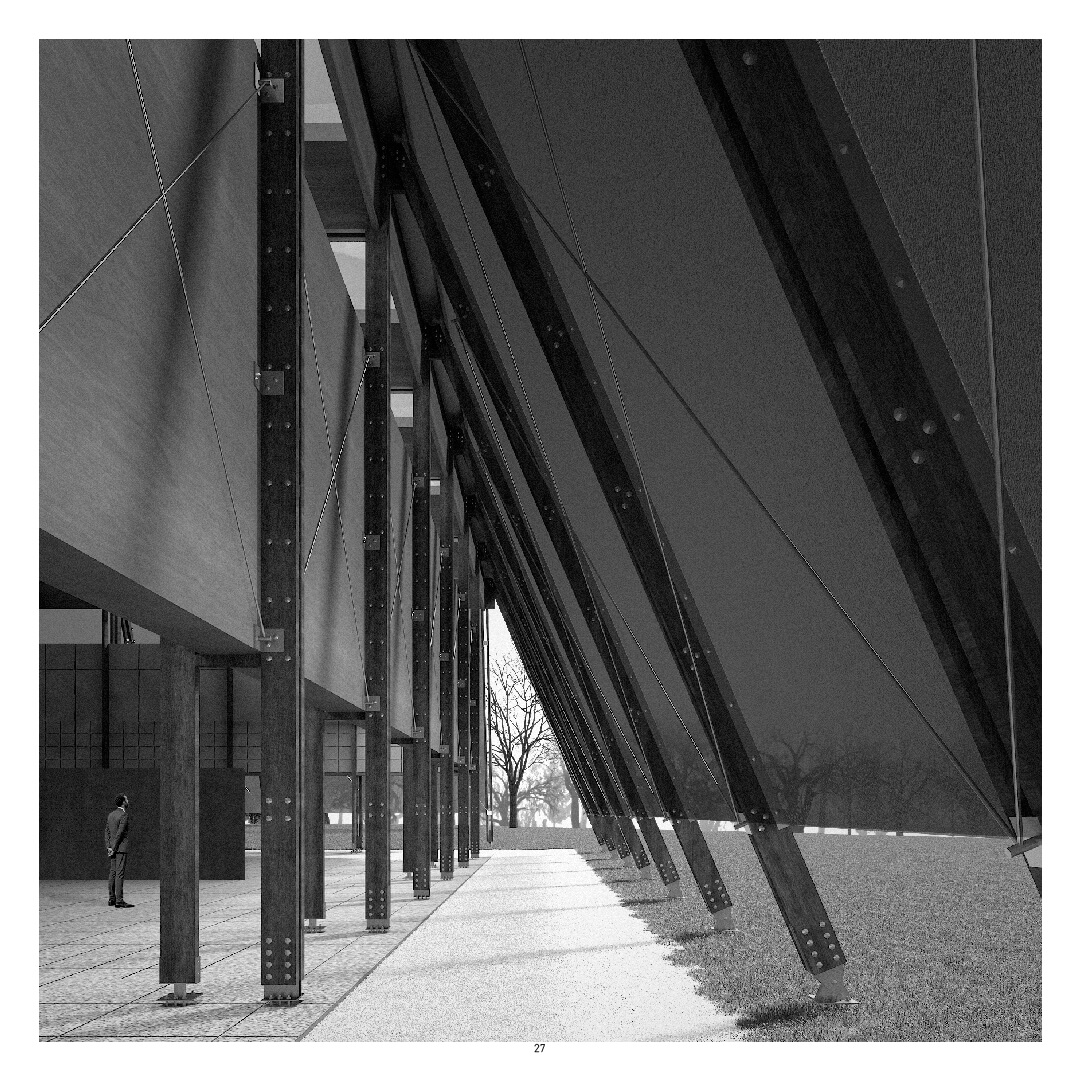 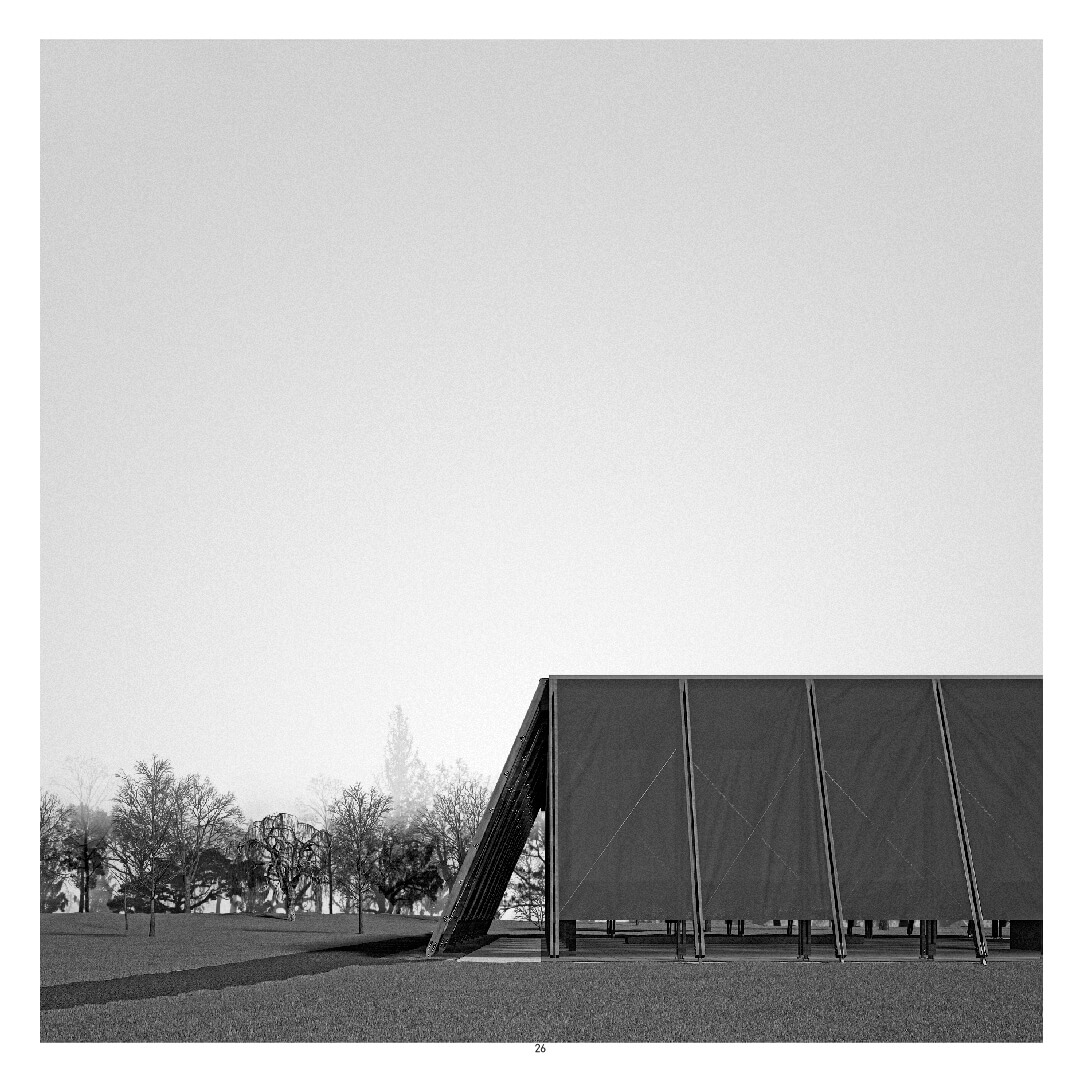 The proposal takes place in its entirety on a single level, a free ground floor that the only way it intervenes in the land is horizontalizing it. Access is through any of its 4 vertices where the canvas is interrupted and the vertical pillars are removed. Initially, a roofed gallery is accessed where a change in pavement is perceived, an environment of slight darkness emphasized by the pavement that transmits a singular sound and warns the user of the consequent spatial experience. After this first threshold, you enter the main space of the urinal, the space for the ballot boxes. They surround it forming a ring of shelves that is suspended and arm the interior facade, in turn they are part of the pavement emerging rhythmically in its breakdown. This large homogeneous space, completely emptied, is interrupted by two elements with sculptural characteristics: a slab resting on the ground, which serves as a bench and defines the space for offerings, and a screen wall, which receives users by providing directions; Both elements slightly break the rigorous existing symmetry and add scale to this large space.