There are only two factories of this type in France at the moment, this third would be for Maurs the opportunity to welcome new artisans and students who will find a boarding school associated with the lycée. This multiplicity of programs will be the means to expand Tissage Morin but will also give a real added value to this municipality specialized in the cultivation of flax. 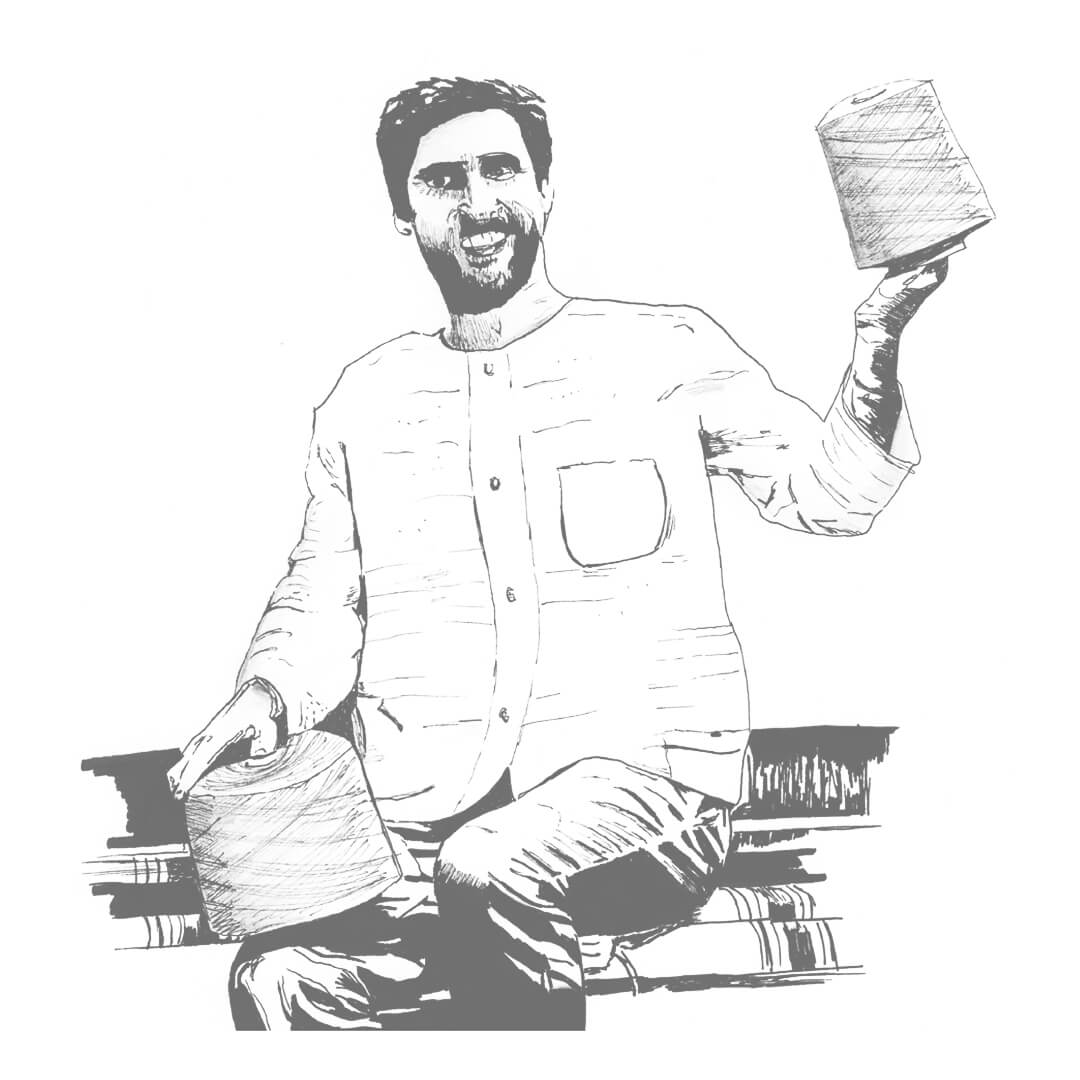 My name is François Morin, weaver from father to son in the Morin family business founded five generations ago in Aurillac. Here, we want to bring real recognition to this profession, its know-how and the authenticity of our traditional manufacturing method, emblematic of the territory. This is why I decided to extend the business to Maurs, which has been the symbol of flax production in France for several years. As a result, the company will develop a manufacturing center as well as a vocational high school for textiles to teach our know-how. There are only two in France at the moment, this third would be for Maurs the opportunity to host new artisans and students who will find a boarding school associated with the lycée. This multiplicity of programs will be the means to expand Tissage Morin but will also give real added value to this municipality specializing in the cultivation of flax. 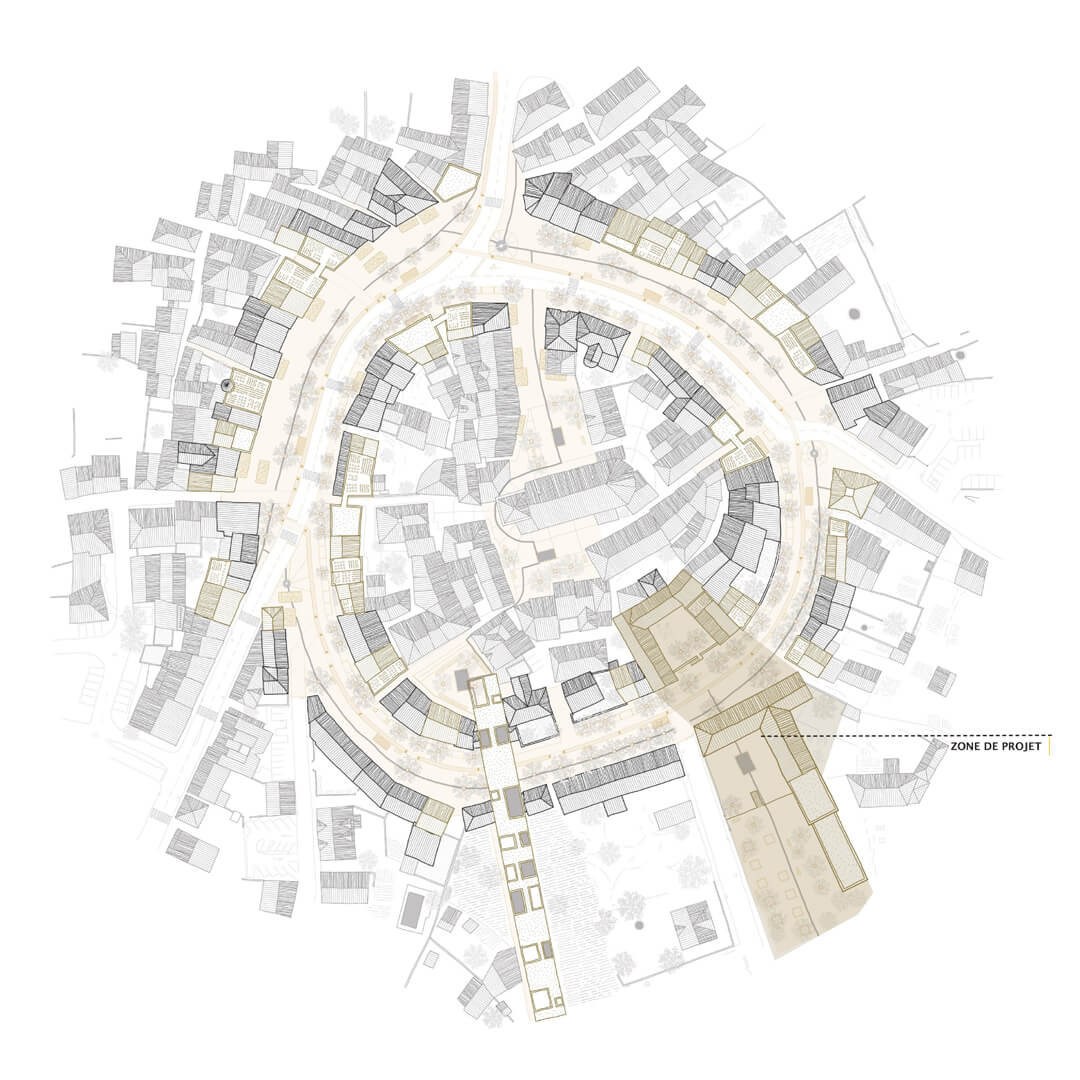 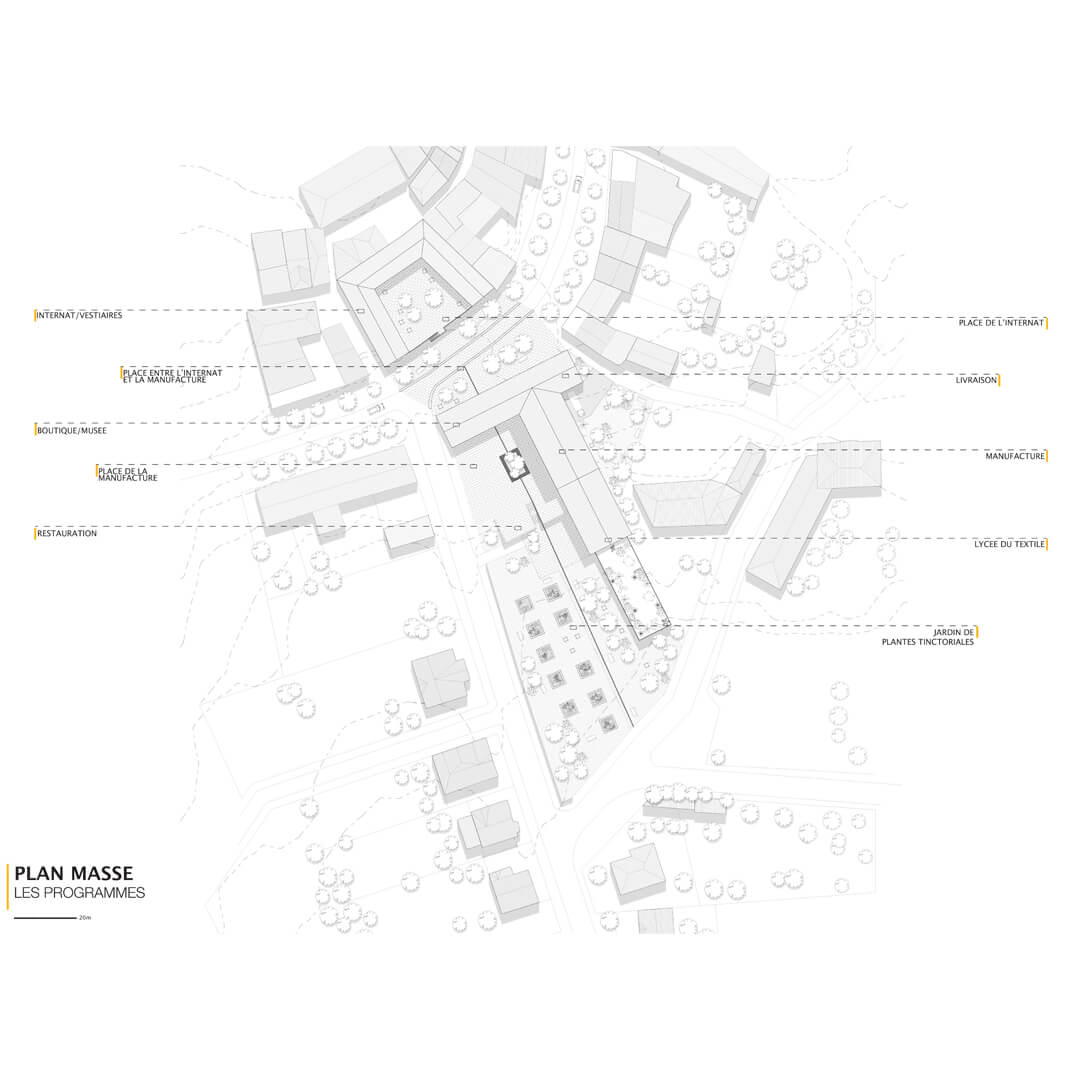 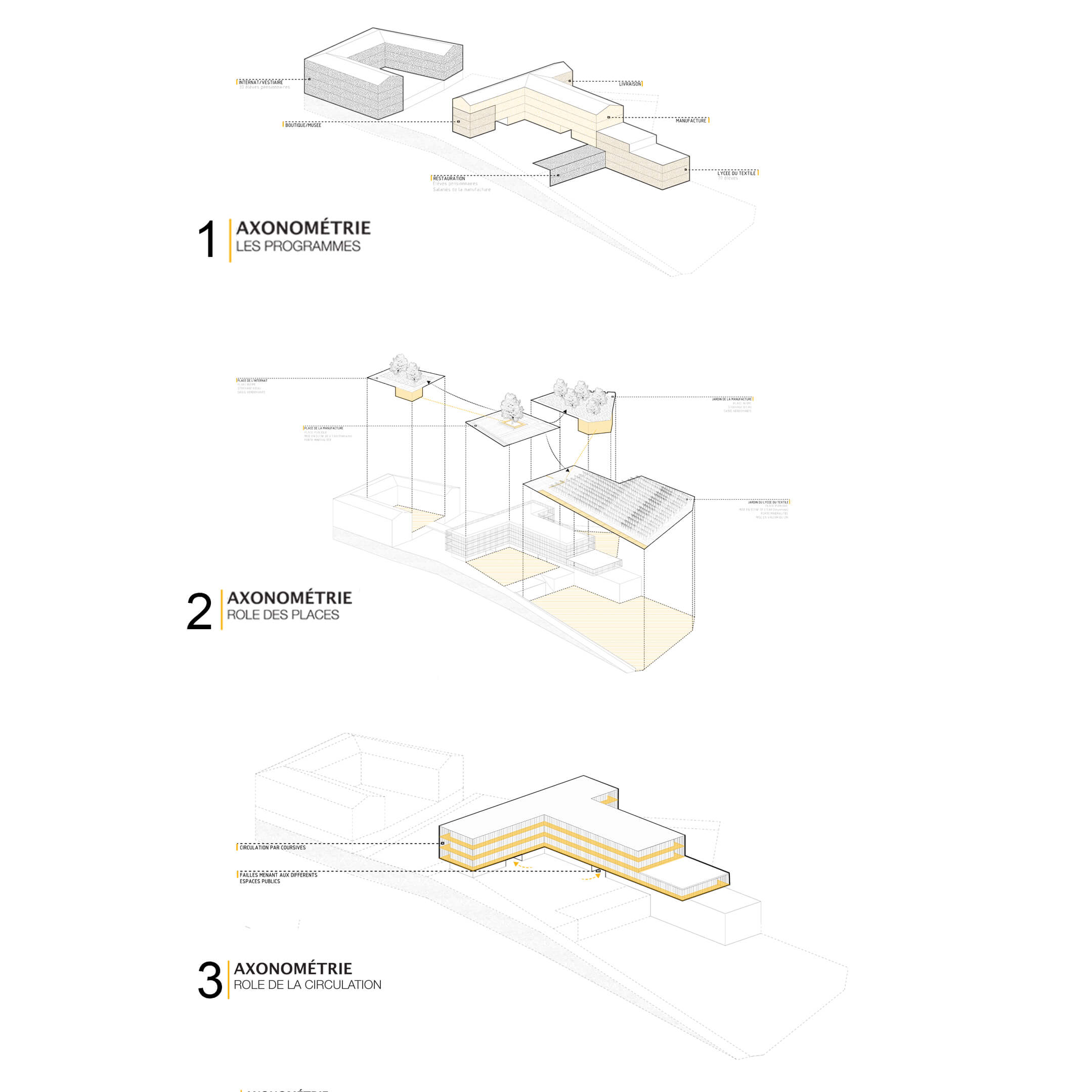 This system of passageways on the upper floors initially provides a covered space and shade at street level. The market finds its place, the stalls are sheltered. On the ground floor, there are massive blocks and stone. These blocks are independent of each other and offer free circulation. On the upper levels, these blocks can be read in another way, with a wooden post-beam structure, more wire-like. The blocks are linked here by passageways with a wooden framework to which a fabric mesh, linen hangs. The relationship between the street and the factory at this level allows transparency and a strong contribution of light within the workshops. In the hottest periods, this linen facade can get wet and therefore cool the whole building. 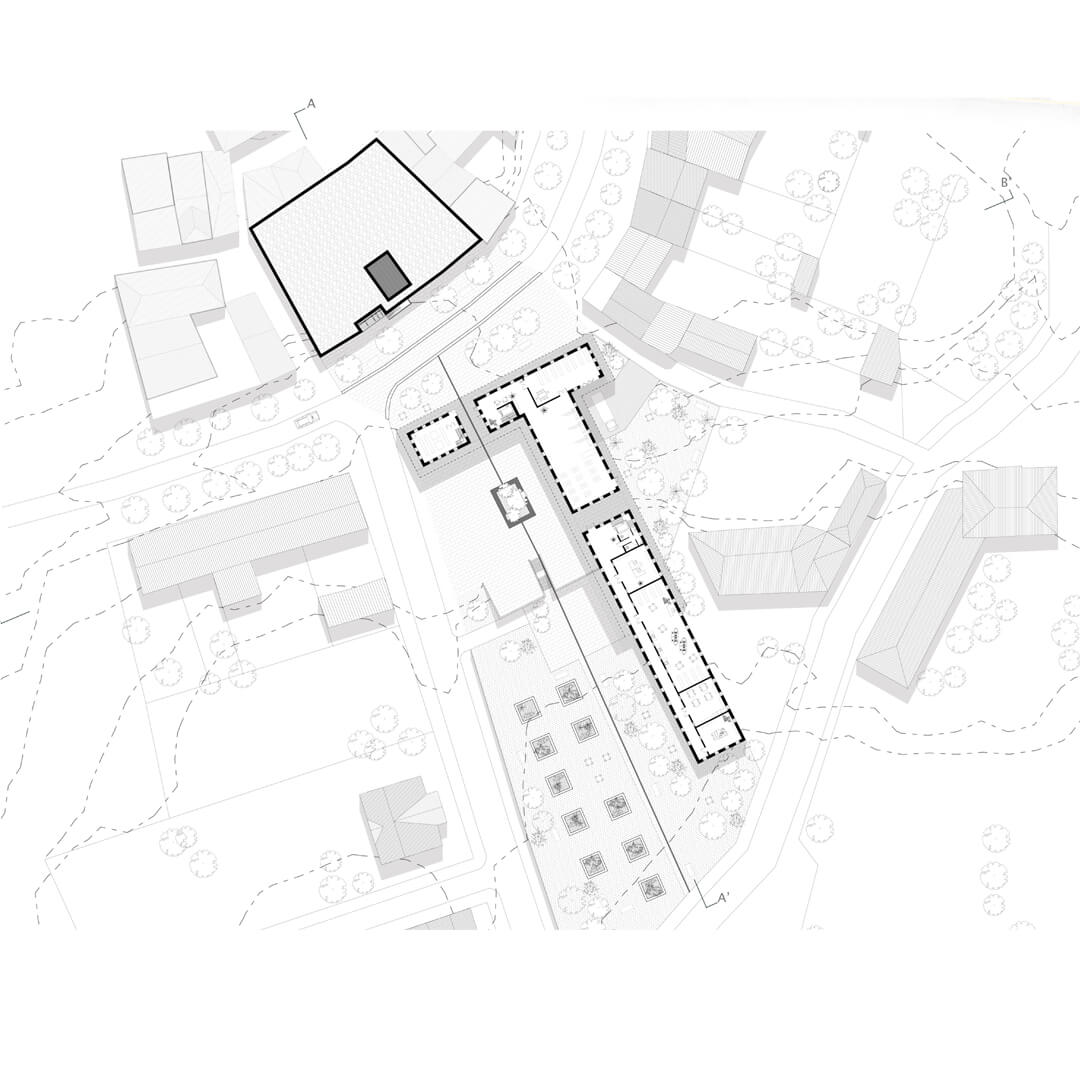 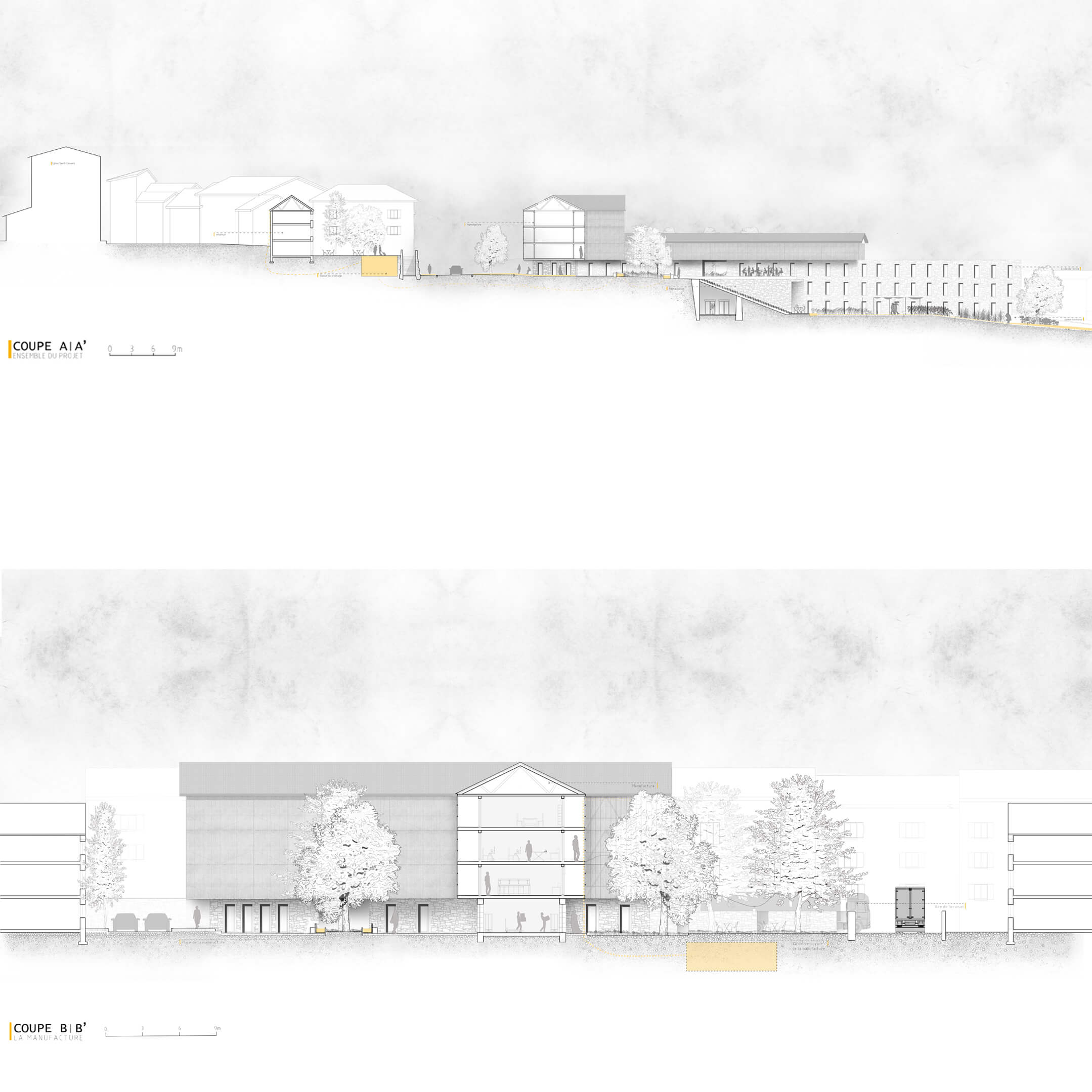 On the ground floor, you can find the blocks defining each program, with the high school, the factory as well as the boutique and the boarding school. These blocks allow free movement through the various places offered. The breakthroughs between the blocks are here visual and physical transitory spaces to move from one public space to another. At the boarding school level, there is the rainwater storage basin which serves the water channels in public spaces. 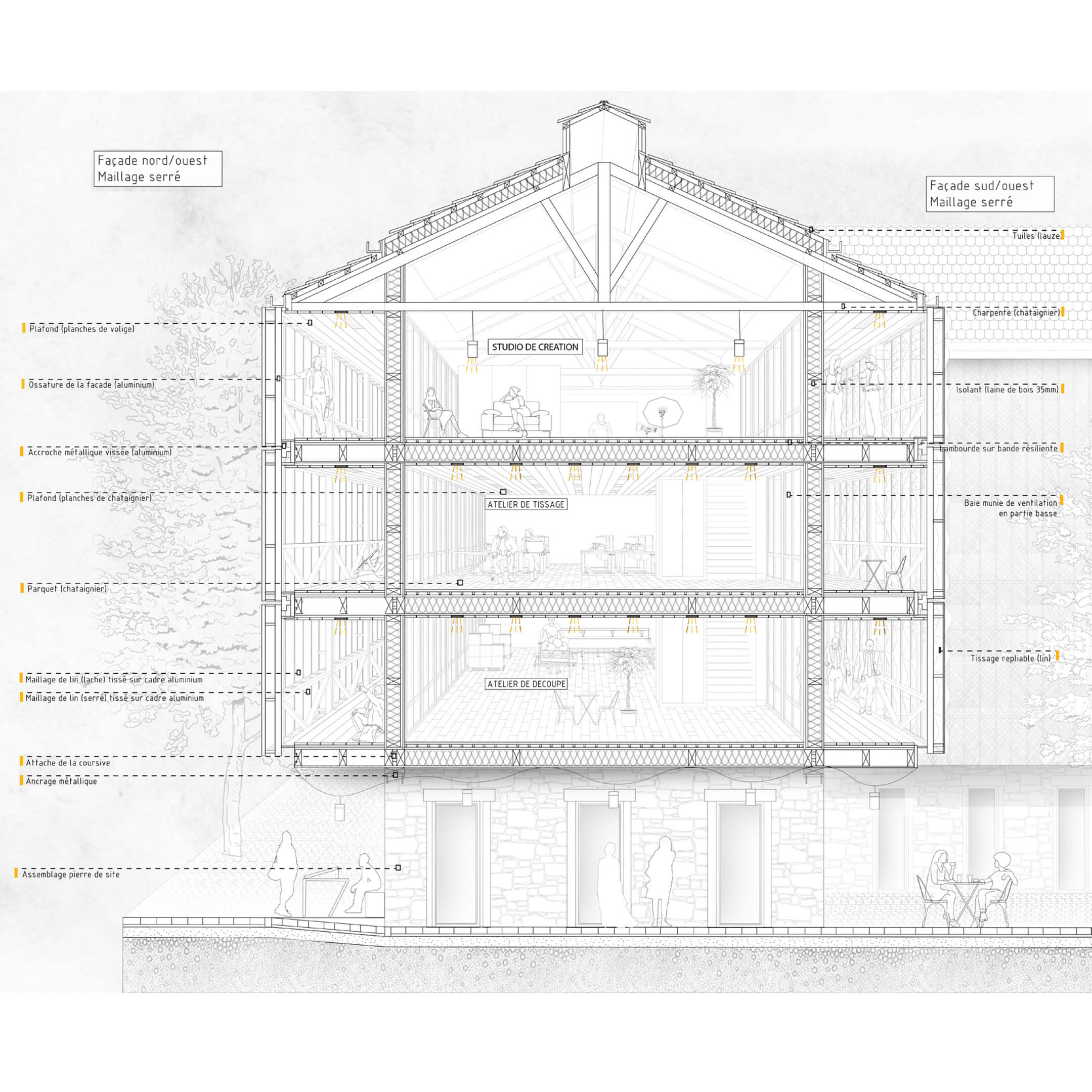 The topography of the site brought us a lot for the qualification of the different places within this project. And in particular for the treatment of water in these spaces. The rather private places, such as the courtyard of the boarding school or the garden of the factory, are spaces where water will be stored after having been collected from the roofs of the town center. This stock of water is done underground, the water only appears in public places. Indeed these basins are used to supply the channels of public spaces. In addition, the natural slope of the site allows running water along the project, serving a path from the street to the place of the factory, leading to the dye plant garden of the textile high school. 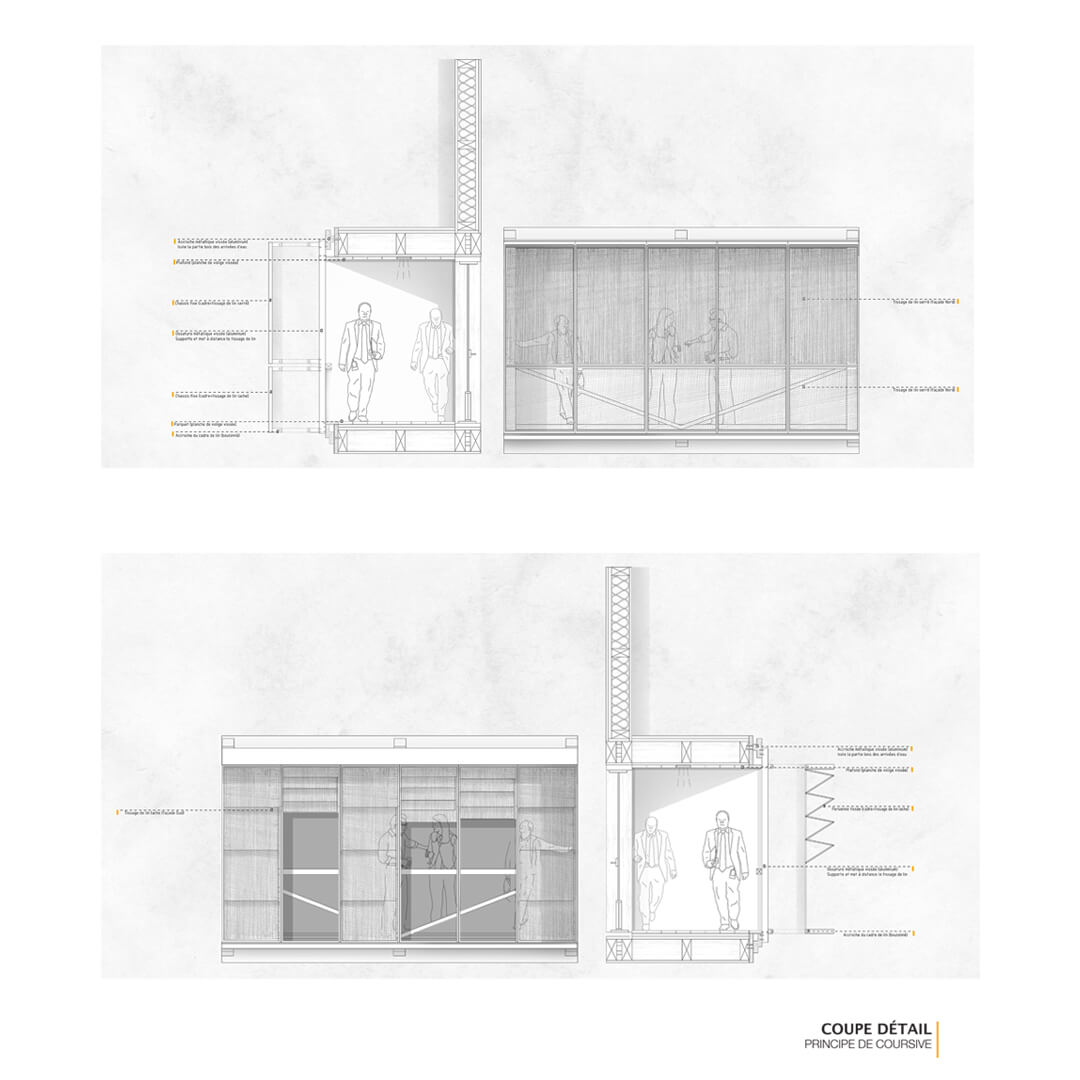 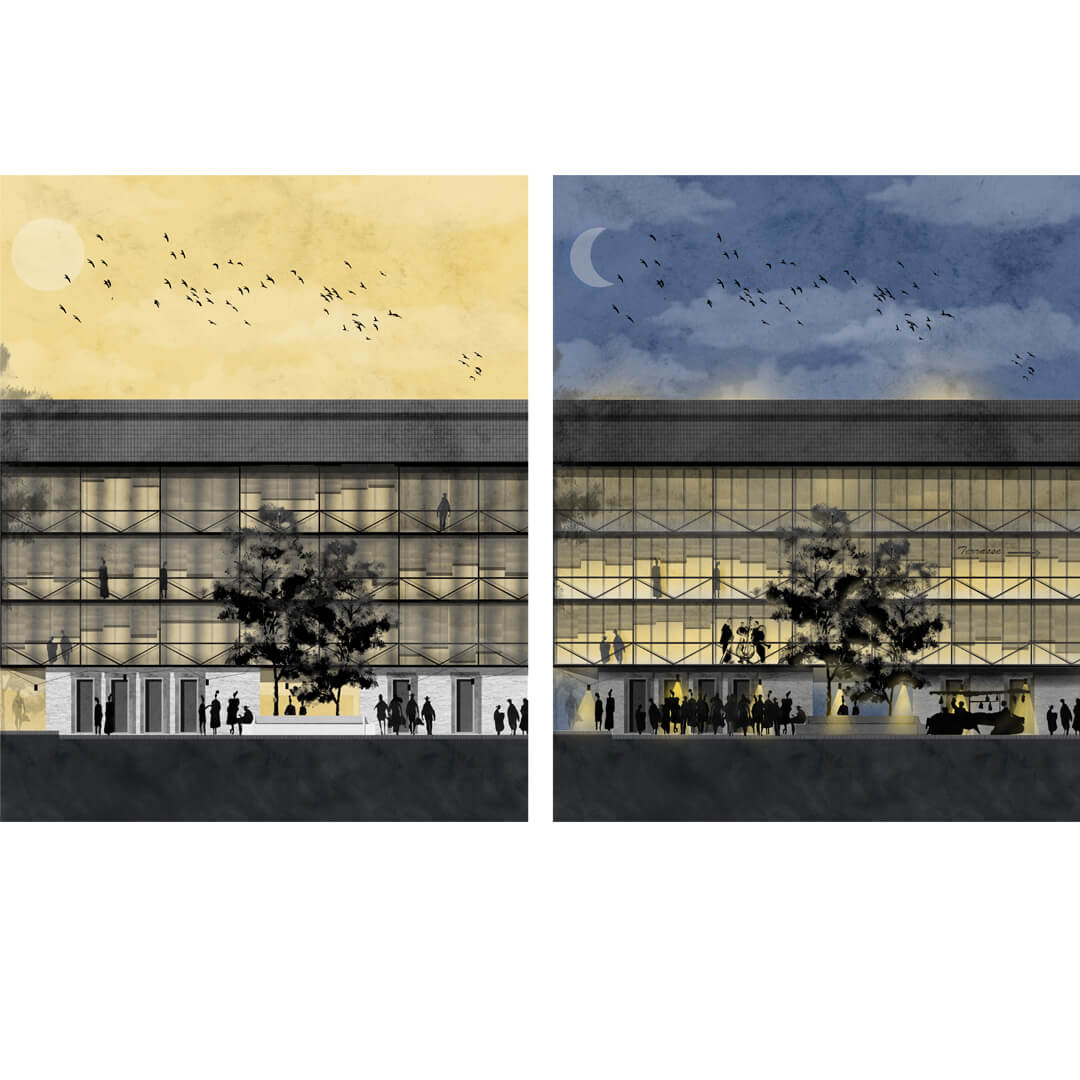 For these two moving facades, we have chosen to work with frames where the linen mesh is screwed more or less spaced with notches of 0.5 to 1 centimeters. For the North / West facade, on the street side, we first find a first frame acting as a railing along the passageway. This frame accommodates a loose mesh allowing good ventilation of fresh air. For the top frame, it is also a fixed frame but this time with a tight linen mesh, thus allowing ventilation to be controlled. For the South / East facade, on the Place de la Manufacture side, these are woven shutters. This removable facade system is used to ventilate the building but also to stage the Place de la Manufacture. In fact, in the early evening, these corridors host shows / concerts. This space is then used for several uses depending on the time of day and this curtain facade system can meet the different needs of users.